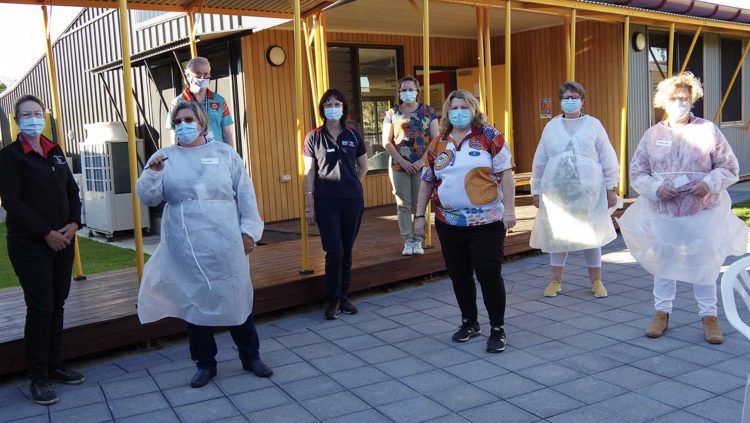 Rushed efforts to halt the alarming spread of COVID-19 in Aboriginal communities in western New South Wales will fail if they do not have cultural safety at their core.

Responses that are not culturally safe will risk adding to vaccine hesitancy and disengagement with public health orders and add to the trauma experienced by Aboriginal people amid a public health emergency, they told Croakey.

Donna Murray, CEO of Indigenous Allied Health Australia (IAHA), said there are “huge risks” in “shipping out” mainstream health teams that have not worked before in Aboriginal and Torres Strait Islander communities or done cultural safety training.

Failure to understand Aboriginal and Torres Strait Islander ways of “knowing, being and doing” often ends up in non-Indigenous people and services making uninformed judgements or blaming communities “and then that turns people off being vaccinated”, she said.

“That person who has a bad experience with testing, they’re not going to go back and get vaccinated,” said Murray, who is a descendant of the Wiradjuri and Wonnarua peoples of the Murrumbidgee River and Hunter Valley.

Health authorities are “only going to get one chance” to boost vaccinations to help stem the current NSW outbreak, she said.

“The real risk is, if they’re not culturally safe, then that just adds to the hesitancy,” he said. “The AMSs have to be at the forefront of this.”

An additional 23 cases were recorded in the region overnight, taking the total number of cases there to 139, across Dubbo, Mudgee, Narromine, Gilgandra, Bourke, Broken Hill and Wilcannia. Most are Aboriginal people, with nearly half aged under 25 years.

It’s the biggest and most worrying outbreak in Aboriginal communities since the pandemic began.

Aboriginal and Torres Strait Islander communities and peoples have been hailed internationally for their efforts which meant that, up until this outbreak, they were six times less likely than non-Indigenous Australians to contract COVID-19.

However, low vaccination rates in NSW have put Aboriginal people and communities at grave risk.

Shadow Federal Minister for Indigenous Australians Linda Burney said rates are as low as two percent in some smaller areas, and that critically low rates across the state and in Queensland “shows that the Prime Minister’s rhetoric about First Nations people being a priority in the vaccine rollout is completely empty”.

Aboriginal health and community experts are largely welcoming additional “boots on the ground”, given the urgency.

But they say soldiers will also likely be confronting and frightening for many Aboriginal and Torres Strait Islander people who have been harmed by state authorities and services in the past, with land and children stolen and memories of the Northern Territory Intervention.

They say that external teams need to work closely with Aboriginal communities and leaders on the ground, but there’s concern that some communities have not yet been alerted to any deployment, as the Walgett-based Dharriwaa Elders Group tweeted this week. 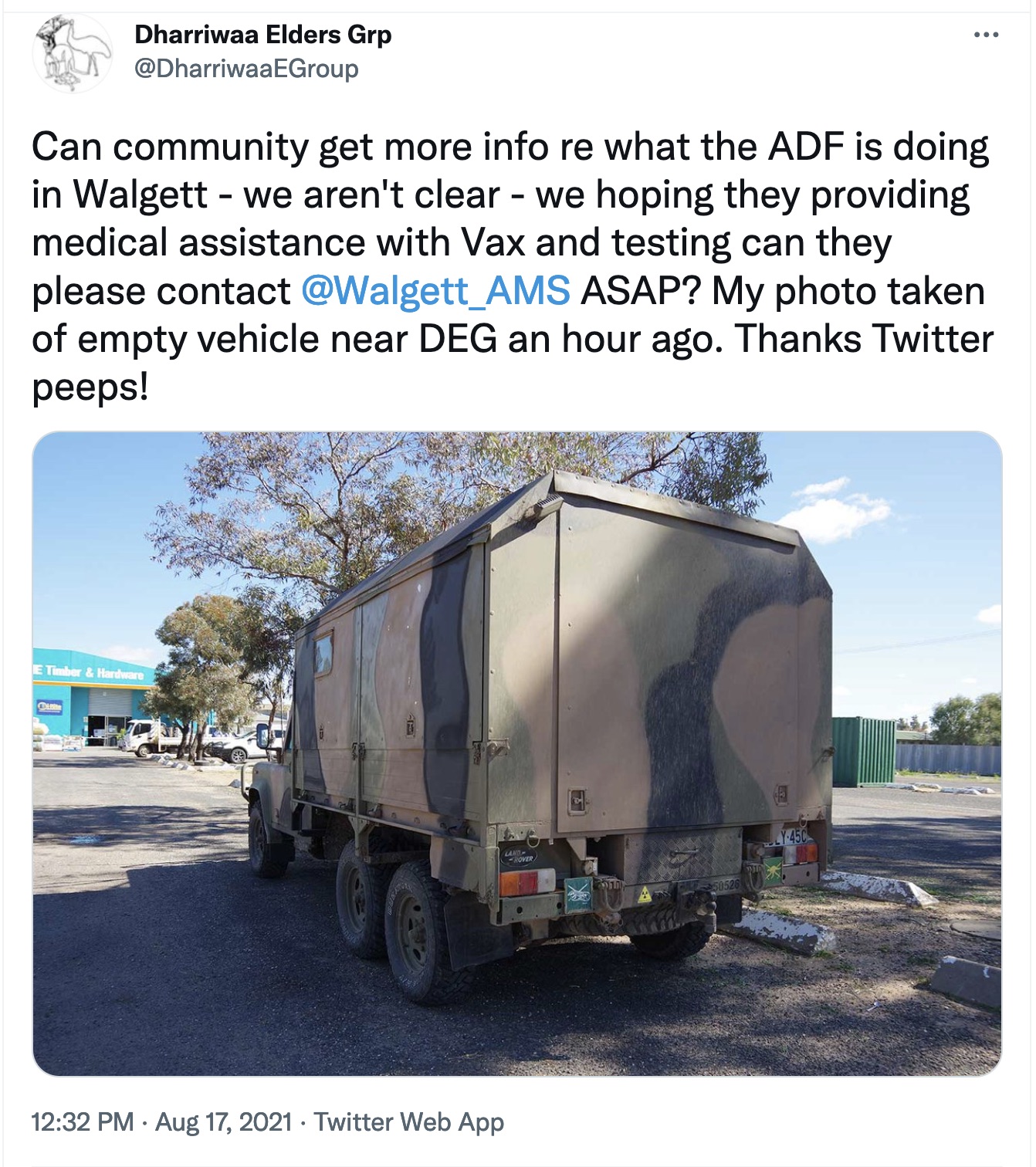 The Federal Government promised late last year that Aboriginal and Torres Strait Islander people were near the top of the priority list in Australia’s vaccination rollout, and has been quick to point to vaccine hesitancy for the worrying low levels in New South Wales.

Aboriginal health leaders told Croakey hesitancy is an important issue, but they say the low rates are also due to major problems with supply, Pfizer allocations, communications, language around lockdowns and vaccination risks, and access.

Major barriers include lack of access to the internet and smart phones which were needed to book vaccination appointments through an online system that was difficult for many to navigate.

Many people in remote regions also may not drive or have cars, live long distances from testing and vaccination options, have high caring responsibilities and chronic illnesses, and struggle to get access to credible information from media and social media, particularly around changing information on Astra Zeneca, they say.

But she and other health leaders said those relationships with culturally safe services are being put at risk by long-running shortages in the Aboriginal and Torres Strait health workforce and devastating funding cuts in federal budgets over the years.

As well, services are facing burnout after being hit over the past two years by devastating bushfires, floods and the escalating COVID emergency, and are now having to factor in potential closures if staff are close contacts, particularly given the wait for testing results is currently four to five days in some regions.

“Our current workforce has burnt out,” Skeen said. “They are working long hours and they are part of the community as well. They’ve got children in the schools, they’re the Elders in the community, they’re on the ground every day so when the crisis is over they are who is left to maintain the message of keeping mob safe.” 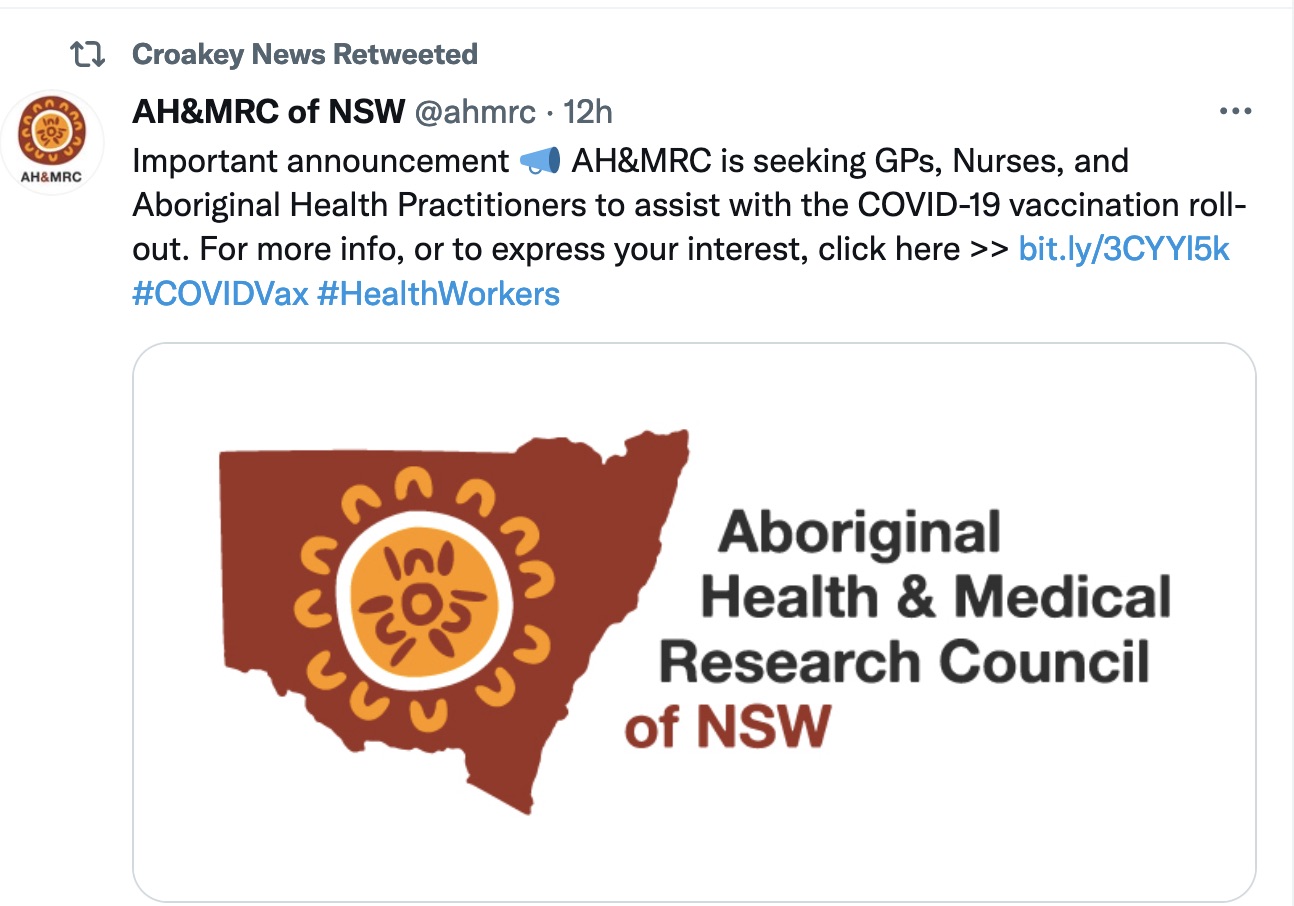 IAHA is urging a short-term workforce surge now, looking to tap into health professionals in regional areas, like podiatrists and physiotherapists, who are not working in the lockdown but could assist with testing and vaccinations.

It also wants greater investment in the Aboriginal and Torres Strait Islander health workforce and cultural safety training over the long term.

“This cannot be just reactive, we have to plan for this for years to come because we have no idea how COVID will play out,” Murray said.

The crisis also underlines the urgent need for cultural safety training for doctors, nurses and other health professionals when they are in training, said Professor Juanita Sherwood, Vice Chancellor First Nations Engagement at Charles Sturt University in Bathurst.

“Our best places for cultural safety are our community controlled health organisations and we should be preferencing and supporting them to deliver the culturally safe care that our mob need,” Sherwood told Croakey.

But she warned that many Aboriginal people in western New South Wales, as elsewhere, don’t have access to Aboriginal Medical Services and, even if they do, have to rely on non-Indigenous secondary and tertiary care, which are often racist.

“And they are not being strongly encouraged to be culturally safe,” she said.

The good news is that failures of the past have led to some important changes during this pandemic, including the leadership of the national Aboriginal and Torres Strait Islander Advisory Group on COVID-19, which has had direct input to the Prime Minister’s office.

In New South Wales, Skeen has spearheaded the creation of a New South Wales Western COVID Taskforce over the past week or so, “because there were too many voices, and there were heaps of agencies contacting (AMS) members and it was adding to the vicarious trauma of having to tell a story over and over”.

The New South Wales COVID response is also being informed by lessons from the 2009 swine flu pandemic, which disproportionately hit Aboriginal and Torres Strait Islander people who were effectively left out of pandemic planning.

Those lessons are about “making sure that we’ve got Aboriginal people right at the beginning, making decisions from planning to implementation and evaluation and monitoring, getting our people involved from the ‘get go’,” says Newcastle-based Euahlayi researcher Kristy Crooks.

That requires “really strong, clear governance structures where we are active and equal participants, and are able to have a real meaningful say in how decisions be made about public health and Aboriginal and Torres Strait Islander people”, she said.

Crooks, who is doing her PhD on privileging Aboriginal and Torres Strait Islander voices in infectious disease emergencies, and her colleague Kylie Taylor have been leading this work with a team of dedicated Aboriginal staff and key Aboriginal stakeholders  at Hunter New England LHD.

The team has taken on board their research findings from the 2009 pandemic and the need for culturally safe responses from the top decision making levels and through to community engagement on the ground.

Although the vaccine rollout has been slow nationally, Crooks says powerful work has been done by the Hunter New England Public Health Aboriginal team “through our processes, ways of working and strong partnerships (that) is reflective of good cultural governance embedded at all levels in the pandemic response and strong leadership of Aboriginal people at the local level”.

“We know the communities we work with, we know what strategies are going to work better, and it’s that local knowledge and community connections that are really key when communicating with community about the vaccine, and community getting the best access to the vaccine,” she said.

Strong partnerships with local AMSs means that, now that they have many more vaccines, “we’re actually ringing people to make that (booking) easy, really prioritising connecting people with the vaccine rather than waiting for them to make an appointment themselves,” Taylor said. “Reaching out to people to have a yarn”.

It’s embedding “cultural governance” in health services, creating responses for Aboriginal and Torres Strait Islander people in a way where “our closeness and connectedness is not seen as a risk factor but a protective factor”, and addressing cultural safety in a racist health system, she said.

“We’re not more at risk in COVID because we’re Aboriginal or Torres Strait Islander or Pacific Islander, we’re more at risk because our people have always been poorly serviced by the health system,” she said. “Being colonised is the risk factor.” 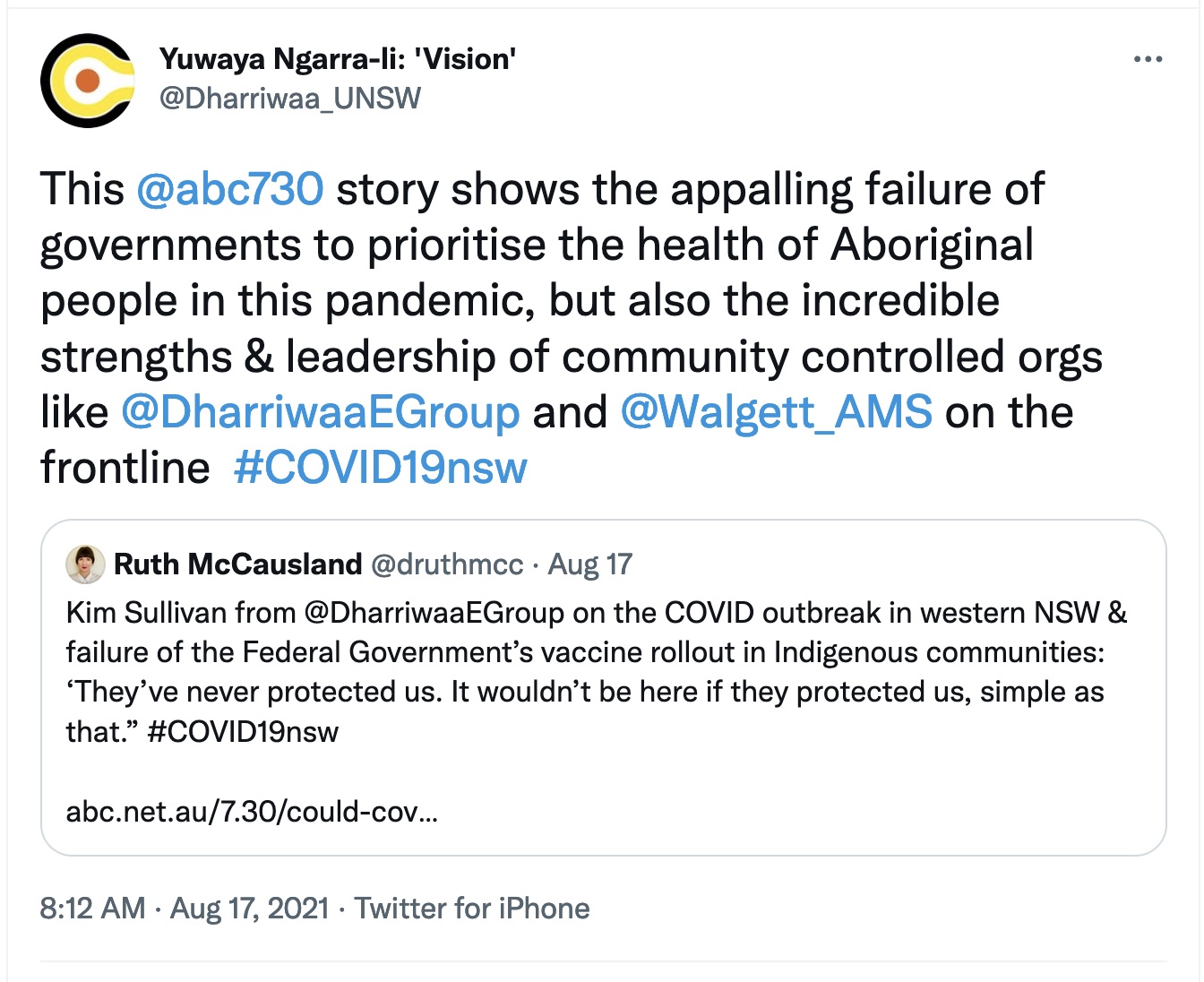 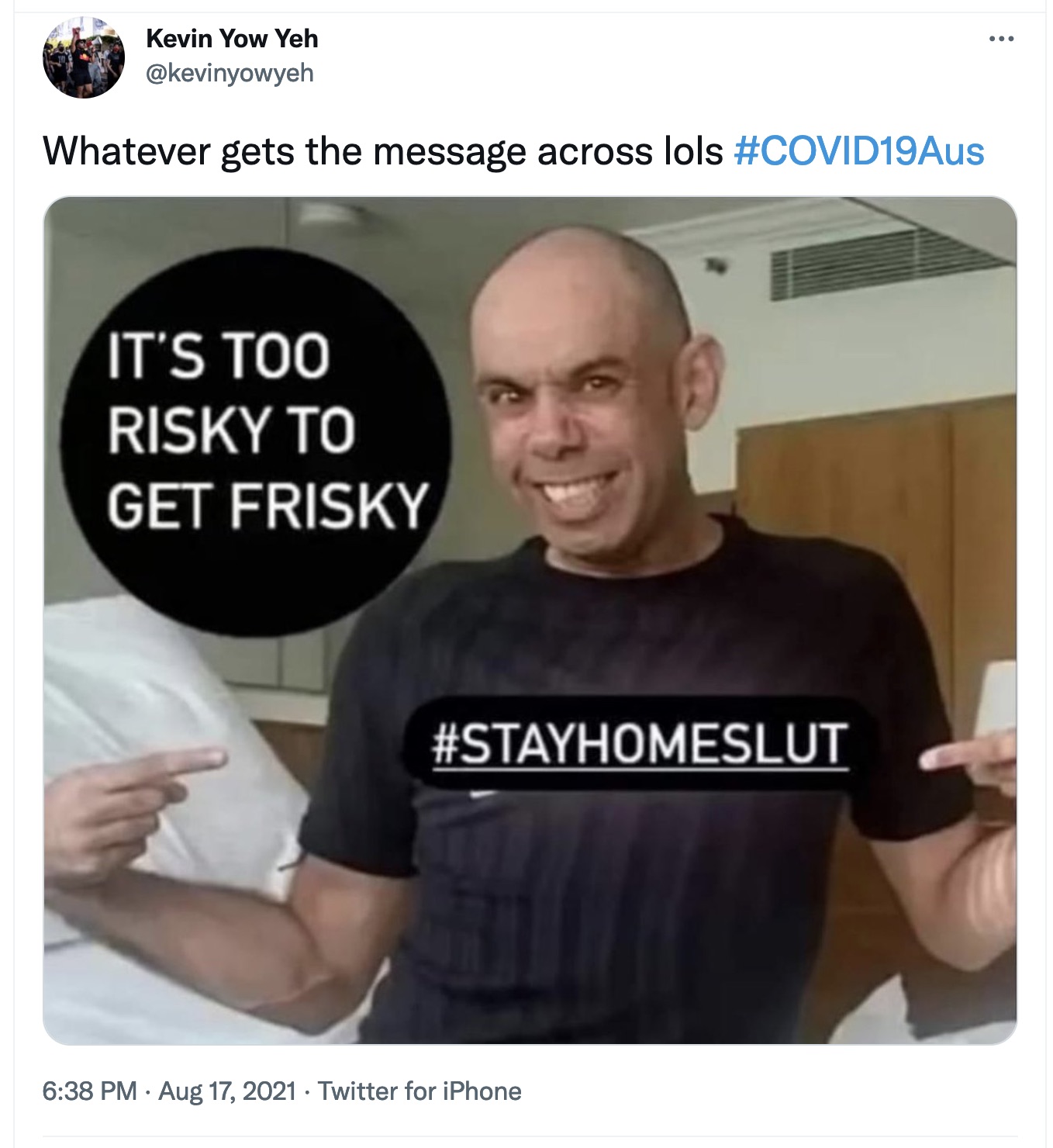 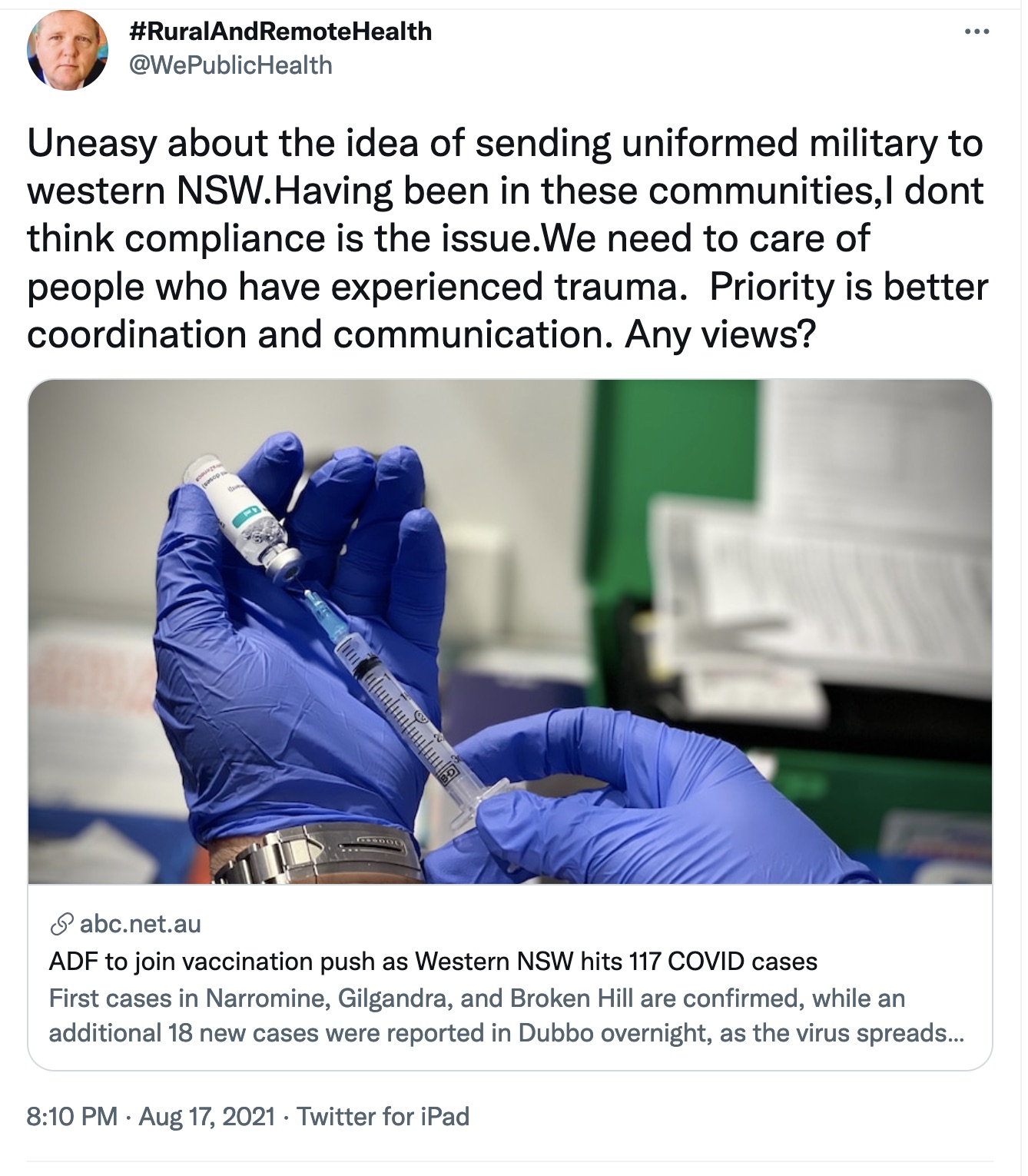 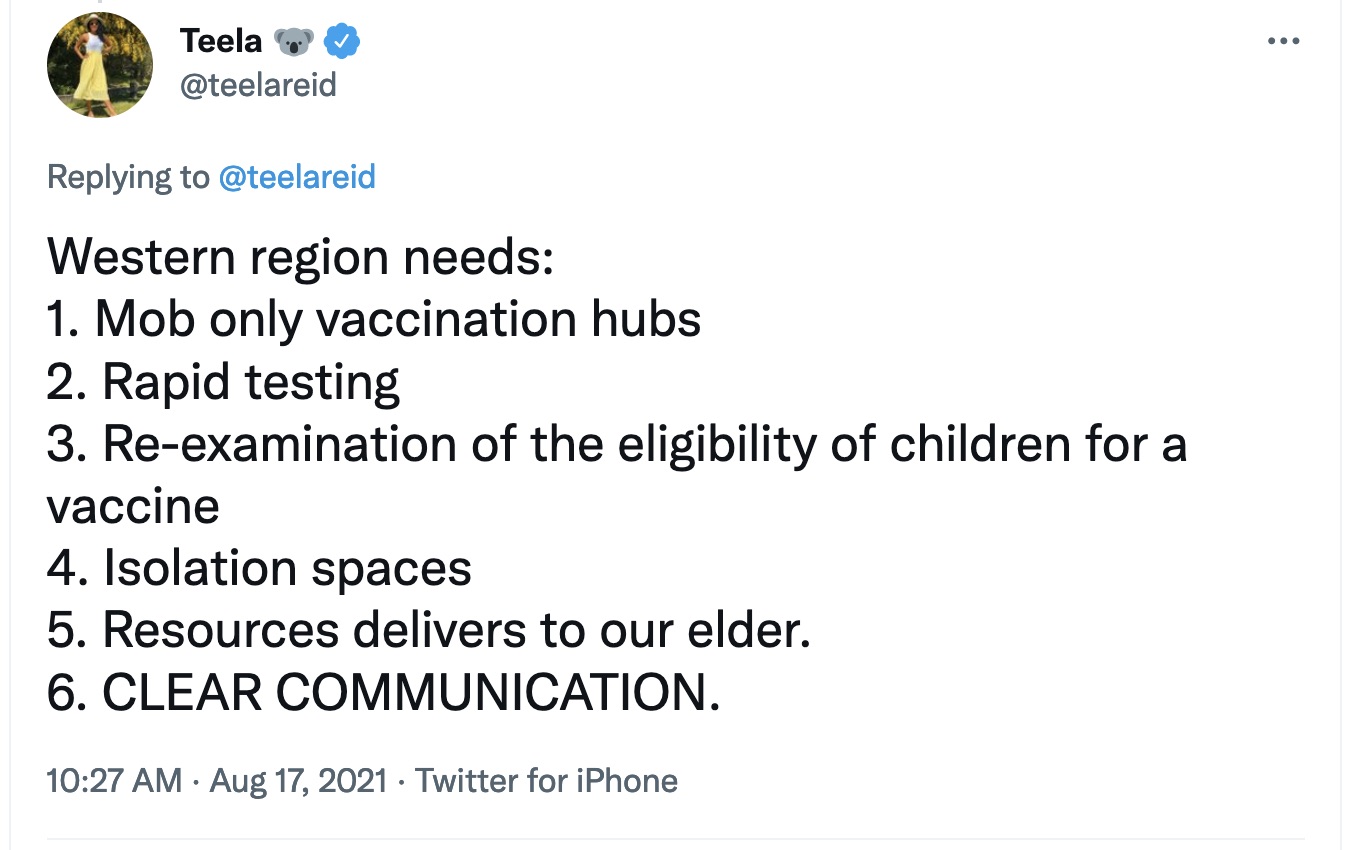 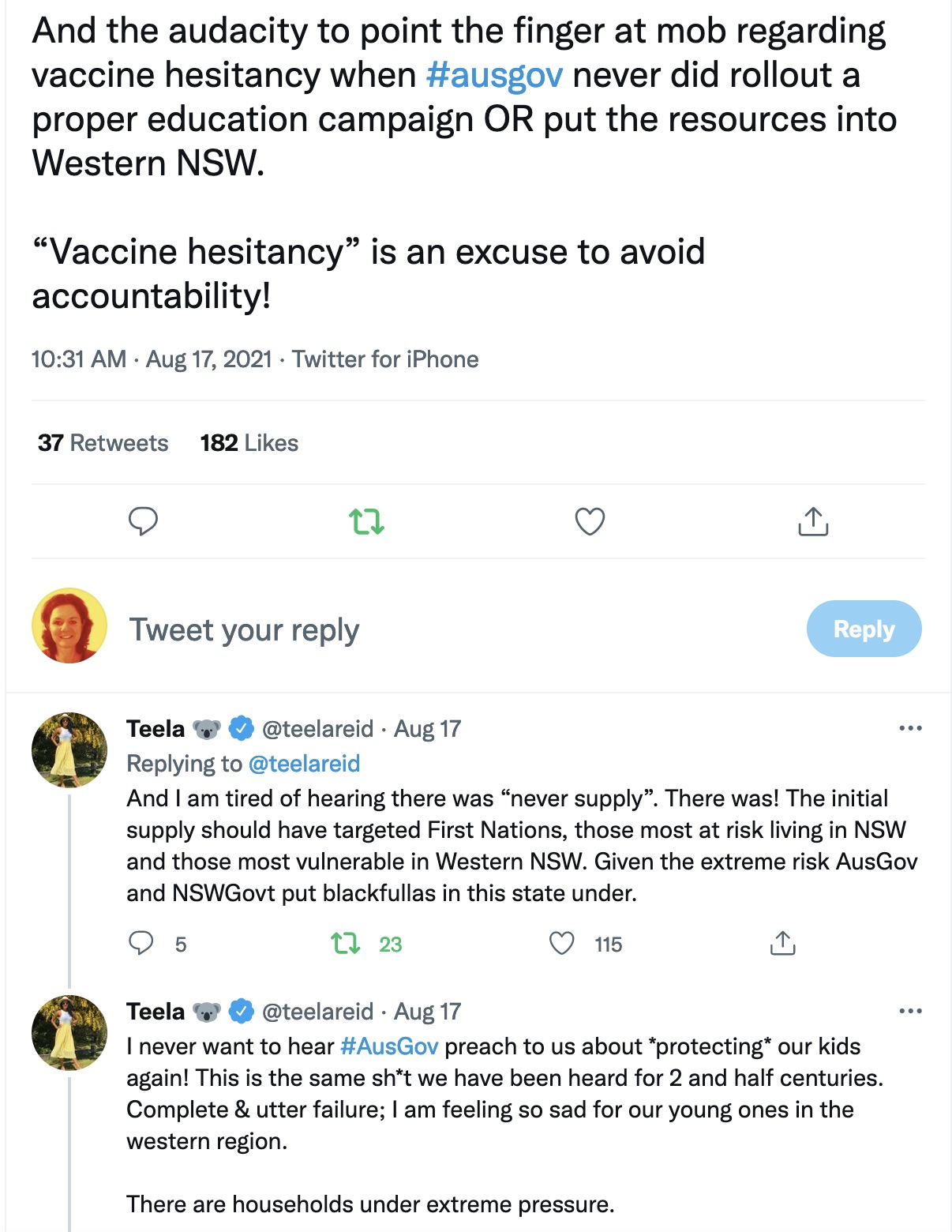 PrevPreviousWhat does the Taliban takeover of Afghanistan mean for the health of women and girls?
NextWhere is the National Obesity Strategy?Next