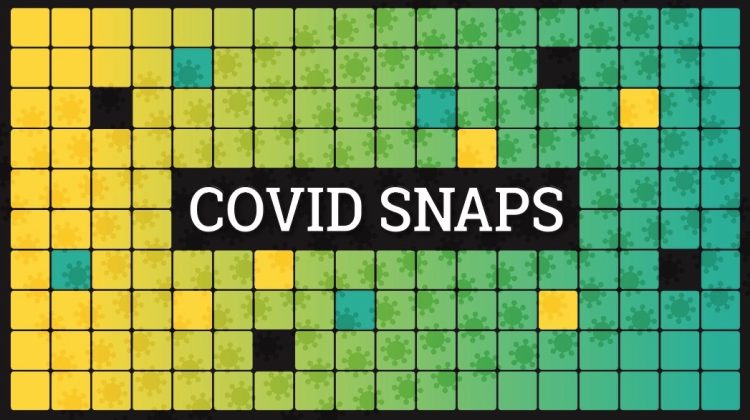 A column by Professor Kathy Eagar

COVID SNAPS: mind your language, word of the year, and some sobering lessons from Sweden

A strong body of international evidence shows that poorer public health performance in controlling COVID is associated with worse economic performance, writes Professor Kathy Eagar, Director of the Australian Health Services Research Institute at the University of Wollongong, in her latest column.

“Contrary to much political commentary, there is not a trade-off between controlling COVID and economic growth,” she says.

The quote of the week is from journalist Matilda Boseley: “Personally my favourite ‘Australian way of life’ is not dying in a natural disaster, but hey, maybe that’s just me”.

The word of the week and the year is: “Vax”. It has been chosen as the word of the year for 2021 by lexicographers at the Oxford English Dictionary (OED).

“When you add to that its versatility in forming other words – vaxxie, vax-a-thon, vaxinista – it became clear that vax was the standout in the crowd.”

I must admit that ‘vaxinista’ is a personal favourite.

Acronym of the week is DIY RAT, and challenge of the week is to mention DIY RAT in conversation at least once this week. Double points if you combine it with ‘cost effective’.

Australian COVID at a glance

Here is a summary of the COVID state of the nation yesterday. 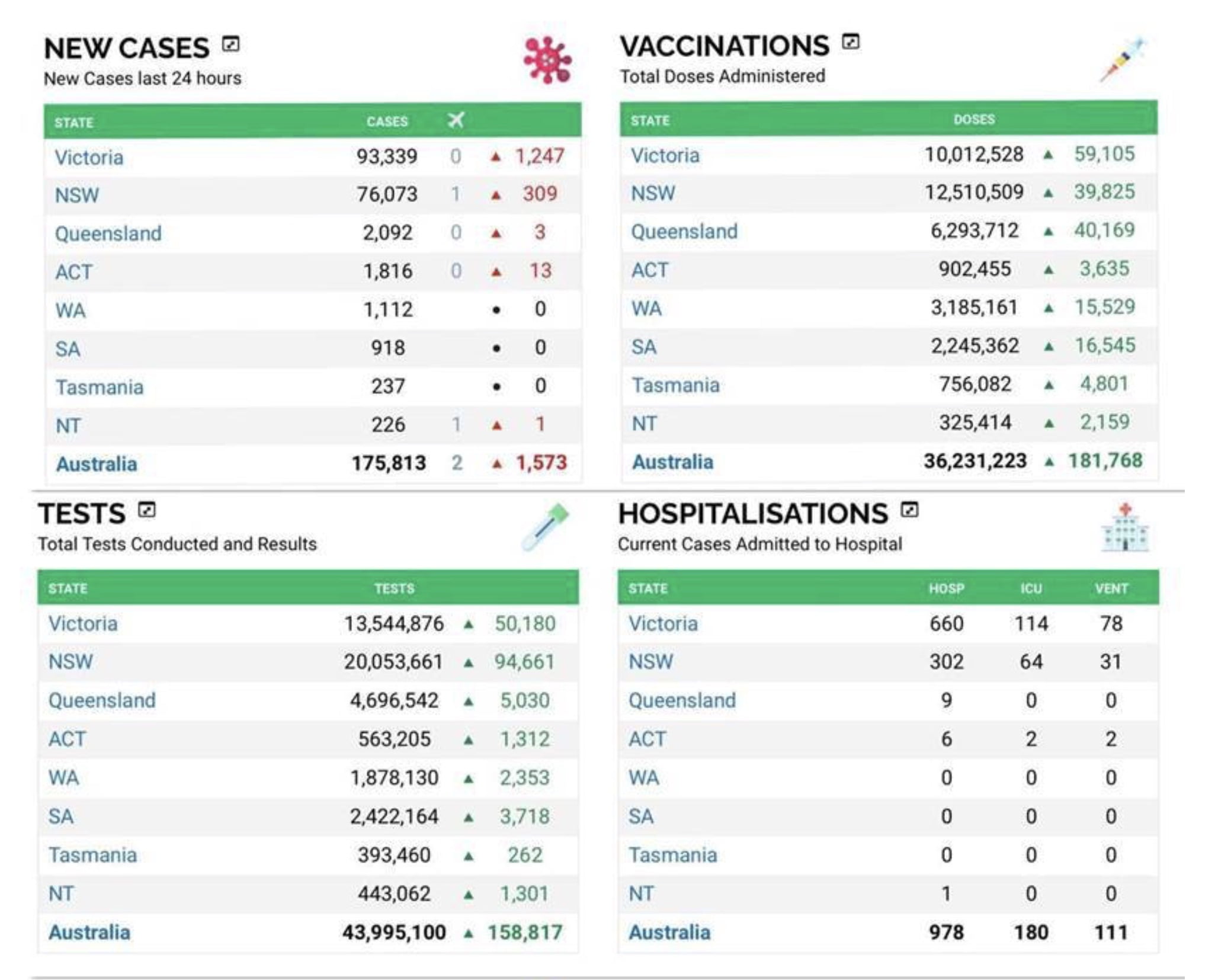 See cases by LGA for both Victoria and NSW. Melbourne still has a full bingo card but it is great to see improvements elsewhere.

NSW: 249 cases and 3 deaths today. 5-day moving average is 204 (277 last week), Reff 0.93 (0.83 last week) – cases have been quite stable until the last few days when they have started to increase. While a few days isn’t a trend, it’s likely that we are starting to see a slow but gradual increase of cases due to the end of lockdown.

Brilliant ACT. What else is there to say? 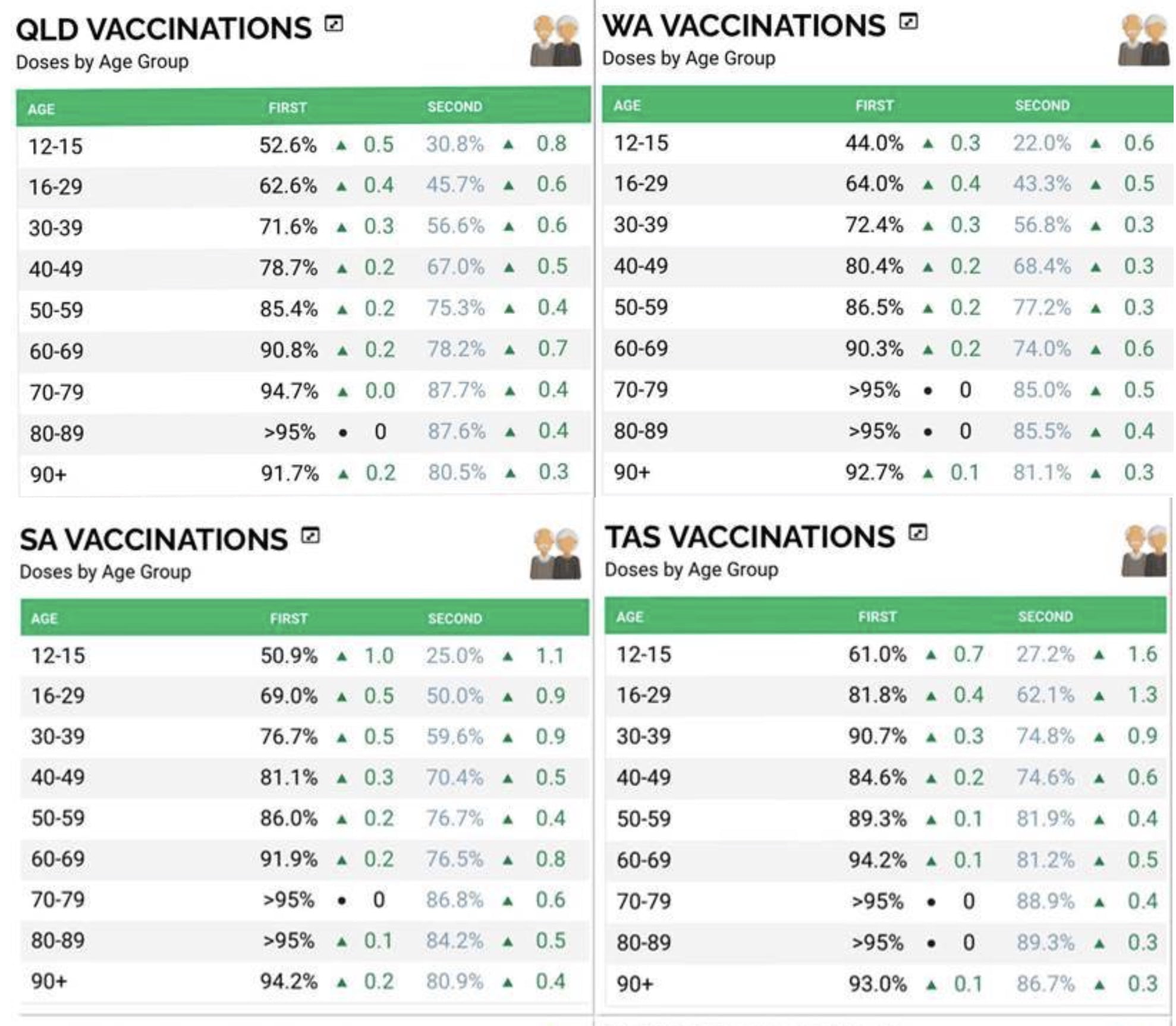 Below is a graph comparing countries based on their vaccination take-up rate. The X-axis across the bottom shows the percentage of the population vaccinated in each country and the Y-axis (running up the side) shows the rate at which vaccines have been administered over time.

The USA is the orange line. After a good start, the USA daily vaccination rate started to decline after only 35 percent of the population was vaccinated. New Zealand has been doing better than us with the daily vaccination rate much higher. The stand out is Portugal. Their rate of decline is much slower than Australia and they have a much higher percentage of the population vaccinated.

Australia is the black line. Our rate of vaccinations each day increased until we hit about 70 percent of the population being vaccinated. Since then our daily vaccination rate has slowly declined.

If our trend continues, we will bottom out with about 90 percent of the population vaccinated. Thanks Behrooz for this graph. 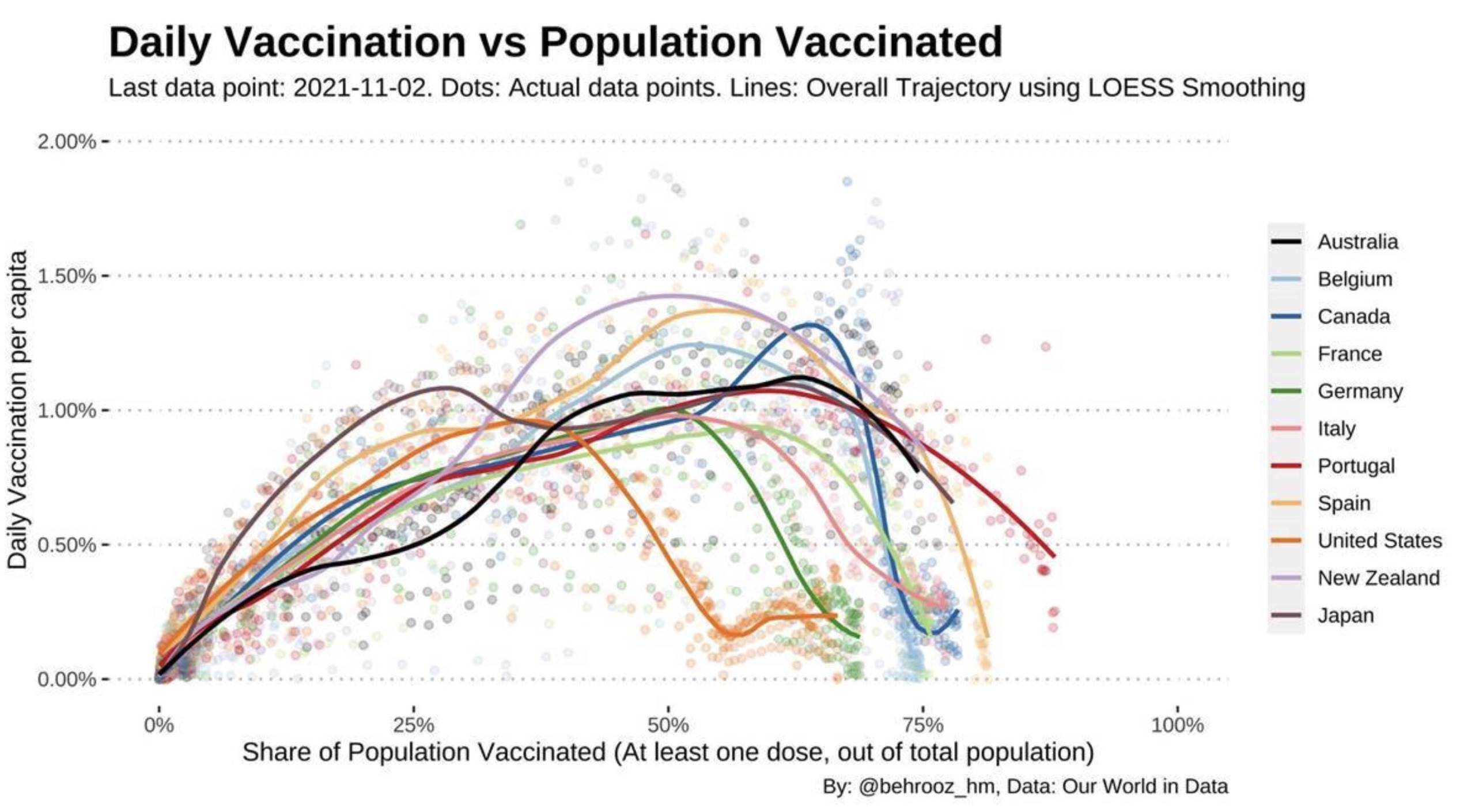 Here is the latest update on vaccination rates for NSW statistical areas. Regions are listed in order.

Baulkham Hills and Hawkesbury has the highest rate. Richmond Tweed has improved and no longer has the wooden spoon. It now belongs to Sydney City and Inner South. Just a reminder that these are the percentage of people over 16, not the whole population.

If you look at the increases over the last few weeks, you will see that the rate of increase is slowing down. This is consistent with the pattern in the international graph I included above. 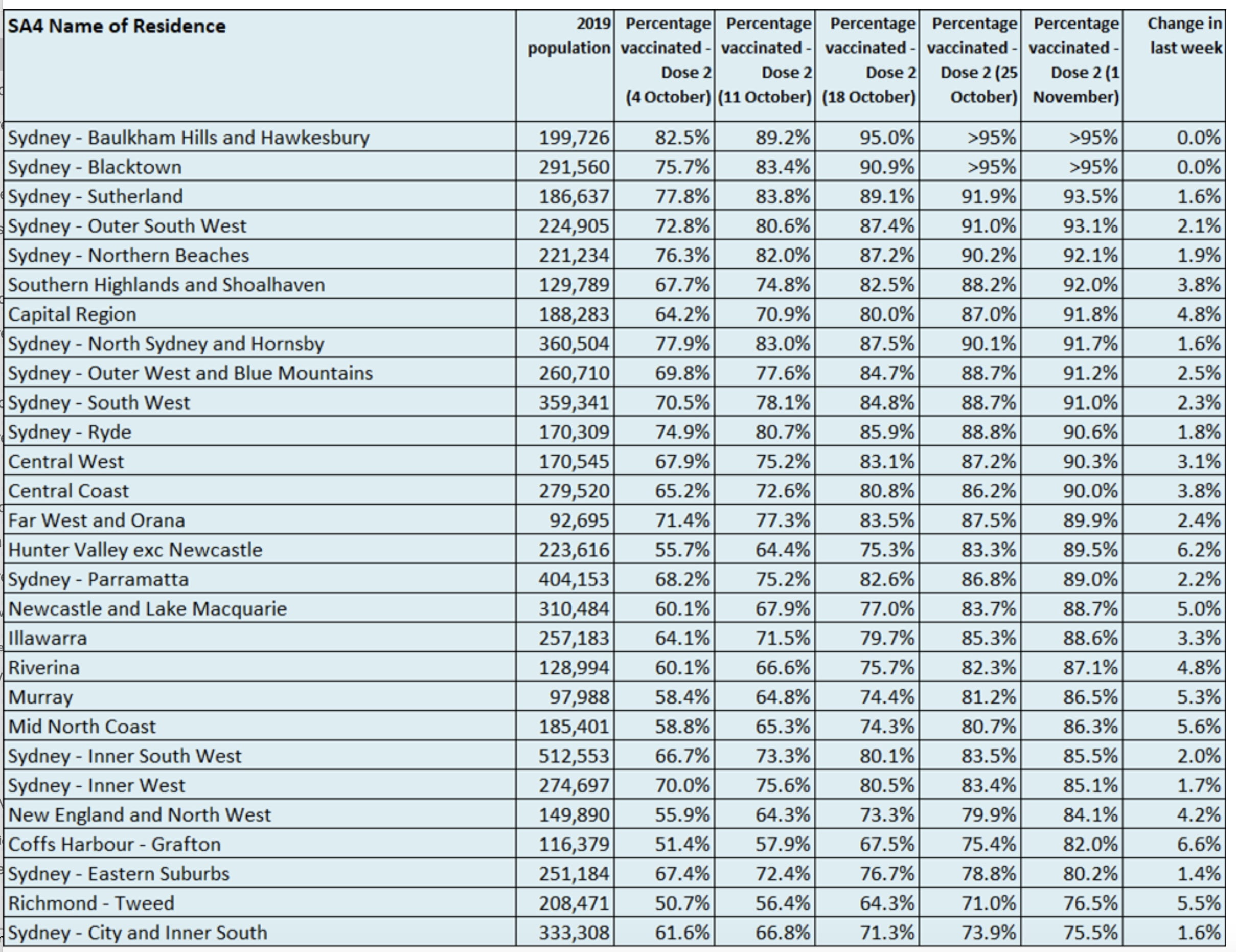 In total, 26 areas are at 80 percent or better, up from 23 last week. Only two are still to reach the 80 percent threshold.

Illawarra has had a 3.3 percent improvement in the last week but the Hunter has leapfrogged over us. Nothing like an outbreak of COVID in the Hunter to improve vaccination rates.

American children aged 5 to 11 can begin to be vaccinated against COVID within the next day or two after the Advisory Committee on Immunization Practices (ACIP) advised the Centers for Disease Control and Prevention (CDC) that Pfizer’s paediatric vaccine should be used in this age group. The vote was 14 in favour, 0 against. 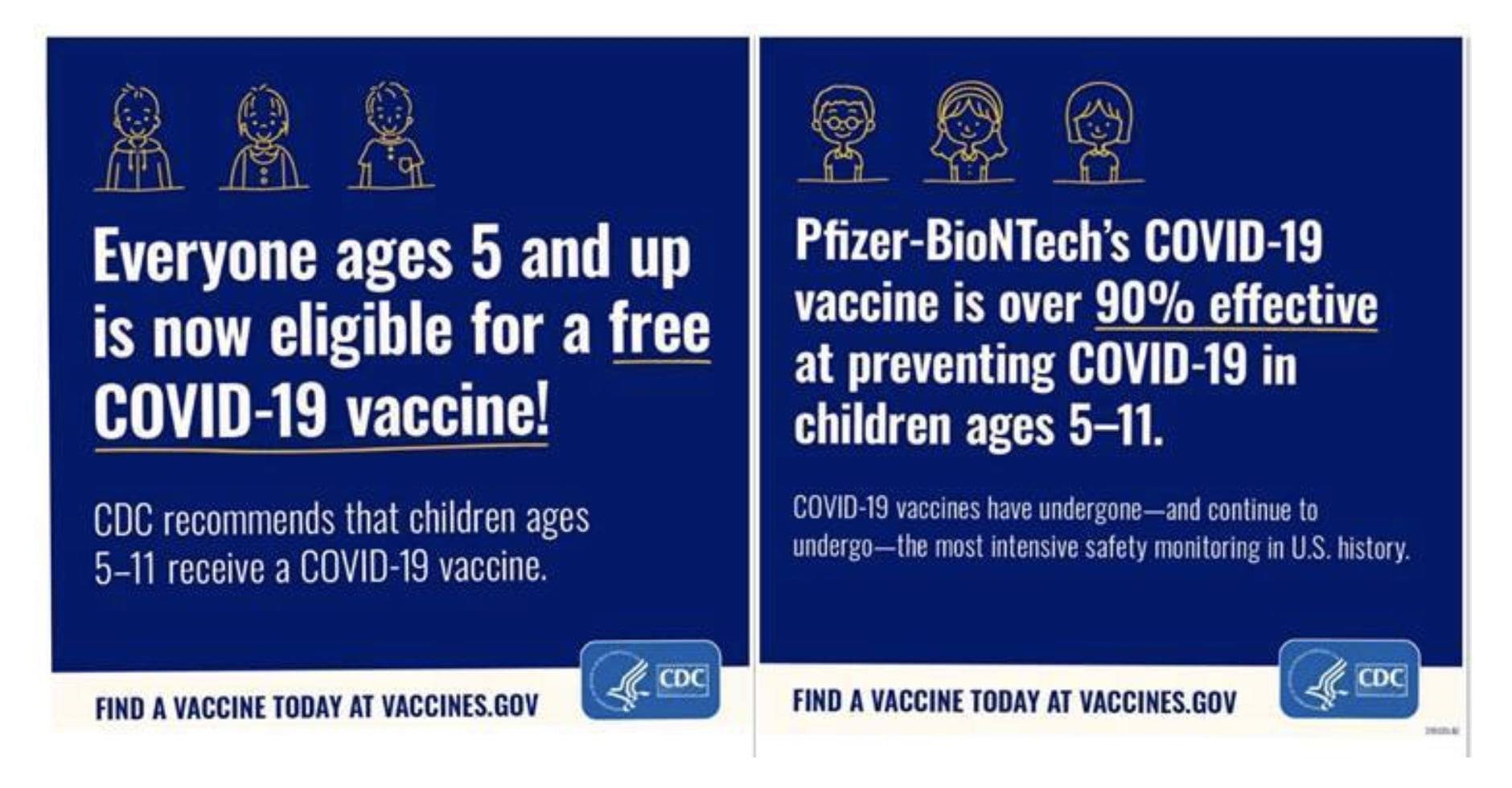 As I flagged in my update last week, we will need to wait while our approval processes drag on. I think it is still safe to assume that it will be possible for all 5-12 year olds to be offered the vaccine in time for school Term 1 in 2022.

The sooner the better from my perspective and you can see the reason why in this graph, which shows the age profile of cases by week for NSW.

Young children represent a higher percentage of cases every week and people under 20 accounted for 49 percent of all cases in the last week. Be careful in interpreting this as cases are also falling every week. This graph is percentages not case numbers.

Mind your language: two doses is not “fully vaccinated”

We’ve all be busy for months tracking the daily figures on how many people are “fully vaccinated”.

We know this because of the experience in Israel. Israel was one of the first countries to vaccinate a high percentage of the population. Israel initially reported significant reductions in cases and deaths. But, after six months or so, cases and deaths started to increase rapidly again. Cutting a long story short, the reason for the fourth surge of cases in Israel is that vaccine effectiveness wans over time.

A very important study out of Israel has just been published in The Lancet. It is on my recommended reading list at the end of this update.

This study adds to a growing body of data about vaccine effectiveness. Over 728,000 people were given three doses of vaccine and they were compared in a controlled study to 728,000 matched controls who had only two jabs. Compared to the two jab control group, the three jab group had a 93 percent reduction in COVID hospitalisations and an 81 percent reduction of deaths.

These massive reductions are not comparisons to being unvaccinated. They are the differences between getting two doses and getting three doses.

This study is so powerful that it confirms some key conclusions. Vaccine-induced immunity wanes by about six months for all vaccines. This is due to a combination of both time and the Delta variant. Third shots are highly effective for restoring immunity. We should stop thinking about the third jab as an optional ‘booster’. Protection against COVID requires a third shot to achieve high, durable efficacy.

Being six months behind Israel, Australia has the opportunity to watch whether immunity after the third jab also declines at the same rate.  We can’t rule out that we might need a fourth and a fifth to be fully vaccinated over time.

Finally, third dose programs should not be seen to be in competition with the idea of achieving global vaccination equity. We need to achieve both.

Australia has now approved a third dose for everyone. You will be eligible for it six months after your second dose.

You might remember that Sweden caused quite a stir in 2020 when it took a very different approach to COVID management. The Swedes proudly argued that Swedes are very sensible and that the community could just get on and live life normally.

They resisted public health measures introduced by other comparable countries. The Swedish Public Health Agency argued that they would be able to achieve ‘herd immunity’ through safe exposure to the virus with minimal loss of life. In doing so, they became a natural control group to evaluate the impact of public health measures in other countries.

The Swedish Government established a Corona Commission to evaluate Sweden’s national response to COVID and it has recently reported. It makes for sobering reading.

In essence, the key finding is that Sweden designed and implemented a strategy for the upper-middle class. Sweden’s key recommendations – working from home, avoiding public transport and avoiding crowded spaces – gave no real consideration for low-income residents and service workers. Sweden ignored other key measures (especially masks) that would have protected people who could not work from home.

They concluded that “Sweden’s handling of the pandemic has been marked by a slowness of response. The initial disease prevention and control measures were insufficient to stop or even substantially limit the spread of the virus in the country.”

They found no justification for not implementing public health measures earlier, and described Sweden’s pandemic preparedness as inadequate.

Similar to the experience of healthcare workers in Australia, they reported that adaptation (of healthcare) has been achieved at the price of extreme pressure on staff and of cancelled and postponed care. “We will therefore live with the consequences of the pandemic for a long time to come.”

Sweden’s Corona Commission concluded that COVID has had a disproportionate impact on residents with lower educational and income levels, and those born outside of Sweden. Sound familiar?

Contrary to much political commentary, there is not a trade-off between controlling COVID and economic growth. If you don’t manage COVID, you can’t manage the economy. Whoever would have thought it?

The good news conclusion for Australia is that, while it was tough for the people of Victoria and NSW, we can look at the Swedish experience to confirm that Australian lockdowns and other associated public health measures have been worth it.

Effectiveness of a third dose of the BNT162b2 mRNA COVID-19 vaccine for preventing severe outcomes in Israel: an observational study. The Lancet

A very confronting question: are health workers not valuable enough to share vaccines to protect them? Watch this and weep as Annette Kennedy, President of the International Congress of Nurses, speaks about the deaths of 115,000 health workers in the pandemic so far and the urgent need to close the vaccine equity gap. (Also on Twitter from the World Health Organization).

Croakey thanks and acknowledges Professor Kathy Eagar for this column, which is based upon a regular COVID update that she emails her networks, combining a mixture of evidence, observation and pithy humour. On Twitter, follow @k_eagar

PrevPreviousSafety concerns loom large for patients and GPs as COVID-19 care transitions back to community
NextCatch up with the highs and lows from COP26: from the fossil fools to warrior criesNext