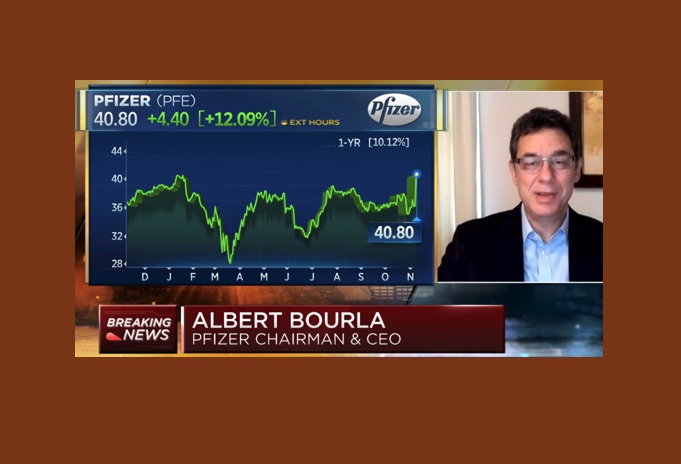 Pfizer CEO tells CNBC viewers: 'It is a great day for humanity'

Introduction by Croakey: When Pfizer and BioNTech issued this media release on 9 November, it generated international headlines about an impending COVID-19 vaccine and moved stock markets around the world.

While these interim results may appear encouraging, concerns have also been raised – both about the way the information was released by press release rather than through scientific channels, and the many questions left unanswered by the announcement.

Dr Richard Horton, editor-in-chief of The Lancet, tweeted that:

…publishing interim results through a press release is neither good scientific practice nor does it help to build public trust in vaccines.

An announcement should come with full publication of a peer-reviewed research paper in a scientific journal.”

Horton also called for messaging from scientists and government to be coordinated to manage public expectations, warning that contradictory messaging damages public trust.

Surprising and somewhat disappointing they didn’t post these results even as a preprint. Not a fan of publication by press release first – no matter who had seen the results privately.”

Many articles have identified a range of questions left unanswered by the press release (and thus also by those media reports that simply regurgitated the release).

Stat News provides a detailed overview of the vaccine’s development, and notes that key information about it is not yet available.

An article published by the United States-based Association of Health Care Journalists also flagged concerns about the release of “data by press release”, and cautioned that “it’s important to keep asking questions, wait for all the data, avoid hype, and help readers and audiences understand what this news does and does not mean”.

Epidemiologist Gideon Meyerowitz-Katz also identifies many issues yet to be resolved, and says that “despite the fantastic good news of the press release, we are left with almost as many questions as answers”.

Meanwhile, The Guardian and Reuters have outlined some of the logistical challenges involved given this vaccine’s requirement for cold storage.

(Update on 12 November). Also at The Guardian: Pfizer chief sold $5.6m of shares on day Covid vaccine was announced.

Important questions are also raised in the article below, by Dr Harry Al-Wassiti, Professor Colin Pouton and Dr Kylie Quinn, which was first published by The Conversation.

90% efficacy for Pfizer’s COVID-19 mRNA vaccine is striking. But we need to wait for the full data

German biotech company BioNTech and US pharmaceutical Pfizer announced on Monday promising early results from their phase 3 clinical trial for a vaccine against SARS-CoV-2, the virus that causes COVID-19.

These early results are what is known as an “interim analysis”. It’s an early look at the data before a study is complete, to understand if there is any indication of whether the vaccine might work.

Currently, this trial has enrolled 43,538 volunteers, giving half the volunteers two doses of the vaccine and the other half two doses of a placebo. These volunteers then continued their normal lives, but they were monitored for any symptoms that could be COVID-19, with testing to confirm.

Analysis of 94 volunteers with confirmed COVID-19 suggests the vaccine has an efficacy of over 90%.

This means that if you took ten people who were going to get sick from COVID-19 and vaccinated them, only one out of ten would now get sick.

Read more: Australia’s just signed up for a shot at 9 COVID-19 vaccines. Here’s what to expect

Can we get excited yet?

There is more data to come. This is a press release and the data have not undergone “peer-review” through scientific publication, although it has been assessed by an independent monitoring board. The study also won’t be complete until 164 volunteers have confirmed COVID-19, and the estimate of efficacy may therefore change. Finally, the volunteers must be monitored for a defined period of time after vaccination for any side effects and this must be completed.

Important questions also remain. It’s unclear how long protection will last, as this study has only been underway for three months. It’s unclear if this vaccine protects against severe disease or if this vaccine will work equally well in everyone. For example, a phase 1 clinical trial with this vaccine showed that immune responses were lower in older people.

But 90% efficacy is striking. To give some context, the US Food and Drug Administration indicated they would licence a SARS-CoV-2 vaccine with 50% efficacy. The flu vaccine often provides around 60% efficacy and the mumps vaccine, which is currently the fastest vaccine ever made at four years, provides around 88% efficacy.

The BioNTech/Pfizer vaccine could outstrip that, after just nine months of development. This level of efficacy means virus transmission could be very effectively controlled.

That has the research community excited. It bodes well for other vaccines currently being tested for SARS-CoV-2 and we could end up with multiple successful vaccines. This would be great because some might work better in certain populations, like older people.

Multiple vaccines could also be manufactured using a broad range of established infrastructure, which would accelerate vaccine distribution.

Producing mRNA on a commercial scale

The BioNTech/Pfizer vaccine is what’s called an mRNA vaccine.

As this article by Associate Professor Archa Fox, an expert on molecular cell biology from the University of Western Australia, explains:

mRNA vaccines are coated molecules of mRNA, similar to DNA, that carry the instructions for making a viral protein.

After injection into muscle, the mRNA is taken up by cells. Ribosomes, the cell’s protein factories, read the mRNA instructions and make the viral protein. These new proteins are exported from cells and the rest of the immunisation process is identical to other vaccines: our immune system mounts a response by recognising the proteins as foreign and developing antibodies against them.

A problem for Australia is that it can’t make mRNA vaccines onshore yet.

The Australian government has an agreement for ten million doses of the BioNTech/Pfizer vaccine. Since this vaccine requires two doses, this agreement is sufficient for five million Australians. It’s unclear how long it will take until any vaccine is widely available, but we may hear more about this in the coming weeks and months.

The vaccine requires storage at a temperature below -60℃. This will certainly be a challenge for shipping to Australia and local distribution, although not impossible. One solution to this problem is to form vaccination centres to roll out the vaccine once it becomes available. In a briefing by Pfizer, the company said it will use ultra-low temperature shipment strategies and the vaccine can then be distributed on “dry-ice”.

Currently, Australia has no capacity to produce mRNA on a commercial scale given the technology’s novelty.

But we (the authors) and others have been working to coordinate and build the manufacturing capacity in Australia for future mRNA vaccine and therapeutics. With financial support aimed at private-public mRNA manufacturing collaboration, Australia can equip itself with this vital technological asset.

Read more: Australia may miss out on several COVID vaccines if it can’t make mRNA ones locally