Creating healthier goals for Yolngu girls: some reflections from a health promotion program

Last September, a group of Yolngu teenage girls from East Arnhem Land came to Sydney for a week of sporting and cultural events, as part of a program encouraging them to develop healthier aspirations.

As part of the program, Kevin Bird, Healthy Lifestyle Co-ordinator at Miwatj Health Aboriginal Corporation, sought to use team sport as a catalyst to help the girls make good decisions.

The article below, an edited version of his paper to the recent National Rural Health Conference, describes what he learnt from the program about the importance of wider environmental and social influences when seeking to influence young peoples’ health.

Team sport as a catalyst for better health for Yolngu girls

Most young Yolngu are athletic and would love to play sport in a high level team. However, existing team sports are male oriented and there are limited options for girls.

So we needed a team sport to provide the right hook to attract girls to participate in the healthy lifestyle program.

It’s not easy for young girls in remote Aboriginal communities to have aspirations and realise them. Without goals or ambition, there’s not much motivation to develop healthy lifestyle practices such as self-care and self-discipline.

Many of the girls would love to play sport at an elite level and many of them have the talent. Some of the girls aspire to work as local rangers, looking after their land.

However, the girls’ aspirations are limited as most of them haven’t had much exposure to anything outside their own or a neighbouring community, except perhaps a visit to Darwin. Many young people in communities are sniffing petrol and other substances.

We wanted to excite the girls with real possibilities. We needed to develop a structure and pathway for the girls to learn and practise personal skills. This process had to be slow and incremental, factoring in the inevitable distractions of cultural and family obligations, and peer pressure to sniff petrol.

In March 2012, a group of at-risk girls aged between 12 and 16 from three remote Aboriginal communities in East Arnhem started in the program. Initially the activities were social and recreational, such as beading, listening to music and watching DVDs.

But the girls wanted to play sport, so netball coaching started and then we entered two teams in the mainstream Gove competition. This gave the girls a focus; a reason to attend training and be healthy – and it gave them something to aim for.

We talked to the girls about a trip to Sydney and the entry criteria for selection. The girls had to attain a minimum of 80% school attendance in the six months leading up to the trip. (The overall school attendance rate had dropped to below 50%.)

Six months later, 15 of the girls had met the criteria with consistent attendance at the drop-in centre, healthy lifestyle clinic, fundraising activities, netball games and training sessions. They earned their place and travelled to Sydney for six days in September 2012.

The trip was packed with activities that broadened the girls’ horizons. They had a tour of Sydney sporting facilities on the fields and in the dressing rooms of NRL, ARL and cricket teams.

They spent a morning at Bangarra Dance Theatre learning about all the different roles required to stage a dance show. They were pampered at a hairdressing school, and hosted and entertained by an inner-city high school.

They had netball and AFL workshops and played in a round robin netball competition against a Sydney team that included some local Indigenous players. Everywhere they went they shared their own experiences, stories and dance.

It was a busy and engaging trip with visible signs that the girls had gained confidence and were starting to take pride and look after themselves. They asked us to treat and dress their sores, which was a real milestone. Part of the personal hygiene preparation before the trip had been to learn that skin sores are not normal and can be treated.

What did we learn?

While the focus was on lifting the lid of what’s possible for the girls and building their aspirations, we overlooked the impact of their return to the same difficult environment.

The girls returned to a community still struggling from the impact of alcohol and volatile substance abuse. Many of them still shared their three-bedroom house with up to 15 others, making it difficult to find food and clean clothes and get to school.

We had raised the sights of the girls, but hadn’t addressed the ongoing issues that made it all very hard. We needed to raise the sights of the families at the same time, and to harness their support to continue the development process that makes it possible for the girls to achieve their goals.

It is possible that there were too many activities during the trip and not enough time to consolidate and talk about what the girls were seeing and experiencing.

It would have made much more impact to help the girls explore, while still in Sydney, what their experiences could mean on return to their communities.

On return to their communities, a number of the girls reverted to poor school attendance and disruptive behaviour. We met with the girls individually and as a group, visited their homes and families and increased daily contact with the few that were struggling.

There were positive signs, with the girls indicating that they’d like to try again for the 2013 trip and with recruitment of other girls as well. Over the 2012/13 long school holiday break, the girls did not revert to some risky unhealthy behaviours that they’d practised previously.

There are many complexities in embedding healthy lifestyle practices in remote Aboriginal communities. Simply providing sporting activities without addressing the many barriers to healthy participation will not be effective or sustained. Creating supportive environments and developing personal skills are necessary for improved health and wellbeing.

To turn the tide, these young people need to know that dreams and aspirations can be realised.

Young Yolngu girls need to see more of their own being successful and achieving their goals so they too can believe in themselves and strive for something special.

• Healthy lifestyle initiatives are funded by the Chronic Disease Branch of the Department of Health and Ageing. 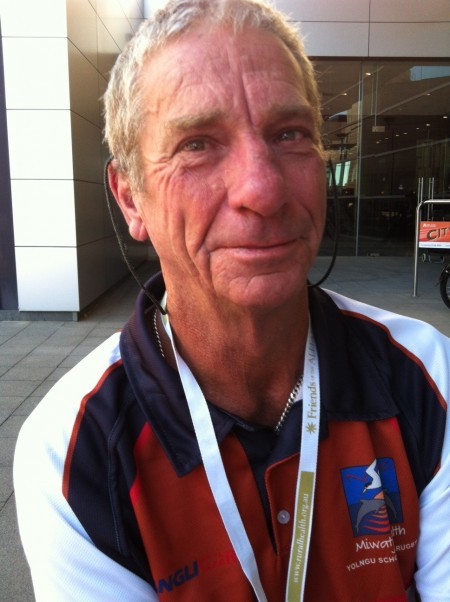 Kevin Bird at the conference.

• Recognising an unsung hero – and some vox pops

• NDIS is shifting the paradigm, and the balance of power