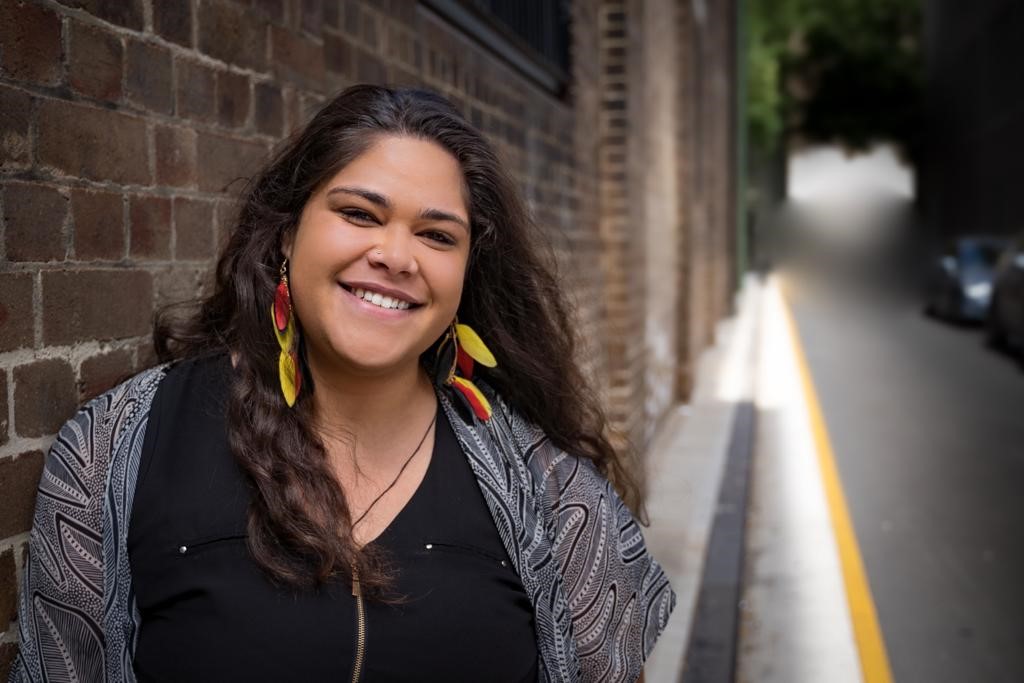 Introduction by Croakey: Dharawal and Dharug woman Shannay Holmes writes below about the importance of providing young people with culturally safe tools and language to navigate support and discussions around the topic of suicide.

“It’s time our young mob are supported and equipped with the appropriate tools to be able to support themselves and their peers,” Holmes writes. “I imagine if myself and my friends were taught how to talk about suicide and how to better support each other at school, we may not have had to struggle for as long as we did.”

Holmes works on the Heal Our Way campaign, which aims to provide practical resources to community members to equip them with the skills to have safe conversations around suicide.

Led by Cox Inall Ridgeway in partnership with Aboriginal communities in NSW, health leaders and people who have lived experience of suicide, Heal Our Way is a NSW Aboriginal and Torres Strait Islander Suicide Prevention Campaign funded by the NSW Ministry of Health under Towards Zero Suicides (TZS) initiatives.

This article contains discussions around the topic of suicide.

My name is Shannay Holmes and I am a Dharawal, Dharug and Fijian woman. My mob originally comes from La Perouse and have strong ties to the Hawkesbury River region.

I work as a Senior Consultant with Cox Inall Ridgeway leading most of our Social and Emotional Wellbeing projects for government, corporates, and Aboriginal community-controlled organisations. Through these projects I work a lot with community trying to elevate their voices and create change in mainstream services and culture.

There is still a lot of fear and stigma around suicide and part of this is because people don’t know what to say to someone who identifies as having thoughts of suicide. I find a lot of that fear comes from fear of saying the wrong thing and not having the awareness or education to have these conversations.

The hard truth is that Aboriginal and Torres Strait Islander people between the ages of 15 and 35 are three times more likely to die of suicide than non-Indigenous peoples. When I was 15 (11 years ago), I made an attempt on my life due to the grief and loss of my older brother.

From my own experience as well as working with young people, I can see a high need for young people to have the skills and tools to be able talk about suicide and to support their friends and family, should someone be having thoughts of suicide.

It’s time our young mob are supported and equipped with the appropriate tools to be able to support themselves and their peers.

We cannot work off the premise of suicide being a taboo topic anymore, or that this is an area that doesn’t affect our young people, it’s time to hold space for these conversations and listen to what young people are saying they need.

There is a misconception that suicide and mental health don’t affect young people and we shouldn’t expose them to such ‘heavy’ conversations, but this couldn’t be further from the truth.

I imagine if myself and my friends were taught how to talk about suicide and how to better support each other at school, we may not have had to struggle for as long as we did.

Recognising that cultural identity, belonging and connectedness are central to mob’s wellbeing is key to supporting our young people from thoughts of suicide.

Heal our Way focuses on encouraging people to reach out to each other and have a conversation, but most importantly focuses on how to have safe conversations around suicide.

It’s easy for me to empathise with young people who want to learn how to talk to their friends about their mental health, about how best to support them and what to do if someone discloses to them they are having thoughts of suicide. Those were my peers, that was me.

Most Aboriginal and Torres Strait Islander people have been touched by suicide to some degree and it is so important that we use our place in the community, as adults and Elders, to ensure that our young people have the tools to protect themselves and support their friends.

It’s no secret that having these kind of conversations can be daunting and uncomfortable, but it’s important to understand that you don’t need to have a degree or be a mental health professional to ask the question if someone is having thoughts of suicide.

From my experience what stops people from asking is the fear of saying the wrong thing, making a situation worse or just seeing someone you care about in pain and not knowing what to do. I encourage you to just ask the question, hold a safe space for your friend’s response and help support them to get the help they need.

Sometimes the language we use stops young people from approaching us. For instance, you would never want to say, “you’re not thinking about doing anything stupid, are you?” but instead try saying, “are you having thoughts of suicide?”

It’s really that kind of language and stigma that we want to take out of conversations. If people seeking help are faced with judgment it can deter them from getting the support they need.

Heal Our Way is focusing on changing up the language we use to better support people and providing the tools for people to be able to listen and create a safe space for people to share their worries.

Young people constantly run into the risk of not being taken seriously or given the opportunity to share their voice. I personally have felt that working in this space of suicide prevention as a young woman.

Young people are not always given the time because there is the belief that these topics of conversations should be left to the adults.

That is not to say there aren’t community members who take our young people seriously and offer them a seat at the table to be a part of discussions that ultimately affect them.

Throughout this campaign I have had the pleasure of working with people such as Professor Pat Dudgeon, Director of the Centre of Best Practice in Aboriginal and Torres Strait Islander Suicide Prevention and Aboriginal psychologist Vanessa Edwige, Chair of the Australian Indigenous Psychologists Association, who have voiced vehemently that our young people need to have a voice and be a focus of this campaign.

But more importantly, we need to be teaching our young people about suicide prevention and mental health from an early age, not when they are at a point of crisis.

Talking about suicide with people you care about is the ultimate act of support.

Remember to connect, reach out and heal our way.

The Heal Our Way campaign has been developed by Aboriginal social change agency Cox Inall Ridgeway, in partnership with the Aboriginal health sector, health leaders and people who have lived experience of suicide. The aim of the campaign is to provide practical resources and tools to community members, to encourage safe conversations about suicide. The campaign has been funded by the NSW Government. 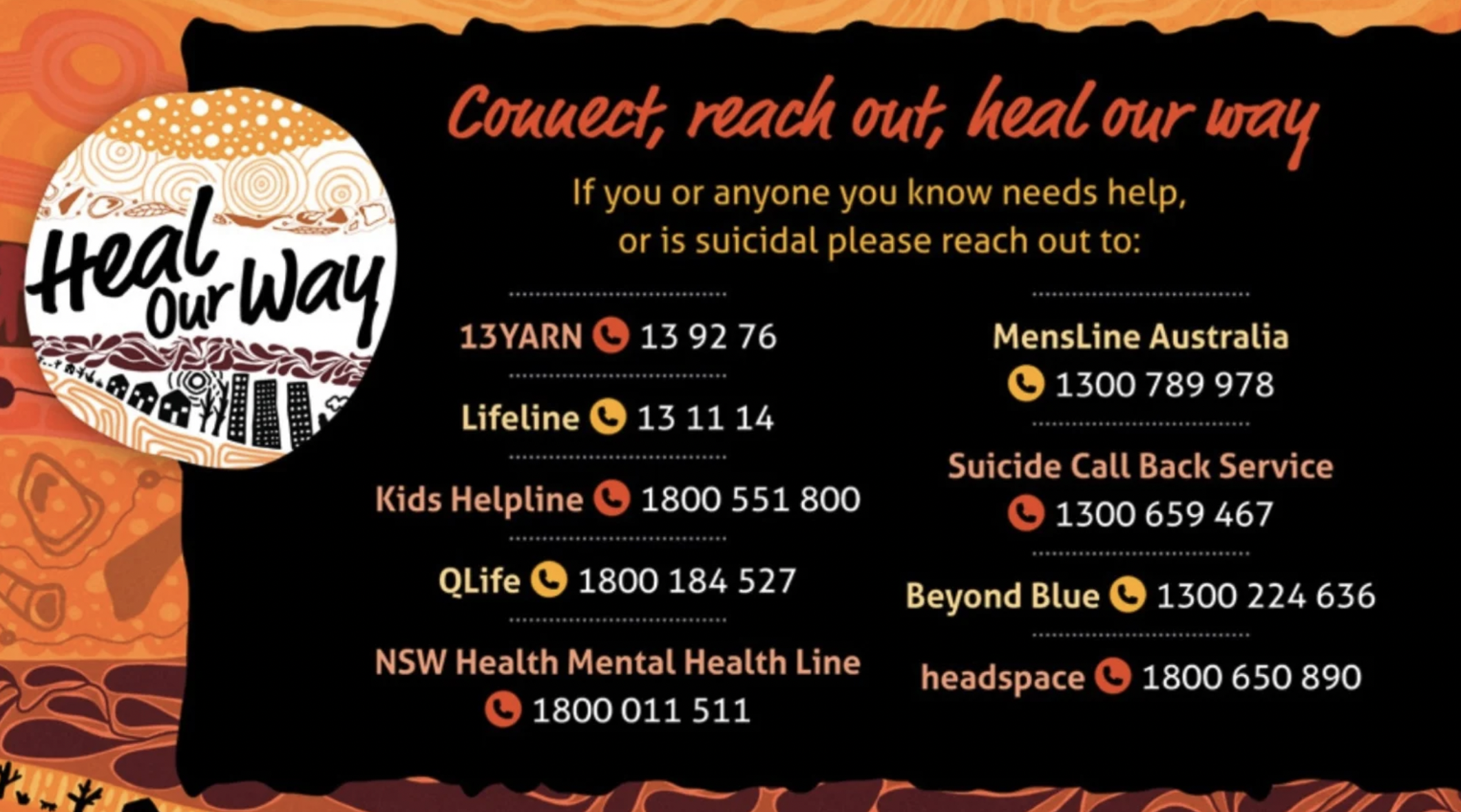