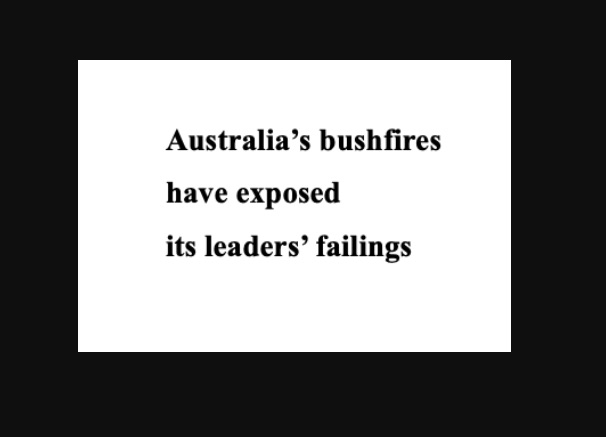 Headline on an editorial in The Financial Times, 23 December, 2019

Crisis communication and leadership – teachable moments from the Australian bushfires

This article was first published on January 10, 2020

Introduction by Croakey: The lack of leadership provided by Prime Minister Scott Morrison and his Government during the bushfires disaster has drawn international attention and generated widespread discussions about the nature and importance of leadership.

In the article below, behavioural scientist Professor Julie Leask, from the Sydney Nursing School and also the School of Public Health at the University of Sydney, provides some timely reflections for health professionals about the importance of leadership in risk communication.

The “soft skill” of communication can be difficult to put into effective practice, says Leask, illustrating the importance, especially for the health sector, of valuing and resourcing public and interpersonal communication skills and related training.

Good leadership is vital in a crisis. Leaders provide a focal point for attention and calls to action; communicate life-saving information; convey a sense of control and care amidst apparent chaos; boost morale; and calm people.

This article makes some observations about the qualities of good leadership that have emerged as being vital to managing a crisis.

Whether it be Australia’s bushfire crisis right now, the 2009 H1N1 influenza pandemic or the outbreaks of Severe Acute Respiratory Syndrome (SARS) in 2003, leaders can make a huge difference to how people respond to hazards.

Leadership turns out to be a central part of good risk communication. Risk communication was defined by the National Research Council in 1989 as “an interactive process of exchange of information and opinion among individuals, groups, and institutions”.

The field emerged from the 1979 Three Mile Island nuclear accident in New York State and later industry-mediated events where the responses of outraged and fearful publics led to large scale effects on people and industry, beyond those impacts on human health.

Risk communication has since been studied and taught in relation to disaster management, environmental health concerns, cancer clusters, infectious disease outbreaks and so on.

Risk communication applies to any instance where a hazard is known or uncertain, high or low and it becomes necessary to communicate with people about that hazard – help them act to avert illness, injury or death and/or to reassure them. It rests on seven useful cardinal rules you can read more about here.

I first encountered this body of knowledge when studying vaccine safety scares – when people may become fearful of a vaccine that almost always has little actual hazard, such as when people feared the MMR vaccine could cause autism, despite the science discrediting this idea.

We noticed the importance of leadership in these instances when studying the media coverage of anthrax vaccination refusal by Australian Defence Force personnel in 2003. The coverage turned around when the respected Chief of the Defence Force, General Peter Cosgrove, stated he would be vaccinated.

I’m mindful of risk communication while writing this article as I prepare to leave for Fiji for a WHO deployment to assist in communication related to the measles outbreak in the South Pacific.

During such events, the communication tasks will differ according to the level of hazard and ‘outrage’ – the emotions surrounding the perceived risk. In an event where hazards are known and agreed, like our bushfires, leaders must foster trust – the key resource for community cooperation needed to survive and stay safe.

Whether it be evacuating before a fire emergency; quarantining oneself with a new and highly pathogenic infection; or vaccinating during an outbreak, a community or individual is more likely to do what trusted leader asks of them and this can sometimes mean the difference between life and death.

Trust and its attributes

It is better for leaders to focus on the qualities of trustworthiness than telling people to trust them.

The six attributes of trust, according to Renn and Levine, are:

Weeks into our bushfire crisis, some leaders have expressed these attributes.

In my home state of NSW, Rural Fire Service commissioner Shane Fitzsimmons has consistently demonstrated technical competence and objectivity. He has been there from the start on our TV screens and social streams as the personification of the effort to protect communities and is increasingly being lauded for these qualities. The Premier of NSW, Glady’s Berejiklian has also been consistent and quietly demonstrated good faith and empathy in this particular crisis.

These leaders have come from somewhat predictable places but sometimes they emerge.

One of the most outstanding examples of emergent leadership during a crisis was seen during SARS in Canada in 2003. Dr Sheela Basrur was at the time the director of public health for the greater Toronto region. As the emergent Severe Acute Respiratory Syndrome spread mostly within health care facilities it sickened many and killed 44 people. By all accounts, SARS was terrifying.

Dr Basrur’s obituary reports her as the face of calm, giving daily briefings and urging doctors to act on their knowledge instead of their fear. She was much loved and highly respected and served in public health until her untimely death from cancer in 2008.

Communication – the soft skill that can be hard

The main way to convey the attributes of trust is through good communication.

Communication skills are often described the ‘soft’ ones in professional spheres, associated with the nurturing side, possibly as optional and of less value than the ‘hard’ ones like technical skills and knowledge. But even technical competence must be communicated somehow. And communication is a skill with which all of us will struggle.

Prime Minister Scott Morrison’s own struggles with communication have been much scrutinised over the past days during Australia’s bushfire crisis. Some of his interactions and words have shown that communication, when done poorly, hampers responses to a crisis.

Even if his desire to communicate goes beyond political gain and comes from a place of respect and care for others, he demonstrates that these skills may need to be learnt and practised.

Below are some reflections on communication based on the Prime Minister’s recent efforts:

During a press conference on the 3rd of January, the PM stated “I understand” six times. This was clearly an effort to verbally communicate empathy but it fell flat.

It is simply not true that a person can understand the feelings of thousands of Australians in these situations. A person’s home has been under threat for weeks. They have worried about their family members. They have stared at treasured possessions – wedding gifts, childhood teddy bears, an heir loom vase – wondering if they would be there by the end of summer. Another has lost their home. Each minute they are thinking about what has gone and how they will re-build their lives.

It is impossible to truly understand what this is like to experience these things. An alternative would be to state what the PM has seen, how it made him feel, and what his government is doing about it – to find authentic ways to demonstrate empathy.

2. Action is the loudest form of communication

How we act speaks much more loudly than what we say. So if there is inconsistency between these, people will first look at actions.

Despite attempts to communicate concern and compassion during press conferences; photo opportunities; and an advertisement about defence deployment, the PM will almost certainly not gain the respect he wants as leader during this crisis.

The pivotal moment came just before Christmas when he went on an unannounced holiday to an undisclosed location, later revealed to be Hawaii. Many Australians interpreted this as showing a lack of concern and regard for the crisis and a lack of transparency.

Even within an attempt to demonstrate concern through action, the PMs communication has backfired via simple interactions that provide teachable moments.

On the 3rd of January, the Prime Minister visited the fire-devastate town of Cobargo in southern NSW. Television footage shows two instances where he approached people to shake their hands. They did not extend theirs.

Instead of taking this as non-consent to physical interaction, he reached down for their hands and took them anyway. He then awkwardly proceeded to shake the quiescent hand of an upset young Cobargo woman and later, the unyielding hand of a pensive firefighter.

The footage from these instances was widely shared and decried. His effort to show compassion during a visit to one of the worst affected towns backfired. Moreover it demonstrated a lack of respect for consent to physical interaction.

4. Brave the discontent, even if it’s uncomfortable

The visit to Cobargo was never going to be easy, but the interaction with the young woman continued to go downhill. During the handshake, she stated, “’I’m only shaking your hand if you give more funding to our RFS (Rural Fire Service). So many people have lost their homes.” He walked away. “We need more help”, she called after him.

The PM took something – her hand, but gave nothing back – not even a listening ear.

This is communicative abandonment. It often occurs when the interaction is too hard and a professional believes it’s better to remove themselves immediately or capitulate to the demands of the person and get them out as fast as possible. It can be necessary if there is a risk to personal safety but no such risk appeared to present at this point.

In the PM’s situation, a better approach with the young woman would be to stay there and briefly hear her out – to ask about her circumstances, learn what was important to her, and then briefly describe the assistance of the federal government. In doing so, the PM would undoubtedly be thinking about how he can rapidly close the conversation and move on.

However, it’s better to be calm and centred when we are ourselves anxious about time and interactions getting out of hand than to act on our own anxiety. A simple two minutes with that woman may have de-escalated a difficult situation and reduced the sting in the inevitable criticism.

In 2013, the day after my father died, I saw the then health minister at a conference in which we were both speaking. We had previously met during a private briefing. After her address, she left the podium, walked straight up to me in the front row and gave me a hug, saying how sorry she was. It gave me great comfort.

It’s the soft skill that can actually be very hard. It doesn’t always come naturally, even to the motivated.

So public and interpersonal communication skills should be highly valued, resourced and people appropriately trained and equipped.

• This article was first published at the Human Factors blog and is cross-posted with permission. 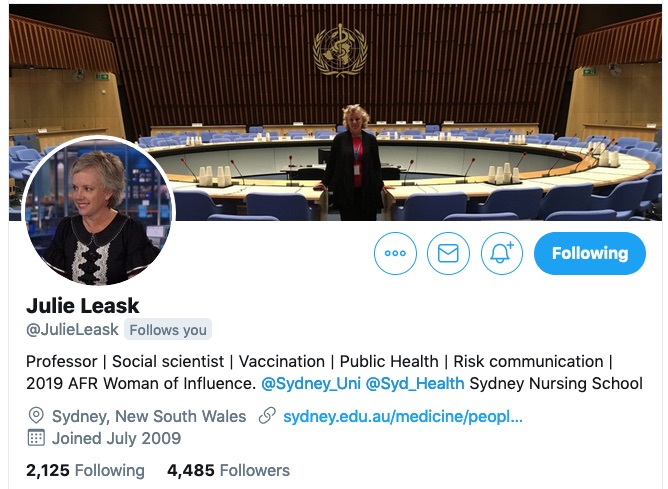