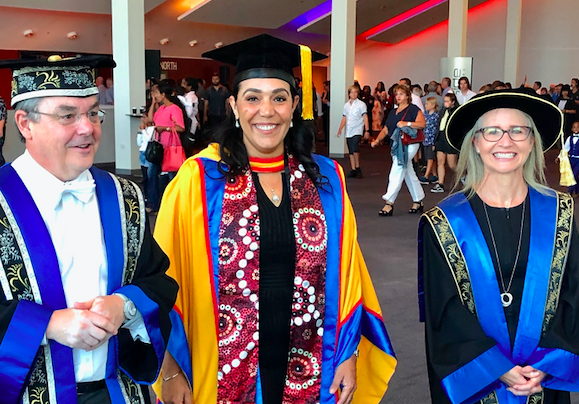 Directors and members of Croakey Health Media have congratulated the organisation’s Chair, Dr Janine Mohamed, for receiving an honorary doctorate from Edith Cowan University, recognising her longstanding contributions to the health and wellbeing of Aboriginal and Torres Strait Islander people.

The award was presented to Dr Mohamed, CEO of the Lowitja Institute, at Edith Cowan University in Perth on 2 February, 2020.

Janine Mohamed is a proud Narrunga Kaurna woman from Point Pearce in South Australia who has dedicated her exemplary career to the Aboriginal and Torres Strait Islander health sector through roles in nursing, management, policy and research or over two decades.”

Dr Melissa Sweet, managing editor of Croakey, said Dr Mohamed’s work in cultural safety was also important for sectors beyond health, providing leadership for the fields of journalism and the media, as exemplified by her role with Croakey Health Media.

“We pay our respect to Dr Mohamed’s courage and tenacity in standing up against racism in the health sector and more widely, and her contributions towards significant changes in national policy around cultural safety in healthcare.”

Croakey contributing editor and Croakey Health Media Board member Dr Megan Williams, who is Associate Professor, Research Lead and Assistant Director of the National Centre for Cultural Competence at the University of Sydney, added:

“We also admire and benefit from Janine’s leadership and attention to detail in governance, and the management of Aboriginal and Torres Strait Islander organisations. She maintains a high standard, and supports others in the process.”

Dr Mohamed began her career as a registered nurse with the Women’s and Children’s Hospital in Adelaide and a research assistant at the Australian Indigenous Research Institute at the University of South Australia, and at Flinders University.

Dr Mohamed is also an Adjunct Lecturer in the School of Nursing and Midwifery at the University of South Australia, a Board member of the Remote Area Health Corps and the Rosemary Bryant Research Centre at the University of South Australia, and a former Chair of the Aboriginal and Torres Strait Islander National Health Leadership Forum, representing peak Indigenous health groups. In her current role, she remains on several Australian Government expert advisory groups.

In her address to the Edith Cowan graduation ceremony, Dr Mohamed urged graduates to make social justice a central part of their lives.

“All of us, Indigenous and non-Indigenous, must work together so that this truly becomes a fair and just country,” she said.

“We must all stand together in challenging systems that entrench injustice and inequity. Achieving equity does not mean giving everyone the “same”, in the name of fairness; it means providing people with what they say they need, without judgment. It means addressing racism, in all its forms.”

PrevPreviousHopes on new Closing the Gap agreement, systemic reform and funding, after “intolerable gaps” in 2020 report
NextClimate change is a health emergencyNext