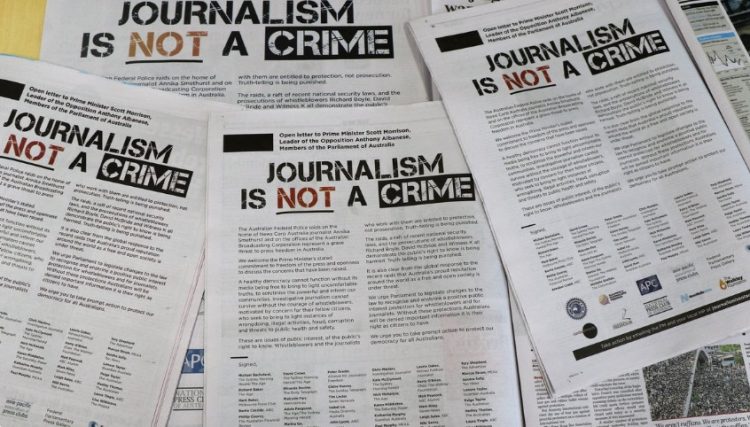 As the Federal Government and Opposition consider options for an inquiry into press freedom and a coalition of media organisations calls for law reform to protect press freedom, Croakey Health Media has released the statement below.

Croakey Health Media has joined with other public interest advocates in condemning recent attacks on media freedom in Australia and calling for law reform to end the criminalisation of public interest journalism.

Croakey Health Media chair Mrs Janine Mohamed said recent raids on the ABC and a News Corporation journalist were unprecedented and unwarranted, and risked making public interest journalism a criminal act rather than an integral part of a healthy democracy.

“These raids, and the extraordinary national security laws behind them, are having a chilling effect upon public interest journalism and whistle-blowers, and undermine the development of public policy in Australia, at a time of increasing threats to public health,” Mrs Mohamed said.

“This will further undermine the interests of many communities and groups whose voices and interests are increasingly underserved and unrepresented, including Aboriginal and Torres Strait Islander people and communities,” she said.

It has been estimated that mainstream media companies laid off about one-quarter of their journalists between 2012 and 2017.

“We are seeing ongoing attacks on the independence and resources of the ABC from the current Federal Government, as well as the loss of specialist journalists and media outlets serving key communities, including rural and regional areas,” Dr Sweet said.

“We call on the Federal Government to protect and uphold the watchdog role of journalists and whistle-blowers.

“The Government also has a responsibility to ensure the sustainability of a vigorous and sustainable public interest journalism sector that contributes to the health and wellbeing of people, families, communities, policies, societies and the environment.”

Marie McInerney, an editor at Croakey and speaking on behalf of the Croakey Health Media membership, said health and science coverage had been one of the biggest casualties in the decline of public interest journalism in Australia in recent years.

“Public interest journalism is a vital antidote to the influence of the powerful interests that shape our health, including the fossil fuels, alcohol, junk food and drink, and gaming industries,” Ms McInerney said.

“Public interest journalism and whistle-blowers have played critical roles in uncovering and forcing policy responses to public health scandals like asbestos, tobacco, and the institutional sexual abuse of children,” she said.

“Through such cases, we know how much protection is required in law for journalism and for whistleblowers, to be able to counter-balance the power of professional and commercial interests, including well-funded industries.”

Croakey supports the MEAA’s call for a range of changes, including:

Croakey also backs the Australian Alliance for Journalists’ Freedom (AJF) call for a Media Freedom Act that would work as a shield law to protect journalism in future from such overreach of national security laws as we have seen under this Federal Government.

Read these articles published as part of Croakey’s campaign for public interest journalism as a critical public health concern:
https://croakey.org/category/public-health-and-population-health/public-interest-journalism/

PrevPreviousWhat do the proposed tax cuts mean for health and inequality?
Next“Language is the crux of everything” – more powerful stories from #LowitjaConf2019Next