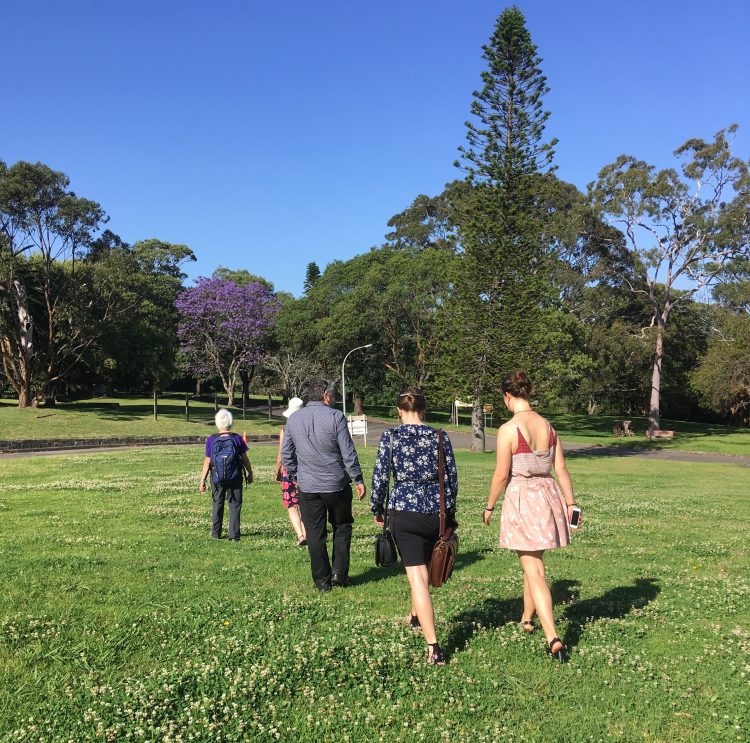 The Quantum Words Festival, hosted by Writing NSW, is a relatively new event. Held for the first time in 2016, the day-long festival exists to “map the moments where science and writing converge”. 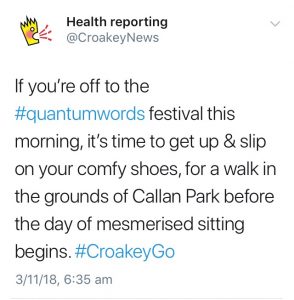 Having more than a passing interest in innovative ways to share ideas about science, the Croakey team decided to get in on the act by offering to host a pre-show CroakeyGO at the 2018 Quantum Words festival.

The idea was to take a short walk through the gardens of the old Callan Park Hospital in Rozelle, where we have previously held a mental health-themed CroakeyGO, and to think about both ways of sustaining public interest science communication, and the crucial role of the natural environment in sustaining health.

On an unseasonably warm morning in early November, a small group assembled in the carpark of Writing NSW’s headquarters – Gary Owen House, an historic building dating from about 1840, in the grounds of Callan Park. 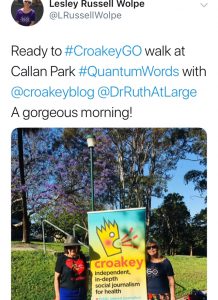 Our first discovery was that science-writing types are not early risers, but CroakeyGO has never been limited by numbers. A small but enthusiastic group, we shared our reasons for being there before heading cross-country, led by Dr Lesley Russell, down the hill to the heritage gardens at Broughton Hall.

Along the way we stopped to some of the many disused and ruined buildings on the site, including the original Broughton Hall, built as a family home in 1841/42, and later donated, along with its magnificent grounds, for use as a facility for shell-shocked soldiers after World War I. From 1921 it functioned as a voluntary psychiatric facility, a key feature of which was the “therapeutic gardens.” 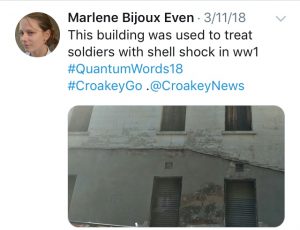 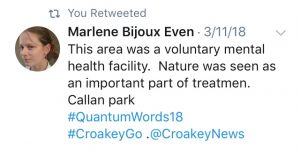 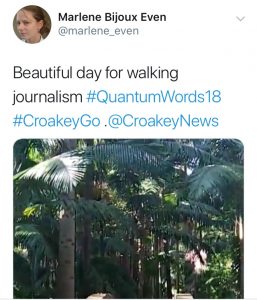 We ventured into the gardens, which included landscaped lawns, massive mature trees, sandstone terracing and ornamental features, a shady rainforest gully with a stream running through it, a towering stand of bamboo, dense shrubbery, meandering paths, and Japanese-style bridges. I half expected to see a cassowary drinking from the pool of water at the bottom of the gully!

As we walked, we talked about how spending time in these gardens must have brought respite and comfort to the many people who have passed through the mental health facility over the years. The gardens now serve as an urban haven for families, dog walkers, and employees and clients of the community service organisations that now reside in some of the old hospital buildings.

The green space is much valued by the community and, as a community member, Sue Steedman, has written previously at Croakey, deserves to be restored to its role as a therapeutic space. 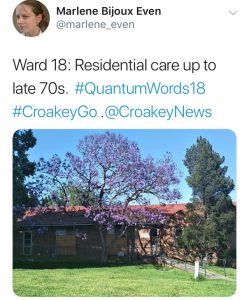 As we spent time in the gardens we became very aware of our own bodies’ and minds’ responses to the cool air and lush greenery.

An added bonus was the presence on the walk of Juan Sepulveda who was attending the festival because of his interest in writing stories that will help citizens and Governments to connect cognitively and emotionally with the urgent need to address climate change.

Juan, who now works at at Sydney’s Royal Botanic Gardens, is a former school teacher who came to Australia from Spain in 1995. He began his training as a gardener the same year, in the very gardens in which we were walking. Juan’s connection to the place and his enthusiasm for nature buoyed our group as we explored the environment, before heading up the hill in the hot sun, in time to participate in the festival.

Special thanks goes to UTS Journalism student, Marlene Bijoux Even, whose tweeting on the day captured and tracked the story of our walk beautifully, and to Myra Opdyke, who was our Writing NSW chaperone for the event. The future of science writing is in good hands! 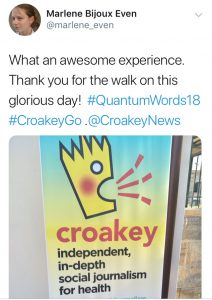 Telling the stories of climate science

Later, in an interview in the gardens, Juan Sepulveda told Melissa Sweet that he had recently come to the understanding that we need to work at the psychological aspects of climate change – to improve communications between the people who understand the science and the rest of the population.

I don’t blame the mass media for that. The scientists are talking to each other but they’re not talking the language of the people. The people are really interested in football, in drama, in comedy. Why aren’t we writing like that? Writing stories, telling the key issues inside of these stories? I am starting to write like that – writing stories with global warming at the centre.”

I feel real concern about the way we are heading as a society. If the majority of the people are unaware of the problem, the problem will continue,”

The walk left us energised and ready to plunge into the material presented at the festival. You can see the program here, and read Myra Opdyke’s wrap of the fascinating first session on the nature of consciousness here.

A great feature of the Quantum Words festival is that it includes writers from across the spectrum – non-fiction, creative non-fiction, fiction, poetry and journalism and more. The panels are balanced according to the different genres, and the audience is also broadly representative of them. This makes for some interesting conversations, apparent in the Tweet Highlights below. 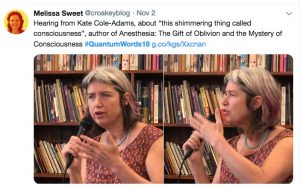 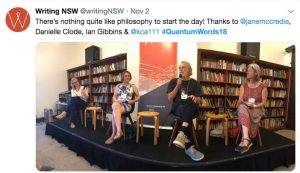 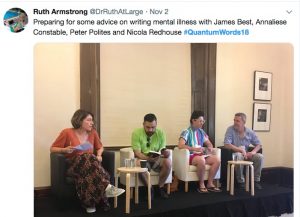 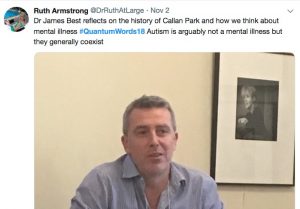 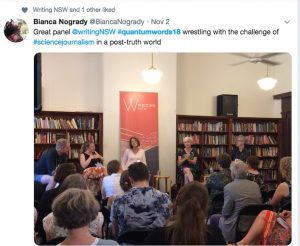 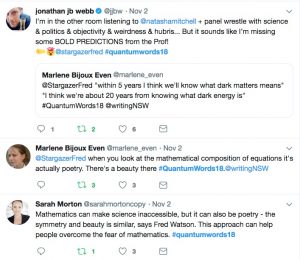 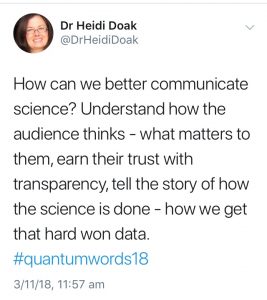 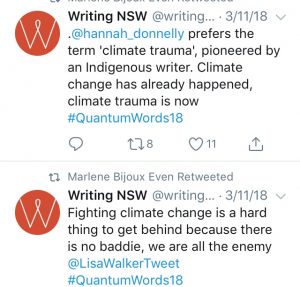 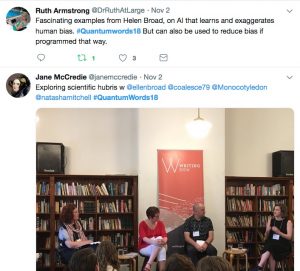 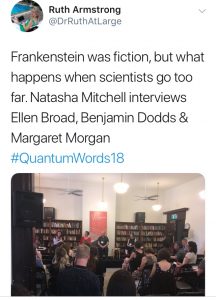 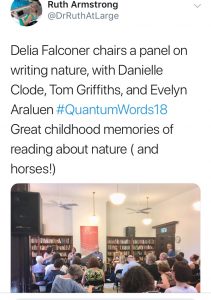 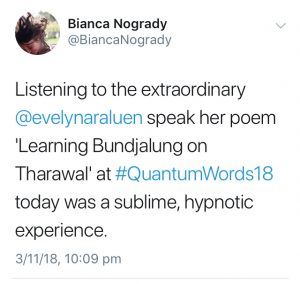 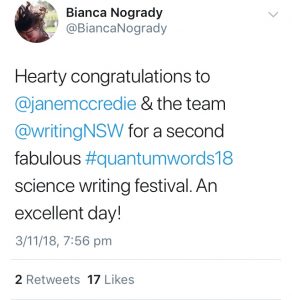 Many thanks to Writing NSW for hosting CroakeyGO at Quantum Words 2018.