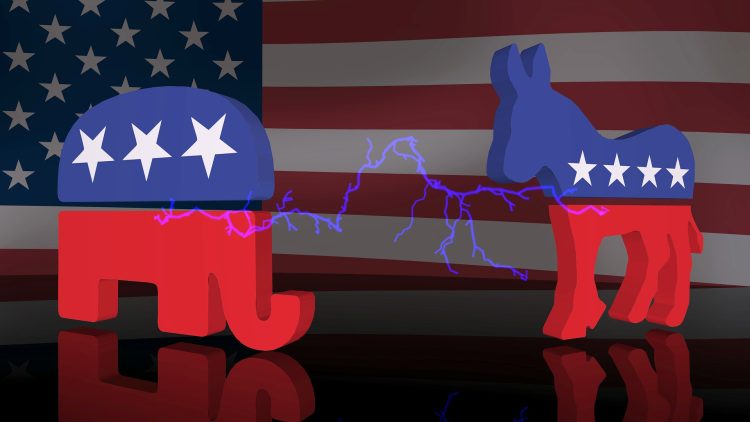 Please join us this Wednesday for the second #CroakeyLIVE online event focussing on the US election.

This event will be moderated by Croakey contributing editor Associate Professor Lesley Russell and James Blackwell, a Wiradjuri man and Research Fellow (Indigenous Policy) at the Centre for Social Impact UNSW.

For people wanting some pre-election reading (and those overwhelmed by the media deluge), Croakey editor, Jennifer Doggett, provides below a selective list of background resources on the election and some tips for following the progress of the vote count on election night.

Getting the most out of the chaotic and crowded election night media environment means striking a balance between relying on a small number of sources (whose coverage may be selective) and being completely swamped by an excess of information.

The best strategy is to curate a mix of mainstream news outlets with expert opinion and analysis via websites, streaming services and social media.

The following watch/read/listen recommendations all have a solid record of political reporting and analysis and should be particularly useful on election night.

The (Australian) ABC and the BBC will run live coverage on election day.

Sky News will provide a more conservatively aligned take on the election than the above broadcasters and go to Fox News for a distinctly conservative perspective.

Both the Washington Post and the New York Times will have a team of journalists providing timely updates and analysis.

Axios (made famous in Australia by Aussie Jonathan Swan’s interview with Donald Trump) will also be providing commentary from around the country.  The Axios app is the best way to access this material.

The United States Studies Centre is a useful source for comprehensive election and political analysis designed for an Australian audience.

Social media is where to get the most immediate reactions as the votes come in.

In addition to the social media accounts of the media outlets above, the following are also worth a follow:

Larry Sabato’s Crystal Ball is a reliable source of predictions and analyses of poll data.

For some background reading/listening and useful commentary on key election issues, the following resources may be useful.

How does the US electoral system work?

For those of needing a quick primer on the US electoral system, this BBC guide is a handy summary.

What are some of the key election issues?

Apart from COVID-19, this election has significant implications for some important issues for the US and the world.

Race: This episode of Matt Bevan’s excellent America are you listening? podcast  discusses Trump’s approach to race relations and how the issue of race will play out this election.

In the Protests and the Pandemic episode of The Michelle Obama Podcast the former first lady discusses the recent protests over racial justice and the state of play of race relations in the US with journalist Michele Norris.

Immigration: Another America are you listening? podcast episode provides a useful background of Donald Trump’s approach to immigration during his presidency.

A report from the BBC provides seven charts which summarise the changes in US immigration patterns over the past four years.

Climate change: The BBC discusses the implications of the election for climate change and the New York Times outlines the differences between Trump and Biden on climate issues.

What are the health implications of the election?

The recent CroakeyLIve event included a panel discussion on the impact of the Trump presidency and the implications of the election for health issues around the globe.

In this analysis The Lancet compares implications for planetary health of a Trump and Biden presidency.

What are some of the key voter groups this election?

This document provides a comparison with voting patterns at recent previous elections.

What are the key states to watch?

This story from ABC (Australia) outlines the battleground states and what their vote counting processes mean for how much we will know about the outcome on election night.

The Checks and Balances, podcast from The Economist does a deep dive into key swing state Florida and the NPR Politics Podcast discusses the state of play in Arizona, Florida, Pennsylvania and Wisconsin.

How could voting issues impact the election outcome?

This ABC story discusses how low voter numbers could affect the election outcome and the Washington Post has reported on the challenges facing many unemployed and poor voters.

Hilary Clinton’s podcast You and Me Both discusses voter suppression and efforts to expand voter rights.

The threats made by Trump to disrupt the election process and the role of the media in promoting accountability throughout the election are discussed in this article from Salon.

Another article from Salon discusses potential problems with mail-in ballots.

What does the election mean for the Senate, city and local government?

While most of the attention is on the presidency, other elections and ballot measures will have a significant impact on the ability of the President to implement policies and the capacity of cities and local communities to respond to and recover from the COVID-19 pandemic.

The most important senate races are covered in this episode of the Pantsuit Politics podcast and this article from the Guardian.

This article from the Brookings Institution discusses state and local ballot measures which will play an important role in COVID-19 recovery for communities across the US.

When will we know the result and who will call it?

The LA Times has a useful summary of election night resources and the Washington Post outlines the likely timing of election results.

This NPR Politics Podcast discusses how and when the media calls an election winner and this article by Axios focusses on Trump’s plan to call a victory if he is ahead on election night.

Estimates of timing of vote counting in different states are provided here by The New York Times.

What post-election scenarios should we be thinking about?

While most polls predict a Biden victory, Bruce Wolpe urges us to consider what could happen if the unexpected occurs and Trump gains a second term.

What are the implications of the election for Australia?

Two useful resources on the implications of the election for Australia are this interview on 7 News with Bruce Wolpe and this ABC story by Ian Verrender.

PrevPreviousCauses of death data 2019: what does this mean for suicide prevention?
NextClimate change central to the Natural Disaster Arrangements reportNext