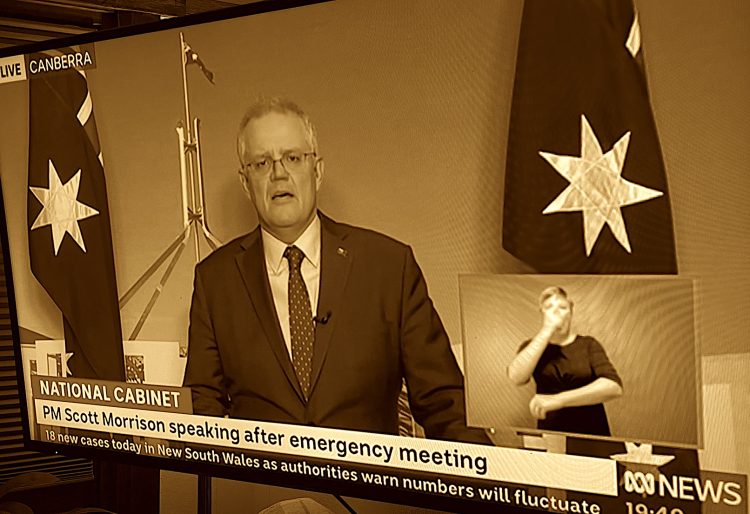 Introduction by Croakey: It’s a worrying and confusing time for anyone trying to make sense of COVID vaccination messaging in the wake of the Prime Minister’s comments after the National Cabinet meeting on 28 June, encouraging younger people to consider AstraZeneca vaccination.

As the BBC reports, the Federal Government’s “flip-flopping advice, as a well as lack of public health messaging has exacerbated widespread hesitancy over the jab”.

In such times, it is doubly important to address the needs of people who are particularly under-served by pandemic communications, according to Victoria Bliss, a global health student at the University of Sydney.

Bliss has been researching pandemic communications for culturally and linguistically diverse (CALD) populations, while watching her Bulgarian-born grandparents source COVID news from Bulgarian television in the absence of accessible local resources.

In the article below, she calls for the principles of respect and self-determination to guide such communications.

Amongst the chaos of the pandemic, contradictory public health messaging and sensationalist news pieces, how did culturally and linguistically diverse (CALD) populations fare?

As a child of first-generation Bulgarian immigrants – one of whom was a refugee – I have often struggled with the cultural and linguistic differences that have separated me and my family from “normal” Australians.

Living with my 80-year-old grandparents (pictured below), who speak little to no English, I found myself growing up with a hyper-awareness of language and difference…of a sense of otherness.

Once COVID-19 hit, the onset of existential fear and paranoia was even greater for my grandmother who suddenly found herself lost and scared, the restrictions placed on movement reminiscent of a Communist-controlled Bulgaria during the Cold War.

Sitting in my living room, the background noise of Bulgarian TV and news channels is ever-present and almost every day there were new headlines theorising why the United States had released the virus, how it was possible to build an “immunity,” why masks were unnecessary – it seemed to go on and on.

Theoretically, this shouldn’t have been a problem.

We live in Australia, a multicultural country at the cutting-edge of COIVD-19 research and public health policy; yet policymakers seemed to forget Bulgarians and others who do not have English as their first language.

The first resource translated into languages other than English published by the Australian Department of Health was a poster on hand-washing hygiene, released on 15 June 2020.

Strangely enough, when I showed this poster to my grandparents just recently, in June 2021, they couldn’t hide their surprise.

They had never seen this poster. Or any poster.

The reality was that these communications were not reaching their target audience.

What use was it to have Bulgarian posters and information published with a three-month delay on a Department of Health website my elderly grandparents never knew existed and would find difficulty navigating online – considering the entire website was still in English?

Delving deeper into the experiences of other CALD groups and First Nations peoples only reinforced my personal observations and hinted at a huge gap in the public health system.

For my studies at University of Sydney, I have undertaken a media analysis of Australian public health communications from the onset of the pandemic. This shows that government health directives fall short in adequately addressing the unique needs of CALD groups.

Amid the proliferation of “fake news” and misinformation, CALD groups are more susceptible to such sources because of their marginalisation and exclusion from mainstream healthcare system and public health advice.

We see CALD groups facing additional barriers to access resulting from economic and social vulnerabilities, what Damian Griffis from the First People’s Disability Network refers to as “intersectional discrimination”.

The response so far

Following the World Health Organization (WHO) official announcement of the global COVID-19 pandemic on 11 March 2020, within a month the Australian Government had committed $2.4 billion to coronavirus support services – $30 million of which was specially designated for public health communications.

Whilst demonstrating a commitment to equity in principle, has government policy really translated into the day-to-day realities of treatment and care options for CALD groups?

The short answer is no. Basic sanitary guidelines and public health information have frequently been mis-translated and failed to be culturally adaptable.

The Australian Department of Health has provided information in close to 60 languages, and yet there are few (if any) Pacific Islander language translations available.

Where translations do exist, they are often too technical and require a high level of health literacy lacking in vulnerable sub-groups such as recent migrants, newly emerged ethnic communities, and elderly persons.

The availability of accurate “information alone will not lead to behaviour change”, as success becomes dependent on ‘partnerships’ of equal footing, writes Helen Skouteris, Professor of Health and Social Care Improvement and Implementation Science at Monash University.

Priorities would better be served by building relationships of respect and trust between public health authorities and diverse groups.

Simply put, good communication is as equally – if not more – dependent on strong relationships with authoritative sources than it is on the content and accuracy of the translated message put across.

Effectively engaging CALD groups necessitates respect and understanding of cultural norms and expectations and – ultimately – the recognition that “there is no one size fits all approach for diverse populations”, Skouteris concludes.

Shaping public opinion in the media

Social and news media has slowly taken over everyday life as we found ourselves at a national standstill, hyperaware of the daily COVID-19 case updates and desperate to explain the origins of the virus and why our lives had suddenly been turned upside down.

Trust in the media as a source of legitimacy and “truth” should theoretically be a good thing in a democratic society like Australia.

However, the politicisation of ethnic Asian populations due to the virus’ Chinese origins has emerged as clear example of this breakdown in trust and the power imbalance between minorities and mainstream media.

Trust in mainstream media suddenly equated to a racialisation of the virus which contributed to pervasive anti-Asian sentiment, with findings from the Lowy Institute indicating more than 30 percent of Chinese Australians have experienced street harassment since March 2020.

The rampant exaggeration and negative media framing of CALD groups has increased fear and distress amongst vulnerable populations through the use of scare tactics and sensationalist news content.

In the absence of a trustworthy local information source, more and more people have turned to their home countries for health advice, which risks being irrelevant to the Australian context or plain misinformation.

Indigenous communities, their success and fight for recognition

When describing the successes of Aboriginal-run interventions late last year, Finlay noted that to move forward:

We need Australian governments and non-Indigenous people to support our effective leadership, and our self-determination for our health and wellbeing priorities and outcomes – and in every other respect.”

It is true that Indigenous communities have seen exceptional results through community-run interventions that have helped to ensure that not a single Aboriginal Elder has died as a result of COVID-19.

These include the provision of care packages of non-perishable foods and sanitation supplies for Elders over the age of 60 living in remote communities, organised by the NSW Aboriginal Land Council.

Moving forward, it is of the utmost necessity that public health interventions for CALD communities be centred around the core values of respect and self-determination.

What does this mean for the future of public health communications?

Well, first and foremost this means recommendations and media releases written by and for CALD populations themselves, an approach that might make a real difference for people like my grandparents.

This concept builds upon the right to self-determination, linking to principles of autonomy.

Ensuring sustainable, long-term change requires opening a dialogue and enshrining these principles of respect and self-determination within the institutional practices of the Australian healthcare and legal systems.

An acknowledgement of CALD successes, capabilities and a positive culture of collective and bidirectional learning will prevent paternalistic pandemic responses and a repetition of COVID-19’s mistakes.

Too often there has been this tendency to reduce CALD groups to one-dimensional definitions as vulnerable populations as merely passive recipients of government interventions.

The reality is very different.

In many cases, CALD-led responses to the COVID-19 pandemic have been more successful than government responses across the globe, and it is imperative that these policies receive adequate respect and recognition.

Declaration: This research by Victoria Bliss was her capstone project for the Master of Global Health at the School of Public Health, University of Sydney, coordinated by Associate Professor Ying Zhang and supervised by Croakey’s Dr Melissa Sweet.