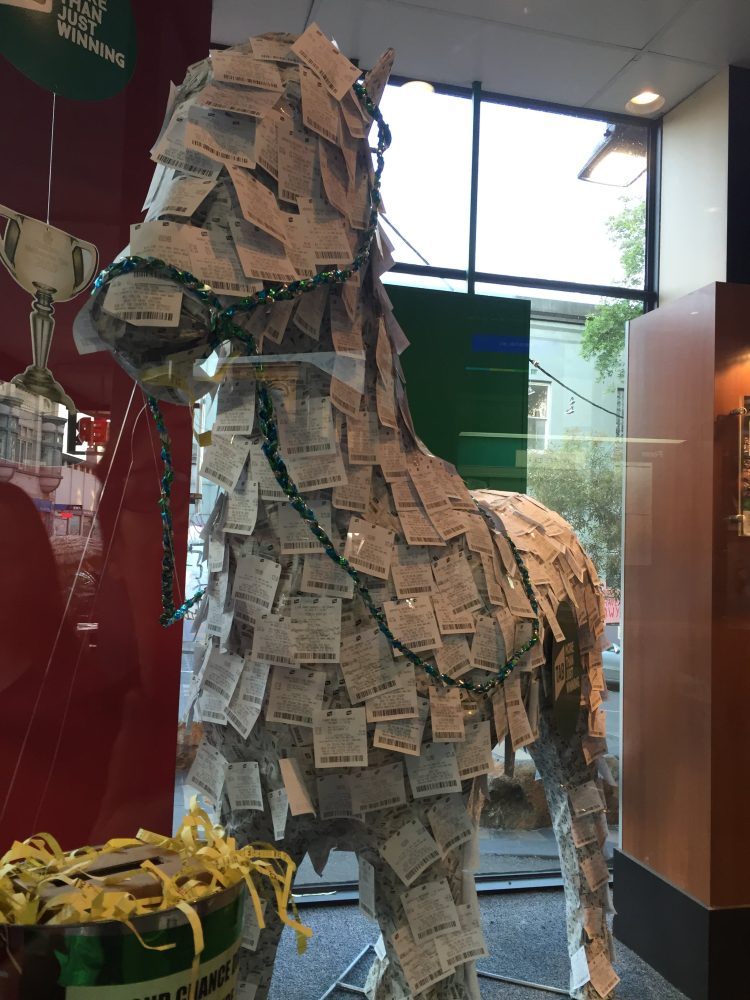 Cup Day: time not for a flutter but for greater transparency & courage on gambling reform

As hundreds of millions of dollars were today fluttered away on the Melbourne Cup, the Alliance for Gambling Reform called for broader advertising restrictions and for politicians, regulators and industry participants to act against the harms.

In a Cup Day statement, the Alliance also called on Australian politicians to lift their game on gambling transparency, saying:

“It’s woeful that we don’t have any gambling loss data since 2014-15, when Australians lost $22.7 billion gambling, an increase of 7.7 per cent on the previous year.”

See this Guardian story on Alliance spokesman Tim Costello’s criticism of politicians who accept invitations to gambling marquees at the Melbourne Cup and related events while also considering legislation to restrict gambling.

In the timely post below, Professors Peter Brooks and Alex Wodak say it’s time to curb the excesses of the gambling industry, which is inflicting such harm on individuals, their families and the broader community.

Australian Gambling to be cut back: don’t bet on it!

Late last month a rally to support Women against Gambling coordinated by the Alliance for Gambling Reform was held outside the Victorian Parliament.

This was supported by (among others) Reason Party Victorian Upper House MP, Fiona Patten, asking community members concerned about gambling to send a message to MPs not to allow a weakening of laws on gambling.

Despite these efforts, the Victorian Legislative Assembly voted 81-3 in favour of issuing new 20-year pokies licences which will generate an estimated $70 billion in losses every year with very little reform or media debate.

Is there any stopping our politicians and the ‘love affair’ governments have with the gambling industry in Australia?

This recent vote reminds us all of the need to speak out against issues such as the Open Letter advertisement widely published in national newspapers last month by John Alexander, Executive Chair of Crown Resorts, in response to serious allegations aired in Federal Parliament by independent MP Andrew Wilkie that Crown Casino in Melbourne had tampered with poker machines and turned a blind eye to drug use and family violence.

In these ‘advertisements’, Mr Alexander paints a rosy picture of the benefits that Crown provides in terms of employment and ‘visitors’ attracted while denying any impropriety as reported by Mr Wilkie.

However Mr Alexander failed to acknowledge any of the very serious damage that Crown and the rest of the gambling industry have inflicted on Australia and Australians.

There was no mention of the fact that Australia has the dubious reputation of having more poker machines per person than any other country in the world! Or that gambling is responsible for the death by suicide of an estimated 400 Australians each year (the relationship of problem gambling with alcohol and drug abuse and with violence and self harm is complex but it seems self evident that gambling contributes significantly to other serious harms).

The estimated social cost of gambling to this county is over $3.9 billion per year. Australians spend $19 billion every year on gambling of which about $13 billion is consumed by poker machines. Gambling adversely affects 5 million Australians every year.

There are more than 500,000 problem gamblers in Australia. The actions of each problem gambler affect 5 to 10 relatives and friends and we have learnt that New South Wales ambulances attend Sydney Star Casino some 170 times a year to resuscitate patrons who have been affected by alcohol or drugs or attempted suicide.

We know that there will always be a market for gambling in Australia but surely we don’t need to lead the world in the way it becomes such a damaging part of our lives.

Surely as a community – and that includes the Chairmen and Boards of Crown and other gambling industry companies – we have a duty of care to make this industry safer and empower more people to take control of their gambling.

If no regulated legal gambling is available, criminals will provide it. But it has to be regulated openly and transparently. The dependence of Australia, and in particular our governments, on the gambling industry for raising revenue really does deserve a broad community debate. We have to ask why governments always give gambling providers whatever they want?

Mr Wilkie and Ms Patten, neither of them members of a major political party, have shone a bright light on this problem. It is no secret that the major parties receive significant donations from the gambling industry. And one would have to be extraordinarily naive to imagine that these donations do not influence our politicians at least some of the way.

Even worse, prominent former politicians such as Mark Abib and Stephen Conroy (Labor) and Helen Coonan (Liberal) act as lobbyists for this pernicious industry. This makes it ever harder for those who wish to expose the evils of this industry to the community.

Full marks to Mr Wilkie, Nick Xenophon and Ms Patten for continuing to raise this issue and encouraging the community to think of a different way of doing business.

As this 2014 article in The Conversation noted,  it is “difficult to imagine a viable gambling industry without rampant exploitation of the Australian working class”. It says:

“Underpinning the gambling industry’s massive transfer of wealth from poor to rich lies a sophisticated (and sometimes not so sophisticated) propaganda that positions gambling as a form of desirable entertainment on the one hand, and a supposed source of economic prosperity on the other.”

So we say to the gambling industry and to the many governments around Australia who benefit from taxing this unhealthy industry: look to the facts and to the pain and suffering that gambling causes.

Understand that while gambling may benefit the Boards and shareholders of the companies engaged in gambling, and benefit governments, surely the enormous cost of having to fund interventions to repair its ‘side effects ‘ and contribution to significantly widening the gap between the rich and poor in Australia suggest that it is time to take a step back and review the whole situation.

It is time Australia and our leaders took a stand. Gambling is one of the worst excesses of capitalism. These issues are mirrored by similar behaviours by companies engaged in promoting commodities that do harm in excess whether they be the sugar industry, fast foods or cigarette manufacturers. And of course the excesses of these industries play into the inequality agenda that is dividing our society. Leaders are increasingly recognising that these days capitalism does not work for everyone.  We need to curb its excesses and put a human face on it.