Cycling helmet laws: what does the evidence really say?

Croakey has run a series of articles this year questioning the laws requiring bicycle helmets to be worn, and the controversy has also been widely canvassed elsewhere in the media.

In another post, Rissel reported on research concluding that it was likely that factors other than the mandatory helmet legislation reduced head injuries among cyclists.

But those findings have been questioned by an analysis of the data by medical epidemiologist Tim Churches.

In August 2010, Croakey published an article titled “Let’s see what happens if we repeal the laws on bicycle helmets” by Clinical Associate Professor Chris Rissel from the School of Public Health at the University of Sydney.

In it, Rissel reported on a research paper written by himself and colleague Dr Alex Voukelatos which appeared in the  August 2010 issue of the Journal of the Australasian College of Road Safety (JACRS), and which set out to examine whether the introduction of compulsory cycling helmet laws in NSW in 1991 had a measurable impact on head injury rates amongst cyclists.

From a series of four observational surveys, commissioned by the NSW Roads and Traffic Authority (RTA) and carried out in September 1990 and April of 1991, 1992 and 1993, it is known that there was an approximately 30 percent decrease in the number of observed cyclists in the the three years immediately after the cycling helmet laws came into force.

Their (sound) rationale for such a study design was that “…even if the number of cyclists has dropped over time, the relative injury rates (head versus arm) should remain unchanged unless some factor is differentially impacting on one type of injury – for example, helmet use reducing head injuries but not affecting arm injuries”.

They then drew a time-series graph of these head-to-arm injury ratios, plotted together with the proportions of cyclists observed to be wearing helmets as reported by the four RTA surveys. Their principal graph, as published, is shown below.

The solid lines in the graph are the ratio of head-to-arm injuries (the discontinuity around 1999/2000 is an artefact, caused by a change in the injury coding system), the dashed lines are the observed proportion of cyclists wearing helmets from the RTA surveys, and the grey bar represents the introduction of the helmet laws.

The authors wrote: “The main conclusion of this examination of the ratio of head to arm injuries over time is that there was a marked decline in head injuries among pedal cyclists before the introduction of mandatory helmet legislation and behavioural compliance, most likely a result of a range of other improvements to road safety.” 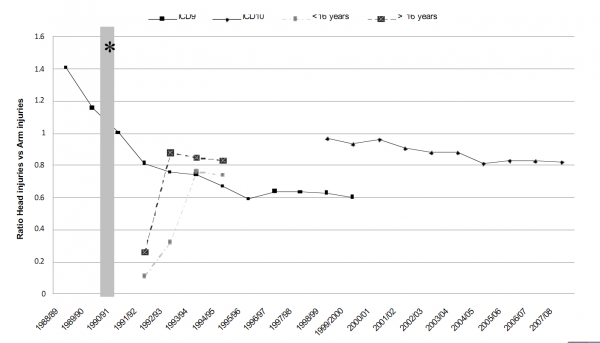 Unfortunately this graph is incorrect.

The four RTA surveys, represented by the dashed lines, were undertaken in September 1990 and April of 1991, 1992 and 1993. The sharp increase in the proportion of helmet-wearers is due to the introduction of the helmet laws.

However, inspection of these lines reveals that they are positioned on this graph about 15 months too late (i.e. too far to the right) – for example, the first point on each line corresponds to the September 1990 RTA survey, but it has been positioned  on the graph half way between 1991/92 and 1992/93 financial year marks. The other points are similarly misplaced. The vertical bar representing the introduction of the helmet laws is also misplaced.

The solid line in the graph represents the ratio of head-to-arm injury hospitalisations in cyclists, and is based on numbers of head or arm injury hospitalisations for all ages, given in the main data table in the paper. The problem is that counts of hospitalisations for each age group in that table do not sum, as they should, to the totals for all ages in the same table – in other words, the numbers on  which the graph is based literally do not add up, a fact which can be verified by the reader with a pocket calculator.

However, if we assume that the counts of hospitalisations for each age group as published in the main data table are correct, and that it is the totals which are wrong, then the graph above should have appeared as shown below, after recalculating the totals and ratios, and correctly plotting the data points. It must be stressed that the following graph is still based solely on the data provided by the authors in their original paper, and that data may contain other errors which cannot be detected merely by examining the published paper. 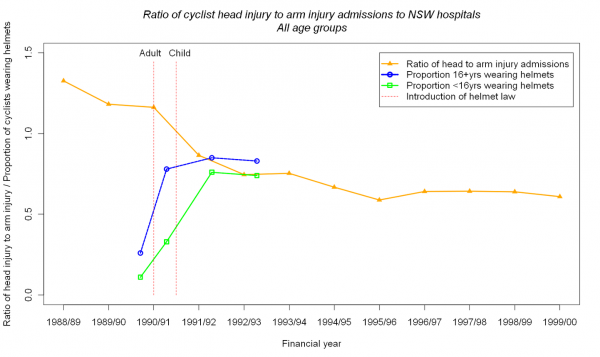 It is immediately apparent that the sharp and substantial drop in the head-to-arm injury ratio coincides exactly with the introduction of the helmet laws and the corresponding increases in the proportion of cyclists observed to be wearing helmets in the RTA surveys.

This is, of course, exactly what one would expect, given that cycling helmets have been shown to help prevent head injuries and/or reduce their severity in many other studies. It is also clear that, when correctly added up and plotted, the data which Voukelatos and Rissel provide in their paper do not support their conclusions.

These errors and other methodological considerations are described in greater detail in a letter to the editors on page 62 of the November 2010 issue of JACRS, which together with the August 2010 issue in which the original Voukelatos and Rissel paper appeared is freely available from the ACRS website.

On the receipt of Tim Churches’ letter, a copy was sent to the authors Dr Alexander Voukelatos and A/Prof. Chris Rissel on 7 October 2010 seeking their response. A reply letter was subsequently received from the authors on 20 October 2010. Both Tim Churches’ letter and Dr Voukelatos and A/Prof. Rissel’s reply letter were sent to four independent reviewers along with the original paper. .…all reviewers unanimously indicated that Tim Churches’ letter should be published in the journal and all supported that his criticisms, his graph and comments appear valid. .…Dr Voukelatos and A/Prof. Rissel have stated in their response: ‘Tim Churches is quite correct in writing that the paper titled ‘The effects of bicycle helmet legislation on cycling related injury: The ratio of head to arm injuries over time’ has serious arithmetic and data plotting errors. We sincerely apologise for these unintentional errors and any confusion that this may generate.’

In his Croakey article about their paper, Chris Rissel called for “…a research study where the legislation is repealed in one jurisdiction (say Newcastle, or Wollongong) and the effects carefully studied over a couple of years.”

It is now clear that the Voukelatos and Rissel study provides no new impetus for the Australian cycling helmet laws to be repealed.

The ongoing effect of the cycling helmet laws, a full two decades after they were introduced, on the uptake of cycling in Australia remains unknown.

There is no doubt that after a decline in cycling participation in all developed countries throughout the second half of the 20th Century, the popularity of cycling has increased dramatically over the last decade, and can now be described as positively booming, helmet laws notwithstanding.

A recent Canadian study*, using data from a large-scale, ongoing population health survey, compared before-and-after rates of cycling in two provinces which introduced compulsory cycling helmet laws several years ago – there was no appreciable change in the numbers of people cycling after helmet laws were introduced. This may be because cycling helmets are now cheaper, more readily available, better designed and more generally accepted than they were two decades ago.

Although it is likely that some cyclists (and potential cyclists) would prefer to ride bare-headed, the critical question in 2010 is: how many people choose to not cycle because they must wear helmets? The Canadian data suggests that their number is few.

The Voukelatos and Rissel study was widely reported in the mainstream media both here and overseas at the time it was published, and it continues to be discussed in the cycling blogosphere. The fact that their findings were wrong needs to be equally widely reported.

Somewhat ironically, Chris Rissel is scheduled to present a paper to the Australian Cycling Conference, in Adelaide in January 2011, titled “A content analysis of Sydney media coverage of recent mandatory helmet legislation discussions.” It promises to be an interesting talk.

The final report of the inquiry was released recently, and it includes a number of recommendations covering cycling accident data collection, improvements to cycling infrastructure, and better driver education and training about cyclists and their safety. Regarding cycling helmets, the report noted that “…although there are divergent positions on this issue, the majority of submissions and the bulk of evidence received by the Committee support the current mandatory use of helmets for bicycle riders”.

• Tim Churches is a medical epidemiologist with two decades of experience in the use of routinely-collected health data to evaluate public health issues. He has been an enthusiastic, although rather slow, cyclist for most of his life.