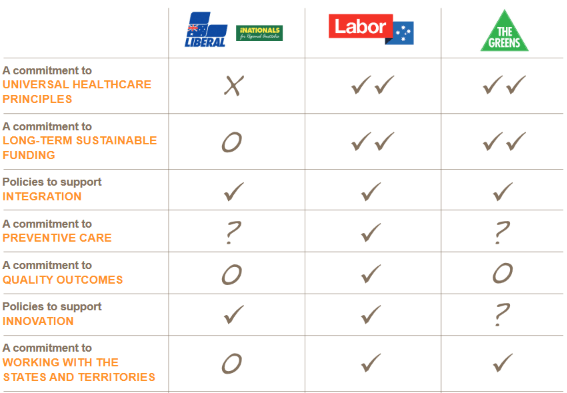 The Australian Healthcare and Hospital Association (AHHA) has delivered a damning scorecard on the Coalition Government’s performance and promises on health, giving it just two ticks for positive policies in the leadup to the July 2 election (see image above and more detail below).

The Coalition was rated particularly poorly for its commitmen 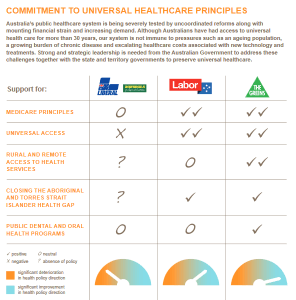 ts to universal health care, and singled out for the negative impact of its policies freezing payment indexation and raising the possibility of co-payments for health services.

The verdict came as Prime Minister Malcolm Turnbull announced the Coalition would not go ahead with long-held plans to privatise Medicare’s payment system, in the face of Labor leader Bill Shorten’s declaration at his official campaign launch on Sunday that the election is a “referendum on Medicare“.

There’s been much debate in the media on whether privatising the Medicare payments system is “really the same” as privatising Medicare, but Gratton Institute health policy expert Stephen Duckett said Turnbull’s weekend announcement represented a massive policy reversal. He told Radio National:

What happened yesterday was that the Prime Minister very clearly hit that on the head. It’s a massive reversal of their policy, just a month or so ago they outsourced the cancer registers so they were steaming down the path and it stopped.

But others, including former Prime Minister and Cabinet secretary John Menadue, said the Coalition has been “eroding Medicare from within” for years.

See his post below on Privatisation and the hollowing out of Medicare from his Pearls and Irritation site, which also criticises Labor for rarely mentioning the damage of PHI.

Distancing himself as far as possible from Medicare privatisation, Turnbull today said there had been “no decision taken to outsource any part of Medicare”. He told a media conference:

That begged an important question from The Australia’s health and freedom of information editor Sean Parnell on Twitter: 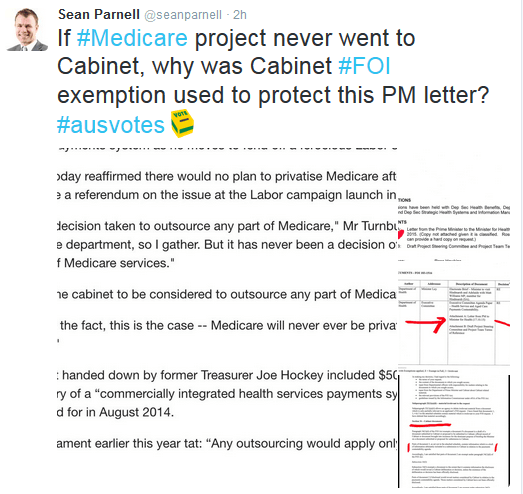 But there’s been clear intent from the government since August 2014 when the Federal Government called for Expressions of Interest (EOI) from the private sector to provide claims and payment services for Medicare (MBS) and the Pharmaceutical Benefits Scheme (PBS).

The proposal hit the news earlier this year when the West Australian revealed the scope of potential outsourcing and that Australia Post, eftpos poviders, Telstra and the big banks were showing interest in the payments contract, with foreign multinationals also thought likely to bid, including Serco, Fuji-Xerox and Accenture.

See this Croakey post which raised concerns about the proposal at the time expressions of interest were called, and this piece by Margaret Faux, managing director of one of the largest medical billing companies in Australia, when the Prime Minister argued that the proposal was about finding a ‘more efficient way of transacting with citizens, with patient, consumers’.

Croakey has asked the Health Department for further information about the status of the process, including any potential costs of scrapping the proposal. We will update the post with any response.

Turnbull today he repeated his weekend pledges on Medicare:

In response, Labor says the Coalition wants to “tear down Medicare, brick by brick” and points to its performance this term when it:

If Mr Turnbull doesn’t want to privatise Medicare, why is PricewaterhouseCoopers currently being paid to progress the privatisation of Medicare payments?

If Mr Turnbull doesn’t want to privatise Medicare, why have the Liberals tasked the Productivity Commission to look at how essential services like Medicare could be privatised?

In this interview this morning on Radio National Breakfast, Stephen Duckett agreed the Medicare payment processing system represents the “copper wires of the Medicare system” and is in need of renovation. Also on the program, AHHA CEO Alison Verhoeven agreed, saying Medicare’s online services are currently “woeful” but said data governance security and decision-making about entitlements “must remain in government hands”.

She said the Prime Minister’s decision to scrap the outsourcing proposal was interesting given the Productivity Commission inquiry underway at the moment, “for which Medicare is in scope”.

“Their interviewers are out around the country at the moment talking to key stakeholders and there has been a procession of companies coming through Canberra, international and Australian, seeking to discuss with Ministers and health bureaucrats the very privatisation of Medicare…”

We will update this post if the Prime Minister reveals any further details during his solo appearance tonight on ABC’s Q&A program.

Health on the agenda

It’s all meant that we now head into the final two weeks of the election campaign with health at the top of the agenda, and the focus is not only – for the moment, at least – on hospital funding but about the principle and practice of universal health care.

(Asked also about the ‘black hole’ of hospital funding that has dominated mainstream health cover of the election to date, Duckett said the analogy “sucks both reason and light out of the debate”.)

The AHHA has sought to bring more light to the debate with the release of its election scorecard which says Australia’s public healthcare system is being severely tested by uncoordinated reforms along with mounting financial strain and increasing demand.

It found that health issues including the Medicare rebates freeze, public hospital funding and co-payments have hit the spotlight in the lead-up to the election, but other vital issues such as Aboriginal and Torres Strait Islander health, and quality care have been underplayed.

The Coalition has made some amends for the damaging cuts in the 2014-15 Budget, but some policies continue to exacerbate issues of access, equity and sustainability. Labor’s support for universal care is welcome, but further development of the party’s reform proposals will be important. The Greens are strong supporters of universal care and have announced positive policy proposals, but gaps remain.

See also Verhoeven’s piece in MJA Insight, with the note that it was written prior to the weekend announcement by Labor of its preventive health policy. 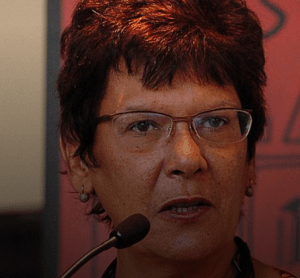 Croakey readers might also be interested to listen to this timely broadcast by Larissa Behrendt, featuring an interview with Pat Turner (see photo, right) the new CEO of the National Aboriginal Community Controlled Health Organisation (NACCHO).)

Turner talked about the “absolute disaster” of the Coalition Government’s Indigenous Advancement Strategy and called for the re-establishment of an Indigenous Affairs Department and nesting of particular programs in Health. She said:

“At the moment I think our people feel alienated and estranged rom a system that is there supposedly to help them. Sitting in Prime Minister and Cabinet is just too remote.”

Discussing the recent landmark Redfern Statement, Turner called for adequate funding for Aboriginal community controlled health services and an end to the freeze on Medicare rebates, which was cutting income for frontline Indigenous health services.

“It’s squeezing our health services in terms of their capacity to respond to the very serious health needs that exist in our communities,” she said.