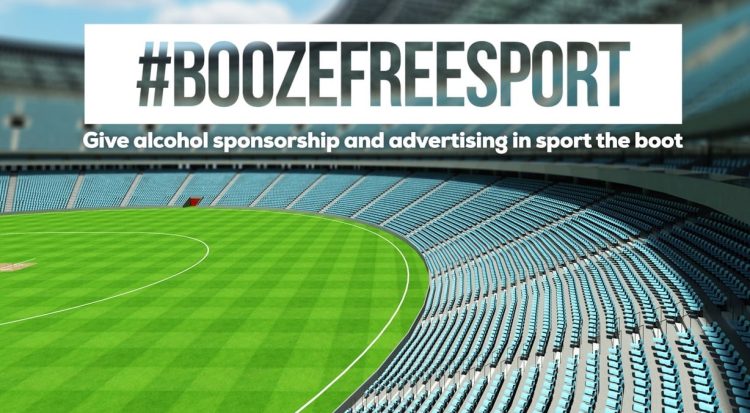 Almost 30 years ago, when David Hill was President of the North Sydney Bears Rugby League Football Club and a public critic of tobacco sponsorship of sport, he was disappointed by the lack of support from sports administrators for his stance.

No senior sports administrators, whether from Rugby League or more widely, ever said even a private “Good on you, David”, he recalls in an interview released today by the Foundation for Alcohol Research and Education (FARE).

In the article below, Michael Thorn, Chief Executive of FARE, calls on Australians to become catalysts for change, and to use the new #BoozeFreeSport website to contact MPs. “We can’t stand idly by and wait for the sporting codes to choose to do the right thing,” he says.

(And do make sure to watch the full interview with David Hill at the end of the article.)

The countdown is on. We’re less than two weeks away from the footy grand finals. As we prepare for the barrage of footy coverage, we also need to steel ourselves against the torrent of toxic alcohol advertising that will assault our senses. But of even greater concern is the negative impact on our children.

Just 22 years ago it was another toxic drug, tobacco, playing a starring role in our sporting landscape.

The Cup was retired after the 1995 season, with Winfield forced to withdraw their sponsorship of the Premiership following the introduction of the Tobacco Advertising Prohibition Act in 1992.

This week, together with our campaign partners, the Public Health Association of Australia, McCusker Centre for Action on Alcohol and Youth, St Vincent’s Health Australia, the Royal Australasian College of Physicians, the Royal Australasian College of Surgeons and the Australian Health Promotion Association, we’re ramping up our efforts to remove alcohol sponsorship from sport.

You can check out our new website, www.boozefreesport.com.au today.

We’re kicking off the week with an interview with author David Hill, and the lessons he learnt in his fight to remove tobacco sponsorship from the sporting landscape.

Former ABC journalist and Walkley Award winner, Di Martin spoke with David Hill, who as President of the North Sydney Bears from 1989 – 1992 was an outspoken critic of tobacco sponsorship.

At the time, his message was not warmly received by the code or the other clubs.

Today he is damning of Australia’s sporting codes saying, “Sporting bodies have proved that faced with the choice between doing what is morally right, or taking the sack of money, they are most likely to take the sack of money”.

Fast forward three decades and there is little evidence that our sporting codes are willing to behave any differently, clinging stubbornly to alcohol sponsorship, despite evidence that makes clear that children exposed to alcohol advertising are likely to drink alcohol earlier and to drink more.

And at a time when our major codes are, by their own admission, doubling down on making their games more attractive and popular with families.

Will a major sporting code break from the pack, step up and sever their alcohol sponsorship arrangements, not because they have to, but because it is the right thing to do?

David Hill dismisses that argument, as do I, and notes, “Sport is the most popular TV programming in Australia. That’s what sponsors want. So if it wasn’t the alcohol industry or the tobacco industry it’ll be somebody else”.

Ultimately we can’t stand idly by and wait for the sporting codes to choose to do the right thing.

So this week, I call on Australians to become catalysts for change.

Contacting these members of Parliament will let them know that you care about this issue, and that you want them to address your concern. The more people they hear from, the more likely they are to act.

Watch the interview below