Mainstream health promotion has failed Aboriginal and Torres Strait Islander peoples, according to Karen McPhail-Bell, a PhD candidate at Queensland University of Technology.

In the article below, she argues that those working in the field could learn from strengths-based programs like The Institute for Urban Indigenous Health’s Deadly Choices. It offers lessons for all health promotion practice, she says.

Her challenge is timely, with the Public Health Association of Australia’s 43rd annual conference starting in Perth tomorrow (follow #PHAA2014 for Twitter news from the conference).

The concern here is not the concept of health promotion; nor is this an attack on the many practitioners who work hard to achieve health for all. Rather, issue is taken with the institution of health promotion and its application, which has often fallen short of effecting change for Indigenous Australians.

Mainstream health promotion has been unable to effectively engage with the social, cultural and political context of Indigenous Australians. We often see instead a preoccupation with individual risk factors, such as the holy trinity of substance use, nutrition and physical activity, and their associated behavioural and lifestyle interventions (Baum & Fisher, 2014; Porter, 2006; Raphael, 2006).

Shaped by this fixation, a mainstream health narrative exists, promoting how to live better, healthier lives. Critiques of the foundations of health promotion practice have challenged this (Bond, 2007; McPhail-Bell, Fredericks, & Brough, 2013), with concern that Indigenous people who ‘fail’ to uptake and practise the healthy lifestyle message are further stigmatised (Bond, Brough, Spurling, & Hayman, 2012; Sherwood & Edwards, 2006). Moreover, debatably, little political will exists for learning from Indigenous people and communities (Cox, 2014; NACCHO, 2014a).

However, new strengths-based ways of practicing health promotion exist, which centre Indigenous knowledge, perspectives and practices. Mainstream health promotion practitioners could learn from those who operate at this interface.

IUIH represents a partnership between local Aboriginal Medical Services and is part of the community controlled health sector – a sector which has reduced unintentional racism, barriers to access to health care, and are progressively improving individual health outcomes for Aboriginal people (Holland, 2014; NACCHO, 2014b; Panaretto, Wenitong, Button, & Ring, 2014).  IUIH’s Deadly Choices initiative is an umbrella for its health promotion activities.

Unlike traditional health promotion typically driven by experts, Deadly Choices employs a unique model of leadership for behaviour change. In this inclusive approach, “everyone can be a leader” by way of their choices: one leads by the example they set, rather than position they hold or message they preach.

Leaders are distributed throughout community: as role models, ambassadors, as family, as influencers of change. IUIH’s diverse preventative health team also endeavours to be leaders themselves.

The expression of leadership shifts according to context and involves standing out, but not too much. Being a leader means making deadly choices: from a healthy lunch, to studying for a dream job, to looking after each other – in other words, choices across the social determinants of health (for example, Figure 1 and Figure 2).

Figure 1: One family’s deadly choices involved family time, being active outdoors: “Deadly Choices now = Deadly Buraay’s for the Future. Could not just choose one as so many of our choices now will affect our kids in the future” (April 2013). 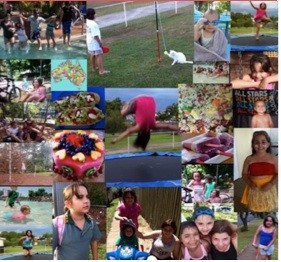 Figure 2: A parent shares their son’s deadly choice: to get an education (July 2013). 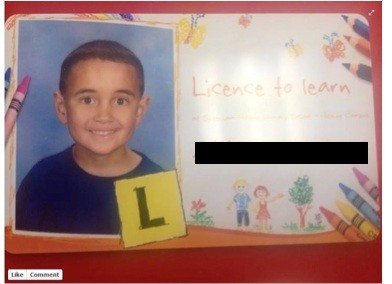 Deadly Choices is based on community-driven concepts of health and engagement.

With the question, “What’s your deadly choice?” an ongoing conversation between the health practitioners and community, and within community, takes place. Community members share and promote their deadly choices, thereby co-constructing the brand and concepts of health underpinning Deadly Choices.

Social media provides a platform for dialogue and interaction, facilitating a sophisticated connection point to the community Deadly Choices serves. Deadly Choices merchandise, available only by earning it, enables people to assert their connection to Deadly Choices in tangible ways (Figure 3).

A range of schools programs, community events, camps and other programs are also in place, with developing evidence on their effectiveness (Malseed, Nelson, & Ware, 2014; Malseed, Nelson, Ware, Lacey, & Lander, 2014)[2],[3].

Figure 3: A group of community members are awarded their Deadly Choices jerseys for participation at a community event. Jerseys and hoodies have to be earned and hold value in the community (photo provided by IUIH 2013) 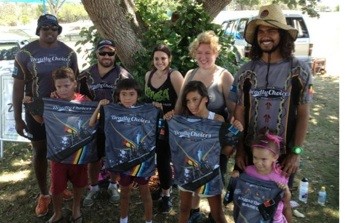 Existing leadership is acknowledged and showcased (Figure 5), presenting a counter-narrative to the deficit focus of mainstream health promotion practice and narrative. The narrative is positive, inclusive and proud, and controlled by Indigenous people.

Figure 4: A Deadly Choices ambassador shares the importance of being Aboriginal (November 2013). 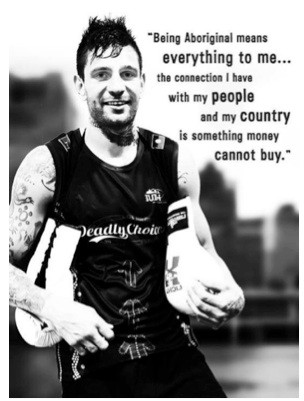 Indigenous leadership is paving the way for health promotion practice.

** I use the term Indigenous Australians to refer to both Aboriginal and Torres Strait Islander people. I acknowledge that the term Indigenous has been co-opted politically by descendants of settlers and that growing debate surrounds the term (Australian Human Rights Commission, 2009). However, this research has further reaching implications than Australia, and draws on knowledge beyond Australia. Therefore I use the term “Indigenous” – carefully, aware of its limitations and hopeful that I have achieved a respectful use of it.

I acknowledge and thank the wisdom, sympathy and encouragement of: IUIH including Ian Lacey and Alison Nelson; my supervisors, Associate Professor Mark Brough, Dr Chelsea Bond and Professor Bronwyn Fredericks; and the numerous participants involved in my PhD research. All of you inspire me and continue to influence me. Thank you.