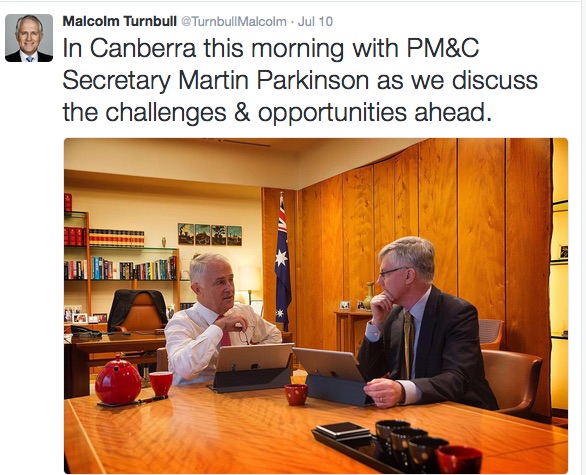 ...and now for your health briefing, PM

Dear PM, You have a health problem. Let us help…

Clearly you are in some serious need of life-saving health advice. As you have yourself admitted, the Coalition has to “do more to reaffirm the faith of the Australian people in our commitment to health and to Medicare”.

Croakey to the rescue. We offer three ideas to help re-make you as a visionary leader for health.

1. Establish a new over-arching portfolio: The Ministry for Health in all Policies

This is a really tough gig, as the Minister will be charged with working across all portfolios to assess the impact of all policies upon the population’s health, and particularly upon health inequities.

This will require a Minister with sufficient authority to take on the silos and vested interests that tend to dominate policy making.

So, why not appoint yourself to this position – what a strong message that would send on your commitment to improving Australians’ health.

Given how poorly policymakers generally address these concerns at present, there is untapped potential here for you to make your mark.

At Croakey, we generally detest the use of the word “breakthrough” in stories about health and health care. But do this, and we would happily describe this as a great breakthrough for health. In fact, we might even call you the Prime Minister for Breaking Through on Health.

Get up to speed quickly with some background reading: a Senate Standing Committee on Community Affairs report from 2013: Australia’s domestic response to the World Health Organization’s (WHO) Commission on Social Determinants of Health report “Closing the gap within a generation”.

Or, here’s a short version, to get you started. 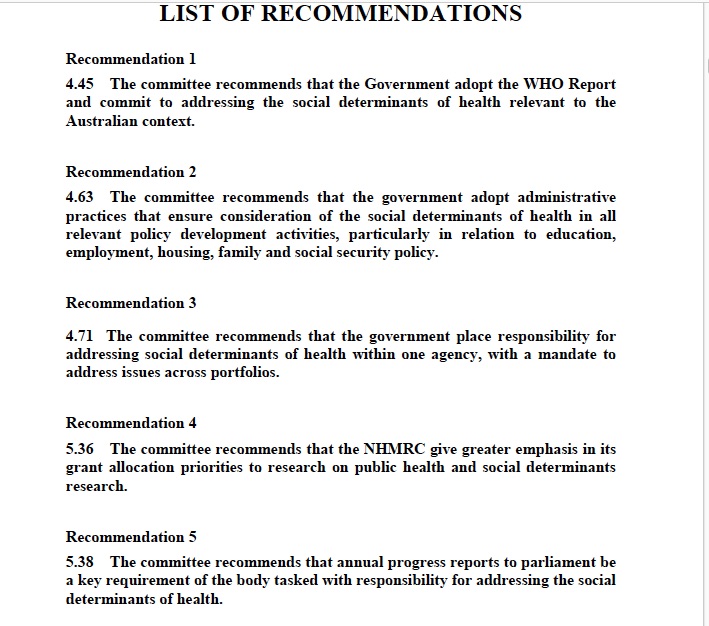 As a by-the-by, perhaps if you focus on the health impacts of climate change in public debate, this might help strengthen your arm for effective climate action.

Here you can find some handy graphics from the World Health Organization for sharing on your social media channels.

2. Identify an area crying out for national leadership, where you could really make a difference.

Wearing your new hat, as Prime Minister for HiAP, you have come to understand that the over-incarceration of Aboriginal and Torres Strait Islander people is a critical health concern where your new cross-portfolio clout could have an impact, and across jurisdictions too.

Again, while this is a challenging policy area, a lot of the hard work has already been done; you don’t have to start from scratch.

This Senate inquiry report, Value of a justice reinvestment approach to criminal justice in Australia, should give you plenty of leads. It recommends, amongst other things, that COAG establish Justice Targets and supports further trials of Justice Reinvestment.

You can also draw on the recommendations from the Change the Record coalition’s election priorities statement.

While you’re at it, make sure to find some $s to enact the Implementation Plan for the National Aboriginal and Torres Strait Islander Health Plan 2013-2023.

Three years have already passed since the Health Plan was finalised; any further delays have a real cost in terms of people suffering potentially preventable illnesses and poor care.

As Indigenous health and human rights advocate Professor Tom Calma told Croakey this morning, these are three useful reports now sitting on the shelf – the Senate inquiries on SDOH and Justice Reinvestment, and the Implementation Plan.

Rather than letting them continue to gather dust, he urges you to revisit them, and build on the foundations they have laid.

“I urge him to work closely with representative groups like the National Health Leadership Forum (NHLF) as Senator Nash did so respectfully in developing the Implementation Plan,” said Professor Calma. “This is the only way we will see immediate and sustainable changes to close the gaps.”

3. Become the best friend of Medicare

Wearing your new hat as “the PM for Health”, you have a greater appreciation of the importance of universal healthcare, and how this is being undermined in Australia by increasing out-of-pocket costs.

A useful way to neutralise the Opposition on health policy might be to steal one of their more sensible ideas.

Before the election, Bill Shorten and co promised to establish a permanent Australian Healthcare Reform Commission to work with all levels of government to ensure a continuing process of health reform.

Given the complexity of the health reform environment, the need for sustained and ongoing efforts at health reform, and the inadvisability of relying on “the market” to drive health reform, this Commission – if sufficiently empowered in the public interest (rather than professional, bureaucratic or private interests) – could be very useful, not least in helping to demonstrate your genuine commitment to a healthy future for Medicare.

This would also help to distinguish your government from the Abbott Government, who are remembered for their destruction of a national health reform process that had taken years of work and represented a significant investment of resources.

Establishing a permanent, independent body to drive and inform health reform focused on prevention and population health and an equitable, efficient and quality health system could help us to re-imagine your Government as builders, rather than destroyers.

Hopefully, this Commission might also help give you a more useful source of policy advice than the current AMA president, whose apparent support for revisiting the co-payments fiasco, will only land you in hot water.

Meanwhile, if you truly want to reposition yourself as a PM for Health, then have a read of this timely and helpful article by the US president, Barack Obama, just published in The Journal of the American Medical Association: “United States Health Care Reform: Progress to Date and Next Steps”.

While it obviously is written in the context of US healthcare, some of its wider themes are relevant here, not least in highlighting the power of national leadership in healthcare reform. Apparently, POTUS is receiving lots of “Twitter love” for his efforts.

Given the LNP’s close electoral shave – or, as your colleague Eric Abetz prefers to call it, the “big kick up the pants”– there is both the imperative and the opportunity for you to make your mark in health.

We live in hope.

P.S. If you would like a complimentary subscription to the weekly Croakey digest, please don’t hesitate to ask. We would be delighted to arrange this.