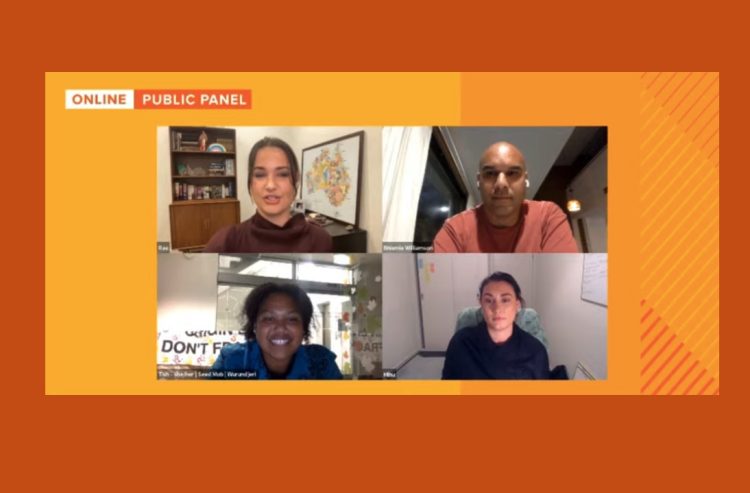 Leading the fight for climate justice

Introduction by Croakey: Aboriginal and Torres Strait Islander people are leading the fight for climate justice and climate action in Australia, but continue to be left out of critical national work on bushfires and other climate disasters, a First Nations Climate Justice webinar heard recently.

The all-Indigenous panel discussion heard that Aboriginal and Torres Strait Islander knowledge holders and communities “shouldn’t be fighting for space anymore” in climate policy and research, and that climate and emergency action should recognise their deep connections to country.

This article is published as part of Croakey’s contribution to the global Covering Climate Now collaboration.

Indigenous researcher Bhiamie Williamson had to stop to hold back tears when he was asked last month whether Aboriginal communities along Australia’s east coast had recovered from the devastating 2019-20 bushfires.

“No,” he said after a pause. “I think there is just a deep and unending sadness that lingers in those places, you know, and may do for the rest of their lives,” he told the First Nations Climate Justice webinar hosted by the Climate Council and Emergency Leaders for Climate Action.

“Community recovery and the recovery of the natural environment — for us, they’re the same thing,” said Williamson, who is a Euahlayi man from northern New South Wales and a researcher on Indigenous land and water management, governance and data sovereignty.

Williamson and his fellow researchers at the ANU have conducted extensive research in the wake of the 2019-20 bushfires. Their mapping has shown that Aboriginal and Torres Strait Islander people made up 2.4 per cent of the population in New South Wales, Victoria and the ACT, but 4.8 per cent of the population of areas directly impacted by the fires.

That’s important to know and take into account in bushfire preparation and responses, he said, but the demographics still only tell one part of the story.

What’s not captured by the statistics is “the incredible impact that those kinds of events have on people who are from that place: people who care for that country, people who associate with that country, including certain parts of that country like landscapes, plants, animals, seasons, waterways”.

Yet, despite that strong and enduring cultural connection, Aboriginal and Torres Strait Islander people have remained largely “invisible” in bushfire inquires and royal commissions over decades, he said.

The inquiries, including Victoria’s Black Saturday Royal Commission just a decade ago, tend to refer only to historical connections to country, rather than understand how those fires and other climate disasters like drought, floods and king tides impact Aboriginal and Torres Strait Islander people today and “in a way that is different to non-Indigenous people,” he said.

“What happens when those totemic plants and animals species are wiped out of the landscape and don’t return — what does that mean for the cultural continuity of the community?” he asked, noting  that being able to prove connection to country is imperative to native title yet under growing threat from climate change.

Williamson was not alone among the all-Indigenous panellists in sharing raw personal stories of grief, anger and frustration in the discussion on the frontline impacts of climate change and the ongoing marginalisation of Aboriginal and Torres Strait Islander voices, issues, and solutions.

Moderator Rae Johnston, a journalist and Wiradjuri woman, told the event she had grown up in the New South Wales Southern Highlands, on the edge of where the Green Wattle Creek fire burned in 2019. She had spent weeks out there with her family fighting back the fires.

“That big fireball that came through was 100 metres from my parent’s place,” she said.

“And there’s a lot of trauma that you carry from being there, from the knowledge of…what was lost in that place and that you don’t see reflected in any of those Royal Commissions,” she said.

Also on the panel was Tishiko King, a community organiser with the Seed Indigenous Youth Climate Network (known as Seed Mob) who has been working to support the Our Islands Our Home campaign, which includes the formal complaint against Australia to the United Nations by the Torres Strait Eight for failing to protect the Torres Strait islands from climate damage.

King is a Kulgalaig woman from Masig (or Yorke in English) island in the Torres Strait. She told the webinar she had returned to her family’s home late last year to meet one of the Torres Strait Eight and saw the devastation of the king tides up close.

“It was so emotional… I had to pick up the bones of my Elders because erosion is damaging our burial sites,” she said.

“As First Nations people, we know that these are the spirits of our old people, and it’s a sign of disrespect, it’s desecrating who they are,” she said, warning that global warming threatens to make Torres Strait Islander people “refugees in our own country”. 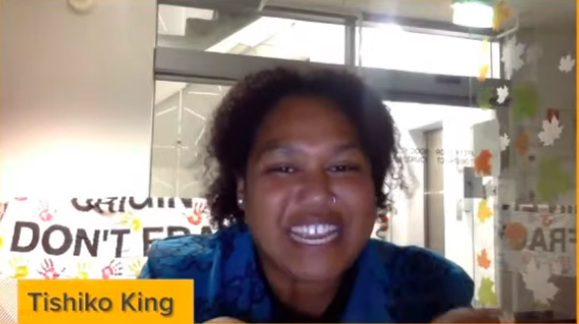 Amid such threats, Australia is seeing growing recognition of Indigenous knowledges and knowledge holders, said their fellow panellist Mibu Fischer, a Quandamooka saltwater scientist and early career marine ethno-ecologist with the CSIRO.

Fischer said she is among a group of Indigenous authors who have been invited by the Federal Department of Agriculture, Water and the Environment to contribute to Australia’s 2021 State of the Environment Report, the five-yearly stocktake which is due to be released in early 2022.

The Department is making much on its website of more diverse voices in the 2021 report, noting (welcome but worryingly) that this is the first time to have both female and Indigenous leadership in its production.

Shifting these understandings is slow, hard work, says Fischer, who is currently based in lutruwita/Tasmania, where her work involves setting up research opportunities with Traditional Owners and advising other marine scientists and researchers how better to engage and work with First Nations communities.

She urges them to not just provide “a seat at the table….(but) be prepared to go and sit on the beach or under the tree and have those genuine connections and relationships with community members”, and to be prepared to both recognize and pay for Indigenous knowledge.

“It’s not free, you need to be genuine,” she said.

Fischer is part of an oral history project with palawa Elders in Tasmania who have observed changes to the thickness and abundance of the shells they have used to make necklaces, “so we’re using traditional knowledge to create a baseline study on that.”

But, despite positive steps, Fischer said she still sees a lack of respect among her peers for traditional knowledge and knowledge holders.

“I think a lot of people, when they get the opportunity to be in a room with knowledge holders are challenged and because they’re challenged, (because) they don’t understand what’s going on, they just go in for the kill, like (saying) ‘that’s wrong, what you’re saying doesn’t make sense’.”

People need to start asking themselves, ‘Why am I uncomfortable with this?’, she said.

Bhiamie Williamson sees the same problem manifest at a structural level, saying Aboriginal and Torres Strait Islander knowledges and researchers are welcoming many new allies to their work but “still struggle to get allyship in the really big institutions in this country”.

Despite a surge of interest in Aboriginal and Torres Strait Islander land management knowledges in the wake of the bushfires, he says that “sheer wilful ignorance” within non-Indigenous organisations or institutions means that interest is still not translating into policy and research agendas.

He told the webinar he was shocked to see a lack of focus in the recent discussion paper from the new Bushfire and Natural Hazards Cooperative Research Centre.

The CRC defended itself on Twitter, saying “the research program doesn’t exist yet and we are inviting input on what the new natural hazards science should look like”.

But Williamson later told Croakey “the real issue is how Indigenous knowledges, histories, land management practices and more, could have been left out, or very poorly represented, in such a strategic document in the first place. It doesn’t send the right message”.

Williamson, a current member of the ACT’s bushfire council, welcomed the recent funding announcement from the Victorian Government of $22.5 million investment to “reinvigorate Traditional Owner-led cultural land and fire management practices”, saying Victoria was “really starting to streak ahead with this stuff, compared with the Federal Government or other states”.

But he said it is critical that Indigenous knowledges on climate change are not just about cultural burning, but holistic land management purposes and he’s called for urgent reform of non-Indigenous land and emergency management institutions, some of which, he says,“have historically been quite racist”.

The National Aboriginal Community Controlled Health Organisation (NACCHO) last year collected anecdotal evidence that there was a lack of support provided to Aboriginal and Torres Strait Islander peoples during and after the bushfires emergency, “including experiences of racism and discrimination when evacuating and accessing emergency support and supplies (including at evacuation centres)”.

The 2020 Final Report of the NSW Bushfire Inquiry found that Aboriginal people felt unwelcome at some evacuation centres, and some support services were reluctant to provide immediate relief.

“These experiences compounded the trauma they had already experienced as a result of the bush fires, and in some cases led to people putting themselves at risk as they feared how they would be treated in evacuation centres,” the inquiry found.

If you value our coverage of climate and health, please consider supporting our Patreon fundraising campaign, which helped fund this article.

This fundraising is so we can provide regular, in-depth coverage of the health impacts of the climate crisis, taking a local, national and global approach. All funds raised go to a dedicated fund to pay writers and editors to put a sustained focus on the health impacts of climate change. Please help us to produce stories that will inform the health sector, policy makers, communities, families and others about how best to respond to this public health crisis.