Defeating the Ministers of Death: eyeing the lessons of past vaccines for a COVID-19 world 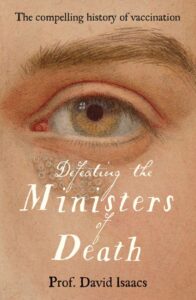 Introduction by Croakey: It would be a gripping read at any time, but perhaps never more so than now for the latest book from Australian infectious diseases specialist Professor David Isaacs, titled Defeating the Ministers of Death: The compelling story of vaccination, one of medicine’s greatest triumphs.

“We may fear terrorist attacks, but in truth humans have always had far more to fear from infections,” its cover blurb says, cataloguing the terrible toll through the last century alone, including from the 1919 Spanish flu (50 million deaths), smallpox (10 million) and more recently measles, which before the wide use of its vaccine, killed an estimated 2.6 million children every year.

But, as the book lays out, the history of vaccination that has saved us from these Ministers of Death is not one of angels of mercy alone, but is also “rich with trial, error, sabotage and success”.

And, writes Isaacs below for our #CroakeyREAD series, it provides us with many lessons for the enormous challenge that COVID-19 is now posing.

“Why don’t you write a book about immunisation?” Mary Rennie, a publisher from HarperCollins, asked me.

“I already did, 15 years ago, with a wonderful immunologist called Gordon Ada,” I replied.

“Did anyone read it?”

“Well no, it was a bit too scientific.”

Mary suggested I write a book about the exciting human stories that led to the development of vaccines.

I went away and thought about it. Oncologist Siddhartha Mukherjee’s Pulitzer Prize-winning book about cancer, The Emperor of All Maladies, was subtitled A Biography of Cancer.

Maybe I could write a biography of vaccines and vaccination. There would be great stories, and shameful ones. I knew about the key role the great Australian virologist Frank Fenner played in the exciting eradication of smallpox (smallpox was described by historian Lord Macaulay as the most terrible of all the Ministers of Death).

I also knew of the fraudulent research of Andrew Wakefield, which led to the MMR vaccine–autism controversy and cost the lives of children dying unnecessarily from measles.

However, I did not want to write a book that was overwhelmingly a manifesto in favour of immunisation.

One of my areas of study and research is clinical ethics, and I was keen to explore the ethical issues around immunisation.

I would tell true stories to illustrate the tragic consequences of not immunising: a child left brain damaged by vaccine-preventable meningitis contracted because his parents declined to get him immunised; a baby who died from whooping cough transmitted by their immunised sibling, who caught it from an unimmunised classmate.

I wanted to discuss how rights could conflict: the important right to decide about your own child’s health, including whether or not they received routine vaccines, could conflict with another parent’s right to protect their child against vaccine-preventable diseases.

In Australia we are in the lucky position that because of our high rates of routine childhood immunisation – over 95 per cent – the risk of a non-immunised child catching a vaccine-preventable disease is very low and the risk of them transmitting it to an immunised child even lower.

In that context, I argue that we do not have to coerce parents to immunise their children but can respect their wish to make what they consider the best choice.

However, there are rare situations where a child is at greatly increased risk: I describe a baby born to a mother with chronic hepatitis B infection, whose parents refused hepatitis B vaccine for their newborn.

Here, the risk the baby would catch hepatitis B, with an attendant risk of liver cancer later in life, was high enough that we went to court and obtained an injunction mandating hepatitis B vaccine for the baby.

In starting to write this book, I found to my embarrassment that I knew far less about the history of the development of vaccines than I thought I did. But it was a delight to come to know some of the great characters of vaccine development.

I learned that Edward Jenner, who developed smallpox vaccine, tried the vaccine out first on his gardener’s young son. Jenner, a general practitioner in rural Gloucestershire, was able to publicise his vaccine through the prestigious Royal Society.

Jenner was a Fellow, but his FRS (Fellow of the Royal Society) was not for medicine; rather it was for describing how baby cuckoos had a groove in their necks which they used to evict the eggs of other birds from their nests.

I learned that the great Louis Pasteur, who famously developed rabies vaccine, was not a doctor but a chemist; that he had a stroke when young and was nursed through it by his devoted wife; that he sometimes stole his colleagues’ research findings with no attribution, and that he exaggerated the number of dogs on which he had tested his rabies vaccine.

It was strangely reassuring to find out that even great scientists were not perfect.

I learned of Sister Elizabeth Kenny, the formidable self-taught Queensland nurse, who developed her own technique for rehabilitating polio victims, using a forerunner of modern physiotherapy.

Sister Kenny terrorised doctors who thought they knew more than her in Brisbane and in the United States, Hollywood made a film about her starring the glamorous Rosalind Russell.

There are disasters to tell, too. Polio caused dread in the mid-20th century, a silent menace spreading like wildfire, with poignant parallels to COVID-19 today.

A child could be well one day, ill the next, and paralysed within hours. The worst affected had paralysed respiratory muscles, which could kill them or leave them in an iron lung, sometimes for the rest of their lives.

Indeed there are some people still in iron lungs after 60 years. Others were permanently crippled.

In the 1950s, US refugees Albert Sabin and Jonas Salk competed to develop a polio vaccine. Salk’s killed (or inactivated) vaccine underwent a successful randomised controlled trial. As the trial results were announced in a fanfare of publicity to expectant US citizens, five drug companies were lined up to produce the vaccine and, with undue haste, were given licences.

One of them, Cutter Laboratories, was a small family concern which failed to kill the virus for the vaccine. Within two weeks, children given Cutter polio vaccine started to develop polio. The Cutter vaccine was withdrawn and jeopardised the whole vaccination movement, but because polio was so feared, immunisation continued and the number of cases of paralytic polio fell from hundreds of thousands a year (350,000 in 1988) to just 35 in 2018.

The Cutter Incident, as it is called, taught us a lesson about not cutting corners in vaccine production – lessons we will need to heed when developing vaccines against SARS-CoV-2 virus, the cause of COVID-19, that are safe and effective.

Nature is the World’s greatest terrorist. Pandemics have plagued humans throughout history and will continue to be part of the human condition, no matter how prepared we are.

However, we have often been able to overcome them by preventing spread and by developing vaccines. We need to learn from history.

Professor David Isaacs is a consultant paediatrician at the Children’s Hospital at Westmead, Sydney, and Clinical Professor in Paediatric Infectious Diseases at the University of Sydney. He has been a member of every Australian national immunisation advisory committee for the last 25 years. He is also a leading advocate for the health and wellbeing of asylum seekers and refugees, and recently wrote for Croakey about the risks and plight of many who are being held in crowded detention facilities.

Defeating the Ministers of Death: The compelling history of vaccination, one of medicine’s greatest triumphs is published by HarperCollins

You can bookmark #CroakeyREAD articles and events here: