From the Every Australian Counts campaign against the new assessments

**This post was updated, below the article, on 17 and 19 March with a response from the National Disability Insurance Agency and reply from author Professor Helen Dickinson**

Disability advocates are calling on the Federal Government to immediately halt plans for independent assessments to the National Disability Insurance Scheme (NDIS), saying the changes will fundamentally alter the individualised and personalised nature of the NDIS.

“While we all want greater consistency, we are very concerned this increasingly automated process will not adequately consider individual need and circumstance,” said a joint statement from multiple disability groups.

Helen Dickinson, Professor of Public Service Research at the University of New South Wales, outlines their concerns in the article below, originally published at The Conversation, writing:

“The government says this new approach is aimed at making the NDIS fairer. But many people with disability think it is about cost-cutting. They also say an independent assessment is a “nightmare” process that doesn’t produce an accurate picture of people’s lives.”

Significant concerns about the levels of violence faced by people with disability have also been highlighted this week, as #March4Justice rallies took place across Australia, with the publication by the Disability Royal Commission of a new report which revealed that, in the last year, women with disability were more than twice as likely to report sexual violence as women without disability.

A coalition of more than 20 disability organisations have released a statement setting out significant concerns over the federal government’s plans to introduce independent assessments to the National Disability Insurance Scheme (NDIS). 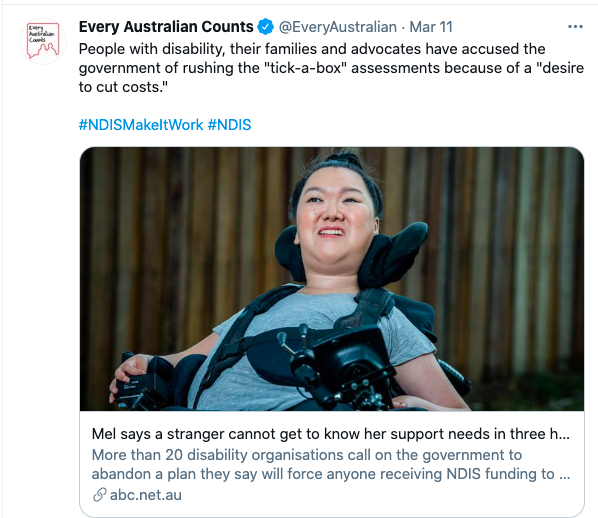 The government says this new approach is aimed at making the NDIS fairer. But many people with disability think it is about cost-cutting. They also say an independent assessment is a “nightmare” process that doesn’t produce an accurate picture of people’s lives.

If the government is trying to make the NDIS fairer, there are better ways.

Read more: Understanding the NDIS: how does the scheme work and am I eligible for funding?

What are independent assessments?

To meet criteria for NDIS funding, you need to demonstrate you have a permanent and significant disability.

At the moment, applicants submit evidence from experts such as medical professionals and specialists. But this can be expensive, and the government argues this has led to inconsistencies in how individuals are funded.

For instance, NDIS minister Stuart Robert recently shared Tasmanian data showing a 53% difference in the average value of NDIS plans between more and less wealthy towns. So he argues independent assessments would make the process “simpler, fairer and more consistent for participants, and their families and carers”.

Those currently in the scheme will progressively be required to undergo the same assessment before they receive their next plan, with new legislation to facilitate this process.

Read more: Change Agents: Rhonda Galbally and Bruce Bonyhady on the birth of the NDIS

One of several organisations privately contracted to the National Disability Insurance Agency (NDIA) will conduct these independent assessments. They will send an allied health professional, who is unknown to the person with disability, to assess the level of support they need.

The assessment will be done using standardised tools (such as a questionnaire the health worker completes). The outcome determines whether the person is eligible for NDIS funding and how much they should receive.

The assessment process takes a maximum of three hours. In that time, the assessor needs to get to know an individual, understand how their disability impacts them, and gauge the types of support they have around them.

This isn’t long enough to get to know the complex details of an individual’s life. And people with disabilities that fluctuate (such as multiple sclerosis or mental illness, for example) may happen to be assessed on one of their better or worse days, skewing the picture.

The suite of assessment tools is focused on clinical issues, with different ones used for different age groups. For instance, they can measure medical conditions, mobility, or what people need assistance with. But they were not designed to decide appropriate funding. This is an untested application and no other disability system in the world uses this approach.

There are concerns this process will measure people simply on their medical diagnoses.

There are also concerns the process is not culturally safe for minority groups, such as those with a culturally or linguistically diverse background, LGBTIQA people with disability, and First Nations applicants. Disability advocates say these groups require assessors with specialised expertise. 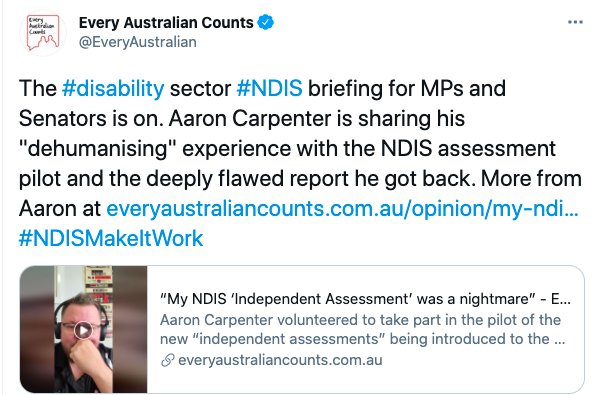 Pilots so far show assessments are being undertaken by inexperienced health professionals who do not have much knowledge or experience of disability. Questions are asked without context, so the process doesn’t always give good insight into people’s lives and priorities.

Some of those who have been through the process describe it as “dehumanising”. They say the short assessments can’t capture all the context around an individual’s life, and the focus on deficit and what individuals can’t do can be traumatic.

The independent assessment decision cannot be appealed, and people with disability won’t get a copy of the full assessment unless they apply to see it. If the process determines you are not eligible for the NDIS or that your plan should be substantially less than it currently is, there is no avenue to challenge this.

There have been concerns that NDIS costs might blow out and it is certainly true the original modelling behind the scheme underestimated demand.

However, many in the disability community are concerned this “tick-a-box” exercise is ultimately about cost-cutting through smaller plans and tighter eligibility criteria.

Read more: Explainer: how much does the NDIS cost and where does this money come from?

Lack of consultation and transparency

The NDIA says functional assessments were always central to implementing the NDIS.

The Productivity Commission originally recommended them in 2011. And in 2019, the independent Tune review suggested independent functional assessments could help solve some issues it identified with the NDIS.

Read more: The NDIS is changing. Here’s what you need to know – and what problems remain

However, disability advocates say independent assessments, as currently proposed, are significantly different to those outlined in the Tune review. They say: 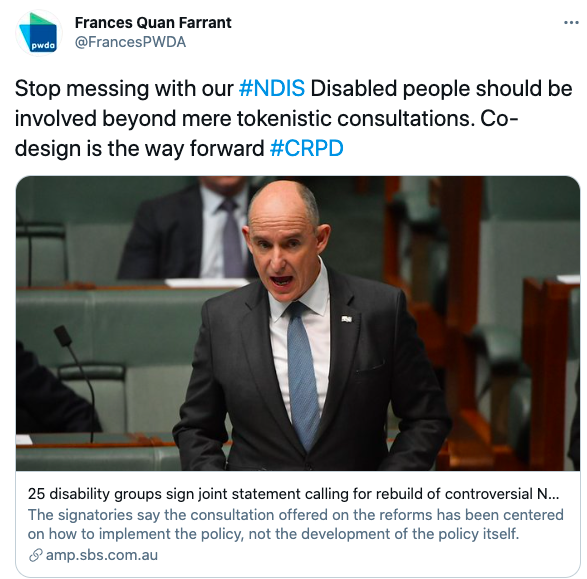 Many in the disability community have also asked why the NDIA has not shared the results of any modelling or testing of the tools and the outcomes of the pilots.

What could we do instead?

Disability advocacy organisations are calling for an immediate halt to the planned rollout of compulsory assessments.

They are not against the idea of assessment processes that make the scheme fairer but believe this is the wrong solution.

Undertaking an independent evaluation of the proposed changes and one that is carefully designed in consultation with people with disability and their families would be a good start.

Response from the NDIA

The National Disability Insurance Agency issued this response to the article:

“We have seen your recently published story regarding NDIA independent assessments, and have noticed a number of inaccuracies in the article, particularly –

1. The assessment process takes a maximum of three hours.

This is incorrect, the duration of an independent assessment does not have a time limit – they will take as long as they need to. The assessment process focuses on understanding each person’s individual circumstances and their ability to manage tasks and activities of everyday life. Independent assessments can take place over a number of days to ensure the assessor gets an accurate picture of the person’s functional capacity.

2. The suite of assessment tools is focused on clinical issues, and there are concerns this process will measure people simply on their medical diagnoses.

This is incorrect, the assessment tools are not focused on clinical issues, and access to the NDIS has always been based on a person’s functional capacity, rather than medical diagnosis. The tools are focused on functionality and are disability-neutral, so can be used across all disability types.

3. Pilots so far show assessments are being undertaken by inexperienced health professionals who do not have much knowledge or experience of disability.

Qualified allied health professionals, who are university degree qualified, registered with the Allied Health Professionals Australia in their relevant professional body, and trained to administer all tools will deliver independent assessments. Clinicians will be matched to each participant, to ensure they have the right skills for the individual’s disability based on their experience and training.

4. Lack of consultation and transparency.

It is not accurate to say there has been a lack of consultation. Recently there has been additional consultation to support the roll out of independent assessments. Over the last three months the NDIA has collected feedback from participants, family members, carers, providers and other stakeholders. The feedback received throughout this consultation process will inform how the reforms are delivered and the support, resources and information provided to participants, planners and Local Area Coordinators.

The introduction of independent assessments has been part of ongoing discussion regarding improvements to the NDIS experience, including consultation with more than 40 peak health and disability bodies from across the sector, ongoing completing of two pilot programs to trial independent assessments and gather feedback from participants and their families on the experience and release of consultation papers, with submissions closing next month.

5. Many in the disability community are concerned this “tick-a-box” exercise is ultimately about cost-cutting through smaller plans and tighter eligibility criteria.

It is incorrect to suggest there will be ‘tighter eligibility criteria’. The eligibility criteria for the NDIS will not change. Independent assessments are not about cost-cutting or reducing the number of NDIS participants. Growth of the NDIS is expected to continue as set in the Budget forward estimates. More than 432,000 people are currently receiving supports through the NDIS, which is on track to reach well over 500,000 in the next few years.

These inaccuracies, and other misconceptions in the article, are addressed in more detail in a statement from the NDIA released last week, which can be found on the NDIS website – Media Statement | NDIS