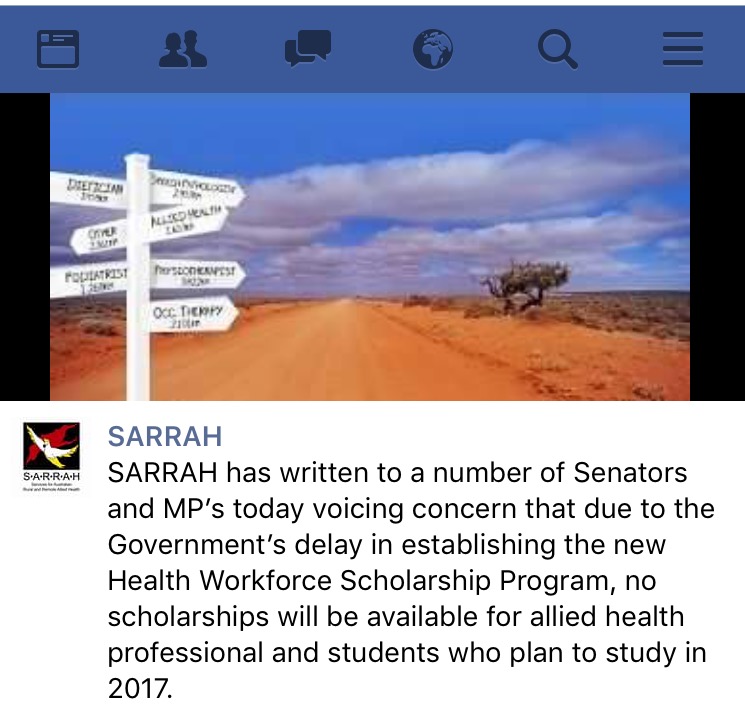 Australia’s peak body for advocacy, support and professional development for rural and remote allied health professionals, SARRAH (Services for Australian Rural and Remote Allied Health) has today written to a number of Australian MPs to express concern about the impact of the Federal Government’s delays in setting up its new Health Workforce Scholarship Program.

SARRAH administers five types of scholarships under the Nursing and Allied Health Scholarship and Support Scheme, funding education for students, as well as for existing practitioners’ Continuing Professional Development (CPD).

In the 2016-17 Federal Budget, the Government committed to deliver health workforce scholarships through a single agency, for the 2017 academic year, grouped as the Health Workforce Scholarship Program.

The program was to commence on July 1 2016 but SARRAH CEO, Rod Wellington, told Croakey that, despite reassurances from Minister Ley’s office in April that the commitments were “under active consideration”, there has been a “deafening silence” ever since.

SARRAH’s letter to the MPs expressed concern that, that because the Government was yet to release a tender to administer the new Health Workforce Scholarship Program, there would not be scholarships available for people who plan to study in semester 1, 2017.

Mr Wellington told Croakey SARRAH had been contacted by more than 1400 potential applicants, both students and practitioners working in rural and remote locations, who were waiting to commence the application process. He anticipated that many would not be able to take up their training places or access CPD activities without financial support.

“By this time of year we are generally well down the path of assessing applications, as both students and existing rural allied health professionals need to make arrangements for next year,” he said.

Mr Wellington said supporting rural and remote allied health professionals to access CPD activities was vital to ensure the integrity of multidisciplinary care in these areas, and that failing to provide for students from the bush who wish to study for allied health professions was like “shooting ourselves in the foot” as it has been shown in numerous studies that students who originate from rural areas are likely to return to become part of the health workforce.

He suggested that interim measures might need to be employed, such as extending the existing scholarship programmes administered by SARRAH for six months (until mid-2017), so that scholarships could be awarded for next year.

Croakey has contacted Minister Ley’s office, who passed the inquiry to the office of the Assistant Minister for Rural Health, Dr David Gillespie. We will update you with the Minister’s response.

Read the full text of SARRAH’s letter to the MPs here.

Response from the office of Assistant Minister David Gillespie:

“The 2015-16 Budget Measure, Streamlining Health Workforce Scholarships ceased a number of existing scholarships and announced the creation of a new model of funding scholarships. Existing scholarships in the ceased programs will be honoured through to completion.
The Health Workforce Scholarship program is currently in its design stage. Consultation has taken place with external stakeholders and consideration is currently being given to a number of options for the delivery of this program.
The Department of Health is currently working through a number of options to determine the most efficient model to deliver the consolidated program.  Implementation has been delayed while the Department of Health works through the complex nature of administering return of service obligations.
The Government continues to support medical students through the Bonded Medical Places (BMP) Scheme.  The BMP Scheme provides a Commonwealth-supported place in an Australian medical school, in exchange for a commitment to work for a period of twelve months in an area recognised as having a shortage of doctors.
Support for health students is also available through the Rural Workforce Agency (RWA) network.  RWAs are located in each state and the Northern Territory, and provide support to rural and remote medical, nursing and allied health professionals.  RWAs also work with high school and tertiary students who are interested in pursuing a career in rural health.
Consistent with the 2015-16 Budget announcement, the Puggy Hunter Memorial Scholarship Program and the Indigenous Health Scholarship Scheme will continue to be available to support Aboriginal and Torres Strait Islander health workforce participation.”