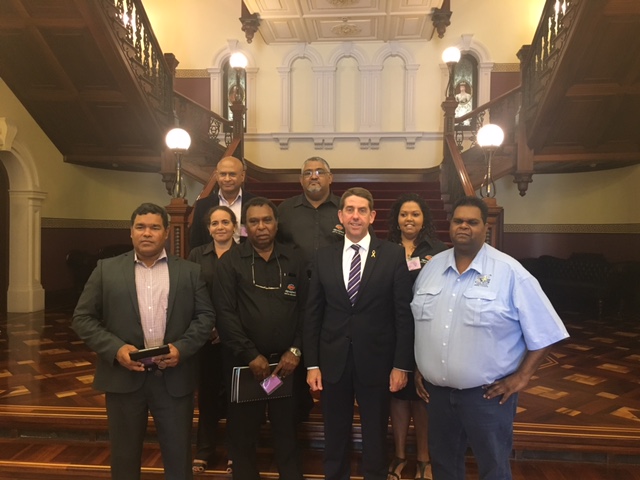 A delegation of Cape York mayors and health service representatives have described themselves as “desperate” as they head to Brisbane this week, to meet with State Government Ministers and other Members of Parliament.

The group is seeking to clarify who is responsible for funding primary health services in their communities, to request that these services be adequately and efficiently funded, and to shore up support for the Cape’s Aboriginal Community Controlled Health Organisation, Apunipima.

*See below for an update on the outcome of these meetings*

Cape York residents have some of the highest rates of chronic disease and mortality in Queensland, and the mayors plan to demonstrate that “statistics” such as reduced life expectancy reflect the devastating lived experience of their constituents.

“All too often you will hear politicians spout life expectancy figures when they announce funding measures or new initiatives and this is really frustrating for those of us whose life expectancy level means we have to ask ourselves are we living on borrowed time.”

“In my community of Wujal Wujal, we have a population of 291 but there is no one over the age of 65, so for us limited life expectancy is a reality.”

“My concern is that although access rates are increasing, primary health care funding levels are getting smaller and there is only so far the health dollar can stretch.  I don’t want my people missing out on core services because State and Commonwealth can’t decide who should fund what,” Cllr Walpo said.

The decision to form the delegation, which includes the mayors of Lockhart River (Wayne Butcher) and Wujal Wujal (Desmond Tayley), as well as Apunipima’s Chair Thomas Hudson, and CEO Cleveland Fagan, came after a question without notice in Parliament to Health Minister Cameron Dick, at the end of August, garnered a response that failed to address community concerns.

Member for Cook, Billy Gordon, asked the minister about the government’s level of commitment to transitioning government-led primary health care to Indigenous community-led primary healthcare delivery on Cape York Peninsula, and received a response about cooperation between State and Commonwealth-funded services.

The Queensland Government has previously committed to strengthening community delivered and led health services, through its Making Tracks Investment Strategy 2015-2018, but health and community leaders are becoming increasingly frustrated at the poor coordination and fragmentation of that sees a chronic and worsening under-funding of primary care.

The mayor of Lockhart River, Cllr Wayne Butcher said in a press release:

“Services that we have previously had access to like Speech Pathology have been withdrawn as a result of cuts in state funding to Apunipima.  The State is claiming to provide these services themselves, albeit 260 km away which for the kids in my community is no good.

“We have also seen private providers take advantage of this confusion by being commissioned by other government departments, not health, to work with our kids with no reference to the other healthcare providers in community, this is surely not safe practice and is putting our kids at risk.

“I would like clarity on who is responsible for funding primary health care in my community.  With the confusion, services are becoming increasingly fragmented and the inconsistency of care is a concern to me.  We already have three service providers in Lockhart River – Apunipima, Royal Flying Doctors Service and Queensland Health.  The addition of other private providers who we don’t know and who don’t work with the services that we do have will fragment it further.

“In Lockhart River we recognise that appropriately funded community driven and community led primary health care that is delivered in a culturally appropriate way can have a real impact on health outcomes and we would like the State Government to support us to achieve that.”

A spokesperson for Apunipima told Croakey that State Government support for effective and efficient allocation of funds is, indeed, what the delegation is seeking.

“Between the Commonwealth and the States, there are enough funds,” she said.

“We know that community driven and community led primary health care can deliver the best outcomes for our people. Last year Apunipima had a $600 000 funding cut and we still managed to increase our service provision, providing services to 81% of the Cape York Peninsula population, and increasing our regular clientele by 3000 people.

What we need is the State Government’s support and advocacy for the provision of Commonwealth funding. Imagine what we could achieve if the Commonwealth directed their health funding to where it belongs – in the community’s control.”

For further information, listen to this interview with some of the members of the group which aired on Radio National’s Breakfast Program this morning.

The delegation’s meetings are ongoing. Stand by for updates…

The following joint media statement was released on  21 September by:

An action plan for transition will be completed by all key stakeholders by early November 2016, providing the green light for the staged roll out of transition to be implemented by 1st July 2017.

‘We need appropriately funded, community led and driven health care services and solutions for Cape York. That’s what will make the difference to our people’s lives,’ Clr Tayley said.

Chairman Thomas Hudson states: ‘Our children and their families’ life expectancy is 23 years’ lower in the Cape then the rest of Queensland. Our communities need to take control of their own health outcomes –  transitioning to community led, community driven, community staffed health service will make a critical difference in helping close the gap.’

The plan would mean an end to fragmented services and service gaps, as he believes the Health Minister knows there is a crisis facing Cape York people’s health. To have a one stop shop, that is community led and community driven, will be a game changer.’

‘Community leaders have been calling for equitable health funding, equitable access to health services and culturally appropriate comprehensive primary health care. Minister Dick has indicated that he is serious about listening to community and community leaders when it comes to this critically important issue,’ Mr Gordon said.

‘I look forward to working in partnership with the Government, Mayors and Aboriginal and Torres Strait Islander Community Controlled Health Organisation sector to deliver community led, community driven health services to the Aboriginal and Torres Strait Islander people of Cape York. With the intention of reducing the number of funerals and deaths that our people of Cape York face all too often.’