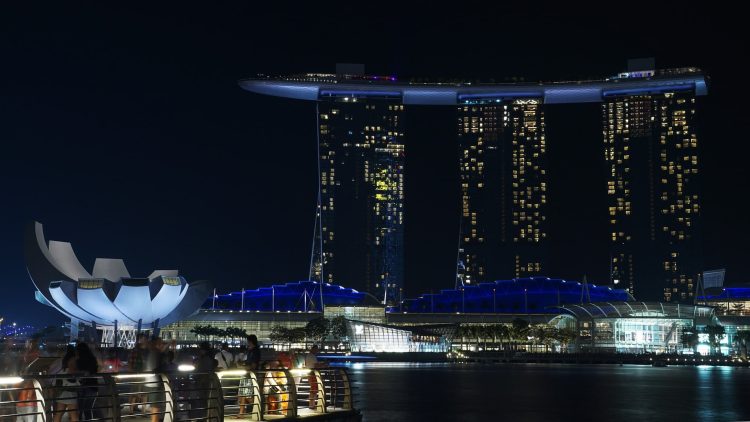 Image by Monika Neumann from Pixabay

Did the Singapore strategy work after all?

At first, when COVID-19 started dominating conversation, Singapore was seen internationally as a paragon of good pandemic policy. It was sufficiently aggressive in testing and quarantine that its parallel policy of only minor changes to daily life was thought to be reasonable, even laudable.

Although it was late in closing its borders, so were most other countries. Undetected early cases from China caused localised clusters. The new response kicked in quickly, but perhaps not quickly enough: cumulative cases jumped from 266 to 558 in a week in late March. Eighty per cent were imported, not from China, but from many other nations. When the borders were closed, the imported cases slowed and then stopped.

But the broad strategy remained markedly different from Australia’s. Large-scale gatherings were banned but shops, schools, museums, courts and the parliament remained open. Instead of severe lockdowns, the testing and tracing regime was ramped up, using a large staff who had already been trained.

Until late March, the strategy paid off. The economy was subdued but not dead. Because daily life remained relatively normal, the capability to keep the arrangements in place for longer was greater than in nations with stricter regimes. But the daily number of community-acquired cases rose from an average of 53 in the last week of March to 79 in the first week of April. 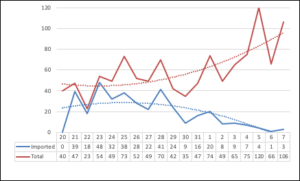 In response, from 7 April the Singapore government introduced restrictions similar to those already operating in Australia. They will remain in place until at least June 1.

But did those new community cases come from across the population or from particular groups? This is important: if the increase came from a particular group, it may be that the former light restrictions, coupled with testing, had worked after all. This has implications for other countries, including Australia, contemplating a relaxation of restrictions.

It is now reasonably clear that testing of migrant workers living in crowded hostels was too little and too late. These cases have been separately reported only from 1 April, and even then testing took many days to ramp up to a level that could reveal the true extent of infection in this group. The disparity in the impact of the pandemic on the residents of Singapore’s migrant worker hostels, compared with the rest of the population, is glaring. As at 23 April, the cumulative number of dormitory cases accounted for 9,076, or 81.2%, of Singapore’s 11,178 overall cases. That proportion is likely to rise further. Prevalence among dormitory residents was 2.81% against 0.07% for work-permit holders not living in dormitories and 0.02% for the rest of the population. 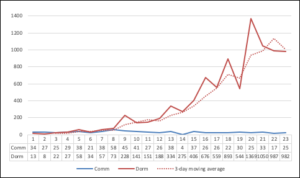 It is interesting to compare the situation in Singapore, which had some of the world’s lightest restrictions, with that in New Zealand, which has some of the toughest. New Zealand had 1,141 cases by 23 April. But when the dormitory cases are excluded, cases in Singapore’s broad community – 1,101 – are slightly lower than in New Zealand, even though Singapore has a population 15% higher and an epidemic that began much sooner. New Zealand has had 16 deaths against Singapore’s 12 (one of whom was a 46-year-old migrant worker from India who had been living in a hostel).

The situation of migrant workers in Singapore is being condemned world-wide. There are 323,000 people, mostly from south Asia, living in 43 dormitories and working in jobs Singaporeans do not want, such as construction labouring, manufacturing and menial domestic work.

Their average monthly wages are around $450 compared with Singapore’s average of about $3,500. Even then, many are not paid their promised wages and amass substantial unexpected debts from extortionate “agency fees”. They may not bring family members with them, they need approval from the Ministry of Manpower before marriage to a Singapore citizen or permanent resident, and they are not allowed to become pregnant or give birth in Singapore. A 2019 survey by the International Labour Organisation found 60% of Singaporeans thought migrant workers should not receive the same pay benefits as local workers and 32% felt migrant workers had a poor work ethic and could not be trusted

Living conditions in the dormitories range from inadequate to squalid. They are seriously overcrowded, with between three and 17 people in a single room.  In most cases, social distancing is impossible. There have been reports of overflowing lavatories and cockroach infestations.

“The way Singapore treats its foreign workers is not first world but third world,” says Tommy Koh, a veteran diplomat and Singapore’s ambassador-at-large. “They stay in overcrowded dormitories and are packed likes sardines with 12 persons to a room. The dormitories are not clean or sanitary. The dormitories were like a time bomb waiting to explode. They have now exploded with many infected workers. Singapore should treat this as a wake-up call to treat our indispensable foreign workers like a first world country should and not in the disgraceful way in which they are treated now.”

The surge in cases in Singapore was not caused by its relaxed initial restriction policy, but by the neglect of immigrant workers living in crowded hostels. There is no evidence that the initial policy led to an outbreak of community transmission within the broad population. This may give some comfort to authorities in other countries, including Australia, currently contemplating easing their current unsustainably severe restrictions.

The most important provisional conclusion is that severe lockdown measures such as Australia’s may not be necessary to protect the large majority of the population. The danger of a major easing of restrictions is likely to come not from the broad community, but from places of particular vulnerability, such as Singapore’s migrant worker hostels. In both Singapore before the 7 April measures, and in Sweden still, the public implemented significant social distancing without being required by law to do so.

Tourism in Singapore is dead, restaurants report a drop in revenue of 80%, and among clothing retailers, hair salons and electronics retailers the fall is around 50%. But the broad economy, though much reduced – it contracted by 2.1% in the March quarter – continues to function.

Many employees lost hours and income but kept their jobs. In the light of this, the need for enforced lockdowns as a means of protecting the majority of the community is reduced. Also, it cannot be assumed that the economy would substantially rebound even if controls were lifted unless people felt reasonably safe to venture into shops, restaurants and workplaces.

The Singapore experience, as well as that in north-west Tasmania, emphasises the fundamental need to place front of mind those places particularly vulnerable to infectious disease outbreaks. These include hospitals, immigrant detention centres, Indigenous communities and prisons, as well as districts with either a high prevalence of cases or a known vulnerability. Adequate sentinel testing is essential to identify clusters in their early stages. If this had been done in the Singapore dormitories and in Tasmania’s North-West Regional Hospital, those major outbreaks, and their attendant costs, could have been avoided. In such settings, strict enforcement of infection control, personal distancing and ready availability of effective protective equipment are essential.

But a single national or statewide approach is not appropriate, will unnecessarily impact on people’s well-being and will make any measures much harder to sustain. The Singapore experience shows the current levels of restriction are unnecessarily severe for most of the country and, without sentinel testing, are unlikely to avoid outbreaks in susceptible situations.