Did we make mistakes in our study? Yes. But our argument stands, says researcher who queries the merit of cycle helmet laws

In a recent post, medical epidemiologist Tim Churches outlined errors in a study which had concluded that factors other than mandatory helmet legislation had been responsible for a reduction in head injuries among cyclists.

One of the study’s authors, Associate Professor Chris Rissel, of the School of Public Health at the University of Sydney, responds to the critique below.

Rissel acknowledges some errors in the study, but argues that the overall evidence casts doubt on the benefits of mandatory helmet wearing. General improvements in the road safety environment – rather than helmet laws – were probably responsible for a reduction in cyclist injuries and death through the 1980s and early 1990s, he says.

As noted by Mr Churches, the article titled ‘The effects of bicycle helmet legislation on cycling related injury: the ratio of head to arm injuries over time’ had arithmetic and data plotting errors.

We do apologise for these unintentional errors and any confusion that this may generate. The arithmetic errors were due to transcription errors from repeated computer runs to generate the data, and the data plotting errors resulted from re-scaling of the graph prior to publication without adequate checking of the positioning of the added figures.

The corrected data are due to be re-submitted for publication to the Journal of the Australasian College of Road Safety and, following normal peer review practice, the new manuscript is being edited following reviewer feedback.

It is unfortunate that in NSW we only have injury data from a few years prior to 1991, making it difficult to better show trends during this critical time. However, we do have data from this earlier time from two other states, Western Australia[1] and Victoria [2] and it is instructive to examine the graphs of these data because they indicate that our original conclusion is quite reasonable (see Figure 1 and 2), that factors other than helmet legislation contributed to the decline in cyclist head injuries.

Each of these reports explicitly state that general “improvements in road safety” contributed to the reduction in head injuries among cyclists. The Victorian data are particularly interesting because at the end of the decade-long decline in head injuries in the 1980s, the final few years of decline are attributed by the Monash University Accident Research Centre to the introduction of helmet legislation.

Other data on cyclist fatalities also clearly show significant declines before helmet legislation was introduced, again supporting the idea that it was general improvements to the road safety environment that made cycling safer, not mandatory helmet legislation.

The third figure shows a graph of the number of cyclist deaths in Australia [3], and a downward trend is obvious, including a steep decline in the 1980s. The fatality rate remains flat from the 1990s on (fourth figure). 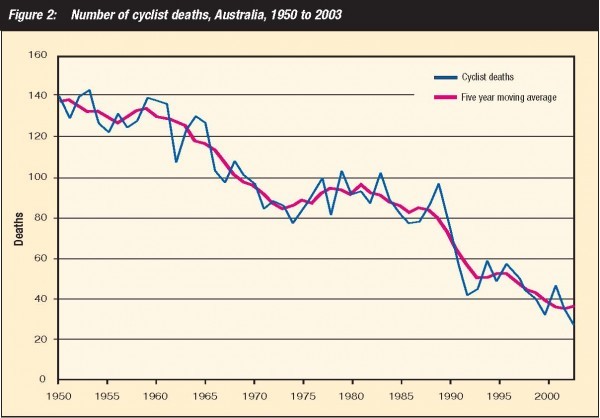 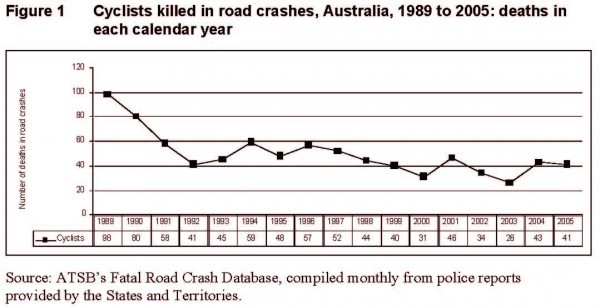 Clearly more research needs to be conducted on many aspects of bicycle helmet legislation. No one study is likely to answer all the possible research questions about mandatory helmet legislation, and we need to build up a realistic picture of what was happening and what changed when the legislation was introduced and what it means for cycling today.

Despite errors in our original paper, which was a fairly modest contribution, the most plausible interpretation of this part of Australian cycling history is still that it was general improvements in the road safety environment that reduced cyclist injuries and death through the 1980s and early 1990s rather than mandatory helmet legislation.