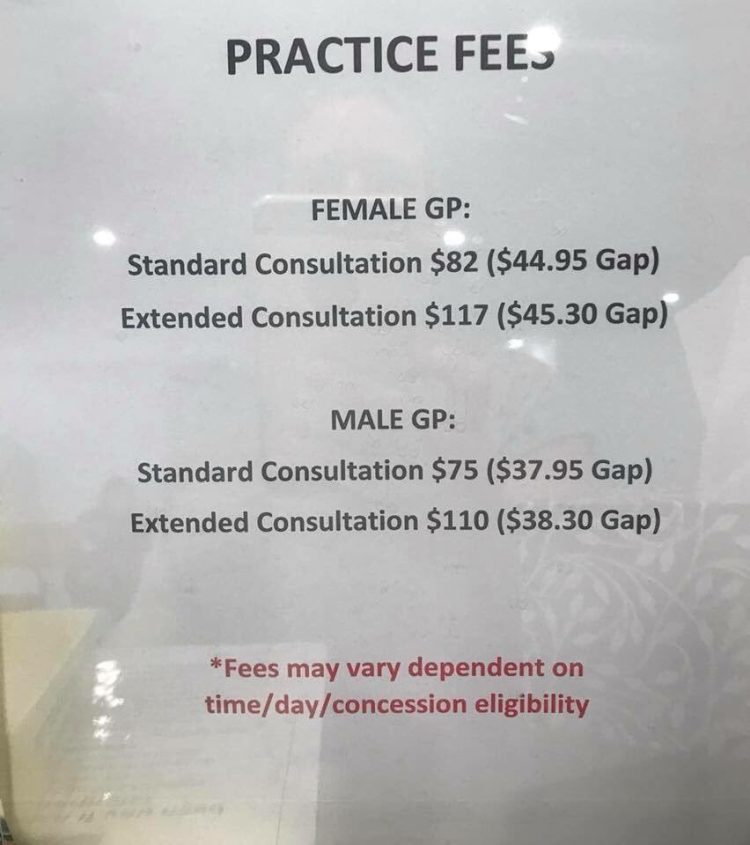 In the post below, Western Australian GP Dr Brett Montgomery says the news raises many equity issues, but he suggests that “the main villain of the piece is not the immediately obvious one”.

He calls for examination of underlying systems issues, including the flaws in our fee-for-service model of general practice and impact of private health care and insurance, concluding:

If we had a truly universal health care system, paid for via taxes and received free at the point of care, with equal remuneration for male and female health professionals, then many of our gender and socioeconomic disparities in health care access would disappear. I’d vote for that.

See at the bottom of the post for related tweets.

It started with a tweet. “This is so fucked”, said Maeve Marsden, having learned of a Melbourne GP clinic charging $7 more for appointments with female than male doctors. “Surely this is illegal?”

A lively Twitter thread ensued, with many sharing Marsden’s concern about discrimination. Some described the fee difference as a “gender tax“, or called for complaints to medical or human rights authorities. In contrast to these rights-based concerns were a handful of twitterers (many of whom were doctors) taking more individualistic, market-based views: that women could opt to take their concerns to the cheaper male doctors, or go elsewhere entirely.

The story was picked up by The Guardian and The Age. Neither paper managed to elicit a comment from the practice to confirm or explain their policy, so commentaries – including my own –  are built on various assumptions, including that the tweeted photo was genuine. But they did wrangle a comment from a spokesperson for the “deeply concerned” Federal Health Minister Greg Hunt: “Not only is this practice offensive, it is potentially discriminatory.” It was reported that the matter had been referred to the state’s Health Complaints Commissioner in the hope of investigation.

Both newspaper reports, on my reading, focused more on the discrimination angle of the story. This is certainly a worthy topic, but I was disappointed that the discussion didn’t delve deeper. There is more than one sort of discrimination at play here, and in my view, the main villain of the piece is not the immediately obvious one. 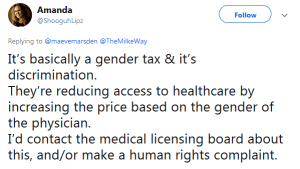 First, let’s be clear that this is not a simple case of charging women more than men for the same service. The reported policy of the clinic is not to charge women more than men, but to charge all patients (regardless of gender) more for consultations with female rather than male doctors.

But that doesn’t necessarily let the clinic off the ethical hook. It is well known that women tend to choose to see female doctors, especially for things like reproductive system or breast concerns. (I do as many Pap smears in a year as some of my female colleagues can do in a morning.) So the effect of the clinic’s policy may indeed be to collect more fees from women, on average, than from men. Even if this effect is unintentional, it is potentially a form of institutional discrimination.

What is the policy’s intention?

Assuming this discriminatory effect is unintentional, what is the policy’s intention? Again, as we haven’t heard from the clinic, I can only speculate. But I strongly suspect the intention is to remedy another form of gender discrimination – the fact that female doctors tend to earn less than male doctors.

Most GPs in Australia work as contractors rather than employees, earning a percentage of the fees they generate, rather than being paid a flat hourly rate. GPs who take more time with their patients, and who do more talking and thinking rather than procedures, tend to bill less, and so earn less.

Research from Australian general practice finds that female GPs earn about 6 per cent less per hour than male GPs, while actually fitting more into those consultations –  so from a health system point of view, female GPs seem more cost-effective. Cost-effectiveness is a noble goal, but it’s not right for there to be a pay disparity between doctors on the basis of gender –  especially when the lower paid gender is, on average, packing more value into their consultations.

But such are the perverse incentives in our fee-for-service Medicare system: treat 5 people in an hour superficially, and you’ll probably earn more than treating 3 or 4 people more thoroughly.

I suspect this practice’s contentious billing policy is aimed at correcting the gender disparity in their doctor’s incomes. But, as some twitterers observed, it doesn’t seem fair to correct a wage gap by relying on money largely collected from people who are themselves suffering from wage gaps.

Confusingly, then, I find myself empathising with both the authors and the critics of this practice’s policy.

The culprit at the heart of our health system

Who or what is to blame, then, for this awkward situation of duelling sexisms? To answer this, I think we should look beyond the clinic’s controversial policy, and examine the health system forces that have helped shape both of the varieties of discrimination at play here.

I think the culprit is our under-resourced, privatised, fee-for-service general practice system. This leaves doctors who provide careful, thorough care financially under-rewarded. And Medicare rebates, while a great mechanism for helping Australians afford medical care, seem insufficient to fully cover practice costs. The majority of consultations are still bulk billed (no gap), but many people who pay gaps will have noticed the size of these inflating over the years. And gaps affect access to care. Just as higher fees for female GPs feel like a “gender tax”, gap fees often function as an “illness tax”. I don’t think either of these taxes is fair.

And gender discrimination isn’t the only injustice in our health system. I regularly despair when I compare the ease of access to health care of my privately insured patients to that of my patients living on pensions or Newstart. Waits of months to years are common in public hospitals, but for the privately insured, care is often available in days to weeks.

So I reckon it’s a bit rich of Minister Hunt to express such offense over this clinic’s policy, while his government has presided over a long freeze to Medicare rebates (now thawing at “snail’s pace“), and overseen significant annual hikes in private health insurance fees. In the current financial year, instead of using taxes to significantly increase funding for general practice for everyone, the government has increased funding to private insurers, who profit as their customers jump health care queues.

So by all means, let’s have a robust debate about gender discrimination in health care funding. But let’s channel our concern not just at a single clinic’s policy, but at the larger forces which forged it. If we had a truly universal health care system, paid for via taxes and received free at the point of care, with equal remuneration for male and female health professionals, then many of our gender and socioeconomic disparities in health care access would disappear. I’d vote for that.

Disclosure statement: Brett Montgomery is a GP, who in his clinical work mostly (but not always) bulk bills. He also works academically at the University of Western Australia. He is a member of the Doctors Reform Society, an organisation that advocates for health for all, in a socially just and equitable way. He is a fellow of the Royal Australian College of General Practitioners. He is also a (fairly inactive) member of the Greens. He has not written this article on behalf of any organisation or political party. He tweets at @brettmontg. 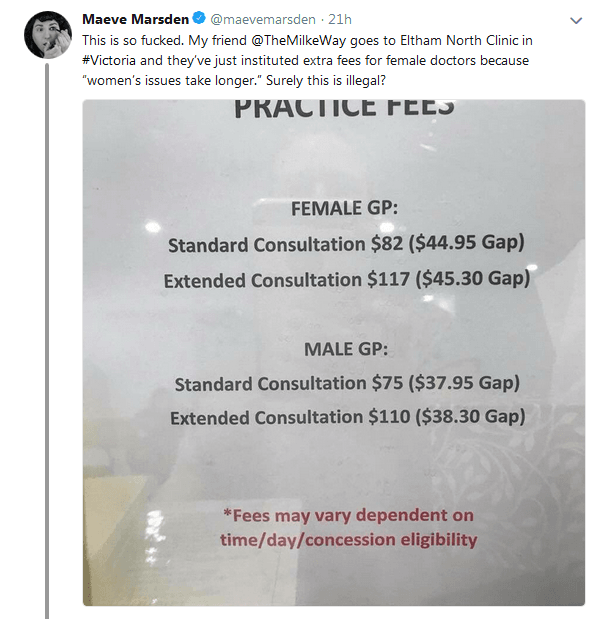 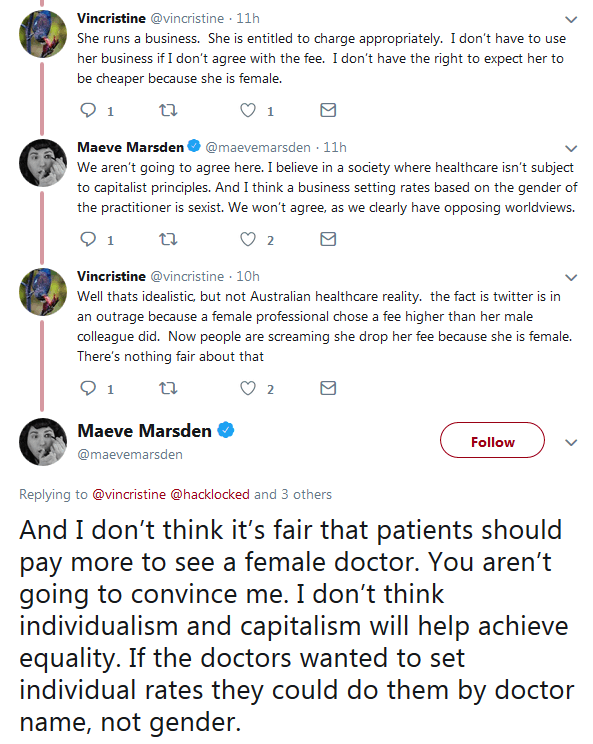 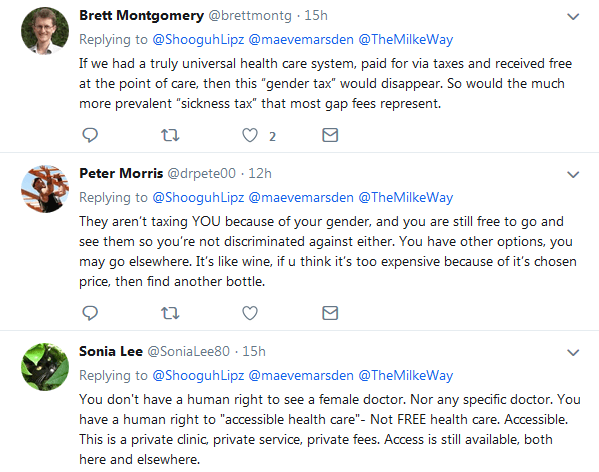