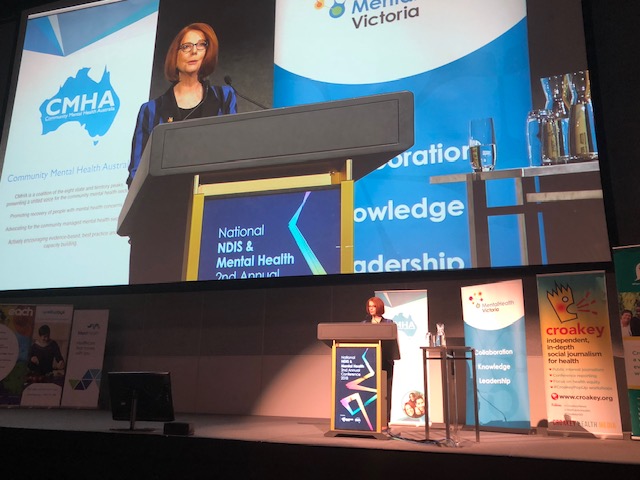 Taking no questions: Former Prime Minister Julia Gillard was not the only one

“If I can leave you with one message today, it is that we are listening – and we will continue to listen because it is absolutely vital we ensure the NDIS [National Disability Insurance Scheme] delivers strong outcomes for people with psychosocial disability.”

They were the closing words of the keynote speech from Assistant Minister for Social Services, Housing and Disability Services Sarah Henderson at the National NDIS and Mental Health conference in Melbourne earlier this month.

They came right before she said she wouldn’t be taking any questions as she took her leave from the two-day conference hosted by Mental Health Victoria and Community Mental Health Australia.

It’s never good when politicians won’t take questions from an audience that rarely gets a chance to speak directly with decision makers.

But it is particularly disappointing when there is clear evidence that the NDIS is failing some key groups – in her speech Henderson admitted it has “missed the mark” on psychosocial disability – and when this event provided an opportunity for the Minister to hear from those with on-the-ground insights, including consumers, clinicians and service providers.

Responding to the concerns being raised in this article, Henderson told Croakey on Monday:

“I am ordinarily very happy to take questions, as I did at another NDIS forum recently, but there was no Q and A session arranged because I was due to speak at another event on disability employment immediately following my address.”

It prompted MC Dr Norman Swan, host of Radio National’s The Health Report, to ask whether conferences should refuse to provide a platform to politicians if they aren’t prepared to be pressed about their policies.

He said that mental health had to be included in the NDIS because it is “the biggest cause of disability in Australia by far”, responsible for 28 per cent of disability.

But, he said, psychosocial disability support was developed in the NDIS as an “afterthought” and, according to eligibility criteria, would be available only to an estimated 10 per cent – 64,000 people – of those with significant mental health issues

“That is a massive equity problem, apart from the design issues,” he said.

Gillard addressed the issue, but only briefly, saying that she did not believe it had been a mistake to include psychosocial disability in the NDIS and that “great reform does take time to grow deep roots”. Otherwise she stuck to a script of extolling the work of beyondblue.

Like others who spoke to Croakey, Simon Tatz, former policy advisor for Mental Health Victoria, said Gillard could have brought a unique perspective to the conference.

“She really was the champion of the NDIS and is now the chair of a leading mental health NGO,” he said.

“I wanted to hear her personally say where she thinks it has gone (for people with mental health issues): has it gone as planned, if not why not, and what would she do to make it work the way she initially envisaged.”

The need for a unified voice?

Conferences usually aim to end on a positive, inspiring note, leaving delegates filled with resolve and a pathway for change.

This one raised many questions that could have been put more directly to politicians and policy makers, including:

And the big question

Where does the NDIS sit in the context of the whole mental health and broader health system in Australia?

Instead of providing inspiration and/or a pathway, the final panel session on ‘What have we learnt over the last two days and what do we do now to make those changes happen?” seemed to prompt a sense of frustration among some delegates and panellists.

As one delegate tweeted:

The final session has left me feeling a bit disillusioned.. How can we create a #mentalhealth system responsive to the needs of individuals experiencing mental illhealth to have a contributing life?.. what does it take? We need to move right now to ACTIONS! #NDISMentalHealth

For some, that frustration reflected wider issues, including the failure of a mental health system to meet the needs of consumers, carers and the workforce, and the exhaustion felt by many after decades of not having their needs addressed.

To others it underscored the continuing tension in the sector between those service providers and clinicians who remain resistant to questioning and consumers who have experienced harm and are, as one delegate said, “more invested in change”.

Others wondered about the call by MC Norman Swan for the sector to have a unified voice and clear agreed goals and targets.

Was it about promoting the voices or consumers and carers over biomedical voices, or vice versa? If you’re talking outcomes and targets, who is doing the asking and the framing? And how to you measure things like wellbeing, asked one delegate, a psychiatrist with two brothers who are diagnosed with schizophrenia.

Isn’t there, asked others, a need for diverse voices, as in any system?

The conference made clear there are many areas of common ground in mental health, particularly around the social determinants of health, including the impact of trauma and the importance of housing and employment. 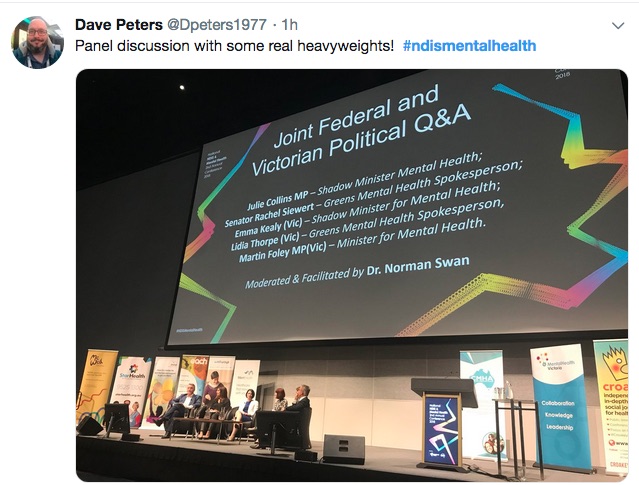 In a panel discussion on the first day of the conference, Victorian Minister for Housing, Ageing & Disability and Mental Health Martin Foley was in full election mode ahead of the November 24 state poll.

He spoke strongly about federal funding shortfalls but was less forthcoming about the role of State Governments — including his own — in contributing to NDIS pain.

The former Victorian Coalition government elected to fund its share of the NDIS by defunding community mental health services, and the current Labor Government has not fully addressed the gaps, which has meant a much more painful transition for Victorians.

Foley told the conference the promise of the NDIS had been to “fund the consumer, give the power to the consumer and the system will change”. But he said that model had been “slowly throttled…by deliberate underfunding” by the Commonwealth.

Many agree, but presentations and discussions at the conference made it clear that a bigger question on the NDIS is to what extent it can, and must, be the trigger for broader reform, in mental health, health and social policy.

For example, Dr Sebastian Rosenberg, from the Centre for Mental Health Research at the ANU, called for more discussion about the NDIS decision to persist with a fee-for-service model.

He said: “…we know in medicine that fee for service does not yield the best outcomes and does not yield multidisciplinary care. Why on earth would the NDIS choose this method of funding at the same time the health system is desperately trying to find alternatives? And team-based approaches are exactly the type of care needed for most NDIS clients with psychosocial needs”.

Kerry Hawkins, president and a carer representative, on the Western Australian Association for Mental Health (WAAMH) and a National Mental Health Commissioner, said the NDIS “has landed in a messy space”.

She said it needs a strong strategic framework that really draws out who is doing what and why, and how it works with the PHNs and the states and territories “so that we can start to say this is where the gaps are”,

“I would have thought the NDIS was leading some of that work…but at the moment, a lot of the players like the NDIA and PHNs are saying ‘we’re a small part of the picture, so don’t expect us to solve all of the problems”.

“There’s no real leadership yet, no one has done that master architecture piece of work.”

Hawkins said consumer and carer participation is also a very live question for the NDIA and NDIS, and not only for mental health services, to address “the many structural design flaws because of the late inclusion of psychosocial disability”.

“It is still very much a bureaucracy that is consulting with people, running workshops, but not empowering consumers, carers and family,” she said.

“How they engage with the sector, how they drive reform, and how they authorise people with lived experience to have their voices heard is not yet clear,” she said.

Hawkins said her take to date on the NDIS is that it is “a symptom of a very broken and damaging system.” 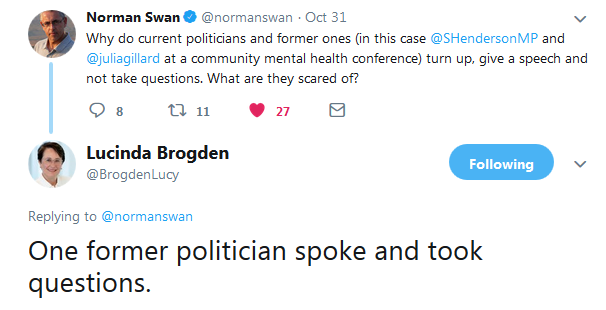 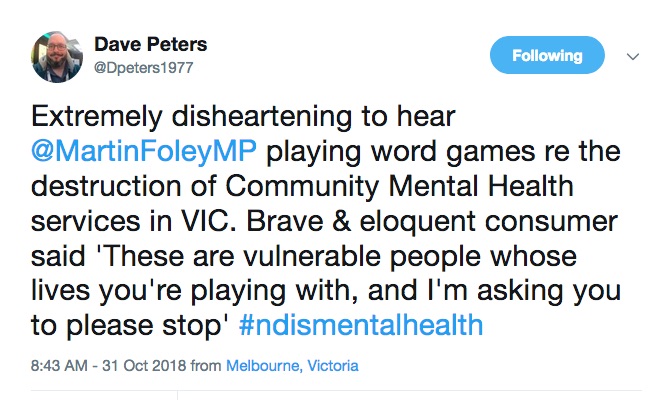 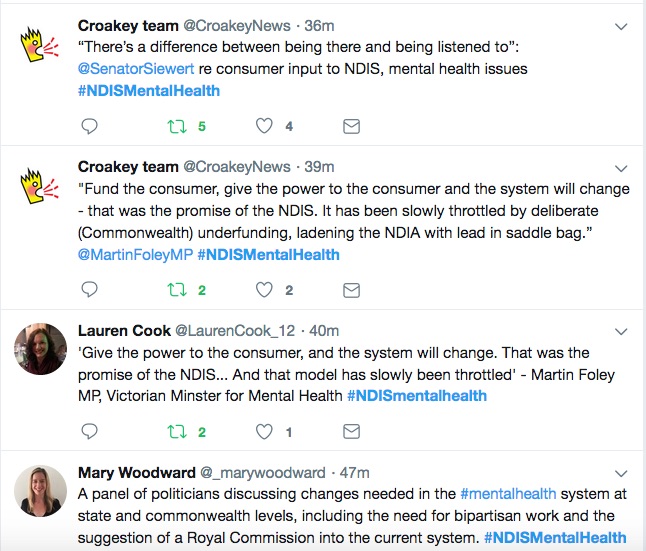 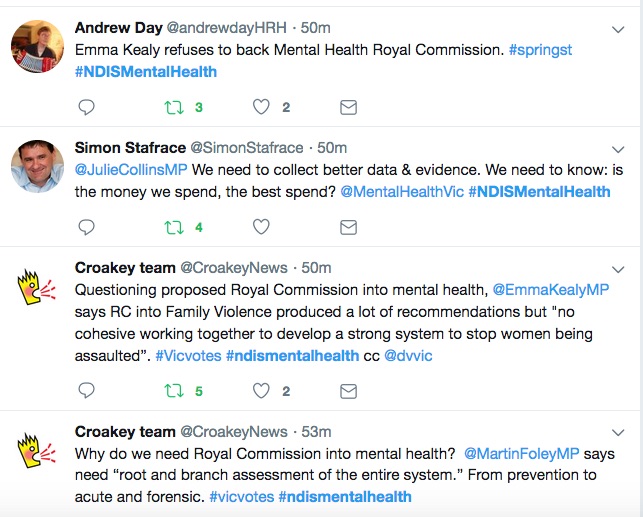 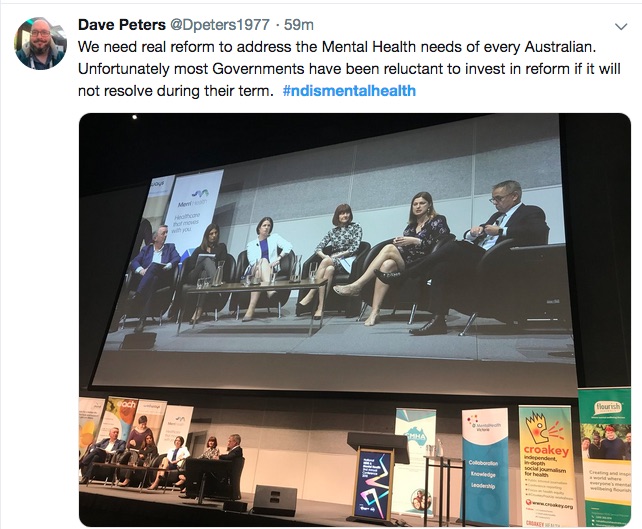 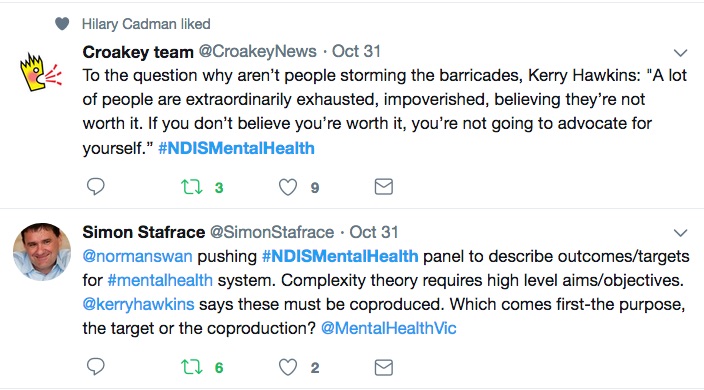