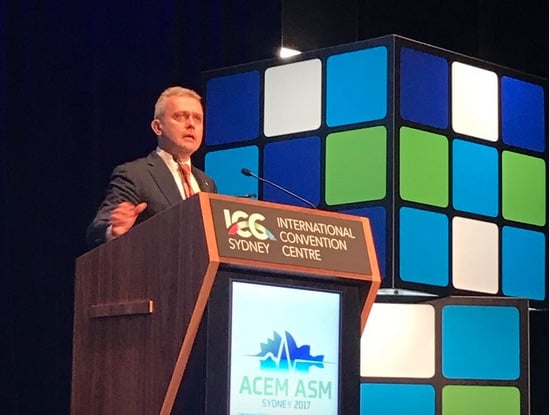 As disasters escalate within Australia, our region, and globally, how prepared are our health systems to cope, and what challenges might we face?

These were recurring questions at the annual scientific meeting of the Australasian College for Emergency Medicine (ACEM) in Sydney this week – #ACEM17.

In a meaty program tackling some of the biggest issues for emergency medicine, sessions ranged from climate change-driven disasters and public health emergencies like thunderstorm asthma, through to lessons from the 2014 West Africa Ebola outbreak.

In the first of two articles on these topics for the Croakey Conference News Service, Amy Coopes writes that the targeting of health facilities and staff is another critical challenge for global health security, with the World Health Organization (WHO) documenting almost 1,100 of these attacks over a 3.5 year period.

In the video interview beneath the article below, the WHO’s Dr Rick Brennan also describes the development of new collaborative models to restore health services to countries experiencing protracted conflict, such as Yemen.

The World Health Organization (WHO) is facing “unprecedented” demand globally for crisis responses, according to Dr Rick Brennan, an emergency physician from Australia who is director of emergency operations at the WHO.

He said the WHO was currently dealing with nine top-tier incidents – well above the projected trend of one every few years – with four new events emerging this year alone, in Bangladesh, the Democratic Republic of the Congo, Ethiopia and Somalia.

Crises in Syria, Iraq, South Sudan, northern Nigeria and Yemen had been going for some time and were continuing to pose challenges, he said.

The data he presented was staggering: more than 200 new disease outbreaks every year, 200 million people affected by natural or technological disasters and 65 million people displaced globally – 80 percent due to conflict.

He said 1,500 new pathogens had emerged, with major outbreaks in recent years of SARS, H1N1, MERS, Ebola and Zika.

Climate change was already contributing to this picture, Brennan said, giving the example of the Darfur conflict, which was largely driven by drought.

With the conflict in Syria now running longer than World War Two, and the average displacement period for refugees globally at seven years, Brennan said business as usual in the relief and development sector was no longer an option.

The protracted nature of conflicts presented a major challenge in the delivery of health care, with the traditional method of rush in, deliver aid, rush out being outdated and ineffective, and donor fatigue a constant issue, he said.

Because they endured for so long, contemporary conflicts also presented multi-factorial health challenges far beyond simple trauma, with major outbreaks of cholera, lassa fever, malaria and yellow fever in Yemen this year alone.

The modern context also posed unique threats for health workers, Brennan said, with facilities and staff increasingly targeted. Between 2014 and 2017 there had been more than 1,000 such attacks, claiming 1,500 lives.

Funding, lack of local capacity, state fragility and insecurity and bureaucratic bottlenecks were also issues in the delivery of health, he said.

In recognition of the major risk to global health security of protracted conflicts, Brennan said the World Bank had put unprecedented new funding on the table for a pilot in Yemen on a new relief delivery model which, if successful, would be rolled out in other top-tier contexts. This pilot was a partnership with the World Food Programme, WHO and UNICEF.

In a bid to stay ahead of the curve, Brennan outlined the WHO’s global event-based surveillance system, which reviewed about 3,000 signals a month and actioned rapid risk assessment on those deemed to be of significance to public health at a national, regional and international level.

This, and other measures, including a new global health security agenda to replace the old international health regulations, had assumed greater importance following the 2014 West Africa Ebola outbreak.

He said 85 countries had signed onto the new agenda and 47 had tested their national systems, with after-action reviews in 10 countries where outbreaks had occurred.

“Ebola really was a watershed in how we think about global health security,” Brennan told delegates.

The event had exposed “very limited capacity at a country, regional and global level to prevent outbreaks, prepare for them and respond effectively,” he said.

Brennan described national health workers on the frontlines as the “real heroes of the day”, facing a risk of contracting the deadly haemorrhagic disease 32 times greater than the rest of the population, as well as collapse of local health systems due to the pressure, with implications for malaria and other chronic conditions.

Ultimately, 898 health care workers contracted Ebola during the response and there were 518 deaths: 50 percent of these occurred in nurses and 12 percent among doctors. The vast majority of these were locals, with just 18 cases among international workers and three or four deaths. 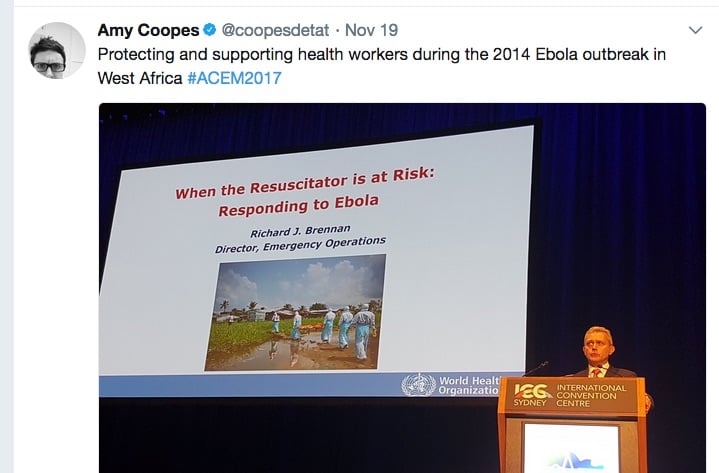 Brennan said weak local health systems and a delay by the WHO in recognising and responding to the outbreak had been factors in its spread, with 28,000 cases and 11,500 deaths by the end of the event.

Fear, rumours and misunderstanding among local communities had also contributed to this “perfect storm” of outbreak escalation, he added. Engagement of civil society including religious and women’s groups had been essential in addressing this.

He said 5,500 WHO staff were trained and 1.42 million pieces of personal protective equipment (PPE) were delivered. 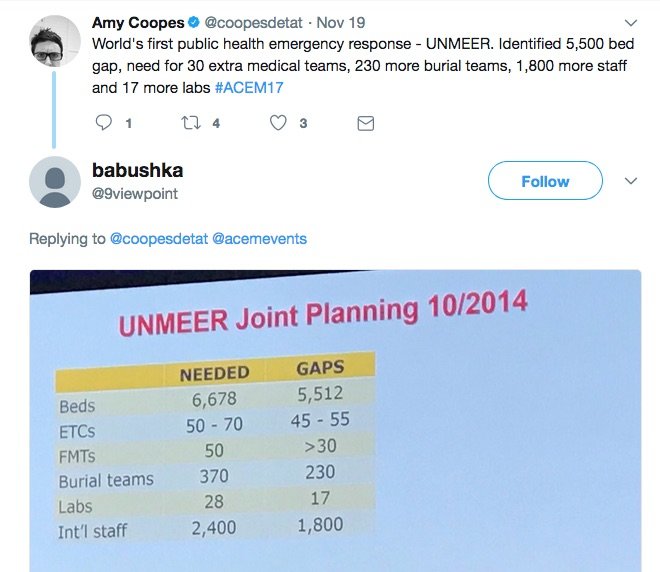 Vehicles, accommodation and other sites posed an infection risk. Medevac with biocontainment capacity and a willing end destination were challenges, and in the end Brennan said no country was willing to accept evacuated African locals, only foreign staff.

“We really were building the ship as we were sailing it,” said Brennan of the Ebola response.

• Stay tuned for a second article on disaster preparedness, which will examine gaps in Australia’s capability, and lessons from thunderstorm asthma outbreaks in Victoria and NSW. 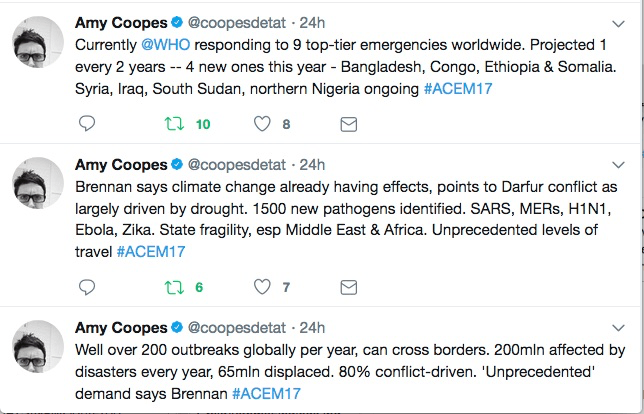 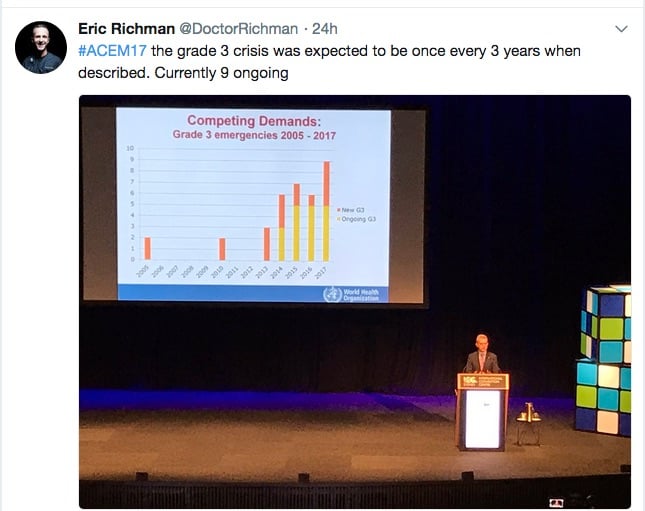 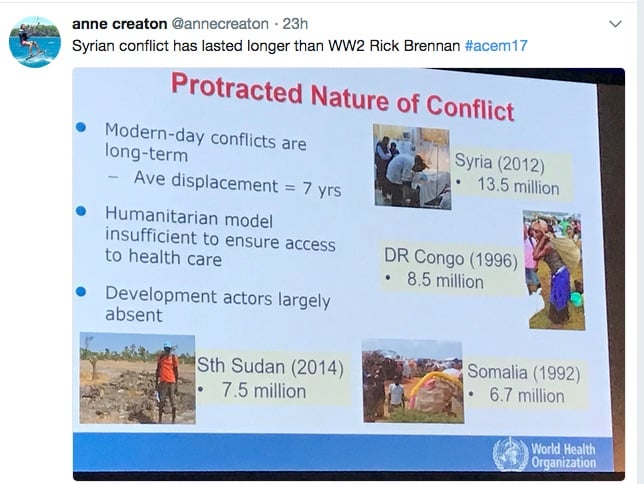 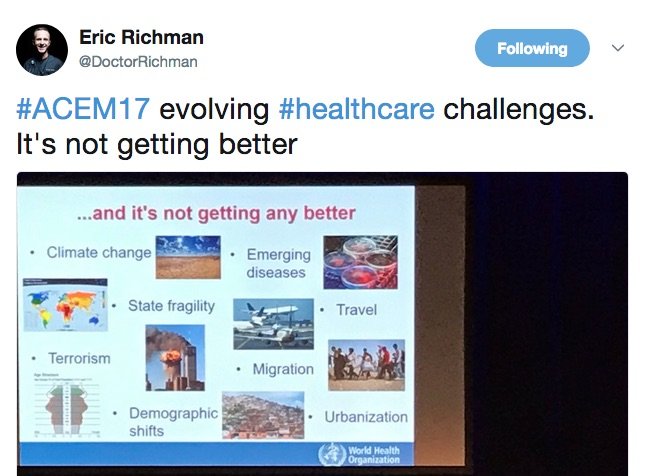 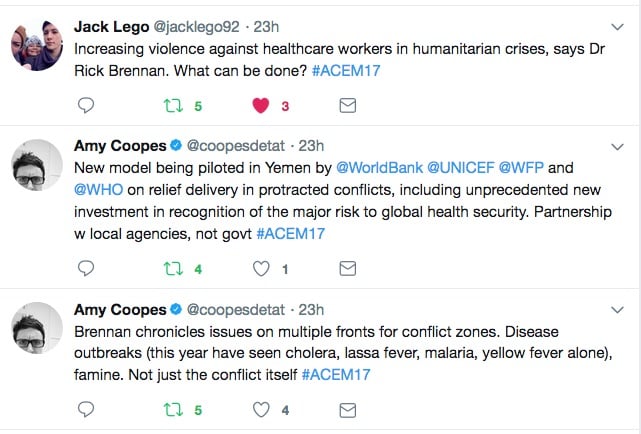 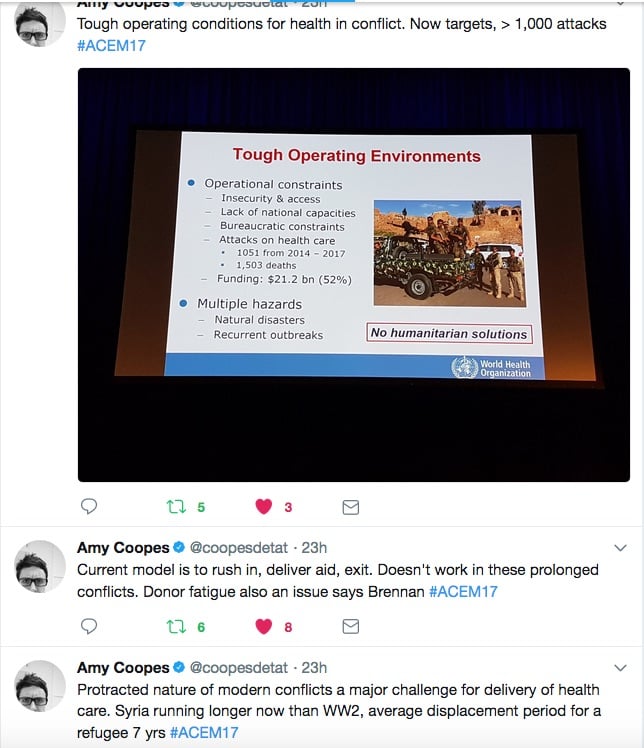 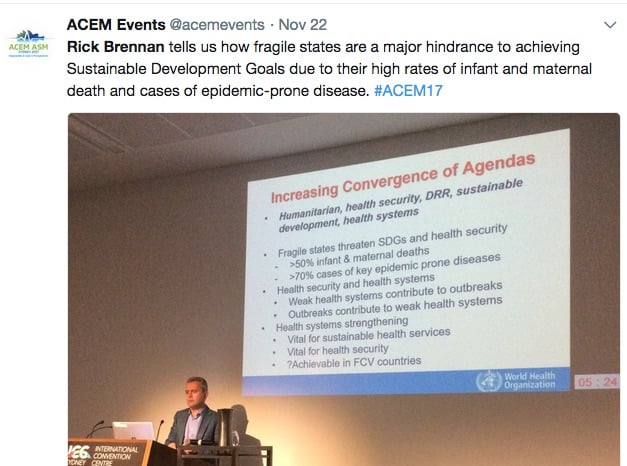 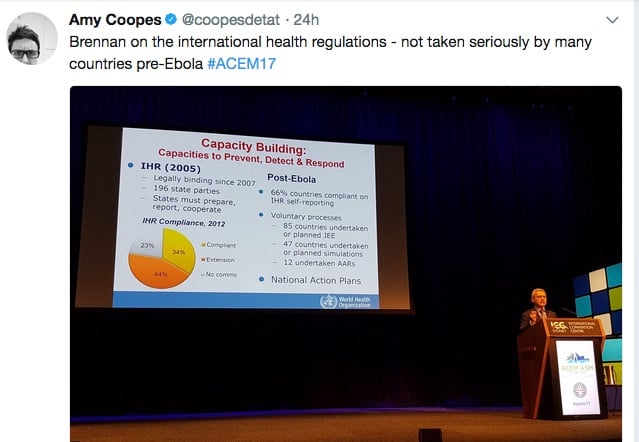 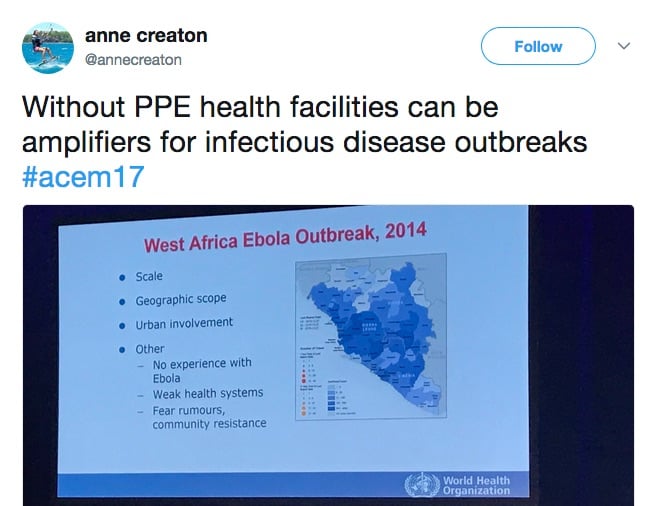 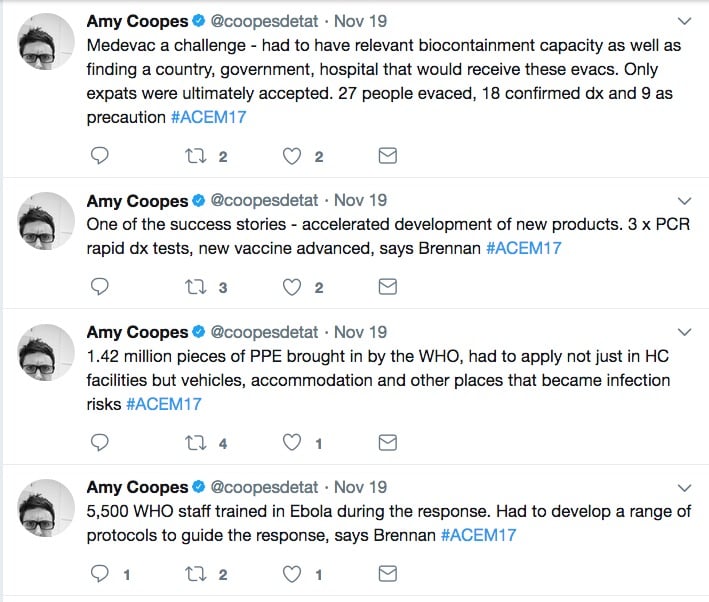 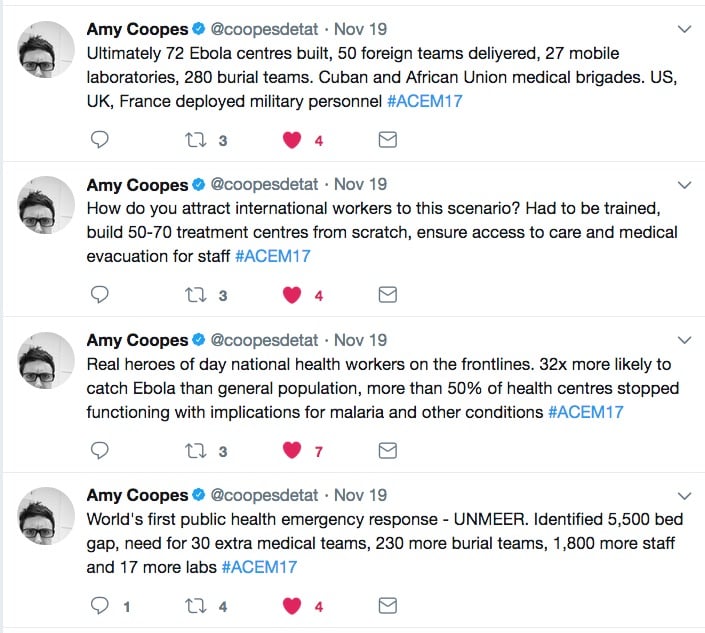 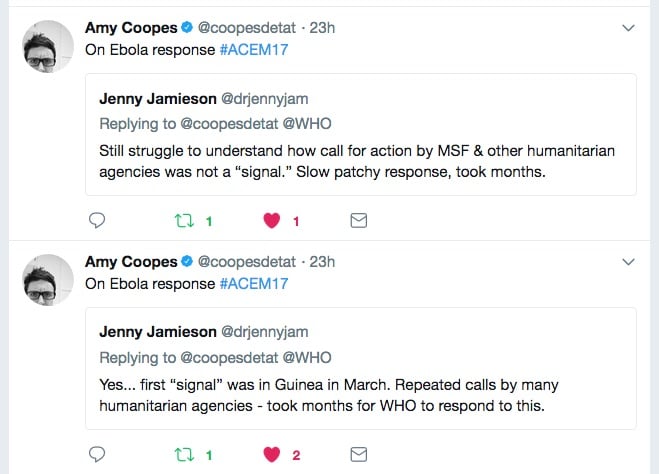 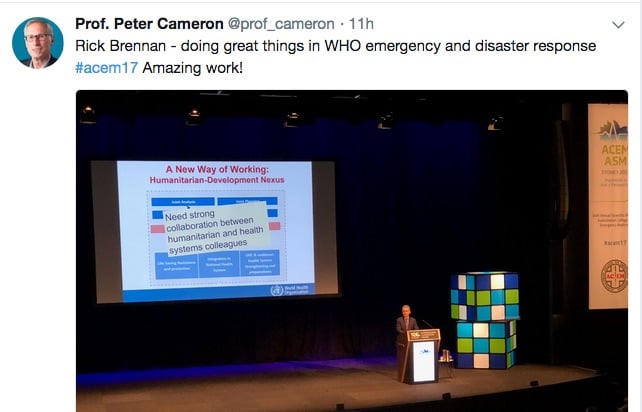