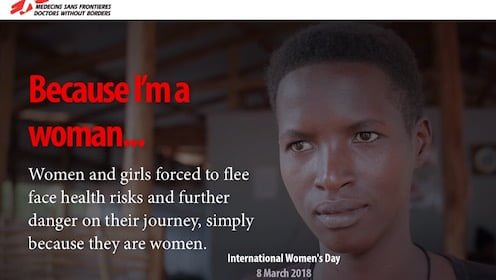 Displacement puts women at risk: here are some of their stories

For International Women’s Day 2018, against the backdrop of record levels of displacement, Médecins Sans Frontières is highlighting how health needs are exacerbated for women and girls on the move.

Below, Dr Margaret Bell, Médecins Sans Frontières Women’s Health Medical Advisor, backgrounds the challenges these women face, and the organisation’s work with them.

You can also watch some of the individual women’s stories in the embedded short videos. And you can find out more about the campaign, and view more individual stories here.

One of the first babies born at a Médecins Sans Frontières clinic this year was a little boy belonging to Raheema*, a Rohingya refugee now living in Bangladesh. Our medical staff found that Raheema was suffering pre-eclampsia, a life-threatening pregnancy complication, and provided her with emergency care before helping her deliver a new life on New Year’s Day.

Raheema is one almost 700,000 people who have fled extreme violence in Myanmar since August last year, seeking safety in Bangladesh. Globally, she is one of 65.6 million people who are currently forcibly displaced due to violence, persecution or human rights violations. More people are displaced than ever before in history. And around half of those displaced are women and girls.

Displaced women have many of the same women’s health concerns as women anywhere, such as a need for access to family planning and a safe place to deliver babies. But women’s specific health needs are exacerbated by being on the move, and access to medical care is reduced or non-existent all along the displacement journey.

Reproductive health on the displacement journey

While every displaced woman follows a different journey, many flee due to conflicts. These circumstances can have a devastating effect on health infrastructure, meaning that women lose access to healthcare even before they leave. Once on the move, healthcare can be out of reach due to lack of services, distance, transport barriers, lack of finances or uncertainty about available services. Prevailing insecurity can also hinder access.

Any displaced population will include pregnant women like Raheema, but many don’t have access to the medical care that she was able to receive. Pregnancy carries risks for any woman, but more so when they are displaced. These women are more vulnerable to miscarriage and pre-term delivery, but less able to access antenatal care, a safe birthing environment or emergency obstetric care. For women anywhere, we know that 42 per cent of all pregnancies will have a complication, and 15 per cent will have a life-threatening complication – so a lack of access to emergency obstetric care makes giving birth extremely dangerous for displaced women.

Women on the move may also want to delay pregnancy until their lives are more stable and secure, but not have access to any contraception. They may have started their journey with contraceptives, but lost or run out of these on the way. This lack of family planning can lead to unwanted pregnancies which increases the risk of unsafe abortions. This can have dangerous consequences as unsafe abortions are a major contributor to maternal mortality, accounting for 13 per cent of all maternal deaths.

Many displaced women and girls will experience sexual violence. While this type of violence occurs anywhere, women are more vulnerable when on the move, particularly if they are travelling alone or if they are adolescents. Sexual violence may be used, for example as a deliberate strategy to punish or control communities during conflict; by border guards abusing their power; or in coerced exchange for basic needs such as food. Sexual violence is a medical emergency that can lead to sexually transmitted infections, such as HIV, unwanted pregnancies and long-term mental health consequences.

During field assignments with MSF I have met so many displaced women who have been exposed to sexual violence. I recall one woman who was pregnant as the result of rape. She had only been displaced a short distance due to a natural disaster, but her husband was missing, leaving her alone and vulnerable to violence in a crowded displaced person’s camp.

She came to our clinic for an HIV test, but also because she was determined to keep her baby, having lost two previous children in infancy. Like so many women she had a variety of inter-dependent health needs. We provided her with regular antenatal care, but ultimately it was our psychological support that she needed most.

Mental health care is another of Médecins Sans Frontières’ key activities for displaced women and girls, who have often been exposed to traumas such as witnessing extreme violence. The uncertainty of life in a refugee settlement is another stressor. Families are often separated, leaving solo women with the pressure of supporting children in an unfamiliar environment with little resources or services. Women may deprioritise their own health care, and particularly their mental wellbeing, because they are so busy meeting their children’s basic needs.

As global displacement has increased in recent years, so too has Médecins Sans Frontières’ work focusing on the needs of migrants, asylum seekers and refugees. Our activities respond to the specific needs of women at various points on their journey, whether displaced in their own home countries like Iraq or South Sudan, in transit countries like Greece or Mexico, or in countries where they have settled like Jordan or Tanzania.

While there are no easy solutions to the protracted conflicts that have sparked this huge wave of global displacement, migrants and refugees are also subject to restrictive policies that put their health and lives at risk. It is in this context that Médecins Sans Frontières works, providing critical medical care to women like Raheema to reduce their suffering, and ultimately to prevent them from dying while they seek safety.

*Margaret Bell is Women’s Health Medical Advisor, Médecins Sans Frontières. She is a registered nurse/midwife who has been on four field placements with Médecins Sans Frontières since 2003: in South and Western Sudan, Nigeria and Haiti. In addition to a clinical midwifery role she has been responsible for establishing women’s health clinics encompassing pre- and postnatal care and care for victims of sexual violence. Margaret has also been involved in training local midwifery staff. Margaret is currently the manager of the Medical Unit in Sydney as well as providing technical support to the field and training on care for victims of sexual violence. On twitter @MSFAustralia