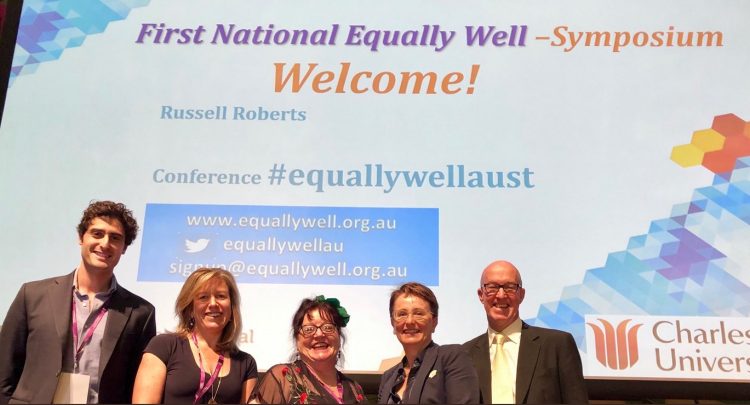 Caro Swanson and Helen Lockett (3rd and 4th from R), together with other conference speakers

In its early days, a movement in Aotearoa/New Zealand to address the poorer physical health of people with mental health conditions sparked some alarm bells among those with lived experience of mental illness.

However, a recent national conference heard how these concerns were addressed, reports Marie McInerney, who is covering the Equally Well symposium, held in Melbourne last Friday, for the Croakey Conference News Service.

As a person with lived experience, Caro Swanson did not need to be convinced that people with mental health conditions suffered poorer physical health than the rest of the population.

“Even when I started using mental health services 30 years ago, we all knew we popped off earlier than most people,” the New Zealand mental health advocate said in a keynote address to the Equally Well symposium.

On one hand, she welcomed moves that began about five years ago in the NZ mental health and addiction sectors to address the number of “untimely and unexpected deaths” occurring among people using their services.

However, she was also uneasy about the development of what became the world’s first Equally Well strategy and collaboration, which looked to address the inequitable physical health toll for people with mental health problems.

I had the scary feeling of stuff being done to and for us, without us.

I was also worried that we are a group of people who are under intense scrutiny a lot of the time and ‘now you’re going to put the rest of our lives under scrutiny too!’

Not only do we have to reveal our deepest, darkest (thoughts), not only do they get examined, talked about and judged by people we don’t even know, but now you’re going to start looking at our physical health and make judgements there as well.”

Echoing the experience of many other people with lived experience who spoke at the symposium, Swanson said she had struggled with weight gain as a side effect of both mental health issues and the treatment for those issues, particularly anti-psychotic medication.

“For me, having monthly girth measurements wasn’t going to do anything for my mental health,” she said.

Another concern was whether everyone with serious mental health issues actually wanted to be given an extra 20 years of life.

“I was really concerned that no-one had asked us if we wanted to live the extra years because, to be honest, unless our lives are worth living why would you want that, and some of our decisions about how we live are made on that premise.”

“I was really concerned about the impact when people with lived experience suddenly realised this was them, that these awful statistics belonged to them.”

She has also been a lived experience champion of Equally Well in New Zealand since its formal inception in 2014.

Her concerns were assuaged, she told the symposium, by what happened when she brought them up with Equally Well pioneer and strategic advisor Helen Lockett.

“That’s when I became a champion. The more we talked together, the more we realised how aligned we were, but also how we could trust each other to have, not quite difficult conversations, but really frank ones, and checks and balances with each other.”

Swanson told Croakey she still holds the concerns to a degree, because there is always a tendency for people “with all the right intentions to patronisingly do the ‘what’s best for you’ thing”.

But she said those concerns have led to a sensitivity about how people might work on Equally Well efforts with people with lived experience and how to send out messages in the right way.

Swanson and Lockett jointly presented at the Equally Well symposium, the first event in Australia to bring together people who have signed up to a Consensus Statement aimed at improving the physical health and wellbeing of people living with mental illness in Australia.

Lockett described how New Zealand has led the way on establishing an Equally Well collaborative, seeking to bring together disparate parts of the health sectors – “people effecting change at multiple places in multiple levels” – to work together on both systemic and program level change.

She said the collaboration is now beginning to produce strategic shifts, such as having routine screening of people using mental health or addiction services as a priority area in New Zealand’s National Diabetes Strategy.

Another has been having the Heart Foundation recommend cardiovascular screening from the age of 25 years for people with severe mental illness (schizophrenia, major depressive disorder, bipolar disorder, schizoaffective disorder).

This year will see a focus on oral health, on the needs of Maori and Pacifika communities, and in contributing to a high level review of New Zealand’s health and disability system that is currently underway, and to the national government’s response to a major inquiry into mental health and addiction services.

“We’ve got a groundswell of people (taking action at the local level) but there are some things at a policy and funding level that can make things easier for us,” said Lockett, who works at the not-for-profit Wise Group and is a senior advisor to the Organisation of Economic Cooperation and Development (OECD) and the New Zealand Government. 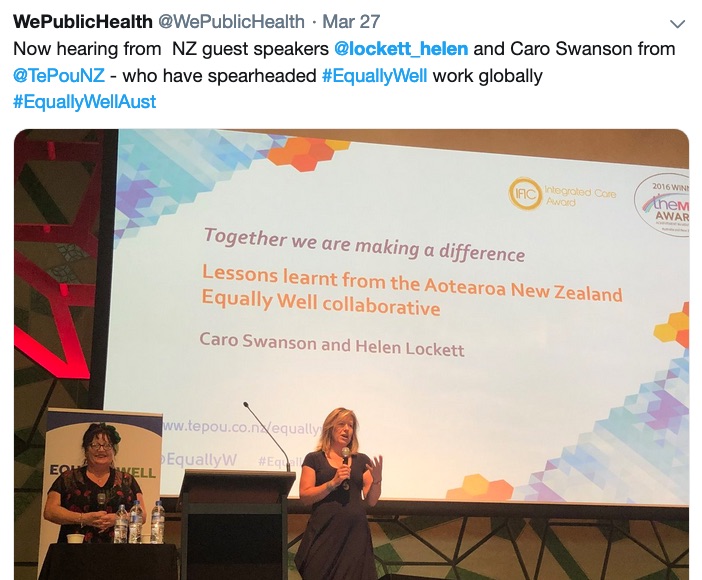 Lockett and Swanson say an important step in addressing concerns of people with lived experience has been to ensure that Equally Well has not focused on so-called “lifestyle factors” as the drivers of inequity.

Lockett admitted she initially had wanted to include lifestyle issues, given that they were “all over the literature”.

But for Swanson, this focus was part of the stigma, the “patient blaming” that leads to stereotypes in and out of mental health services.

What we showed was, yes, lifestyle choices are part of it, but we all have those and we don’t all make good ones. But there are all these other things that affect (people with lived experience) as well.

It took the blame off the person and put it where it (belongs), with some of our systems that don’t work well together and with things that were unnoticed before all this.” 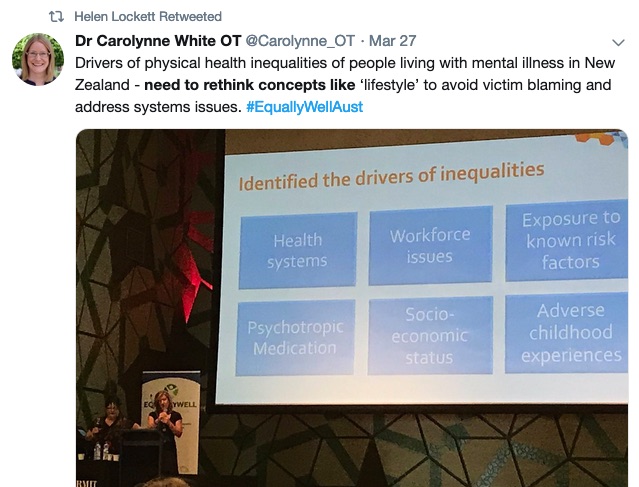 Lockett gave as an example the separation of mental health and drug and alcohol addiction services from mainstream health, geographically as well as in funding.

That makes it incredibly difficult, for example, to get early intervention for diabetes if you’re in a mental health or addictions hospital.

We have a lot to learn about equity and experiences, that whenever there is a group that experiences disadvantage or a lack of power, it’s too easy for the system to blame the person rather than to look at the system.”

So-called ‘diagnostic overshadowing’, where health professionals see all physical health issues through a mental illness lens, is also a big issue to address, as are the social determinants of health, “people living in poorer quality homes, not having a job, not having a high enough income”.

The breadth of the contributing factors requires response from a “diverse collaborative” of people across services – from pharmacists and dentists to exercise specialists, cardiovascular specialists and psychiatrists, Lockett and Swanson said.

They offered some tips for building and sustaining such a collaboration:

Watch this interview with Caro Swanson and Helen Lockett 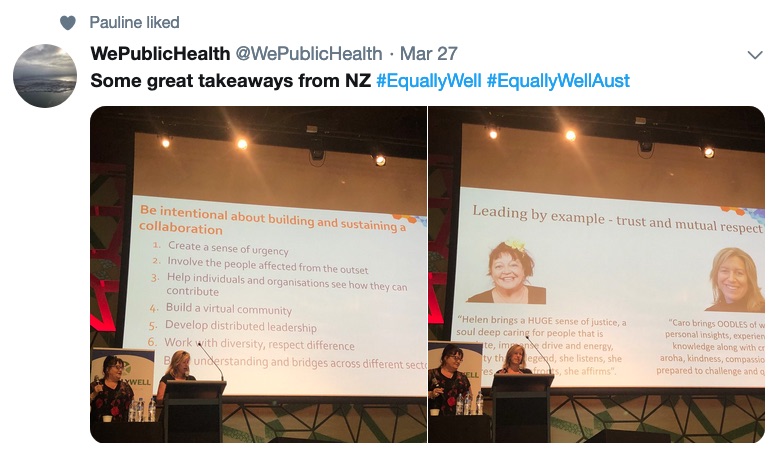 Victoria’s Equally Well Framework, the first of its kind in the state, was also launched at the symposium, and lauded for the “unprecedented” level of consultation by government with people using mental health services and their carers was also hailed at the symposium in the launch

We often get to comment on documents like this, and sometimes, our feedback is acted on, (though) often it is not. We never think that’s okay because, after all, these documents are about our lives.

But this is the first time we’ve been asked to write our own section of a formal framework. I think that’s very significant (but) more so because we were never asked to change anything that we wrote. Our contribution was included word for word.”

Launching the framework, Chief Mental Health Nurse Anna Love said it describes a range of initiatives for organisations and clinicians to work in partnership with consumers and carers to discuss physical health in the context of a mental health recovery plan. 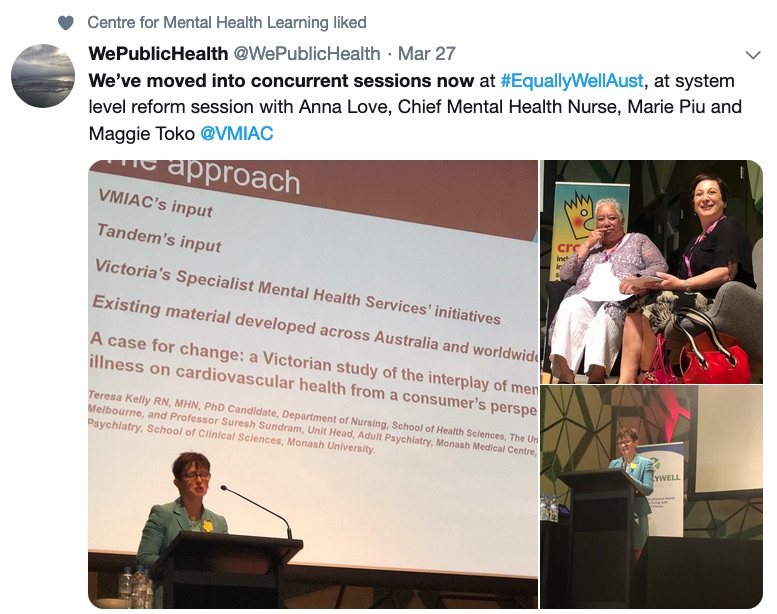 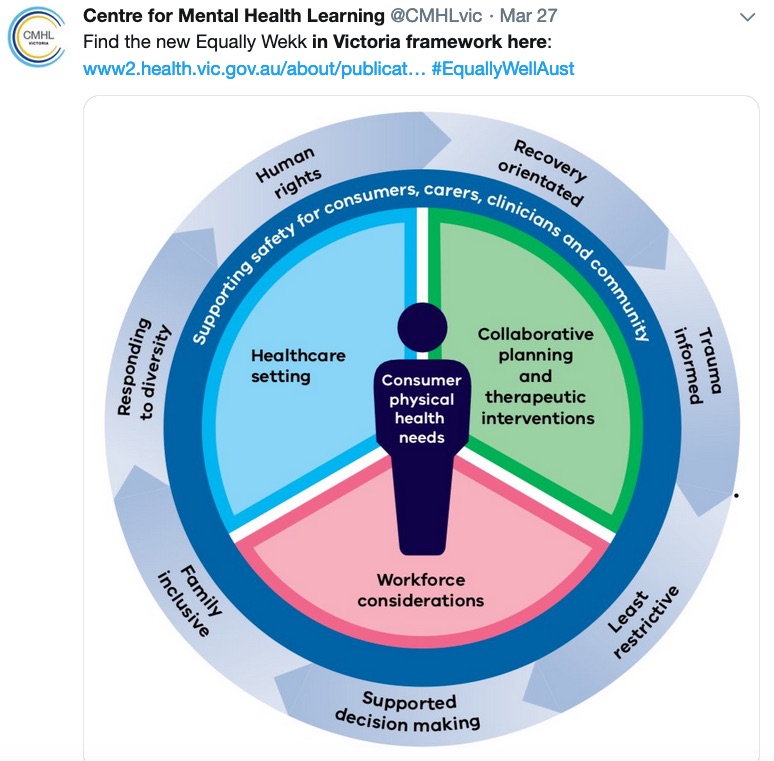