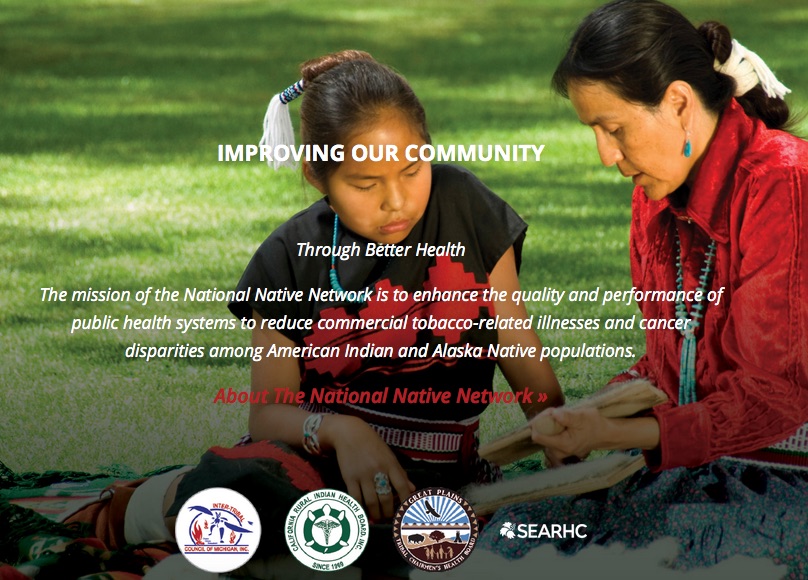 Around the world, diverse and innovative programs are tackling high smoking rates among Indigenous communities, according to presentations at the World Indigenous Cancer Conference in Brisbane last week.

Some of these are big and nationwide like the Tackling Indigenous Smoking program led by Professor Tom Calma in Australia.

Others are small, innovative and targeted, from efforts to “Keep it Sacred” among the Navajo tribes in the United States, through to a board game developed to help Maori Aunties to discourage smoking among young pregnant women. 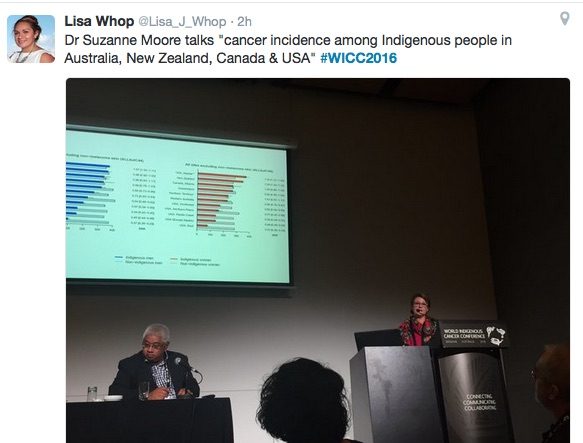 The conference also heard of the profound impacts of tobacco upon Indigenous communities.

Lung cancer is one of the most common cancers in Indigenous populations, according to the first ever comparative population-based study of cancer incidence in Indigenous people in Australia, New Zealand, Canada, and the United States.

Led by Australian researcher Dr Suzanne Moore, of the Menzies School of Health Research, it also found that smoking is more common in Indigenous communities in all four countries than in their non-Indigenous counterparts.

Another key message from the conference was the impact of “stop start” government policies and a failure to address the social determinants of health that lead to high smoking rates in Indigenous communities.

Harvard Public Health Professor David Williams, who presented a keynote address on the role of race and racism in health, said one important way to address tobacco-related cancers in Indigenous communities is to “address stressors in smokers that drive them to smoke”.

It was also important to focus on the equity impact of anti-smoking policies, he said, where tobacco taxes have a bigger effect on poorer people.

One media campaign that he said had worked better with minority young people in the United States focused on the deceptive practices of the tobacco industry rather than on the health impacts of smoking.

Professor Tom Calma, Chancellor of the University of Canberra and a founder of the Close the Gap Campaign, is ever optimistic about the success of the Tackling Indigenous Smoking initiative, after the Federal Government last year committed funding and resources to a redesigned program.

He told that conference that the initiative, launched in 2010, has helped to reduce Indigenous smoking rates, that have been falling at a faster rate than was seen in the general population, and he expects the 2016 national census to confirm anecdotal expectations of more success.

Part of its power, he said, is to not focus on the perils of smoking – “that’s known” – but to talk about the benefits of non-smoking – “not blaming, but empowering”.

It’s targeted big sporting activities, like the popular Murri Rugby League carnival, which is smoke and drink free and requires all players to complete a ‘Health Check’ in order to participate, the Nuff of the Puff program aimed at young people, and the successful Break the Chain promotion which is also being used in mainstream campaigns.

But, he said, it had suffered from the “wax and wane” approach of governments – notably from a $30 million a year cut in funding under the Abbott Government and disruption of its work while a review of its operations was carried out by Assistant Health Minister Fiona Nash (see more detail in this previous Croakey story).

That had created workforce instability in the Tackling Smoking and Healthy Lifestyle Teams across the country, and disrupted goodwill that had been built up in communities and organisations since 2010.

As a result, he said, Australia is not going to meet its target of halving 2008 Indigenous smoking results by 2008.

“We have to rebuild all that now,” he said.

“If we have consistent government policies instead of the ‘stop start’ (approach) we’ve seen, the vulnerability of funding, and the demoralising of the community….then we will see even faster gains,” he told Croakey.

“When you start to engage with people, they need to know there’s a future. Our people have too often invested a lot of time and effort into initiatives of government, just get excited about it, and then there’s a change of direction, change of Minister, change of government. It’s got to stop.”

There’s hope that the new national Aboriginal and Torres Strait Islander Cancer Framework developed by Cancer Australia in partnership with Menzies School of Health Research will help to bring consistency and broader population based approaches.

Calma said it’s an easy-to-read document that is the result of extensive consultation with the Indigenous community, and “that everybody needs to sign up to”.

Prevention is Priority 2 – see the image below. 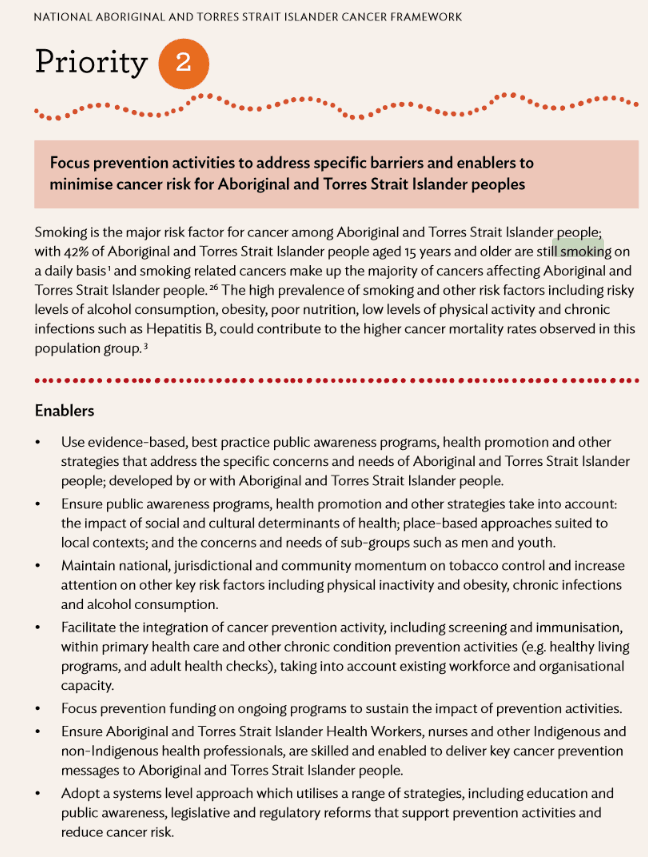 Tobacco has been used by the Navajo, along with most other American Indian nations, for centuries as a medicine with cultural and spiritual importance, said Scott Leischow from the Mayo Clinic in the US.

Traditionally the Navajo healers would go into the mountains and collect what they call ‘mountain smoke’ that grew naturally, to use in their ceremonies. But over the decades, he said, it’s become more common to just go to the local store and buy commercial tobacco instead, helping to further normalise the use of tobacco and continue to grow high rates of smoking.

Leischow told Croakey the Mayo Clinic has been working to support tribal organisations that are supportive of the “Keep it Sacred” movement to reduce use of commercial tobacco, which should lead to reduced commercial tobacco-related illnesses and cancer disparities among American Indian and Alaska Native populations.

“So some of the tribal organisations are now working to create a policy within healing communities to only use mountain smoke,” he told Croakey. The Mayo Clinic has helped by making videos where healers talk about the role of commercial tobacco and how it has impacted on traditional ways, which will then be disseminated to schools and communities.

Leischow is also working with tribal organisations that are trying to promote smokefree workplaces and public places. This is a complex and contentious policy area, he said, with many American Indian communities fearful that smoking bans in casinos, which have become an economic lifeline for many, will impact on business.

(Check here to see success stories from Keep it Sacred).

One-quarter were cancer survivors, she said, in an area where the majority of people with tobacco-related cancer were back smoking within two years of ceasing treatment.

The project used a combination of motivational support and nicotine replacement therapy (NRT).

A big feature was that participants were given a mobile phone, so they could receive tailored text messages each day: a traditional Indian quote and/or personal messages such as: “I am quitting smoking so I can watch my granddaughter go through ceremony”.

The cultural and ceremonial use of tobacco was an issue too with the community, although the novelty of the phones was a big one, with many participants having never had one before. In fact, Burhansstipanov said, some non-smokers had gone to the local casino, where smoking is permitted, to try to build up the carbon monoxide levels in their blood so they could qualify for the program. Others built up pretty high phone bills, just calling information lines.

But, she said, “that’s why they call it research” and while results are still unofficial it is showing great promise. Burhansstipanov said the norm for stop smoking interventions was to get a quit attempt rate of about 7 per cent, and up to 12 per cent in very effective interventions.

As of October 2015, she said, 45 per cent of study participants had attempted to quit. They expect a lot of relapses, but also attempts to try again. “The number of times people restart makes it more likely they will quit in future.”

Burhansstipanov was speaking at an early morning symposium on traditional and innovative arts and media-based research to prevent smoking and cancer.

The forum also heard about the ‘Talking about Smoking’ project among the Yolngu people of East Arnhem Land. You can read more and watch a video about it here.

Researcher Moana Tane said the Yolngu were introduced to tobacco by Macassan traders and “traditional and culural factors have contributed to normalisation of smoking”. Narali (tobacco) is celebrated and viewed as an essential part of culture, although interestingly most in the community are happy to have smoke-free homes.

There was a need to consider “very carefully” how to intervene, not wanting to offend and denigrate a cultural relationship built up over hundreds of years, but also to be confident offering support because it is what the community want. 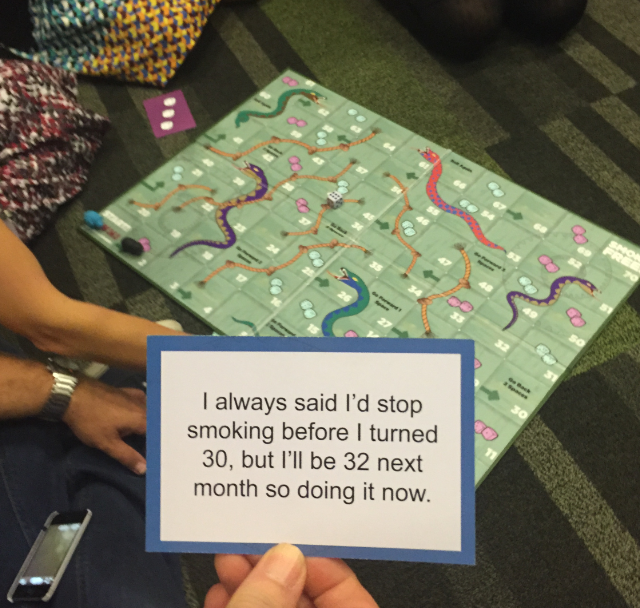 And then it was game time. Maori Public Health Professor Marewa Glover explained she wanted to find a way for Aunties to support young pregnant Maori smokers to quit, so she developed a board game to help them deliver essential messages on smoking, nutrition and antenatal care.

Like a Snakes and Ladders game, it’s based, she said, on Robert West’s theory of addiction, where quitting smoking is not a straightforward journey. It has ‘low dice’ cards to connect with low motivation days, and ‘high dice’ cards when smokers are more likely to listen to quit messages. The snakes represent relapse.

“The Aunties were much more interested in playing a game than having me stand and lecture,” she said.

• The feature image is from the Keep it Sacred website.