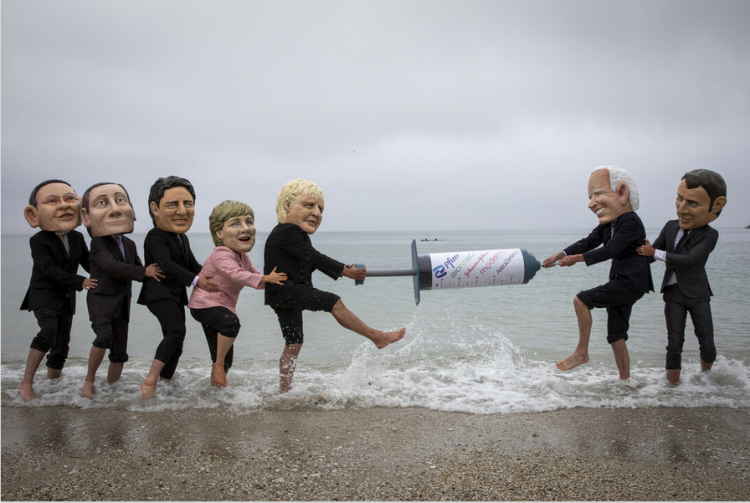 Introduction by Croakey: Rich nations meeting as part of the Group of Seven (G7) in England on the weekend failed to commit to action on the COVID-19 and the climate crisis at the speed and scope that the world needed, according to their many critics.

Marie McInerney reports on the responses from key civil and public health groups and experts.

Public health experts, anti-poverty groups and climate campaigners have slammed the failure of the G7 leaders at their summit in England on the weekend to properly grapple with the crises facing the globe on COVID-19 and climate change.

Max Lawson, Head of Inequality Policy at Oxfam, said this G7 summit would “live on in infamy” for failing to meet the needs of the world at this time.

“Faced with the biggest health emergency in a century and a climate catastrophe that is destroying our planet, they have completely failed to meet the challenges of our times,” Lawson said, echoing criticisms of many other groups.

The World Health Organization was more tempered in its response, saying the G7’s commitment to donate 870 million vaccine doses (see this analysis on how the headline figure of a billion doses was calculated by the G7), was “a big help”.

“But we need more and we need them faster,” said WHO Director General Tedros Adhanom Ghebreyesus, who told the G7 Summit on Saturday that, “to end the pandemic, our shared goal must be to vaccinate at least 70 percent of the world’s population by the time the G7 meets again in Germany next year”. That would amount to 11 billion doses.

“The COVID-19 virus is moving faster than the global distribution of vaccine,” he said as the G7 wrapped up its four-day summit in Cornwall.

Tedros said the global decline in overall COVID-19 cases “masks a worrying increase in cases and deaths in many countries”, with the steep increase in Africa especially concerning, given it has “the least access to vaccines, diagnostics and oxygen”.

Former UK Prime Minister Gordon Brown said the summit will be “remembered only for failing to honour Boris Johnson’s pre-summit promise to vaccinate the entire world: an unforgivable moral lapse when every three months Covid-19 is destroying 1 million lives”.

World Federation of Public Health Associations (WFPHA) President and chair of the new Public Health Leadership Coalition, Professor Walter Ricciardi, was also disappointed, saying the G7’s commitment on COVID-19 was “in the right direction, but it’s still too little…we should act more and quicker”.

“We are already very late, we are losing time,” he told Croakey.

Ricciardi, a COVID-19 advisor to the Italian Government, said he was not surprised the G7 had failed to act at the speed and scope required, “given the fact that governments are very much tied by their political agenda”.

However, he said, that meant it was “our responsibility” – civil society and scientists “that are informed about the consequences of these kinds of decisions” to urge politicians and other decision makers to “do more and do better”.

Ricciardi urged broad adoption globally of the report, COVID-19: Make it the Last Pandemic by the Independent Panel for Pandemic Preparedness and Response, headed by former New Zealand Prime Minister Helen Clark and former Liberian President Ellen Johnson Sirleaf that was recently released after an investigation urged by countries like Australia.

It was, he said, “one of the best reports ever written”, and a “benchmark for independence, evidence, moral rigour and ethics”.

Little to celebrate on climate change

The G7 communique made a number of commitments on COVID-19, including to roll out (nearly) an additional billion vaccination doses, increase and co-ordinate global manufacturing capacity on all continents, improve early warning systems and support science “in a mission to shorten the cycle for the  development of safe and effective vaccines, treatments and tests from 300 to 100 days”.

It also promised to work for fairer recovery that “has not been the case with past global crises” and to champion a fairer global tax system “that reverses the race to the bottom” with backing for a new global minimum tax rate that aims to stop large multinational companies from exploiting tax havens.

On the climate crisis, the summit committed to cutting emissions and seeking to limit the rise in global temperatures to 1.5 degrees, and to net zero no later than 2050 and halving collective emissions over the two decades to 2030.

However, that commitment provided “little cause for celebration from anyone worried about climate change”, according Geosystem Science Professor Myles Allen, Director of Oxford Net Zero at the University of Oxford.

Writing at The Conversation, he said most of the pledges that emerged were “relatively old news”, and that the G7 leaders had failed again to agree to new funding to help poorer parts of the world invest in green technology and adapt to extreme weather.

“But more interesting than these pledges and non-pledges were the things that weren’t mentioned at all,” he said. One of the “greatest unmentionables at climate summit after climate summit is just how badly we keep track of contributions to global warming”.

Still the promises made by the G7 continue to outstrip Australia’s commitment, with the UK High Commissioner to Australia, Vicki Treadell, suggesting on ABC Radio today that Australia could face carbon border tariffs if is does not “raise ambitions and set targets”.

Meanwhile, on the new Trade Agreement between the two countries, The Guardian reports that, “few details have yet to emerge from an initial agreement that remains to be completed, signed, and implemented”.

US President Joe Biden described his administration’s decision to purchase and donate half a billion Pfizer vaccines to 92 low- and lower middle-income countries and the African Union as “an historic action that will help supercharge the global fight against the pandemic”.

However, overall the G7 leaders made “few concrete, strong, or deep health-related commitments” at the Cornwall summit, according to Kent Buse, Director of the Healthier Societies Program at the George Institute for Global Health, Imperial College London, and Katri Bertram, founder of Partners for Impact (PFI), writing in the BMJ.

In a damning piece, they wrote that the world might have expected “a series of bold commitments to end the global pandemic as quickly as possible, addressing challenges such as vaccine equity, as well as fundamentally resetting global health collaboration”.

Instead, the G7 had delivered five pages on health and a four-page annex “full of rhetoric” and “barely engaged” with the important work of the Independent Panel on Pandemic Preparedness and Response, Buse and Bertram wrote.

While the G7 acknowledged the proposal for a Pandemic Treaty, a Global Health Threats Council, and reforms to pandemic financing; and gave a nod to strengthening WHO, mentioned human rights and gender, and committed to establishing a stronger global surveillance network, “it failed to indicate how it might support any of these initiatives”.

See their table comparing to the G7 commitments to the asks of the Independent Panel.

Independent Panel co-chair Helen Clark urged the rich nations to move away from country-by-country vaccine distribution in favour of WHO’s COVAX facility, “which knows where the greatest need is and how to roll it out” and to urgently act on the so-called TRIPS waiver, which could free up pharmaceutical companies’ intellectual property rights on COVID-19 vaccination and treatments.

Speaking on CNBC TV, Clark said there should be a standing provision under TRIPS to waive intellectual property rights whenever a pandemic is declared, declaring “we should not have to mess around negotiating it, pandemic by pandemic”.

She said global inequity in the pandemic was escalating, with health care workers caring for COVID-19 patients in intensive care units of poor nations still unvaccinated themselves, “putting their lives on the line”.

“Who wants to live in a two tier world where, in our little bubble in high income countries, we get on with life while in the vast rest of the world, they are grappling with it,” she said. “This is no route for peace and harmony”.

Croakey has sought responses a number of times from the office of Trade Minister Dan Tehan on the TRIPS waiver, amid reports from advocates that it is one of 12 members states of the World Trade Association “blocking this lifesaving proposal”.

We are yet to receive any response on what its position is and what result it is seeking to achieve at the WTO.