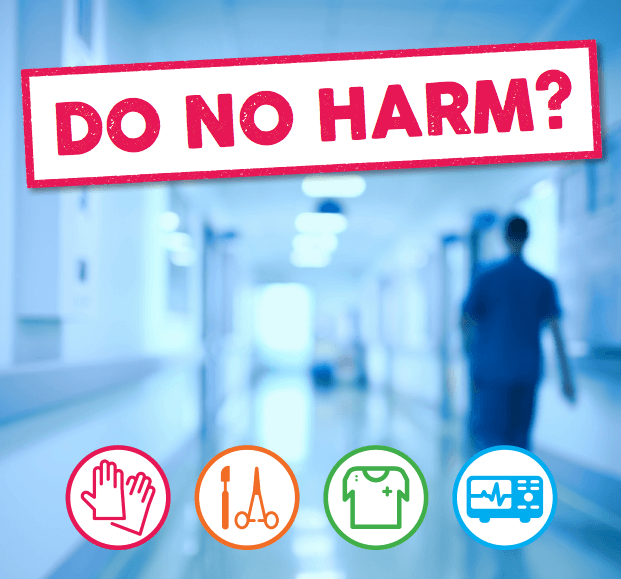 There are unacceptable hidden costs in the production and procurement of medical goods by Australian companies and government, according to a new report published on Thursday by the Australian Nursing and Midwifery Federation and The Australia Institute.

The report – Do No Harm: Procurement of medical goods by Australian companies and government – documents mounting evidence of labour and human rights abuses in the overseas production of goods such as gloves, surgical instruments, clothing, footwear and electronics.

It calls for action at corporate and government levels, saying Australia is not doing enough to stop exploitation of workers, including children, in low-wage countries in their supply chains.

The report’s author Martijn Boersma outlines the key findings and recommendations in the post below.

The Australian healthcare industry is large and growing: the sector employs 1.167 million people, which is 11.6 per cent of the total workforce, health spending has tripled in the last 25 years to $161.6 billion a year, and the share of the economy represented by health has reached 10 per cent, which means that of every $100 spent, $10 is spent on health. In the 2014–15 financial year, $6,657 per person was spent on health goods and services.

An astonishing 150 billion pairs of medical gloves are produced each year. Yet the sourcing of natural rubber is marked by forced and child labour, while the production of gloves is characterised by hazardous working conditions and labour rights violations. In 2013, 300 workers were fired after a strike at the Sri Lankan facility of Australian glove producer Ansell. Only last year did unions secure an agreement that sees the majority of workers rehired.

The production of scissors, forceps, scalpels and suture needles is also associated with labour and human rights abuses. The city of Sialkot in Pakistan produces around 80 per cent of the world’s supplies. The steel for the surgical instruments is sourced from forges in nearby cities, where there is a lack of health and safety and no trade union representation, while child labour is widespread in smaller backstreet forges and workshops.

Medical goods such as electronic healthcare equipment are also linked to exploitation. Important materials used in the production of electronics such as tin, copper, gold, tantalum and tungsten are associated with a high risk of human rights violations: the United States Department of Labor identifies 28 mined goods that are associated with forced labour, and 12 that are connected to child labour.

Although the healthcare sector constitutes the fourth largest ASX industry and includes businesses that produce goods such as gloves and healthcare electronics, as well as procuring companies such as aged-care providers, specialised healthcare services, and companies that retail pharmaceuticals, the Australian healthcare industry is not doing enough to address the human rights risks in its operations and supply chains.

The Do No Harm report finds that while most healthcare manufacturers show that they are aware of their human rights impacts, their policies often do not address critical areas such freedom of association, sourcing of raw materials, vulnerability of migrant workers and access to remediation.

Among procuring healthcare companies, only two out of ten have established and disclosed a supply chain or sourcing policy, while other ASX-listed healthcare procurers neglect to publicly address the human rights impacts of their business activities.

Through its purchasing power, government in Australia can also exert considerable influence on human rights in medical goods supply chains. The Federal, State and Territory governments spent $108.2 billion on health in 2014-2015, constituting respectively 41 per cent and 26 per cent of total government expenses.

As non-labour expenses typically comprise around 30-40 per cent of health budgets, procurement makes up a large part of health spending and needs to be managed appropriately. Yet, the report finds that government procurement guidelines focus on “value for money” and largely neglect ethical dimensions. The persistent focus on driving the prices of medical goods down further exacerbates worker exploitation and undermines attempts to improve their circumstances.

Australia lags behind other governments that work to protect workers in medical goods supply chains, such as in the United Kingdom, Sweden and Norway. Overseas developments show that the Australian government does not have to reinvent the wheel when it comes to ethical procurement in the healthcare sector, but can learn from best practices elsewhere.

Encouragingly, in February 2017 the Attorney-General George Brandis announced an inquiry into Establishing a Modern Slavery Act in Australia, similar to the Modern Slavery Act in the United Kingdom. If established, this act would likely introduce reporting requirements for Australian companies and require businesses to perform risk assessments and demonstrate measures taken to mitigate human rights abuses.

Producers and procurers of healthcare goods and services in Australia should heed the principal teaching in the medical world, the Hippocratic Oath, which centres around the promise to abstain from doing harm. As Australians, we would do well to remind each other that in taking care of ourselves, we should not harm the well-being of others.

Martijn Boersma is a researcher at the University of Technology Sydney and United Voice, specialising in supply chains, labour standards and business ethics. He authored the Do No Harm report while working at The Australia Institute.

PrevPreviousWho is listening? What health professionals and services must learn from Ms Dhu’s death
NextPeak health groups sound the alarm about abolition of 457 visasNext