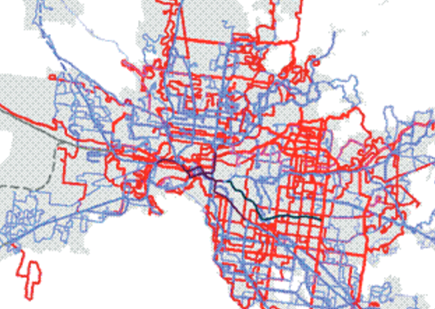 Do we deserve good cities? Then we need more than roads, rail & buses

Introduction by Croakey: Debate over the rate and pace of Australia’s immigration program continues, fueled once more by former Prime Minister Tony Abbott in a speech last month to the Sydney Institute, calling for reduced immigration until the “infrastructure” is unclogged. He said:

“My issue is not immigration; it’s the rate of immigration at a time of stagnant wages, clogged infrastructure, soaring house prices and, in Melbourne at least, ethnic gangs that are testing the resolve of police.”

It’s an argument that resonates on the other side of politics too, with former New South Wales Premier Bob Carr appearing on the ABC’s Four Corners recent program –  Big Australia: Are we ready? – and later on a QandA program on the same issues.

A long-time resident of one of Sydney’s eastern beach suburbs who once declared Sydney was full, Carr called for a halving in our immigration rate, saying:

When you contemplate the eastern suburbs of Sydney, access to the beaches, which is a natural space, recreational space, what do you do? Do you have fences and turnstiles? When the population around Bondi, for example, reaches the sort of intensified level that means the roads are choked most days in summer, do you start to ration access to the coastal walking trails along the coast? And down the national park? Fences, turnstiles, online ticketing. I mean, that’s the sort of dystopia that we can see coming at us through the mist.

In the post below, Professor Evelyne de Leeuw, director of the Centre for Health Equity Training Research and Evaluation (CHETRE), says the immigration and population debate in Australia becomes predictably focused on ‘hardware’ – the infrastructure and regulation of cities – and less about what is at their heart, what makes them good places in which to live, and how we make them truly sustainable.

This is an edited and expanded version of a post published originally at the CHETRE blog. 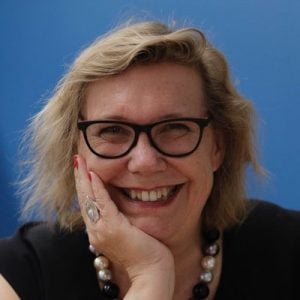 It was a relatively stale talkfest, so one afternoon I skipped class with some Danish community development friends to explore the poorest districts of the city. Argentina’s slums are called ‘Villas’ – the term coming, reportedly, from the phrase villa miseria (village of misery) used in the 1950s by journalist Bernardo Verbitsky. Obviously they don’t even remotely resemble the multi-million dollar villas you would see in Point Piper on Sydney’s harbour.

We ended up passing around and sipping Yerba Mate tea with a bunch of heavily tattooed slum dwellers. We chatted about life in the slum  – how it allows communities to live under the radar, but also how that invisibility masks the true lives and living conditions of many city dwellers, particularly when they require public services or rights.

Coming from highly ordered north-western Europe, the ramshackle environs pained me, not in the least because I couldn’t see how the apparent chaos could inspire either security or good health. At one point, I wondered aloud if all of these ‘heavies (including their mamas and glorious troupes of kids) lived in the Villa illegally. Oh no, they responded, they were very legal, and they showed us how.

First they pushed me and my Danish pals up a creaky ladder onto the hot tin roof so we could look over a dusty plain at the edge of the slum.

Some of the Mate-sipping youths appeared with a couple of slender tree trunks, sheets of corrugated iron and rope. Within minutes they had tied together a shed. They ran back into the Villa and came lugging back two old Pirelli tires, a table and a mattress. The tires went on the roof, the table and mattress under it. “There!” the grandfather next to me on the roof said. “Now we have a legal dwelling.” Apparently something with a roof, a table and a bed cannot be bulldozed.

I had witnessed the most rapid urban sprawl ever.

It’s legal, but is it any good?

I was reminded of this as I watched the latest debate in Australia around population growth and urban planning unfold.

Population growth isn’t necessarily bad and can be sustainable – if managed well and with inspired and informed ideas about purpose and function – spatially, morally, economically and in terms of human development. And urban planning is not just about putting in the hardware, although in the debates on ABC’s Four Corners and Q&A  it seemed that the major issues revolved around the kilometers of asphalt, tunnel, and rail.

As I have said before, urban planning, the liveability of our cities, and the sustainability of place is built on that hardware, but cities come alive and acquire meaning through the human spirit that is unleashed upon them. In good and bad ways.

Let’s take a look at the 2015 report  by Victoria’s Auditor-General on public transport. Its singularly most significant message comes from Figure 3B, the ‘disharmonisation of Melbourne buses and trains, 2011’ (see below). The title should have been ‘The shoddy chaos of Melbourne’s transport network’. 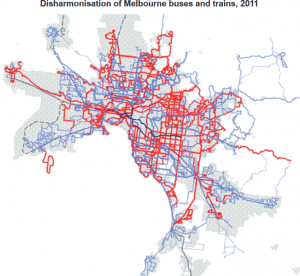 Who wants to wait at a wet draughty bus stop (it is Melbourne, after all) for a vehicle that may or may not come in half an hour? Worse – the same report shows that there is a direct relation between public transport chaos and socio-economic disadvantage: if you are poor, you are made to wait.

Further, it tells us that if you live towards the edge of suburbia you may be forced to own a car – at great expense. Because public transport inefficiencies are coupled with lacking bicycle infrastructure. 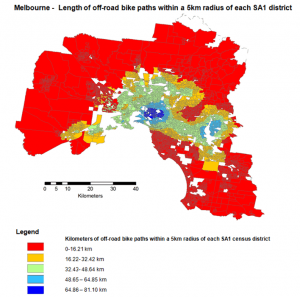 Let’s be very clear: this is supposedly one of the most liveable cities in the world. Professor Billie Giles-Corti alone has amassed terabytes of data on a virtual googolplex of variables that together map the liveability terrain in Australia. That sheer body of knowledge should allow us to create healthy urban planning. And indeed, Australia is home to a virtual raft of eminent urban planning and urban health experts, so surely we get it right, don’t we?

Well we don’t. Just because it’s data rich or legal, it ain’t necessarily right. Just like building another makeshift shack on the outskirts of a Buenos Aires Villa.

It can be argued that the liberal (larrikin?) spirit of the Australian outback has prevented a strong value based politic of urban planning in this country. Indeed, in most welfare state typologies we find this great sunburnt country of ours grouped in with our free market friend  – the United States. State interference is regarded as the enemy of individual liberty, everyone should be able to do what they want, and if they want to commute every day for four hours, never see their partners and children during waking hours and suffer disproportionately from obesity, diabetes and other non-communicable disease, so be it, it is a free world.

But we know it is not a free world, and we shouldn’t suffer from shoddiness, corruption, loss of human dignity and a general spirit of ‘homo homini lupus’ (‘Man is wolf to man’). We have transcended that, not just in our arts and culture, but in the ideas we have about a good world. 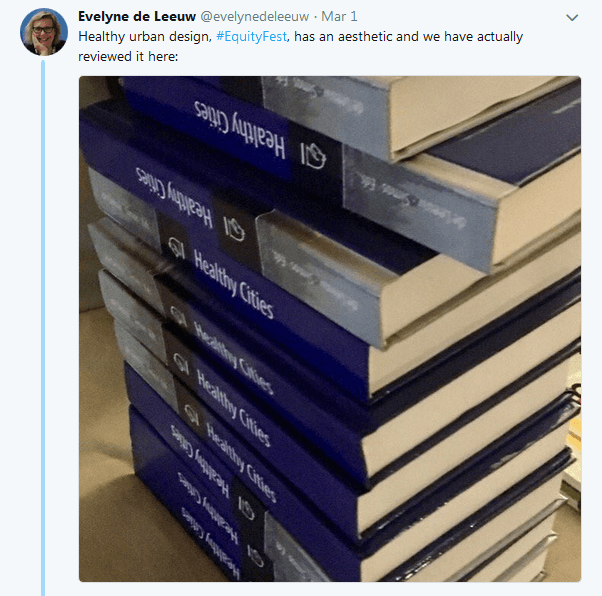 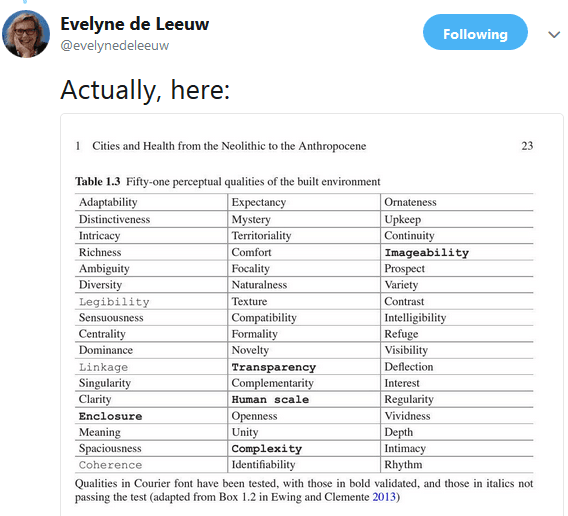 A good world is a green and sustainable world for us and those we love, for its Traditional Owners, the next generation and for our guests. It is a world of solidarity and caring, provided where needed through our public institutions. It is a world of beauty and surprise that we can navigate easily and with wonder. The infrastructure for population growth and urban planning should take into account long term ecological balance.

To do that we need to accept that we are (part of) nature, we are not just here to mine and exploit it, especially in Australia’s fragile ecosystem. But we do not seem to take pride in our land and our being here.

In a citizenship pledge for new Australians we should include a commitment to the sustainability of this ancient and delicate land. 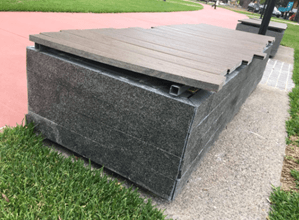 I live in Sydney and I do not own or drive a car here. Every morning I walk through Bigge Park in Liverpool to my office. Liverpool Council has made a tremendous effort to rejuvenate this bit of green space. Recently tradesmen (nope, did not spot a woman…) installed new benches. This (pix, right) is what they looked like just a few weeks later, with planks missing and decidedly not unequivocally ‘seat-worthy’. 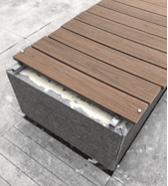 On Q&A Jane Fitzgerald, Executive Director of the New South Wales Division of the Property Council of Australia, said “we have a choice” – insinuating that we, the people, are at a crossroads where an abstract ‘we’ can choose for healthful and sustainable population growth and urban living.

But ‘we’ are not aware of that choice and maybe we are not up to it. I would not entrust my urban (health) future to people who delivered this shoddy workmanship. I’m not sure our community peers, family elders, intellectuals, politicians, and even infrastructure developers and commercial exploiters are ‘we’ that can be endowed with a choice. Not if this – or how S class trains, with no air conditioning, dangerous traverses between carriages and unhealthy seating, were recently pressed back into service in Sydney – is an example of the quality of the world they currently shape.

In other countries where I have lived – The Netherlands, France, Denmark, Canada (Quebec), the United States (California) –  there is profound concern and ready action for the red (built), grey (infrastructure), blue (water) and green (nature) environment. Often there are long term plans to invest billions over decades in a comprehensive sustainable future.

They are inspired by vision and values, which can often start small, that only require imagination and persuasion to adapt the infrastructure to new, healthy, sustainable and future proof standards.  Every streetlight can become an electric car charger. Vast concrete slabs that are our streetscapes can be torn out and become permeable surfaces that allow green to thrive and reduce heat islands.

Another travel story. I was in The Netherlands a few months ago. They invented a road surface called ‘Zeer Open Asfalt Beton’ (ZOAB) (Highly Permeable Asphalt Concrete). It allows rain to drain very quickly, in most freezing conditions, making for safer and quieter roads.

There is one rare drawback: if there is an accident with a fat(ty) spillage, the open spaces in the surface become clogged and the road becomes a disaster zone. This happened when I was there: a truck with thousands of litres of frying fat crashed and lost its load. Disaster! Or not…? It was announced that when ZOAB was invented in the late 1980s this was foreseen. They had also manufactured four ‘cooking engines’ that were located strategically on the highway network and actually steam the road surface clean.

The authorities could estimate with great precision when the road would open again (410 minutes). Yes. they invested more, They also did it better. In the end it would cost less.

Vision, imagination and persuasion win. Have we seen any of this recently in Australia? 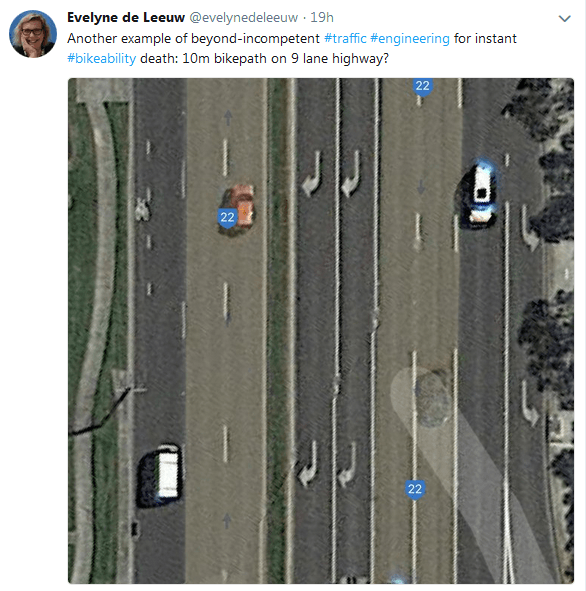 Professor Evelyne de Leeuw is director of  Centre for Health Equity Training Research and Evaluation (CHETRE) at the University of New South Wales’ Centre for Primary Health Care and Equity. You can follow her on Twitter at: @evelynedeleeuw

PrevPreviousAs climate change hits home in Kiribati, leaders ask, “What do you care about?”
NextIt’s our first Pop Up Workshop! All about communications, social media & advocacyNext