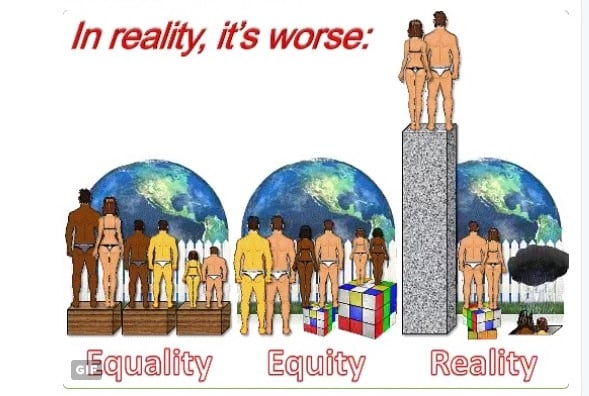 Do you earn enough for gold, silver or bronze healthcare?

Labor’s election campaign has enlisted former Prime Minister Bob Hawke in an advertisement warning that a re-elected Turnbull Government would privatise Medicare (watch it at the bottom of this post).

“Everybody knows you don’t set up a Medicare privatisation taskforce unless you aim to privatise Medicare,” Hawke says.

(For some previous Croakey reading on moves towards privatisation, see links at the bottom of this article.)

The advertisement was launched today as healthcare policies finally made centre-stage in the campaign, with Labor announcing public hospital and primary care policies, and Health Minister Sussan Ley promising an overhaul of private health insurance.

She said policies would be categorised as gold, silver or bronze, depending upon what they cover, and that the reforms would make it easier for consumers to shop around, increasing competition in the private health sector, and improving value for money and affordability for consumers.

While there is plenty of room for reforming private health insurance – see some suggestions here – the Government’s announcement may have the unintended consequence of reminding voters of inequities in access to healthcare.

The announcement resulted in this somewhat contradictory headline – Government promises to create a tiered private health system that’s fairer – while conjuring up internet memes symbolising structural inequities (see the image below, as well as the feature image). 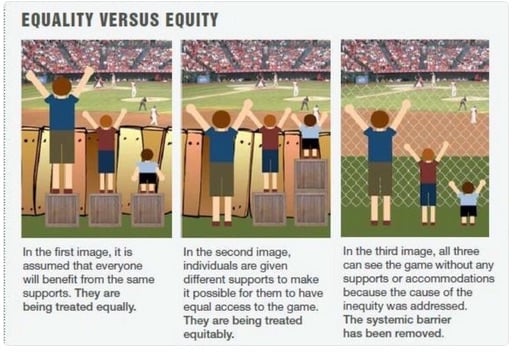 As Alison Verhoeven, Chief Executive of the Australian Healthcare and Hospitals Association (AHHA) responded to the Minister’s announcement: All Australians should have access to gold standard healthcare, not just those who can afford private health insurance.

• Developing standard definitions for medical procedures across all insurers so that consumers can compare policies more easily.
• Simplifying billing so that consumers can receive a single bill covering all costs of a medical procedure – such as the surgeon and anaesthetist – to avoid unplanned bill shock.
• Ensuring that insurers use plain English and disclose policy information in a consumer-friendly way.
• Making fine print and commissions more transparent.
• Maintaining community rating.
• Addressing regulatory issues that are adding to the cost of premiums and discouraging innovation.
• Working with industry to develop products to meet the specific needs of Australians living in rural and remote Australia.
• Ensure the current gateway www.privatehealth.gov.au reflects these improvements and allows consumers to more easily compare policies and access information.

Labor will work with State and Territory Governments to negotiate new targets and reward funding arrangements to drive improvements in waiting times.

Labor will work with the States and Territories on the next long-term agreement, to put hospitals on a sustainable footing beyond the current agreement period.

In negotiating the new long-term agreement, a Shorten Labor Government will be guided by the Australian Healthcare Reform Commission. Labor has announced that it will establish the new, permanent Commission to advise all governments – Federal and State – and embed reform in our health system. Like Labor’s successful Health and Hospitals Reform Commission, hospitals will be one of the new Commission’s key priorities.

As part of this work, Labor will task the Commission with looking at the role the Commonwealth may play in subacute care, including rehabilitation, palliative care, geriatric evaluation and management, and psychogeriatric care.

Labor will re-commit to funding 50 per cent of the efficient growth in hospital costs over the next four years and invest in reducing elective surgery and emergency department waiting times.  Labor’s four-year commitment brings the total contribution of a Shorten Labor Government to $4.9 billion above the Liberals’ disastrous cuts.  This has a net budget impact of $2 billion over the four years.

New models will include the design of a uniquely Australian Patient-centred Medical Home – ‘Your Family Doctor’. This new model will invest in innovative primary care that:

New models will include the design of a uniquely Australian Patient-centred Medical Home – ‘Your Family Doctor’.

A Shorten Labor Government will roll out these models across Australia. Labor will utilise the Primary Health Networks in the roll out. Partnerships between general practices and other primary care service providers, Aboriginal Community Controlled Health Organisations, Community Health Centres and GP SuperClinics will be considered for launch sites.

Labor will ensure an appropriate mix of PHNs in metropolitan, regional and rural areas, so that the models developed meet the needs of all Australians. Labor also recognises that the capacity of PHNs varies, having been established for less than a year after the Abbott-Turnbull Government’s decision to break its election promise that no Medicare Locals would close.

An independent evaluation will be conducted after two years. It will inform the development of a plan to expand access to the ‘Your Family Doctor’ model nationally via the Centre for Medicare and Healthcare System Innovation.

Labor recognises that reform in primary care takes time.  Development, demonstration and roll out of a uniquely Australian model of the patient-centred medical home is not something that can be achieved without significant effort and resources. It will be a decade-long process.

All Australians should have access to gold standard healthcare, not just those who can afford private health insurance, says Alison Verhoeven, Australian Healthcare and Hospitals Association (AHHA) Chief Executive.

“Today’s Labor Party health policy announcement would ensure more adequate funding for Australia’s public hospitals, restoring targets to drive quality and efficiency in care, agreed on a collaborative basis by the Commonwealth and the states.

“This is a positive way forward in ensuring that public hospitals can deliver the services that all Australians rely on, particularly for those who are unable to afford private health services or for those faced with medical emergencies or with serious illnesses requiring highly complex care.

“In regard to today’s announcements on private health insurance, the AHHA notes that health insurance is heavily subsidised by the Commonwealth, and plays a very important role in the funding of health care in Australia. Improving the quality of health insurance products, by ensuring greater transparency in policy information for consumers and by assisting choice through ranking systems such as the gold-silver-bronze standards proposed by the Coalition parties today, is a welcome measure.

“We welcome also the Coalition proposal for policies which might better suit the needs of consumers in regional and rural areas.

“The AHHA strongly endorses the Labor Party proposal to end subsidisation of policies which provide cover for non-evidence based natural therapies. With finite health dollars, subsidies must be well-targeted.

The Australian Healthcare and Hospitals Association is the national peak body for public and not-for-profit hospitals, Primary Health Networks, community and primary healthcare services; and advocates for universal, high quality and affordable healthcare to benefit the whole community.

Both side of politics have at the weekend issued policies promising a better health deal, underlining the need for improvements in public hospital financing and private health insurance, the Consumers Health Forum says.

“We welcome the commitments by the Coalition and Labor.  While they reflect significantly different priorities, the policies each deal with issues of central importance to the future of the Australian health system,” the CEO of the Consumers Health Forum, Leanne Wells said.

“Labor’s promise to increase public hospital funding and reduce surgery waiting times is backed by a recommitment to a funding formula which has shown that it can generate more efficient, cost-effective patient care.

“We also welcome Labor’s commitment to implementing patient-centred health care home models of care in Australia, matching the Government’s commitment to Health Care Homes.  This is the way of the future for funding and delivering care for people with chronic and complex conditions, including those with mental illness.  It is pleasing to see all parties commit to this.

“The Coalition’s promise to revamp health insurance to give people more certainty about the cover they have paid for represents a significant step forward for consumers.

“The plans to make insurance cover and medical billing simpler and introduce tiers or levels of insurance to link premiums more clearly to choice of cover are developments that are reflected in the MyCover plan for reform which the Consumer Health Forum proposed to the Government last year.

“CHF has long argued for consumer-friendly reforms in health insurance to reduce the frustration and uncertainty so many people experience.

“CHF has also advocated that only those policies which meet standards of comprehensiveness, simplicity and clarity should qualify for the health insurance rebate.

“We would hope the Government will consider using the rebate to stimulate a better deal for consumers.  The rebate costs taxpayers $6 billion a year when there remains widespread dissatisfaction with health insurance as surveys by both CHF and the Government have shown.

“We would also urge the Government to consider matching Labor’s commitment to disqualify alternative therapies which lack evidence from eligibility for the rebate.

The standardisation of policies and simplified billing to reduce the current “bill shock” patients can experience are also welcome steps.

“The fundamental issue that lies behind the policies of both Government and the Opposition is the need for consumers to have access to quality services.  While it is vital that privately-insured patients get the care they reasonably believe they are insured for, an effective public hospital system fundamental to Australia’s health system,” Ms Wells said.

CHF will publish its Federal Election Report card appraising the health policies of all parties in late June.

• Previous Croakey articles on privatisation: Are corporations taking over?; What are the implications of outsourcing Medicare and PBS claims?; Telstra Health and cancer registries