Do you support the No Ads Please campaign? It’s a fair question to ask your doctor, say consumer health advocates

More than 200 health professionals have taken a pledge to ban pharmaceutical reps from their rooms since the launch last week of the No Advertising Please campaign, and it’s interesting to read some of their comments.

GP Dr John Boffa wrote:
Academic detailing influences the prescribing of doctors substantially and it should only be allowed from not for profit education providers. The Central Australian Aboriginal Congress has not allowed pharmaceutical company reps on the premises since its inception in 1975. The nexus between Big Pharma and the academic detailing of doctors must be broken along with all of the other financial incentives to prescribe against evidence.

GP Dr Gerard Ingham wrote:
Drug reps undermine our professional standing and independence, particularly in the eyes of our patients. I’ve found the lunches give me indigestion.

GP Dr Stuart Anderson wrote:
I see no reason why my prescribing choices, and the consequences of these choices that flow on to the health of my community, should be influenced by marketing rather than evidence.

GP and WonkyHealth columnist Dr Tim Senior wrote:
I support this campaign because:
1. I want my patients to be confident that I am prescribing medicines only because it will benefit them.
2. I don’t want my prescribing decisions to be determined by the samples I have in the cupboard.
3. There is a big difference between evidence and marketing.
4. I can afford my own pens.
5. I like my home-made lunches.

GP Dr Geoffrey Spurling wrote:
As a registrar, I trained during the rofecoxib (Vioxx) era and prescribed it to a number of patients. Turns out, the information about its cardiovascular risks was known for at least two years before the drug was withdrawn. I don’t trust information from drug companies. 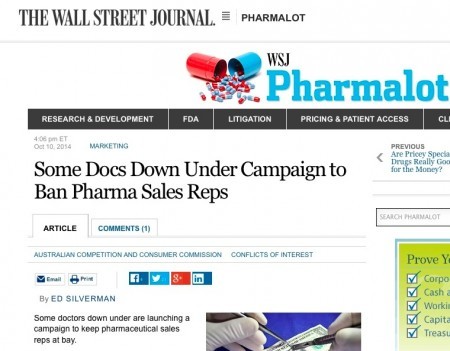 Meanwhile, at a public health advocacy workshop in Fremantle today I profiled the campaign as an example of the power of informed, engaged networks in the digital era.

The campaign – which has generated widespread media coverage – was created for minimal cost (if you don’t count the many hours of volunteer labour).

Its instigator, GP and medical writer Dr Justin Coleman (who has previously written about the campaign at Croakey), says its outcomes to date include:

No doubt the widespread media coverage may also have an impact on the attitudes of patients and the wider community.

In the article below, Consumers Health Forum of Australia CEO Adam Stankevicius suggests that it is “reasonable and rational” for patients to ask doctors about their views on pharma marketing.

The No Ads Please campaign to ban visits by pharmaceutical company reps has lit up a delicate aspect of patient-doctor relations.

The campaign, which has drawn international interest, prompts the question that many patients would be reluctant to raise:  should they be asking their doctors if they accept “educational” visits and perks from drug companies?

The widespread acceptance by medical practices of “educational”/spruiking visits by drug reps to doctors, lubricated by light lunches and an unceasing flow of knick knacks, is not a matter often raised by doctors with their patients, or by patients themselves.

Yes, most of us patients will have noticed the pens, stationery and organ maps with drug company brands that litter many a doctor’s rooms. And many patients will also have received free drugs as part of clinical trials or from their doctor, free samples of a new drug, sometimes referred to as “starter packs”.

But the decision by doctors all over Australia to sign the new No Advertising Please pledge gives voice to the little-discussed issue between doctors and patients: are these perks good for patient treatment?

The answer is often “no” according to a variety of studies in Australia and abroad.

The NAP group sponsoring the campaign cites research findings that doctors receiving information from pharmaceutical companies – including from drug rep visits – is associated with increases in prescriptions of promoted drugs, decreased quality of prescribing and increased costs.[i]

They also cite research that drug reps make inaccurate claims favourable to their drug, but made accurate and non-favourable claims about their competitors’ drugs.[ii] Most doctors could not recall any false statements from these interactions.

In a study of Australian GPs from 2010, only around half of presentations from sales representatives included information about side effects, drug interactions and contraindications.[iii]

Similarly in a 2013 study in France, Canada and the US, harms were mentioned in fewer than half of encounters with pharmaceutical sales representatives, and this included drugs with known serious side effects and black box warnings.[iv]

So given the weight of evidence that pharma perks may be a negative for your treatment, is it not reasonable to ask your doctors whether they accept calls by drug reps?

The NAP campaign injects an exhilarating transparency into relations between doctor and patient. Seeing a NAP poster at the doctor’s rooms will reassure patients that their doctor seeks to act in their best interests.

What of those doctors who don’t sign on to NAP?  Some AMA leaders have scorned the NAP campaign suggesting it infantilises doctors, that it is not necessary and that indeed the drug rep calls are a benefit for the patient too.

But what of the mounting evidence that suggests otherwise?

CHF has argued for more rigour on the disclosure of drug reps visits and perks.  That is not because CHF believes any significant number of doctors purposefully prescribe in line with perks received.

The bigger concern CHF has is that routine drug rep visits, made amenable by the provision of free light lunches, will be likely to have the slow-drip effect on doctors’ prescribing behaviour.

A disturbing aspect of the drugs perks issue has been the apparent reluctance of the medical establishment to come clean.  CHF has proposed that if leading doctors are to continue to receive significant perks then these at least be declared by the individual recipient, or if not, withdrawn by the drug company.  This proposal was not accepted.

There is a telling survey, which found that while most doctors don’t believe they personally are influenced by such visits, many believe that other doctors are.

And what of the view of patients, who are the ultimate beneficiaries or casualties of the medicine prescribed?

CHF advocates for consumers to be active partners in health care.  Studies show that a well-informed and engaged patient can bring significant improvements in treatment outcomes.

Whether individual patients should ask their doctors about their acceptance of pharmaceutical perks and promotions will of course be a matter for individual decision.

Many patients will think twice, not wanting to challenge the integrity of a doctor they trust and respect.

But asking your doctor such questions is reasonable and rational.

Doctors offended by such questions might ask themselves whether their response is not only anachronistic, but may tempt their patients to think the patients interests are not being put first.

• Adam Stankevicius is CEO of the Consumers Health Forum

***
• Declaration from Croakey: Melissa Sweet was informally involved in an email network that contributed to the campaign’s development.

PrevPreviousPrivate health insurance in primary health care – what do the experts think?
NextHealthcare may be about to get (even more) expensive for patientsNext