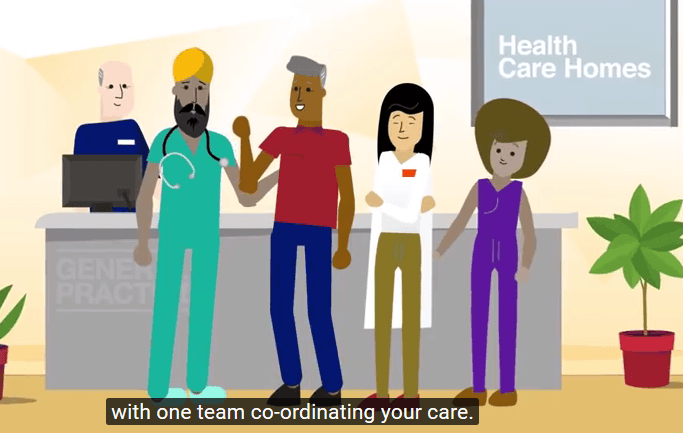 The Federal Government’s Health Care Homes program was hailed by the Prime Minister as one of the greatest health system reforms since the introduction of Medicare.

But in Senate Estimates on Tuesday, Rural Health Minister Bridget McKenzie could not have been more equivocal about the new model of care for chronic disease which was only launched last year.

The program has lost a lot of its early support, particularly from medical groups, but others want to make sure its team-based care approach is not lost and that all stakeholders, including consumers and nurses, are at the table when it’s under review.

Consumer and nursing groups are calling on the Federal Government to consult widely – and not only with doctors – on the future of the landmark Health Care Homes program that was promised to “revolutionise” chronic health care but now faces an uncertain future.

The Consumers Health Forum of Australia (CHF) and Australian Primary Health Care Nurses Association (APNA) also warned that any redesign of the Health Care Homes program, which has struggled to enrol patients and been roundly criticised by medical groups, should not shift away from the commitment to team based primary health care.

“It’s got to be all at the table in that discussion, because primary care is more than just about GPs,” CHF chief executive Leanne Wells told Croakey.

“Nurses, allied health groups, consumers and pharmacy all need to be at the table.”

It’s a timely warning, given that Health Minister Greg Hunt gave seven out of ten positions on his Ministerial Advisory Committee on Out-of-Pocket Costs to representatives of medical groups and specialties and only one to a representative of a consumer group.

In the wake of this week’s Four Corners program on out of pocket costs, the Australian Health and Hospitals Association (AHA) said the government would benefit from including more consumer and patient organisations on its review committees if they want to know first-hand the impacts the current system is having on ordinary Australians.

‘The current out-of-pocket costs review committee is totally dominated by doctor organisations, private health providers and private health insurers—the very people who benefit most from leaving the system as it currently is,” it said.

Health Care Homes was launched last year as a new model of care for people living with two or more chronic health conditions, to reduce preventable hospitalisations and fragmented care – many see up to five different GPs a year and also need services from specialists, nurses, pharmacists, physiotherapists, psychologists and dieticians.

Under the model, general practices develop a tailored care plan for each enrolled patient and coordinate all their treatment needs. Instead of traditional fee-for-service Medicare payments, practices receive a combination of upfront grants and so-called ‘bundled’ payments to cover care by teams that usually cannot be billed under Medicare.

It was enthusiastically embraced across the health sector when the concept was first developed, but support began to collapse, particularly among key doctors groups, when funding levels and other implementation details were announced.

As a result, the uptake by patients and practices has been disappointing.

The first staged rollout of Health Care Homes, which began late last year, was intended to involve up to 200 general practices, including Aboriginal community controlled health organisations (ACCHOs), and to enrol up to 65,000 patients by the end of 2019.

Senior Health Department executive Janet Quigley, chair of the Health Care Homes evaluation working group, told the recent APNA #Nurseforce conference that, as at May 8, only 1,679 patients had been enrolled, with 175 practices participating.

“Not a failure, but not biggest priority”

On Tuesday in Senate Estimates, Rural Health Minister Bridget McKenzie would not be drawn by Labor to declare the beleaguered program a failure, saying it was set up as a trial.

But she declined repeatedly to endorse Prime Minister Malcolm Turnbull’s early announcement of Health Care Homes as one of the biggest health system reforms since Medicare 30 years ago.

Last week, in a speech to doctors at the Australian Medical Association (AM) annual conference, Health Minister Greg Hunt gave a heads up that the program was under review, less than half way through its planned initial two year first rollout stage.

He said the government was in talks about it with the AMA and Royal Australian College of GPs (RACGP), as well as with  Professor Bruce Robinson, who is heading the Medicare Benefits Schedule (MBS) Review Taskforce.

Hunt gave few details, but said discussions were on the “lessons” from Health Care Homes “and advancing that to have an additional focus on a quality structure, on an opt-in basis”.

Shift in concept be “incredibly disappointing”

Former AMA president Dr Steve Hambleton, lead architect of the Health Care Homes concept, recently  admitted that “implementation went wrong somewhere” and that “the initial enthusiasm for what was promised has been lost”. See this excellent backgrounder from the Parliamentary Library.

Criticisms of the rollout include – as Professor Lesley Russell wrote for Croakey –  that “it is underfunded, payment mechanisms are inappropriate, the time frames for evaluation are too short, essentially only one model is being trialled, there is a lack of consumer consultation, and many are nervous about the involvement of the private sector.”

Preliminary research was also presented to the APNA conference that Health Care Homes could better use the health workforce, particularly practice nurses, in more effective chronic care. It found that challenges to reform would include medical dominance of the health care system, lack of education/training for nurses, and the need for cultural and operational change in general practices. (See tweets at the bottom of this post)

APNA President Karen Booth said it would be wrong to give up so early on a model that has worked well in the US and New Zealand.

“It would be incredibly disappointing for all the people who have put so much time in to created a better, more cohesive, comprehensive model of care if it just went back now to a discussion about higher payments to GPs rather than better systems for managing complex conditions,” she said.

Booth said primary health care nurses would be “heartbroken” if preliminary problems produced a shift from a model that could allow them to work to their full scope of practice through “truly team-based, multidisciplinary care”.

Booth and Wells were both members of the Primary Health Care Advisory Group (PHCAG), headed by Hambleton, which developed the Health Care Homes model.

At the APNA conference, Quigley outlined some “lessons to date” from the early days of Health Care Homes that included:

Quigley said the department had deliberately chosen general practices at varying points of capacity “so can see what the implications of this model are and what that might mean for us if we were to roll it out further”.

The bundled payment for practices had raised “some interesting tax questions”, with concerns, that she said were later resolved, that it would change the relationship between the contractor and the employer.

There were also “teething problems” with a new risk stratification tool, used to work out which patients were eligible for the model and at what level of payment, she said. “Clearly that’s something we need to test and validate through the course of the trial and refine as we go,” she said.

Varying data quality in primary health care was also an issue, she said.

Describing the target of 65,000 patients for the trial as “ambitious”, Quigley said it would “take time” to get there as “lots of time needs to be spent with patients” so they can understand the model, its benefits and what it means to be involved.

“This is incredibly important,” she said. “We’re seeing that the practices who have had that have been really able to take this model forward. Others are really trying to build that engagement within their practices…”

At Senate Estimates on Tuesday, Caroline Edwards, the Deputy Secretary of Health Systems Policy and Primary Care Group, conceded that patient takeup so far had been “lower than we hoped for” and needed to be lifted for the sake of robust evaluation.

But she defended the process, given its ambitions.

“Making real changes and reforms in this space means we have to try new things and that’s what we’re doing and we’re learning from it as we go,” she said.

Pressed by Labor Senator Lisa Singh on whether Hunt’s comments indicated the government was “walking away” from Health Care Homes, Edwards said:

“I’m not aware of any change. We’re looking at ways we can help our support of practices to increase the patient numbers. As far as I’m aware, the trial is continuing, will be evaluated in due course and we’ll take learnings from it.”

Edwards and Quigley were also grilled by Greens Leader Richard Di Natale about why the evaluation would not measure whether patient outcomes improved.

“How will you know if it works?” he asked.

They said the trial period was short, did not have a control group, and was “disease agnostic” so it wasn’t possible to measure outcomes for patients. Instead it would focus on implementation – ” what impact it will have on the type of care patients get”.

To date, they said, nearly $30 million has been spent on the rollout: $7.8 million in 2016-17 and $21.6 million in 2017-18, on a range of clinical services and infrastructure supports such as the risk stratification tool, education guidance, and funding to Primary Health Networks.

A Health Department spokeswoman told Croakey over $110 million has been provided for the two year implementation program.

Wells said  it was clear with hindsight that the program design was “a bit too rigid”, with not enough flexibility for practices to implement a model that was “fit for purpose” and so they could sustainably employ allied health providers or bring in non-dispensing pharmacists.

As a result it had been a “disappointing implementation”.

“You could say that’s symptomatic of the change needed to get something like this embedded at a critical mass point but I think it’s more symptomatic that there could have been a different approach to implementation,” she said.

“I think it would have been better if there had been some broader national guidance: such as ‘these are the sorts of outcomes we are looking for, here are some KPIs and an accountability framework, here’s the sort of patient experience we’re looking for, here’s some money to invest in change management, here’s the funding model to support it.

“I’m not advocating necessarily for a ‘let a thousand flowers bloom’ approach but I do think a little more flexibility (to determine) what are the best features, the best enablers, the no go zones and then draw on those learnings.”

Wells said she was still hopeful the model would be retained and that the Minister was not set to ‘throw the baby out with the bathwater’, but she said it would be “retrograde” if he settled for just paying GPs a higher fee for service for complex cases.

She was not worried that he did not intend to wait for the evaluation, due in early 2019, before making changes, “as long as consumer advisors are at the table and part of that discussion early in the policy cycle”. 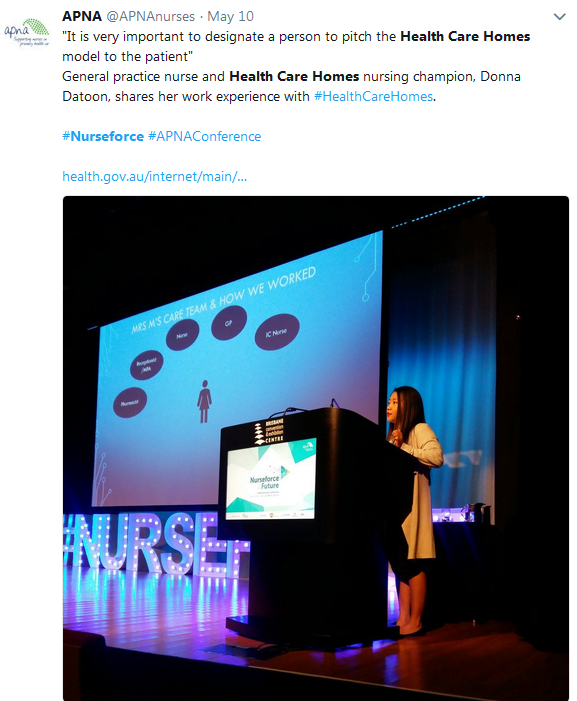 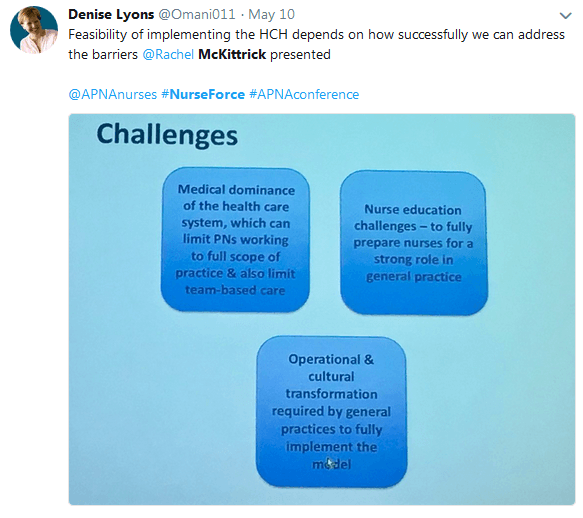 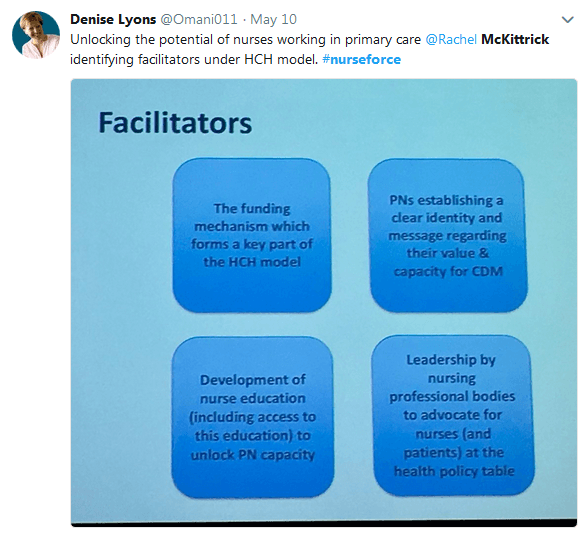 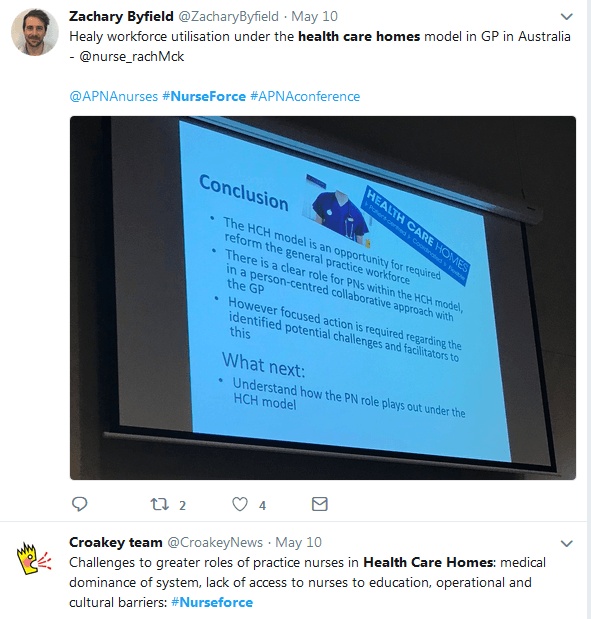 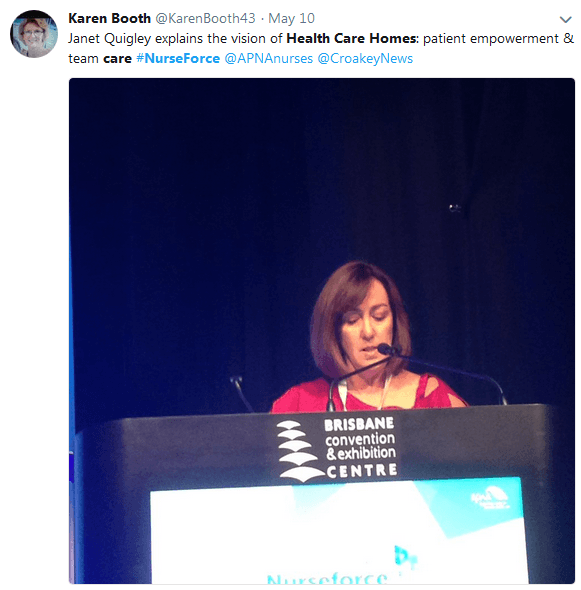 According to Symplur analytics, during the period of Croakey’s coverage of the conference, there were almost 12 million Twitter impressions using the #Nurseforce hashtag, and 370 participants on Twitter using the hashtag. Read the Twitter transcript here.

PrevPreviousIs it time for a plebiscite on abortion in Australia?
NextAnnouncing IHMayDay18 program – and a shout out from Palm Island MayorNext