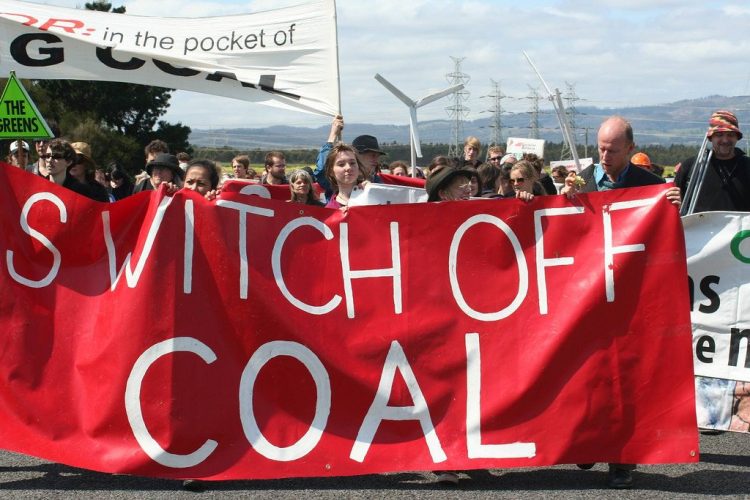 Fossil fuels are not only bad for the planet, they’re a prescription for poor health, contributing to pollution, climate change, environmental degradation and a raft of problems ranging from respiratory and heart disease to cancer.

Earlier this year, private health insurer HCF divested from fossil fuels in an Australia-first move, and others have been urged to follow suit.

Incredible, then, that a major hospital would allow its logo to be used in a campaign seeking the extension of a massive coal mine in northern Australia.

In a piece for Croakey readers, Dr David King and Professor Peter Brooks from Doctors for the Environment Australia explore how such a troubling situation has been permitted to arise.

Coal is the new tobacco in terms of the harms it has on our health.

No hospital would think of lending its logo to support the marketing of cigarettes or allowing any of its key decision makers to have strong links to cigarette companies.

Yet, such an extraordinary situation has arisen around the Mater Hospital in Brisbane.

The Mater, a significant provider of both public and private health care, recently put its name, logo and possibly its reputation on an advertising campaign for a major coal mining company. After a reaction against this by a number of individuals and health groups, the Mater withdrew support for the offending advertisement late last week.

So why did a hospital support a coal mine and mine extension?

Could it be that three members of the Board—including the chairman and the deputy chair– are deeply involved in coal mines, despite coal’s toxic impacts on the health of our community?

The aim of the advertising campaign by ‘Friends of New Acland’ is apparently to pressure the Queensland Government to approve the stage 3 extension of its New Acland mine, despite warnings from doctors and the recent ruling by the Queensland Land Court recommending a rejection.

The outcome of the marathon Land Court trial was that long term human and environmental health concerns, in support of sustainable agricultural production, should outweigh short term profits of a mine extension.

The Court also noted concerns with health impacts from the current stage 2 and recommended tighter conditions on dust and noise than those initially proposed by the Queensland environment department. The state government was also found to be complicit in lax compliance monitoring of air quality emissions, which were quite possible to have exceeded licensed levels.

The hospital management in a news story last week and in their response to correspondence from concerned members of the public, justified supporting the New Acland mine extension to ensure continuation of coal supply for its coal-fired boiler (whose chimney is within a hospital campus and a densely populated urban area).

They then justified using coal to run the boiler because coal was a cheap fuel and the hospital couldn’t afford to replace the boiler.

It is entirely inappropriate that a healthcare organisation continues to burn coal without apparently any plan to rapidly phase it out and replace it by less polluting fuels. Furthermore, when all the external costs to health and the environment are factored in, coal is no longer a cheap source of energy. The costs to health from coal burning related to air pollution in Australia are estimated to be $2.6 billion a year.

Calls for a review

Given the Mater’s role as a health provider, its support of coal is a clear conflict of interest. While the Mater’s decision to withdraw its logo from an advertising campaign promoting coal is a welcome step, it must do more.

An independent review into this hospital‘s support of coal should be a high priority for owners Mercy Partners who have made such a contribution to health care in Brisbane over the years.

This inquiry should look into the Mater’s decision to support the New Acland advertising campaign and into the hospital’s links to the coal industry, including any donations.  It should recommend that the hospital’s board members cut all financial ties to the fossil fuel industry, or resign from the board if they’re not willing to do so.

Health organisations in Europe and the US are leading the way with divesting from fossil fuels, in addition to supporting more sustainable health care.

This is in keeping with the great traditions for health care that the Mater Hospital Group has become known for. Over the past few years it has been a leading exemplar in sustainability and greener practices, including winning the Global Green and Healthy Hospitals – 2020 award for Climate Resiliency Greenhouse gas reduction, and the Premier’s 2016 award for a sustainable business.

The hospital’s support for coal is not only inconsistent with these achievements, but as a healthcare provider it is also unconscionable.

Coal is associated with heart disease, stroke, respiratory disease and lung cancer, and more recently a resurgence of black lung disease among miners. Coal is also the largest source of greenhouse gases that lead to climate change—the biggest health threat this century.

Children, as well as the poor and disadvantaged, who contribute the least to emissions, are impacted the most, so climate change is also an ethical challenge.

Eighty per cent of known coal reserves must remain in the ground in order to hold global warming to less than 2 degrees.

Even Pope Francis understood this carbon budget when writing his ‘Laudato Si ‘ – Para 165: “We know that technology based on the use of highly polluting fossil fuels – especially coal but also oil and to a lesser degree gas – needs to be progressively replaced without delay”.

Can the Mater ignore both its spiritual leader and the now indisputable scientific evidence that coal is a hazard both to people and planet? We think not.

Professor Peter Brooks was on the Board of the Mater Medical Research Institute when he was Executive Dean of Health Sciences at the University of Queensland in the early 2000s. He is currently a Professorial Fellow at the Centre for Health Policy- School of Population and Global Health University of Melbourne.

David King is a Brisbane GP, a senior lecturer with the Discipline of General Practice, University of Queensland and works part-time at the Mater Hospital.

Both are members of Doctors for the Environment Australia