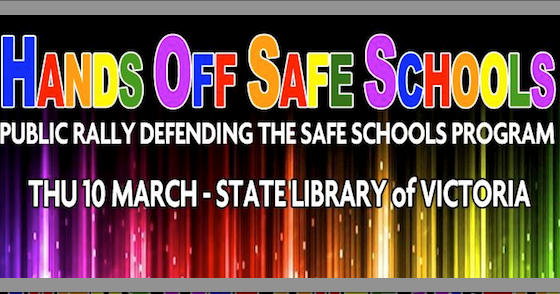 Initial results of the independent review suggest that the Safe Schools Coalition is here to stay. However, conservative MPs have already called for further investigation, including a petition to cut the program’s funding. On the other hand, Victorian Premier Daniel Andrews guaranteed state funding regardless of federal outcome.

In light of such polarised extremes, medical student, writer and advocate Asiel Adan Sanchez, argues that this program should be seen as a public health initiative, promoting the mental health and well-being of young people.

In case you’ve missed the collective angst of both conservatives and the LGBTIQ community, the Safe Schools Coalition is a growing initiative that seeks to provide a safe and inclusive environment for LGBTIQ youth in Australian schools. The program arose out of requests from the schools themselves, who often felt ill-equipped and ill-prepared to meet the needs of these young people. With 530 schools signed up across Australia, it is clear that it is an invaluable resource for teachers and students alike.

When it comes to public health, we know that young LGBTIQ people face a disproportionate amount of mental health problems compared to their heterosexual peers. We’ve known this for a while. These are not exaggerated claims or emotive rhetoric; these are facts.

Various studies from both Australia and abroad have consistently shown that same-sex attracted and gender questioning youth are one of the most vulnerable groups in our community. LGBTIQ youth face higher levels of isolation, homelessness, domestic violence, depression, anxiety, suicide, substance abuse and school or job failure than their heterosexual peers (1-3). For all its resilience, this is a community facing some very serious disadvantages.

The role of schools

We also know schools are a major part of the problem. We know this not from one, but three different in-depth reports on the health of young LGBTIQ people in Australia. The often quoted findings from Writing Themselves In 3 state that 75% of young LGBT people have experienced bullying, with 80% of that abuse occurring in schools. It is not surprising that the Growing Up Queer report found only 46% of these young people felt safe at school.

Worryingly, the From Blues to Rainbows report by Beyond Blue established that trans and gender diverse young people who had experienced harassment, discrimination or abuse at school were twice as likely to suffer from Post-Traumatic Stress Disorder than those who did not. These numbers establish a clear link between discrimination at school and serious mental health problems for young LGBTIQ people.

Prevention is the key

It’s much easier to prevent disease than to rectify it. The whole of preventative medicine is centred around this idea and nowhere is it more important than in mental health. Young Australians are hit the hardest, with 27% of 18-24 year olds reporting at least one mental health disorder.

The consequences are often chronic. Mental illness has been estimated to be the leading cause of years lost to disability in Australia, with depression having the highest non-fatal disease burden. By reducing negative experiences at school, Safe Schools would prevent poor mental health outcomes in the long run and reduce long-term consequences.

The current attack on the Safe Schools program translates to an attack on the mental health and well-being of LGBTIQ young people, whether we want to or not. Exposure to transphobia and homophobia perpetuated by conservative politics contributes to the mental health problems described above, regardless of opinion to the contrary.

There’s already been reports of increased use of mental health services by LGBTIQ people following the flurry of homophobic and transphobic rhetoric in the media. Defunding the program would only make matters worse.

The negative impact of de-funding

Health professionals have already begun to voice their concerns about the potential impact of defunding the program. Dr Maithri Goonetilleke -known for his humanitarian work in Swazilan, South Africa- established a petition for health professionals which outlines the health implications of the Safe Schools Coalition.

Asiel Adan Sanchez is a medical student, writer and advocate.

PrevPreviousAnd here are some other gaps worth discussing, on the 10th anniversary of the community-driven Close the Gap campaign
NextArt project puts a powerful spotlight on Aboriginal deaths in custodyNext