Photo tweeted by the Refugee Council of Australia (@OzRefugeeCounc), with the caption: Our beautiful community gathering on the lawn of @ParliamentHouse to call on the Federal government to support a #RoofOverMyHead for people seeking asylum #auspol

Her call to action – which comes as #RefugeeWeek is marked across Australia from 17-23 June, with the hashtag #WithRefugees – has attracted more than 1,250 signatures so far.

Townend said she was “totally incensed by the lack of humanity on display” by the Australian Government after reading reports in Guardian Australia about the plight of the 63-year-old refugee who is being held on Nauru.

Ali (not his real name) is a member of the persecuted Hazara minority in Afghanistan and has been formally recognised as a refugee. However, he is deemed to have “refused treatment” because he declined to be moved to Taiwan to die.

A GP with a caseload of both adult and paediatric palliative care, Townend writes:

If he goes to Taiwan, where there are no Hazara, he will die isolated and without community. This is no way to die.

If he remains on Nauru, he faces a potentially catastrophic death, without medical expertise to ease his pain and symptoms. This is no way to die.

His only chance of a good death is to come to Australia so that he can have both community and medical expertise.

Read her powerful letter to the Minister in full below: doctors can click here to add your voice to the petition which will close at midnight tonight (Monday).

Meanwhile there are grave fears for the welfare of asylum seekers living in the community in Australia and still waiting for decisions on their refugee claims, following changes to the Status Resolution Support Service program which provides them with a basic safety net of support.

Ten national NGOs, including the Refugee Council of Australia and Australian Council for Social Service (ACOSS) today warned that more than 13,000 people nationally, including families with children, are at risk of losing all income support and access to torture and trauma counselling.

The Refugee Council has launched the #RoofOverMyHead campaign, warning that since August 2017, the government has been forcing people seeking asylum into destitution in an act of “calculated cruelty”. Read more here: ‘I didn’t know how to survive’: the refugees and asylum seekers hit by Coalition cuts

(See this link for Refugee Week events across Australia, including the first ever Refugee Film Festival this week with screenings in Sydney (State Library of NSW) and Melbourne (Cinema Nova).

Croakey readers may also be interested in new research published by Doctors of the World UK today has found that 1 in 5 attempts to register vulnerable patients are being wrongfully refused by GP surgeries in England, despite being fully entitled to access National Health Service (NHS) primary care.

It said that pregnant women, children, homeless people, survivors of torture and trafficking and people who have fled war are among those who have been wrongly turned away.

I wrote this letter in response to the article in The Guardian newspaper.  I was totally incensed by the lack of humanity on display by our government, and want to call them to account.  I don’t have formal affiliation with any particular lobby or advocacy group.  I’m a regular GP, with a caseload in both adult and paediatric palliative care in Sydney.  If you are a concerned fellow doctor, and would like to sign the letter, please add your name and qualifications.

The original deadline for lodging this letter was tonight (Sunday night, June 16).  I have decided to extend it by 24 hours until midnight on Monday, June 18.  This will allow as many doctors as possible to sign.  Thank you so much to those who already have.

Please direct any questions to me at drsaraemail@gmail.com

To Peter Dutton and the Department of Home Affairs,

We are writing to ask that you bring the refugee with terminal lung cancer to Australia for palliative care.  We write in response to the articles published in The Guardian newspaper on May 24 and June 11, 2018.

Australia has accepted this man as a legitimate refugee. This means Australia is obligated by International Conventions to care for his physical and mental health, whether he is on the mainland, or off shore.  Australia is a signatory of the UN Universal Declaration of Human Rights, which states that this man should not be subject to inhuman treatment (Article 5), and the International Convention on Economic, Social and Cultural Rights (ICESCR) which speaks directly about equitable health care, including palliative care.

Nauru is not an appropriate place for this man to die. The Australian Border Force tacitly acknowledged this by offering to transfer him to Taiwan for palliative care.  He requires expertise beyond what is available on Nauru.

So, why would a man refuse a transfer from Nauru?

Why would he risk a death where he might suffer severe, untreated physical pain?

And why would we ask you to commit to bringing him to Australia?

The answer is found in what we as doctors see every day.   We and our teams have the privilege of being in the presence of people who are dying.  We see their families rush from great distances to say goodbye. We hear them sing songs and cry their goodbyes.  We’ve rushed to our own family and friends’ sides to do the same. At the end of life, language, connection with our people and memory are what is left. This is what defines us as humans.

If he goes to Taiwan, where there are no Hazara, he will die isolated and without community.  This is no way to die.

If he remains on Nauru, he faces a potentially catastrophic death, without medical expertise to ease his pain and symptoms.  This is no way to die.

His only chance of a good death is to come to Australia so that he can have both community and medical expertise.

Please commit to bringing him to Australia.

Our international reputation depends on it.  Our humanity demands it. 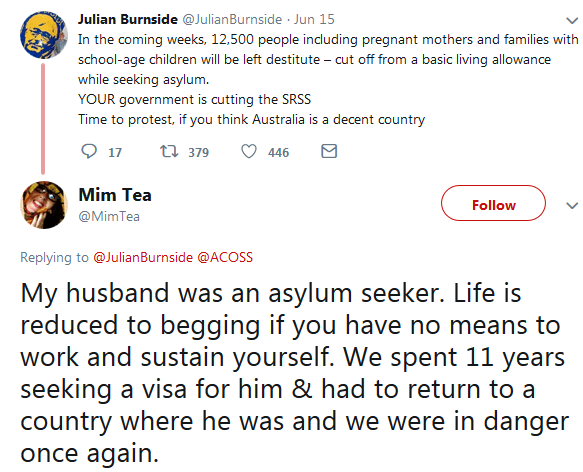 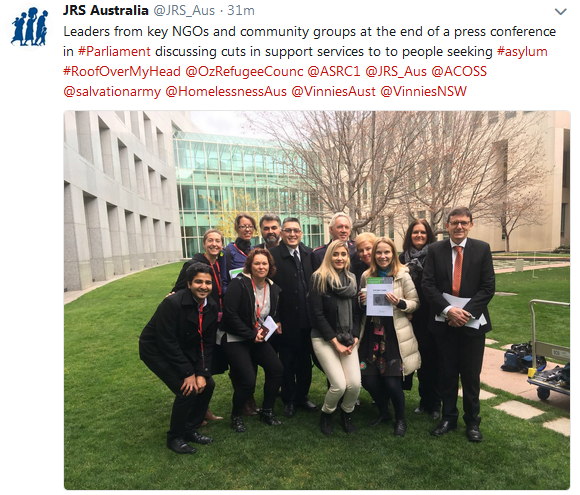