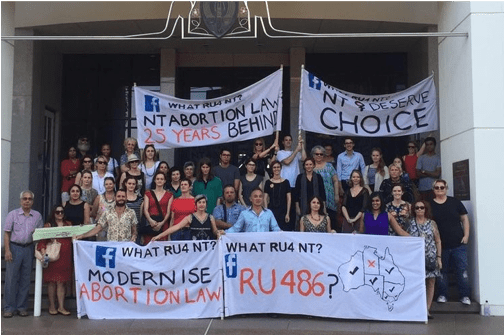 Does reforming abortion law make a difference to health practice? One year after in the Northern Territory

Abortion legislation around the nation is inconsistent and out of date. But advocates of change have wondered – should they push for legislative reform? Or might challenging the status quo making things worse? Suzanne Belton outlines the positive changes after law reform in the Northern Territory.

In 2017 the Northern Territory passed a bill decriminalising abortion up to 24 weeks’ gestation, removing the requirement of parental approval for abortions in teenagers and including the provision for health providers to supply abortion medications for early medical abortion. It replaced a piece of legislation that was over 40 years old, but has the reformed legislation made any difference to women’s health?

Women and doctors have switched to early medical abortion in general medical practices, health clinics and home settings. Small numbers of women are also using safe and effective telehealth abortion services. However, women seeking termination services in rural and remote areas face barriers including finding a doctor, stigma, financial costs, and lack of privacy. These are issues of health policy and not legislation.

Previously patients and staff at one public hospital experienced harassment where anti-abortion picketers stood with posters of fetal images and religious icons at the entrance. Since the Termination of Pregnancy Law Reform Act 2017placed a legislated safe access zone around the hospital, the harassment, intimidation, obstruction and invasion of privacy of women and health staff moved much further down the street.

This type of behaviour which some name ‘protesting’ has not occurred in other public places where it is legal, and this really shows the purpose. If it were about free speech, then the behaviour would happen outside of parliament, the shopping mall or perhaps at the footy. It reveals that this behaviour is done to bully vulnerable women.

A study in the UK analysed ‘protesting’ outside health clinics and notions of freedom of speech, and found that it intimidates, angers and incites fear in patients, deliberately tries to hinder access to reproductive health services, and further stigmatises abortion, even if unintended and in the form of silent praying.

Undoubtedly conscientious objection by health staff is still present in the Northern Territory.The Termination of Pregnancy Law ReformAct 2017requires a health practitionerwhoholdsanti-abortionbeliefstopromptly refer their patient to another health practitioner who does not hold similar beliefs.Womenmaynotbeaware that they can ask for referrals, and if they are blocked, they can report the health practitioner to Australian Health Practitioner Regulation Agency.

Current Northern Territory practice guidelines recommend that women are within two hours’ drive of emergency gynaecological care if they are prescribed abortion medications, so the need to travel to health services remains for women living in remoter areas.

Patients who need to travel for health service are assisted through a government-subsidised service. There have been no recorded adverse health incidents for Indigenous or non-Indigenous patients since the passage of legislation, despite the Australian Medical Association NT suggesting that women in remote areas would die if this legislation passed. This type of scaremongering by health professionals without any basis in evidence is concerning.

The Minister of Health has stated she will review the Termination of Pregnancy Law ReformAct 2017. Half of the 13th Legislative Assembly are women and they still have some work to do.It remains unclear why two doctors are needed to authorise an abortion after 14 weeks gestation. Mandating involvement of two doctors creates barriers to a patient exercising their choice over their body. This is not the case with any other health process, except when dealing with the very mentallyunwell.

The reformed legislation gives dubious regulatory powers of accreditation to a Chief Health Officer, which seems unnecessary bureaucratic red tape. Health staff are trained and use professional regulatory mechanisms to ensure safety and scope of practice. Furthermore, medications are controlled by prescription and are subject to evidence-based modes of use inAustralia.

At present doctors and pharmacists are credentialed by Marie Stopes, a private company. Medical standards, guidelines and credentialing should be set by professional bodies, not private companies, and the Colleges need to step up. Preferably this should be done by the colleges of general practitioners, and of nurses and midwives, with appropriate codes of practice.

Prohibiting abortions over 23 weeks need not be spelt out in legislation. Later terminations are rare, usually an emergency or due to fetal abnormality. The reformed law forces women in these difficult situations to carry a pregnancy to term or to travel to a health service interstate. Fixing gestation within legislation is unhelpful for health professionals who should rely on contemporary scientific evidence, peer review and practice guidelines in managing health care.

Risks in reform in women’s health

Despite concerns that raising this issue could make access to abortion health services worse, this has not eventuated. The reformed law has made a difference to abortion health services in the Northern Territory; it is an improvement for women and for health providers who are able to offer modern gynaecological care without fear of criminality or harassment. However, there is more scrutiny through accreditation processes of health professionals and health services wishing to prescribe or dispense mifepristone and misoprostol. There is a risk that surgical abortion will become a rare procedure, with health professionals possibly losing these skills with falling need being met by early medical abortion.

The Northern Territory has remained committed to the idea of abortion being provided free in the public health sector. This may be due to a Labor majority government, or the fact that with a small population, many of whom are financially disadvantaged, spread over thousands of kilometres, it is difficult to make a profit and exorbitant fees cannot be paid upfront.

Each jurisdiction needs to assess the potential benefits of law reform, but it is likely that if legislation is more than 25 years old, it is time for a spring clean.

Adjunct Associate Professor Suzanne Belton is an Honorary Fellow at the Menzies School of Health Research and Chairperson of Family Planning Welfare Association NT. This article was first published in InTouch, the newsletter of the Public Health Association of Australia. Republished with permission.