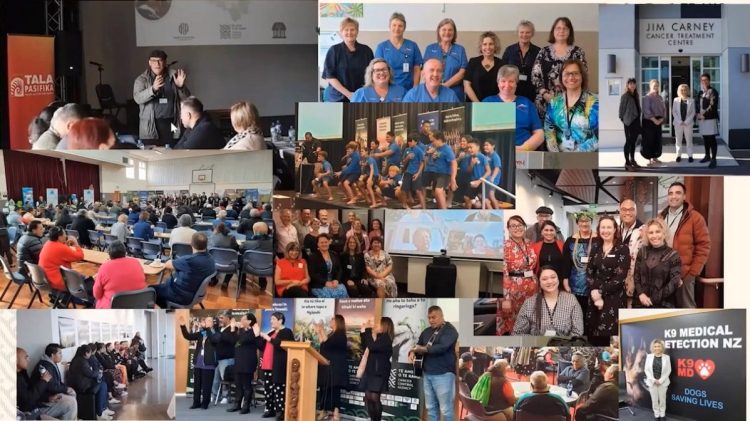 The wide-ranging scope of epidemiology was profiled at the recent World Congress of Epidemiology, with presentations on 4 September covering topics ranging from mental health to malaria, racism, social isolation and cancer control, as Jennifer Doggett reports below for the Croakey Conference News Service.

Her report also introduces a fascinating city-wide research project in the United Kingdom, Born in Bradford.

The many and diverse ways in which epidemiology in making a difference in health and healthcare around the globe was on display during presentations and posters at the World Congress of Epidemiology on 4 September.

Keynote and concurrent sessions highlighted how epidemiological research and practice is changing clinical practices and influencing health policies and programs at the individual and population level.

A key theme emerging from these presentations was the central role of data governance in epidemiological research and practice, and the need for epidemiologists to continually question who owns, collects, analyses and reports epidemiology data.

Abigail Echo-Hawk is the director of the Urban Indian Health Institute, one of 12 tribal epidemiology institutes across the USA, created to ensure American Indians and Alaskan Natives are included in epidemiological data.

She described the devastating consequences of “data genocide” where American Indian and Alaskan natives are often not included in population data, crucial to upholding their treaty rights.

She also highlighted the importance of including urban-based first nation’s people in epidemiological data as many people have moved from tribal lands to cities where they may be less visible to researchers and policy makers.

Echo-Hawk called on epidemiology practitioners to “walk through the truth” by recognising what has happened to Indigenous people through colonisation and acknowledging their own role in excluding indigenous people in their work.

She acknowledged that this can be uncomfortable but stressed that unless this occurs, epidemiology will simply uphold the status quo. 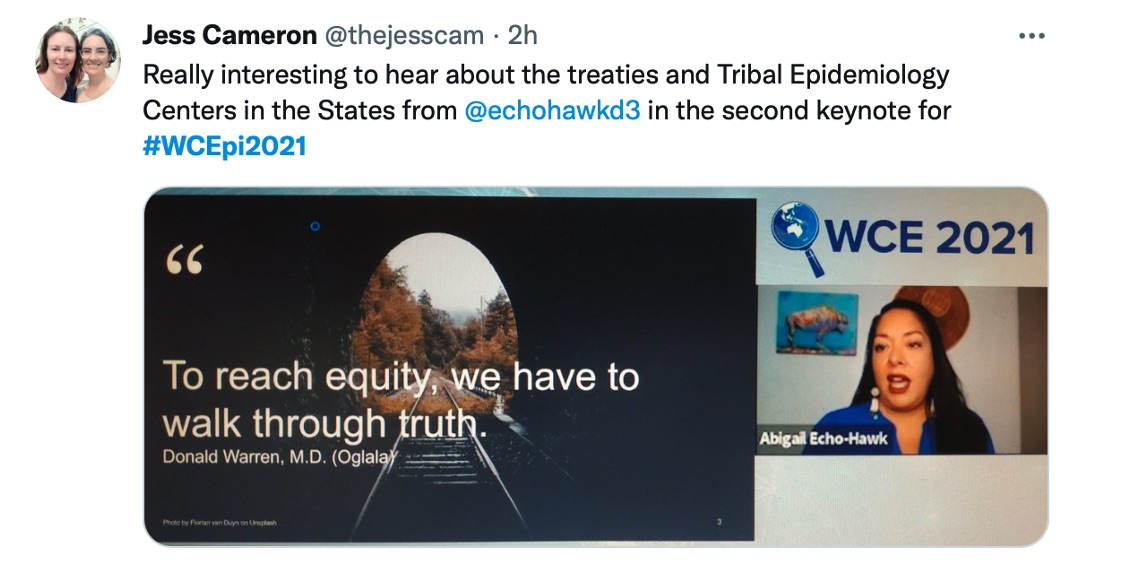 One example of institutional and structural racism within the health system identified by Echo-Hawk is the lack of laws which mandate the collection of data on race and ethnicity.

She described how her own child was misclassified at a hospital because there was no category within their data collection system for his ethnicity to be accurately recorded.

“It happens because people don’t ask or make assumption based on appearance or just don’t bother. We need better data collection practices so this no longer happens,” she said.

Echo-Hawk attributed this discriminatory approach in part to the lack of diversity in STEM fields, where less than 10 percent of the workforce are People of Colour and women. She recommended addressing educational disparities as one strategy to address these entrenched systems of inequity.

See a full Twitter wrap from the presentation at the end of our earlier report, ‘At a critical and high-profile time for epidemiology, what challenges are ahead?’

In the mental health session, two studies demonstrated how epidemiology can identify links between physical and mental health.

Huazhen Yang from Sichuan University examined whether cancer survivors who developed a second primary malignancy had an increased risk of suicide. She found that overall this was the case although there were differences across different types of cancer with people with prostate cancer at particularly high risk.

PhD Candidate, Prem Raj Shakya, used measures of inflammation to identify links between diet and the risk of adult depression symptoms. With around 18 percent of Australians experiencing mental health or substance use disorders, this research could have significant implications for prevention of depression.

Two presentations focussed on identifying the drivers of poor mental health of young people, a topic of particular interest in the current COVID environment.

The role of racial discrimination in youth mental health in Brazil was researched by Professor Fernando Feijó from the Federal University of Bahia.

His longitudinal analysis found that racism in Brazil, one of the most racially diverse and violent countries in the world, was associated with poorer mental health outcomes. He suggested that these findings supported the elimination of racism becoming a public policy priority. 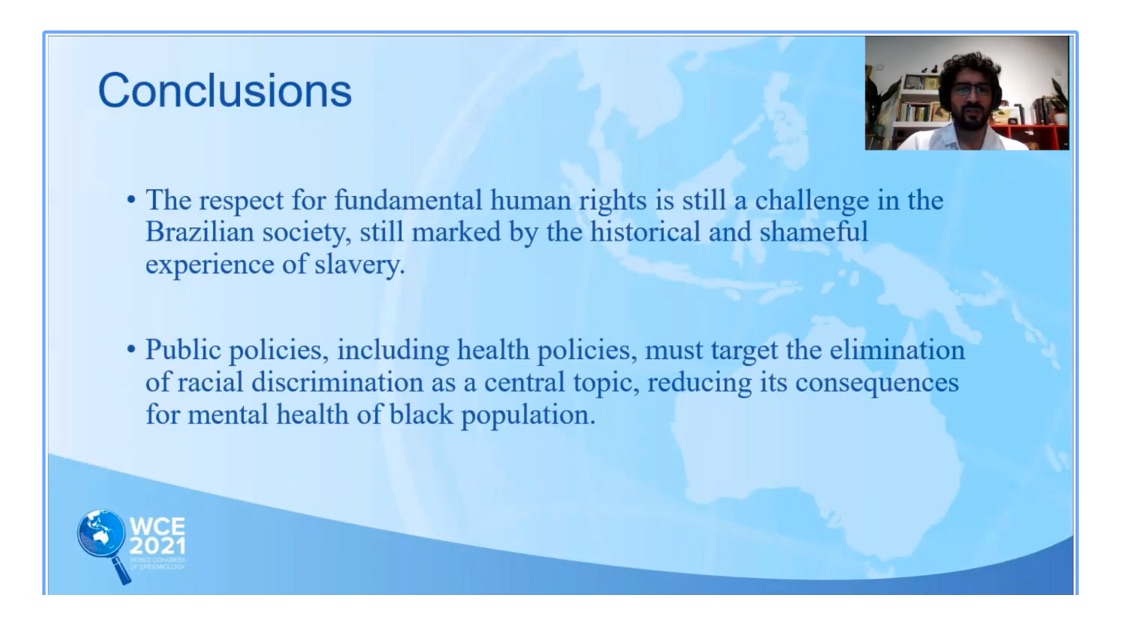 Dr Md Irteja Islam, from the University of Sydney, reported the findings of his mediational analysis of the relationship between bullying, mental disorders, suicidality and self-harm among Australian adolescents.

His study used data from the Young Minds Matter survey to establish that an experience of bullying increases the risk to young people of self-harm, suicide and mental health disorders. He also found that this risk was increased for young people with some specific diagnoses including ADHD.

With previous research finding that 70 percent of all young people experience some form of bullying, this research highlights the importance of bullying prevention strategies as one way to reduce the risk of poor mental health.

The mental health of young people was also the focus of a poster presentation by Dr Izabela Fedyszyn, from the Murdoch Childrens Research Institute. As part of the institute’s LifeCourse program Fedyszyn is examining self-harm behaviours in young people using longitudinal data in order to gain insight into how these behaviours develop over time.

Her study identified school engagement as a protective factor against self-harm and also stressed the importance of positive peer relationships.

At the other end of the age spectrum, Sujin Yum, from Korea University, used a range of techniques to analyse spatial clusters of Alzheimer’s disease death in South Korea.

She identified a number of factors influencing this distribution including local medical resources and long term care institutions and also identified gender differences.

Her takeout messages was the need to consider the provision of long term care services when implementing dementia management policies. 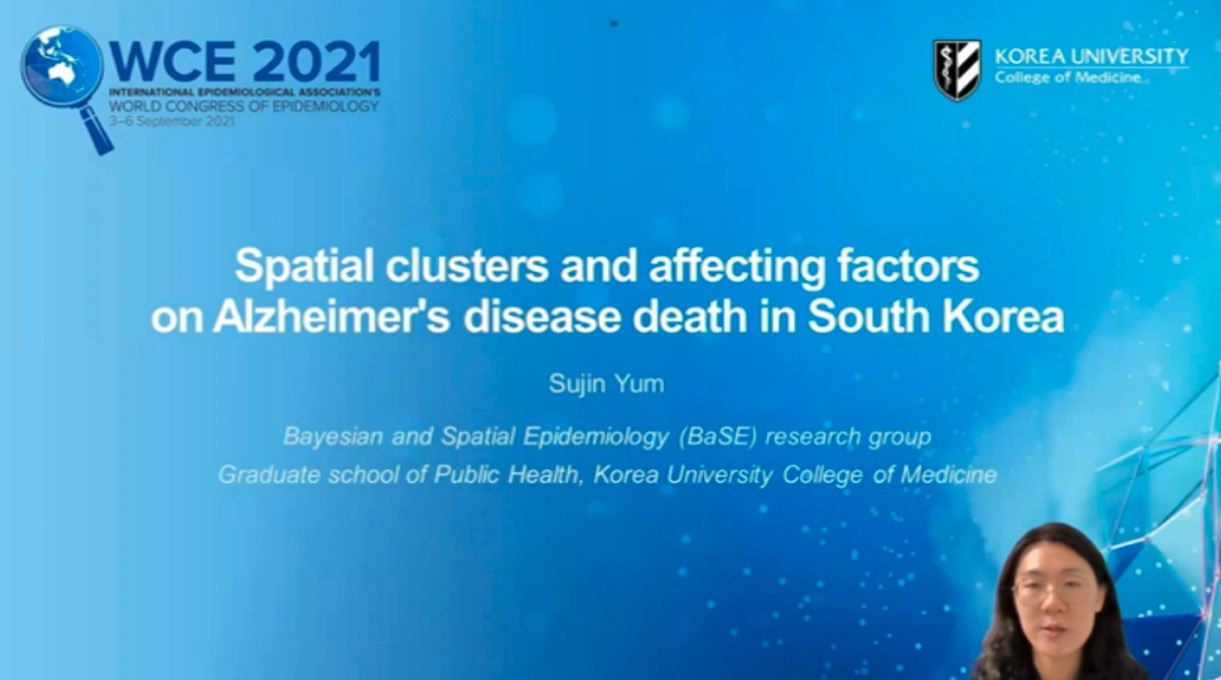 Cardiovascular disease is one of the major killers worldwide and this session highlighted the many ways in which epidemiology is contributing to prevention and treatment of this condition. 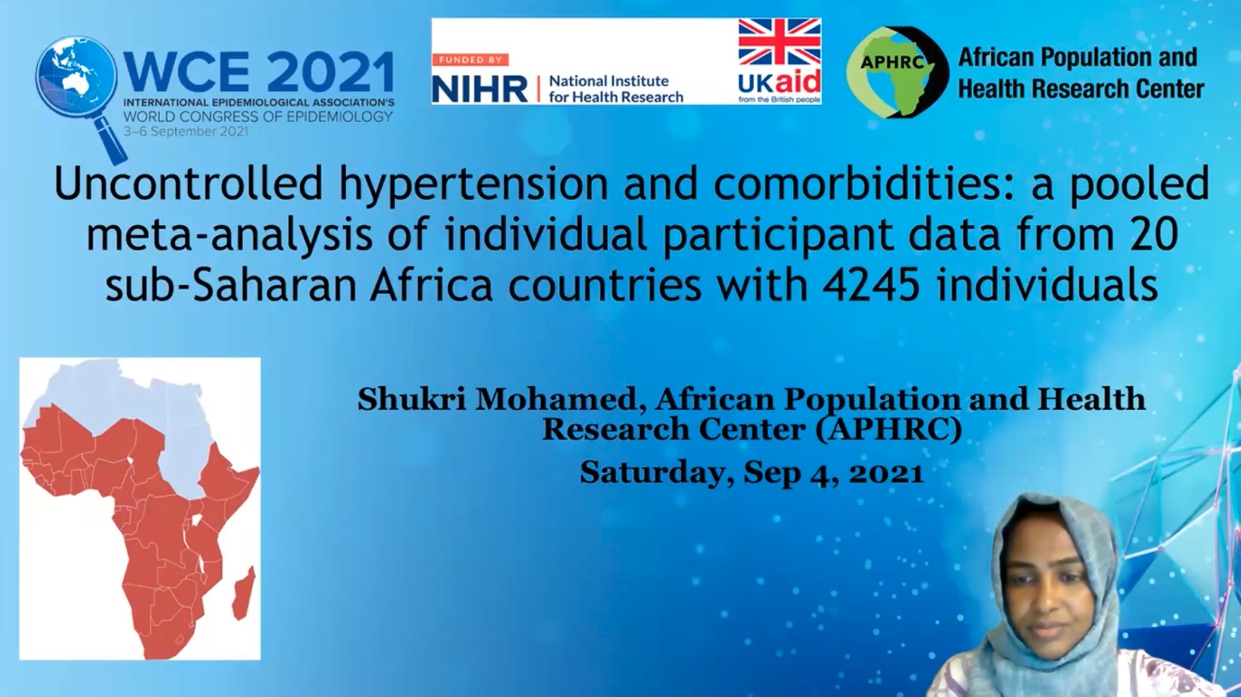 The impact of pregnancy on cardiovascular health was studied by Dr Gemma Clayton, from the University of Bristol. Her research found some links between pregnancy and increased BMI and fat mass but did not find any association with other signs of heart disease, suggesting a need for further research in this area. 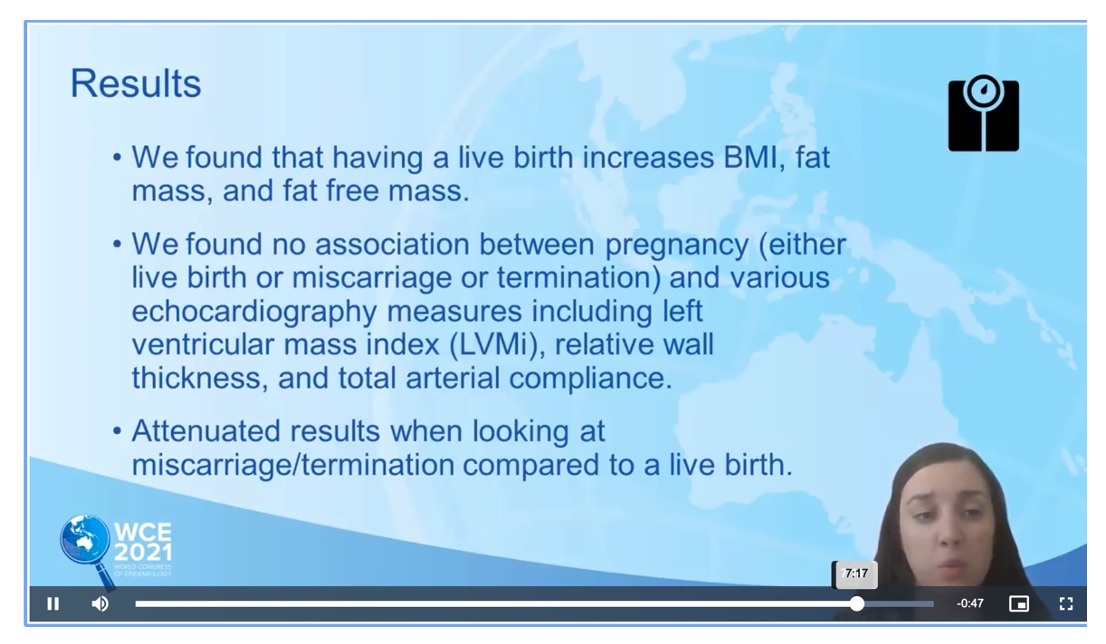 An Australian-based study from Dr Pierre Dugue at Monash University looked at the association of blood markers of inflammation, vitamin status and the kynurenine pathway with age and all-cause mortality.

This research addresses a gap in current understanding of the lifelong impacts of maternal smoking. 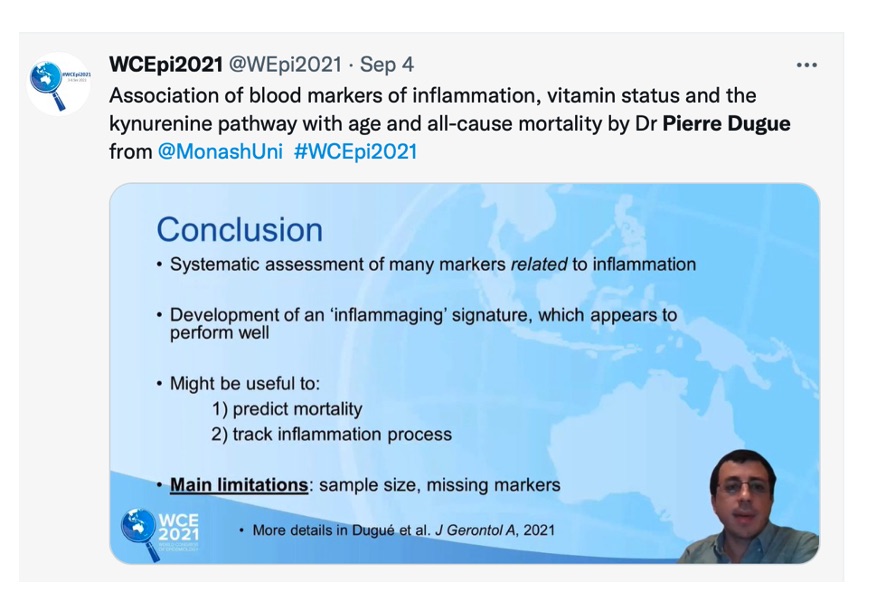 Dr Abbey Diaz from the Menzies School of Health Research presented her research into adverse cardiovascular events after cancer.

She found a higher rate of hospitalisation for cardiovascular events among people who had received cancer treatment in the past three years and identified men and those in older age groups as at particular risk. 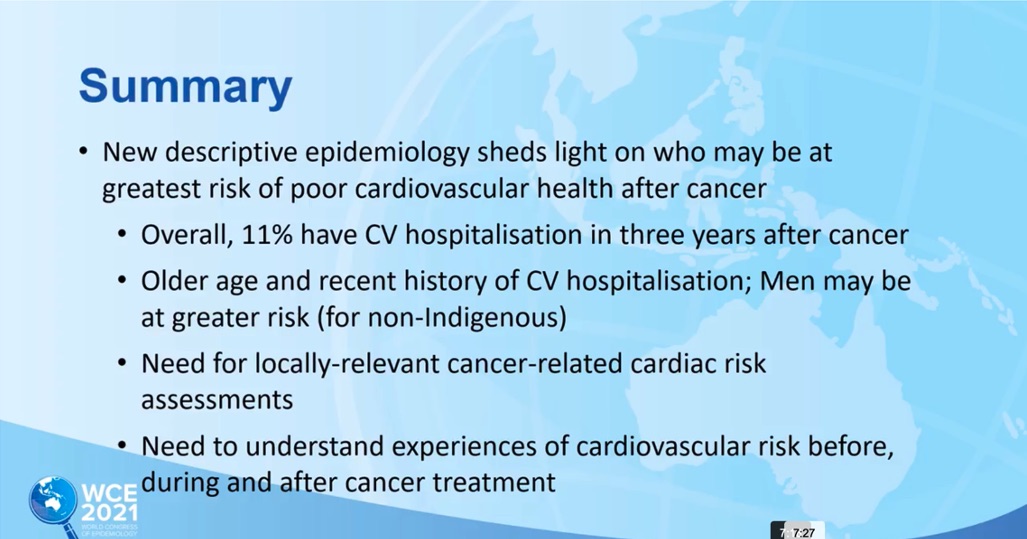 He found that people experiencing social isolation were not at greater risk of developing heart disease but were more likely to die of a cardiovascular event, probably due to the increased difficulty they had in accessing treatment. 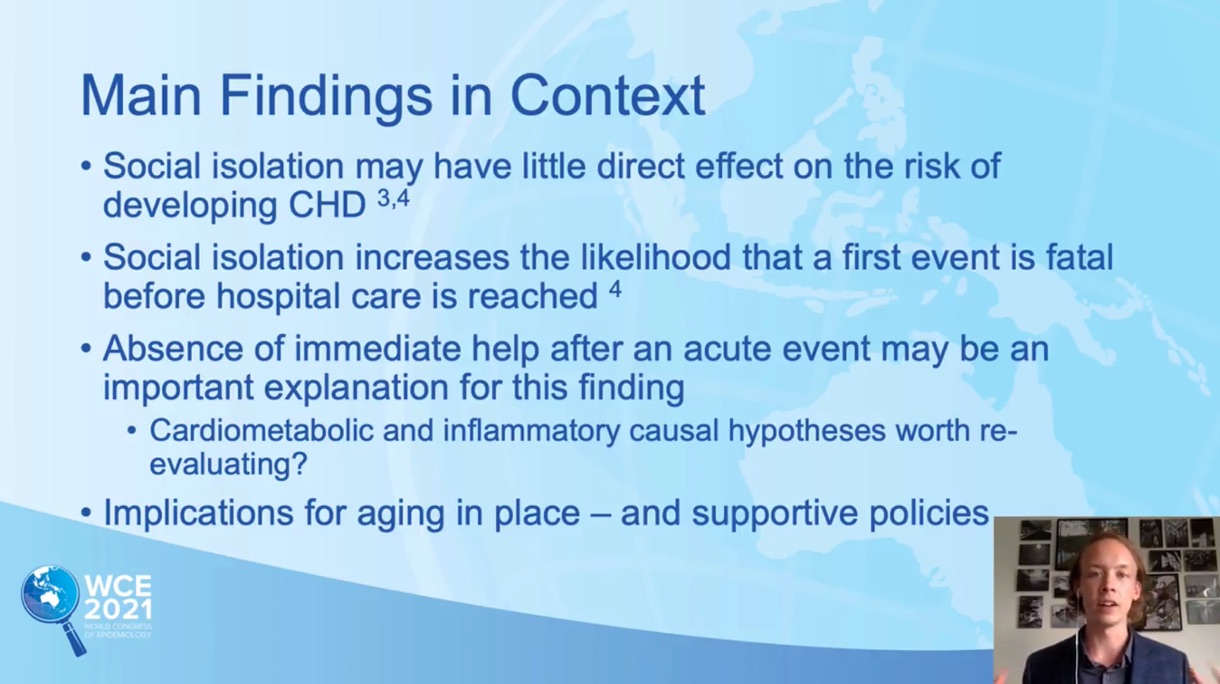 A timely example of how epidemiology can be useful in dispelling health myths was provided in a poster presentation by Professor Saeed Akhtar from Kuwait University. 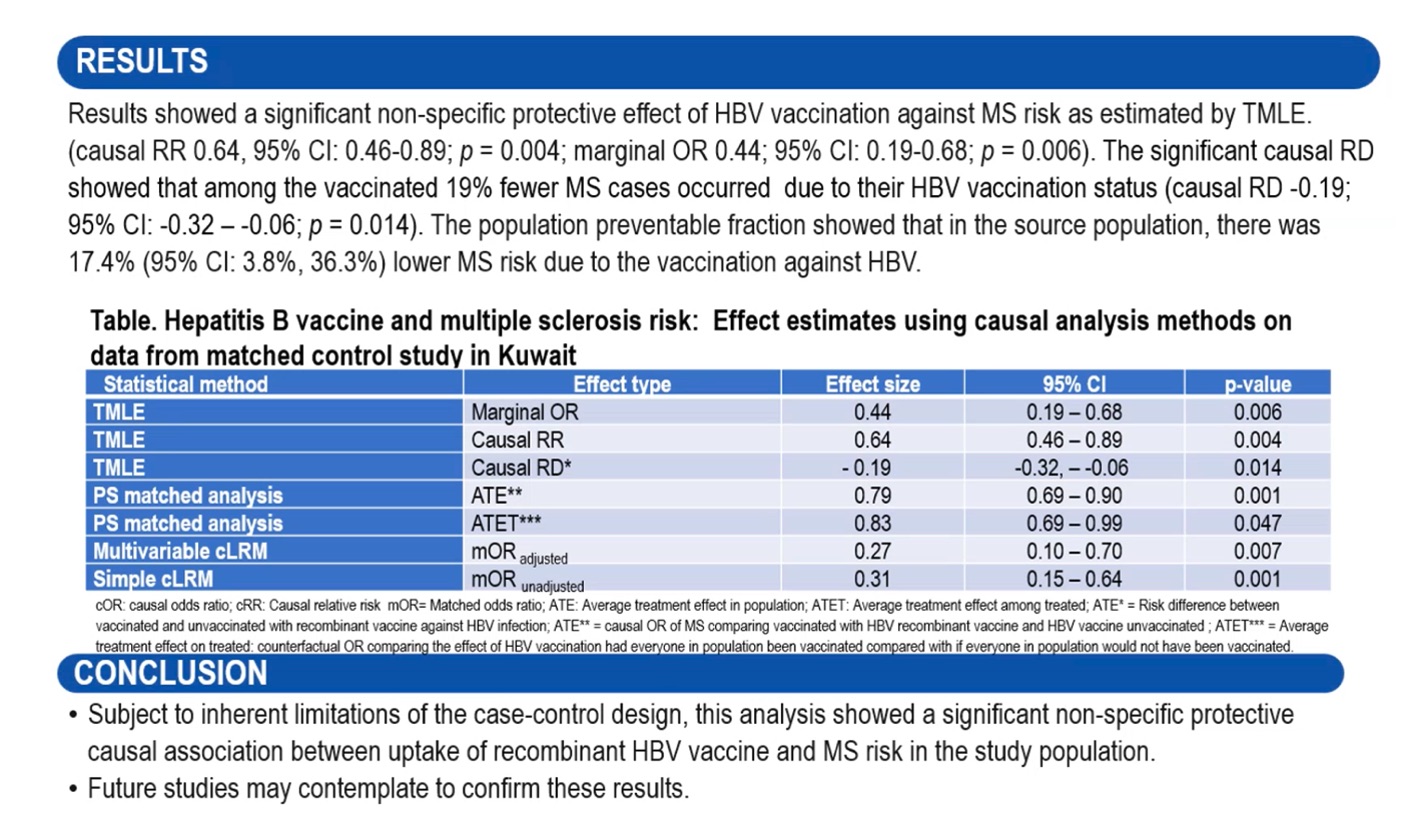 Another poster presentation by Levi Frehlich from the University of Calgary, looked at the association between neighbourhood built environment and health-related fitness.

He found that a number of factors in the built environment, including walkability, street connectivity and recreational facilities were supportive of health-related fitness. 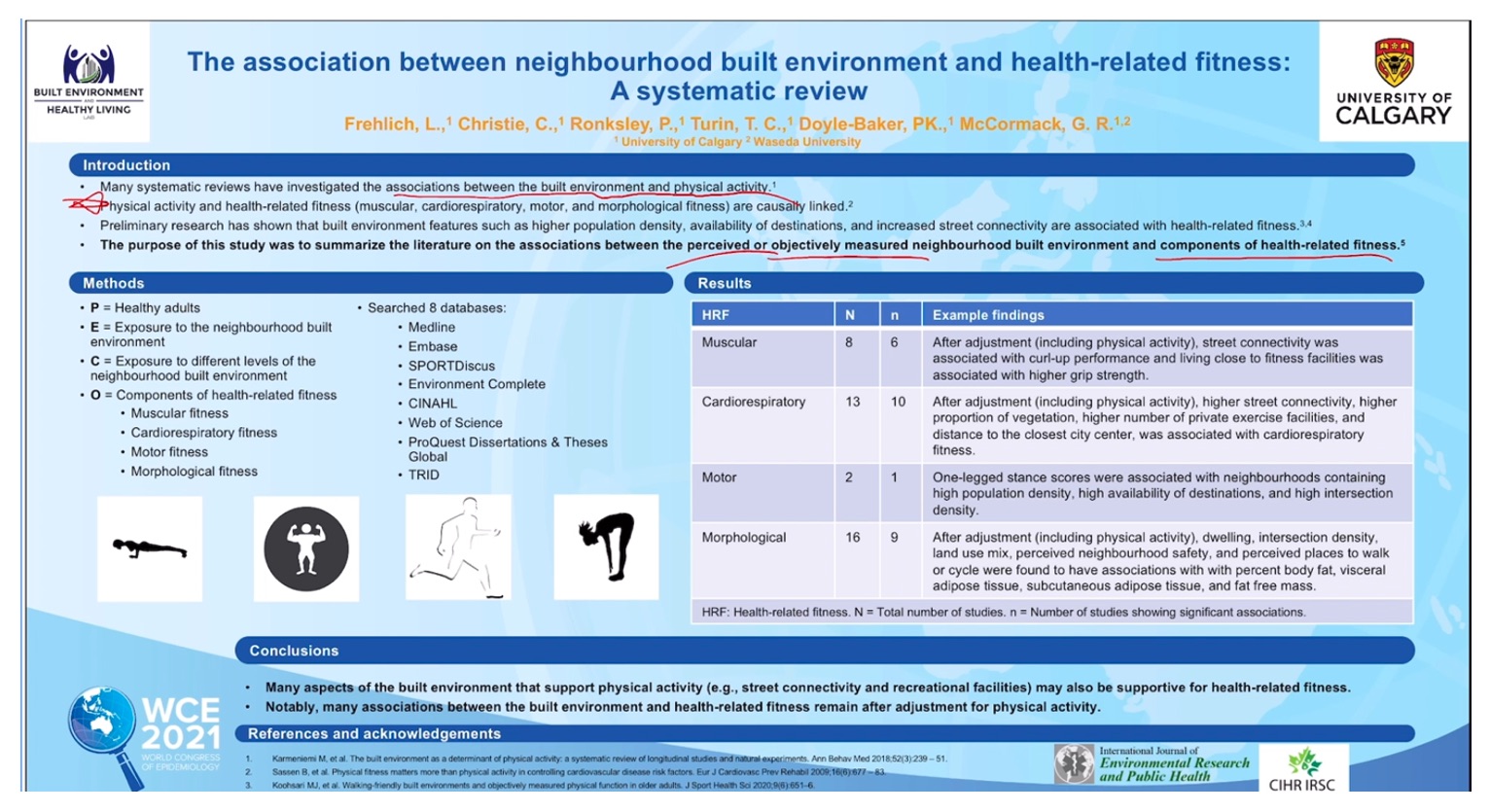 From the Malawi Ministry of Health, Statistical Epidemiologist Steven Azizi described a study conducted into the uptake of preventive treatment for malaria during pregnancy.

The study found that there was an overall low uptake in treatment, particularly among women with less than three antenatal visits.

Her presentation demonstrated the key role that epidemiology had played in this agency. This included identifying that cancer is the leading cause of death in NZ, the burden of cancer is rising, and the cost and complexity of cancer care are rising exponentially.

She also described how epidemiology was used to inform cancer policies and treatments. 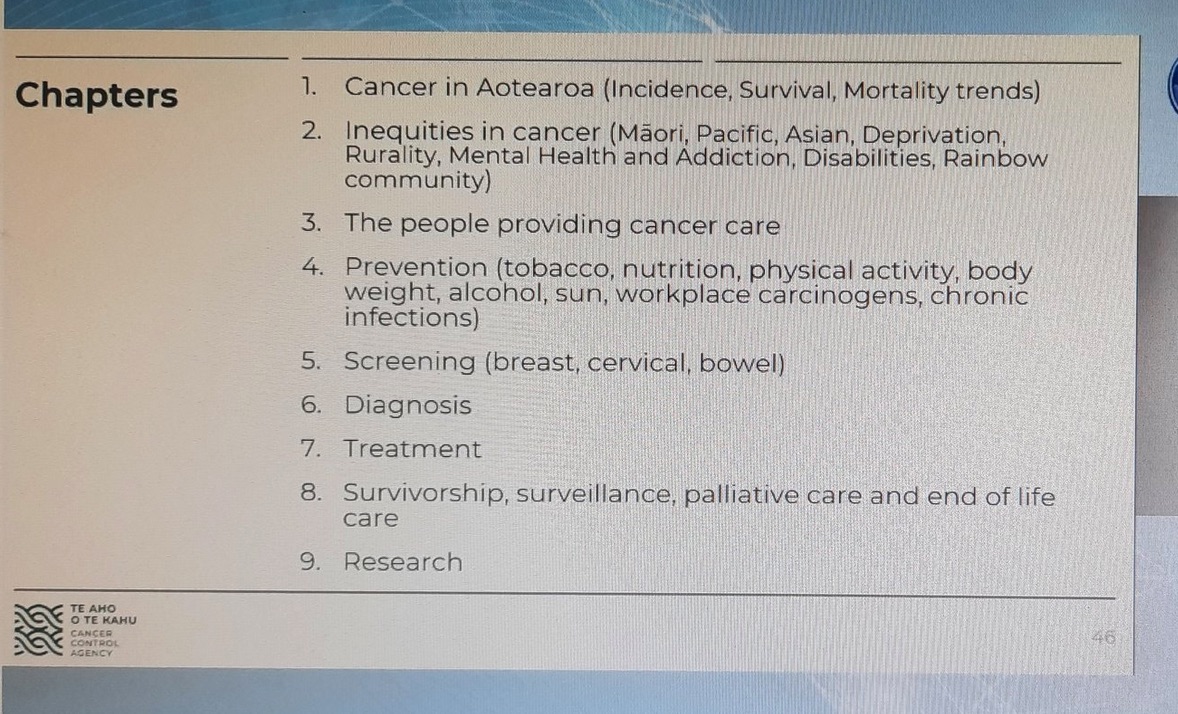 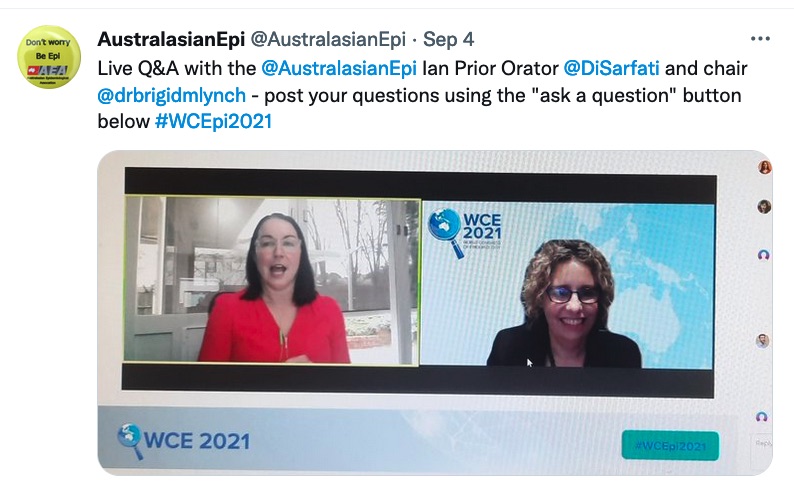 One driver for establishing the centre was epidemiological data showing that cancer survival not as good in New Zealand as in other countries, partly due to poorer survival rates among Māori compared with non-Māori populations.

This data also showed that this difference varied across different areas of cancer. For example, the differences between stomach and colorectal cancer between the Māori and general population was found to be due to higher prevalence of H. Pylori infection in Māori and Pasifika communities.

It also established a causal link between H. Pylori infection and higher rates of childhood poverty and over-crowding, leading Sarfati to pose more fundamental questions about why these communities have higher levels of disadvantage, including looking at the history of colonisation and racism in New Zealand, as well as health system inequities which lead to delays in diagnoses and create barriers to treatment.

During the COVID pandemic, Sarfati described how epidemiological data had been used to identify that the slow-down in cancer diagnoses has disproportionately impacted Māori patients and enabled focus on catching up tests and treatments for Māori post-lockdown. 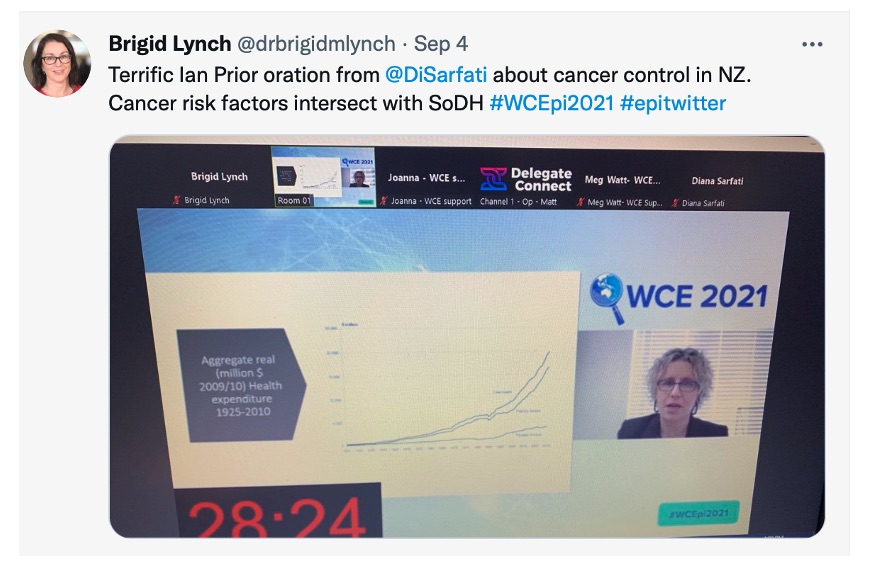 While epidemiological data has been central to the work of Te Aho o Te Kahu, Sarfati was keen to stress that this data cannot be separated from the people involved in the agency’s work.

This includes the organisation’s skill-based council and consumer representative group, both of which have 50 percent Māori membership and a clinical advisory group with medical, nursing, allied health input. 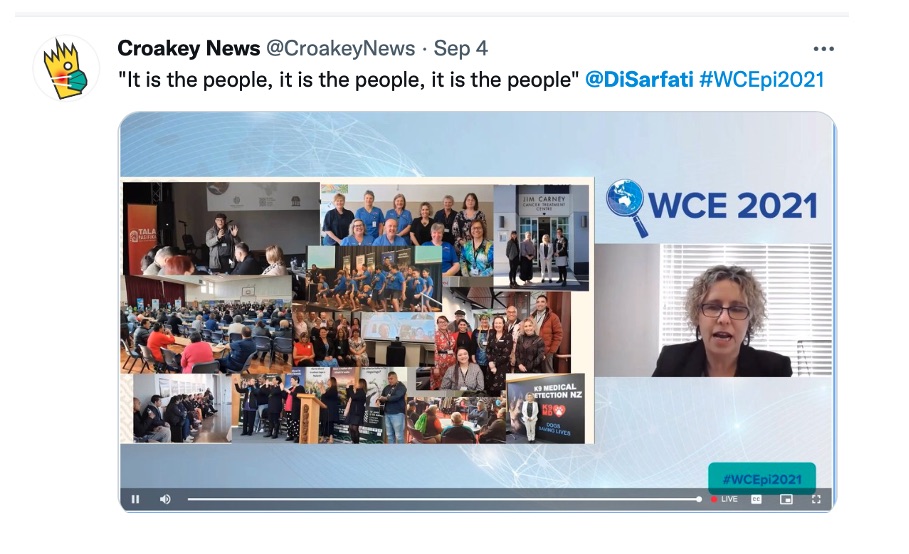 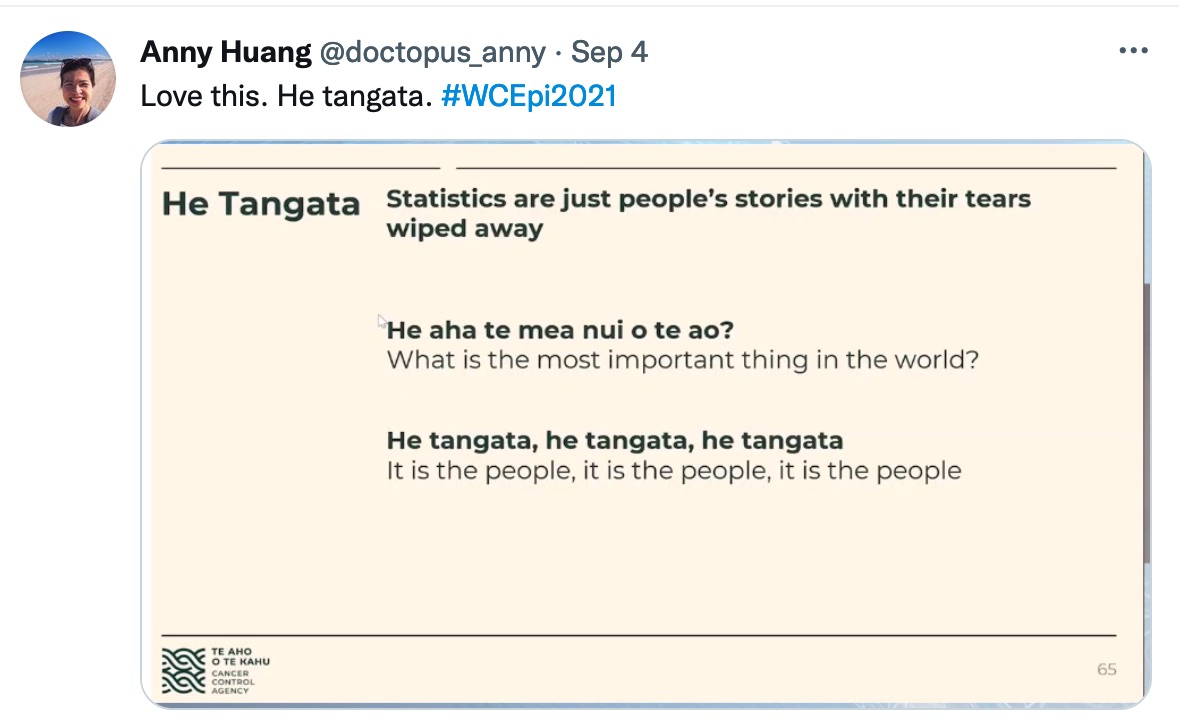 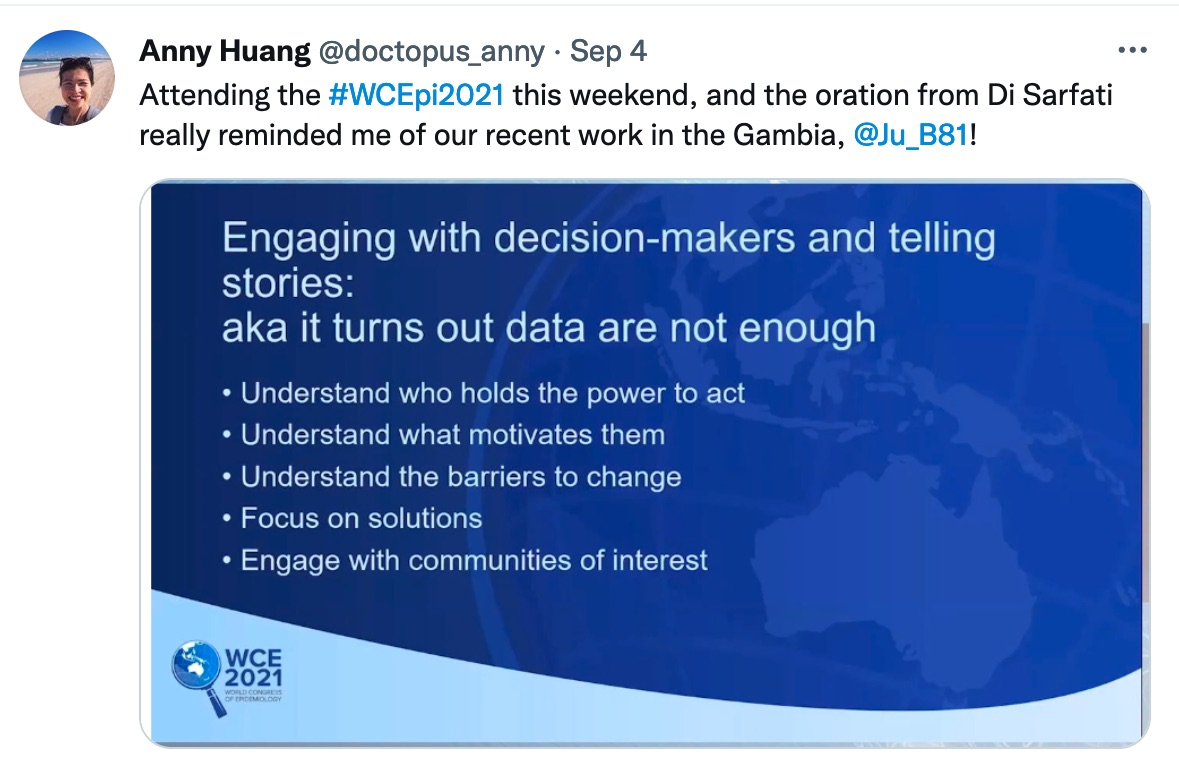 The long-term benefits of epidemiology research in addressing complex and community-wide disadvantage were addressed in a presentation by Professor Deborah Lawlor on the Born in Bradford study.

Lawlor described how novel methods of co-production, whole population and causal analyses coproduction in has made this study successful in making a huge difference in an often ignored community

Part of this success is due to co-producing research with citizens, including asking them what their priority research goals.

This also includes training young people in the community to collect and analyse the data. Lawlor described this as an important way of building their skills and inspiring an interest in maths and science, particularly significant in a town where not many people go onto tertiary education.

The data from this study has been used to inform understanding of a number of different areas of health and well-being, including asthma and allergies, parenting, early childhood intervention, obesity, cardiovascular disease and diabetes.

In a happy coincidence, Lawlor’s presentation coincided with the announcement that the Born in Bradford study had been awarded a Wellcome grant allowing them to continue the study for another seven years, tracking cohorts through crucial high school and early adult years. 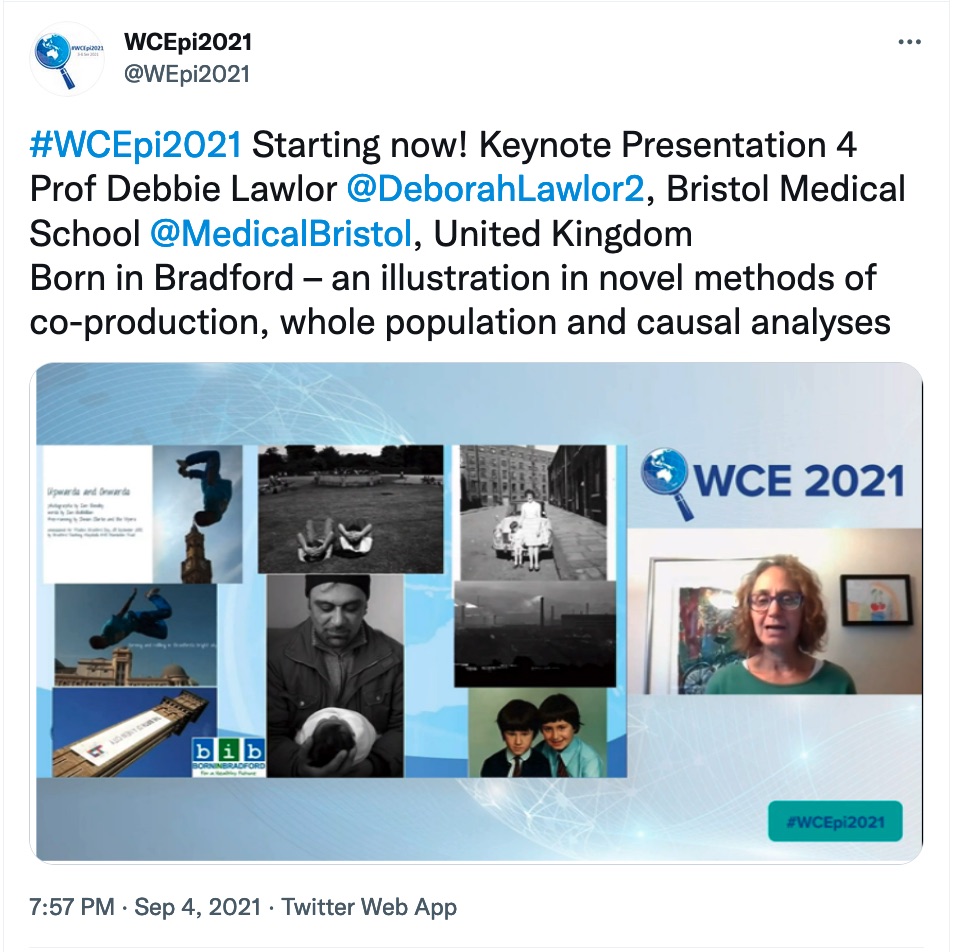 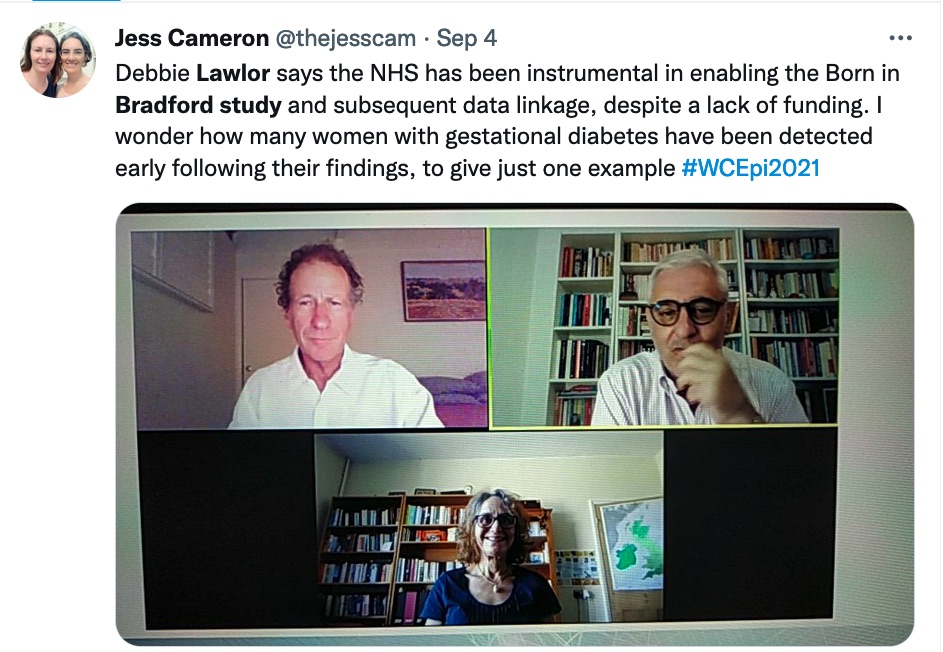 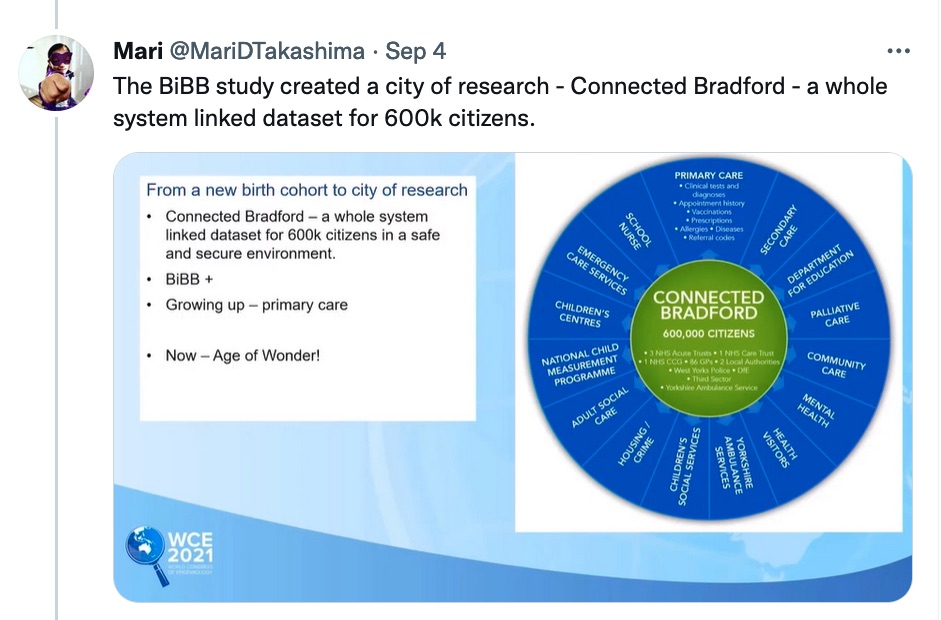 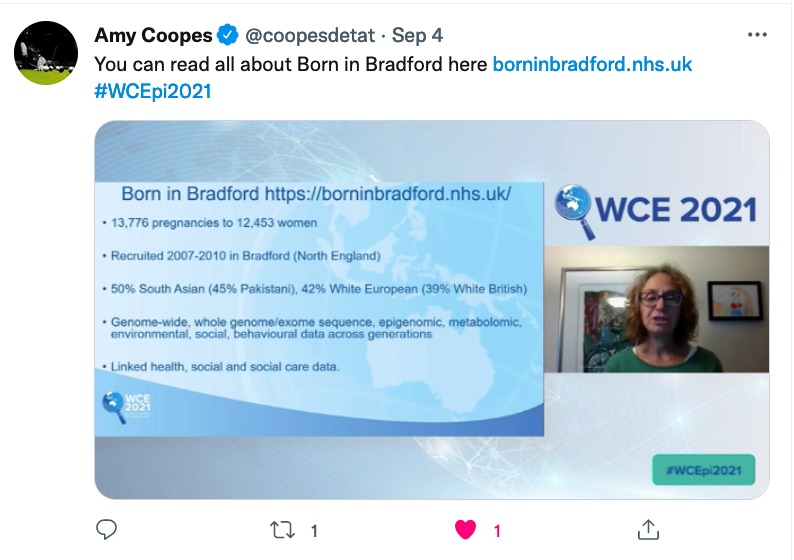 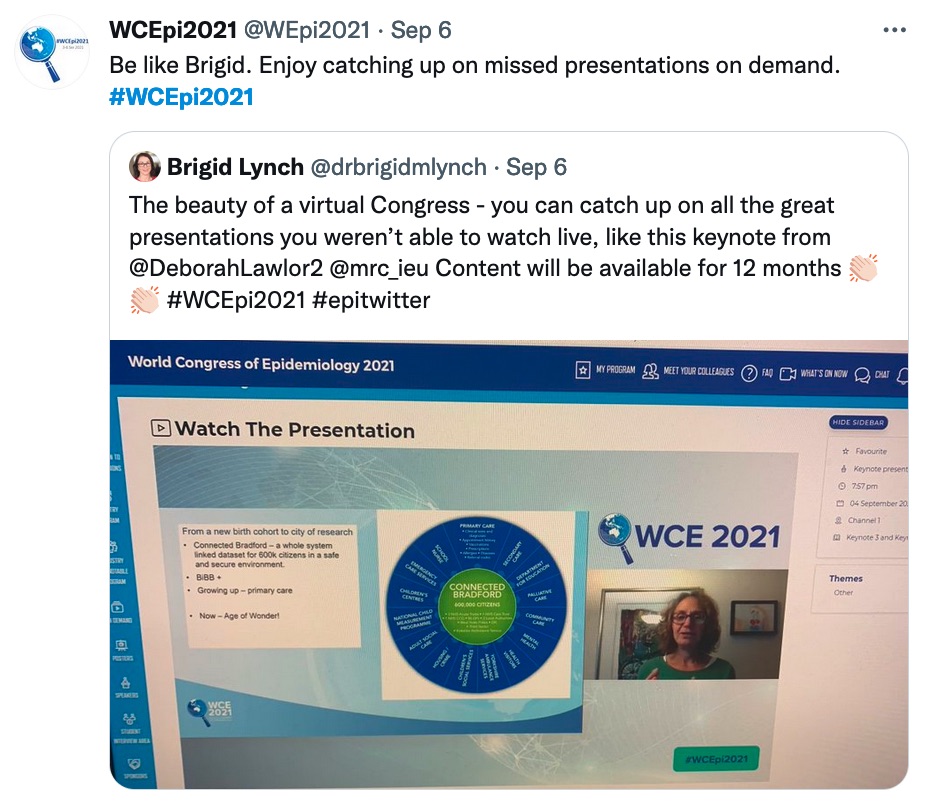 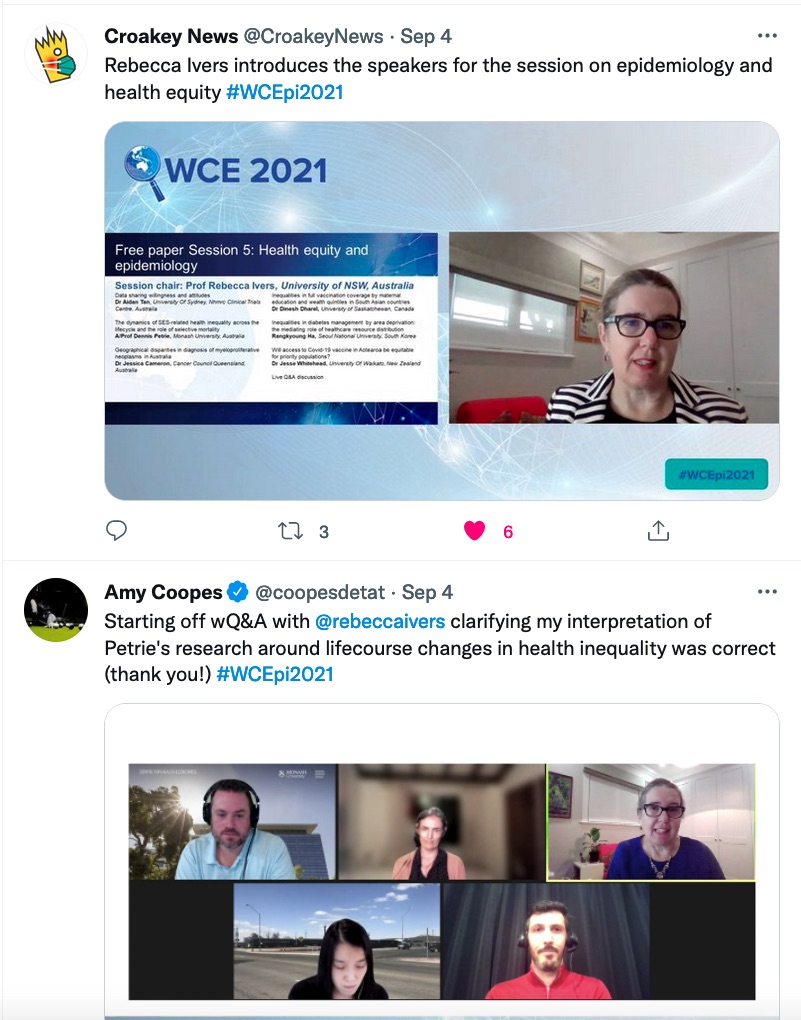 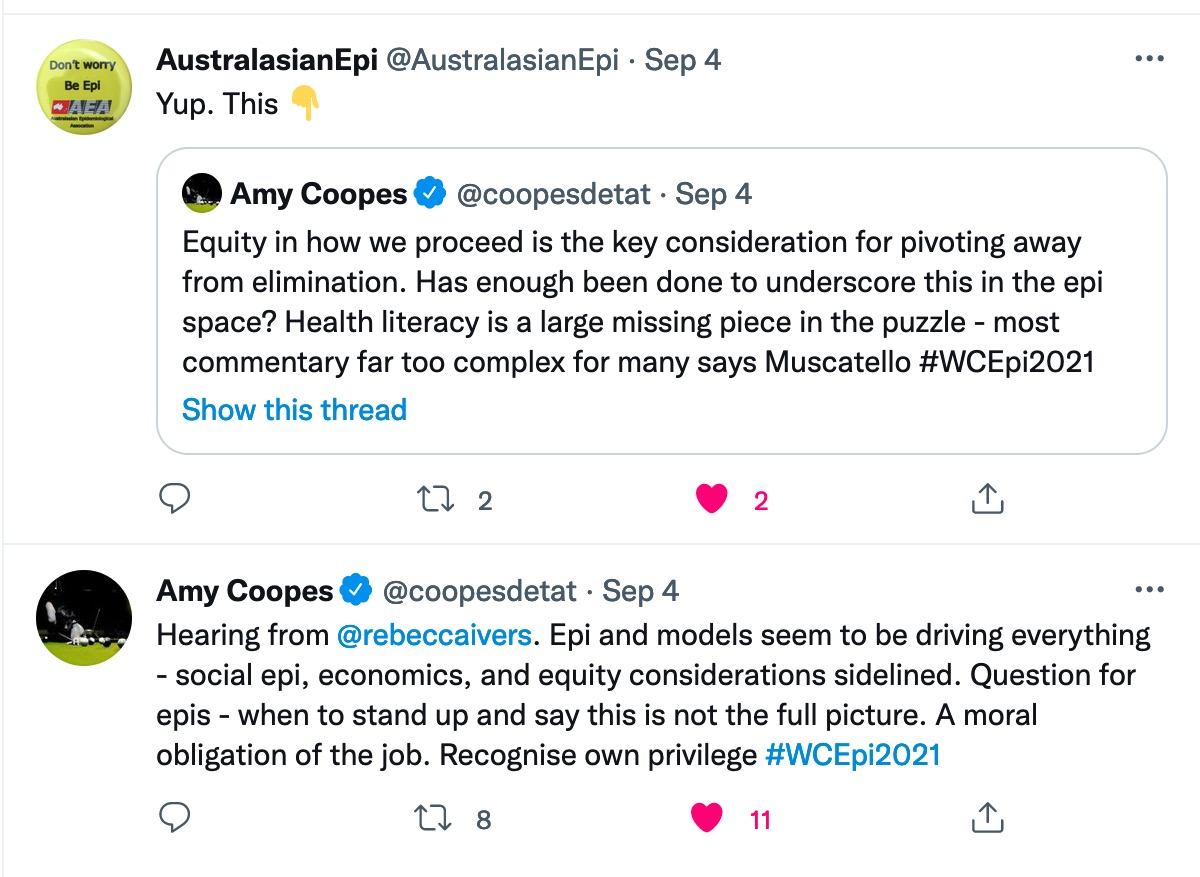 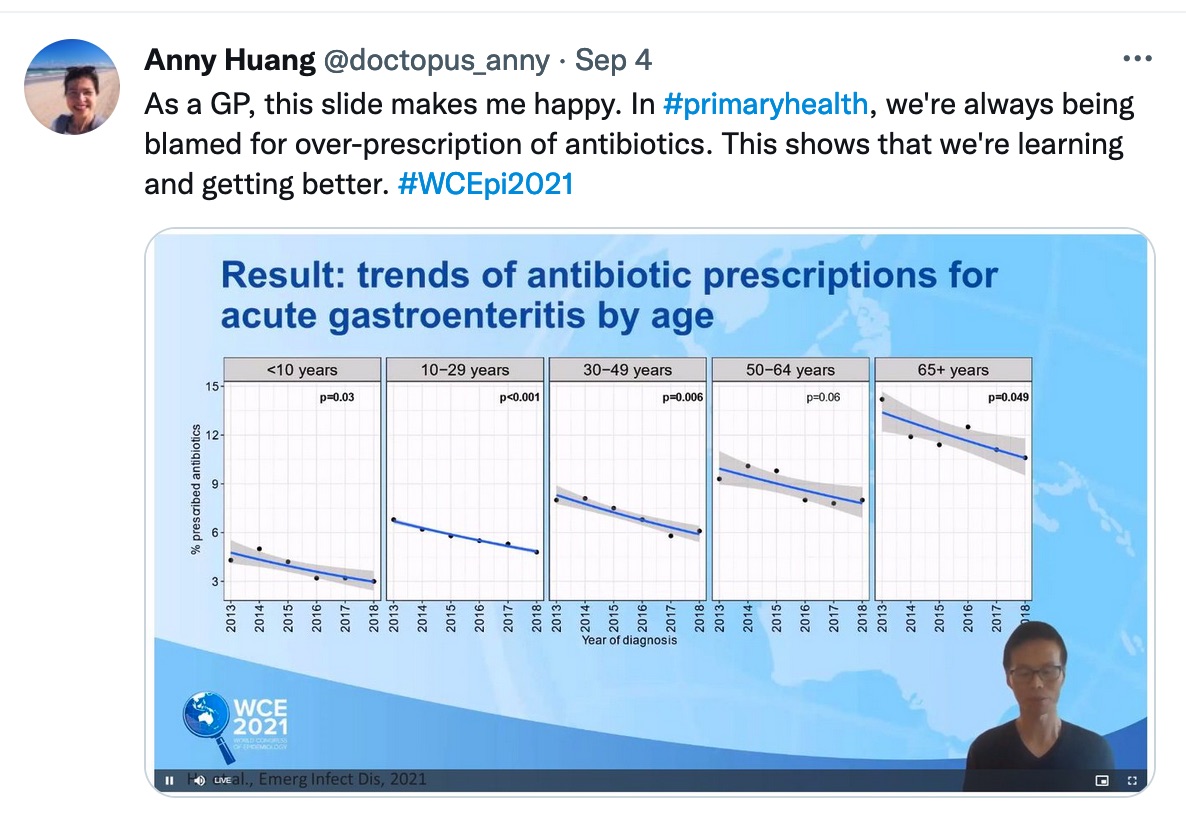 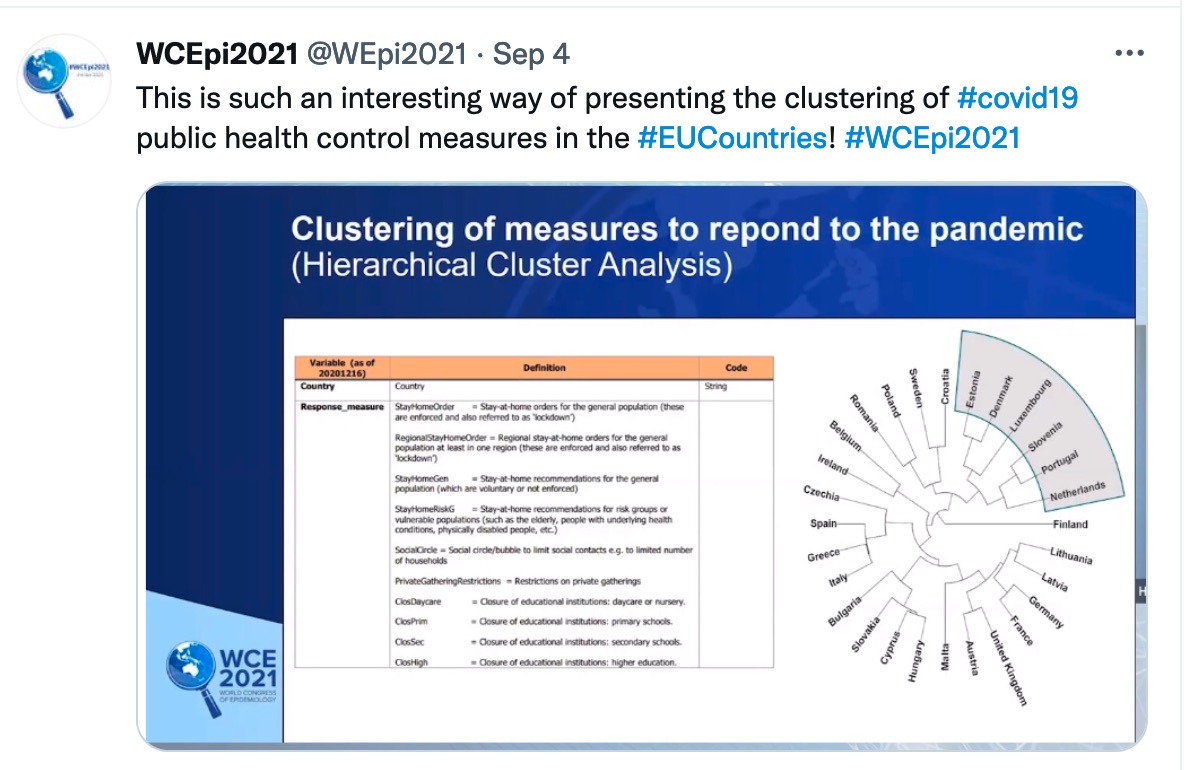 Croakey thanks and acknowledges those sharing the #WCepi2021 news by Twitter. The analytics below show 811 Twitter accounts engaged with the hashtag, sending 6,116 tweets, and creating more than 50 million Twitter impressions between 31 August and 8 September, according to Symplur analytics. 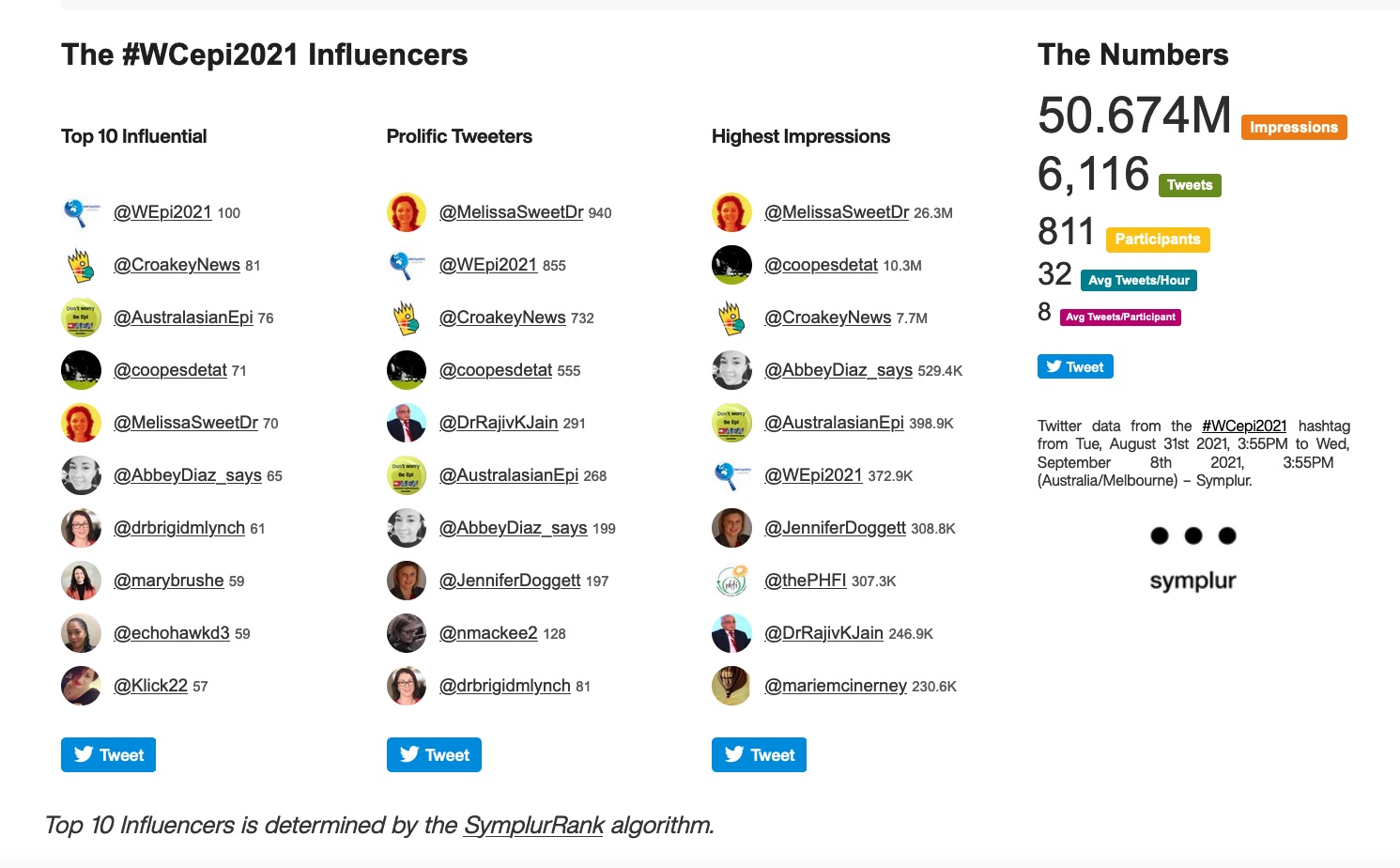 Nicole MacKee will cover other presentations from September 5 and 6 in our next reports from the conference.

PrevPreviousTime to end virtue signalling for young people in health
NextPolice access to COVID check-in data is an affront to our privacy. We need stronger and more consistent rules in placeNext