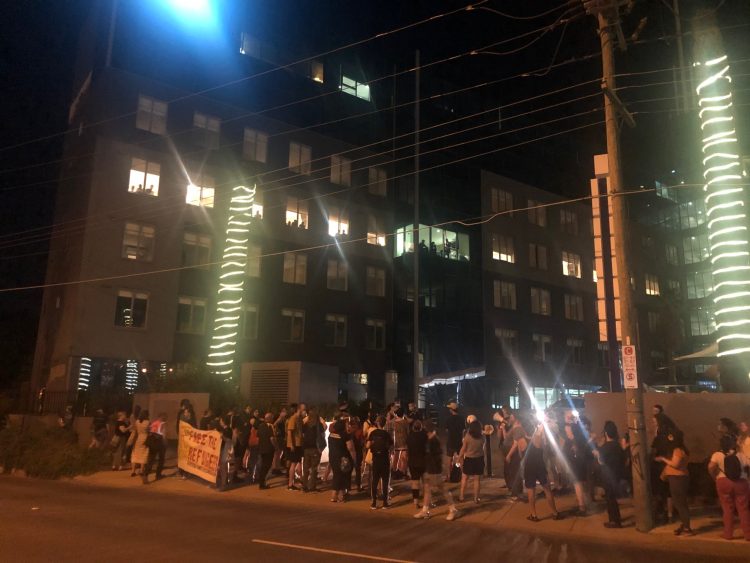 Refugee advocates hold a vigil outside the Mantra hotel in Melbourne this week, amid concern that “Medevac” refugees – watching from the windows above – were going to be suddenly moved to a new facility. Photo: Marie McInerney

‘Don’t move them, free them’: anguish continues for Medevac refugees

*** Update: After this story was published, about 60 refugees and asylum seekers, who had been detained in Melbourne’s Mantra hotel, were moved to another detention site, reportedly the Carlton Rydges Hotel on Swanston Street. Croakey editor, Marie McInerney, who was outside the Mantra hotel this morning, noted the “extraordinary” police presence during the move. We have also added a response from the Australian Border Force to a series of questions about the fate of many refugees and asylum seekers, on and offshore. ***

Introduction by Croakey: Hopes that refugees being held in strict lockdown conditions in Melbourne, Brisbane and Darwin might be soon released on visas into the community were dashed again this week, with news that those held in Melbourne’s Mantra hotel are expected to be transferred to another facility instead.

Former Socceroos captain and human rights advocate Craig Foster had hoped Australia’s cruel and indefinite mandatory detention of asylum seekers would come to an end once they were no longer ‘out of sight, out of mind’ on Nauru or Manus Island in Papua New Guinea.

Yet their pain and stress continue now “on our soil”, he told a candlelight vigil outside Melbourne’s Mantra hotel last week.

The hotel, or APOD (alternative place of detention) as the Home Affairs Department calls it, is where around 60 refugees who came to Australia from Manus and Nauru under the short-lived “Medevac” legislation have been detained for more than a year, not permitted for most of it to leave their closed-off floor of the hotel complex for even fresh air or exercise.

No Australian can say any longer that we don’t know. We know. And it’s time now to bring it to an end.”

Foster, who spearheaded a global human rights campaign last year for the release of former Bahrain footballer Hakeem al-Araibi from a Thai prison, is leading the #GameOver campaign for refugees and asylum seekers who were held in offshore detention for up to eight years.

Alongside many other advocates, he is campaigning for around 500 refugees and asylum seekers still stranded in Nauru and Port Moresby and for the 200-plus Medevac refugees being held primarily in hotels in Melbourne and Brisbane.

He says Australia cannot call out human rights abuses internationally, like China’s repression of the Uyghurs and the Bahrain regime, if it does not face up to its own abuses of Aboriginal and Torres Strait Islander people, and of refugees and asylum seekers.

Foster told Croakey last Thursday at the Melbourne rally that he was hopeful of a breakthrough for the Medevac refugees, with four detainees in Melbourne and Brisbane released with bridging visas in the days before.

Hopes rose further the next day with the unexpected release into the community of high profile refugee, artist and musician Farhad Banesh, who had been whisked away earlier this year from the Mantra to the Melbourne Immigration Transit Accommodation (MITA) facility after raising concerns on ABC TV’s Q&A about heightened risks of COVID-19 spread in detention. 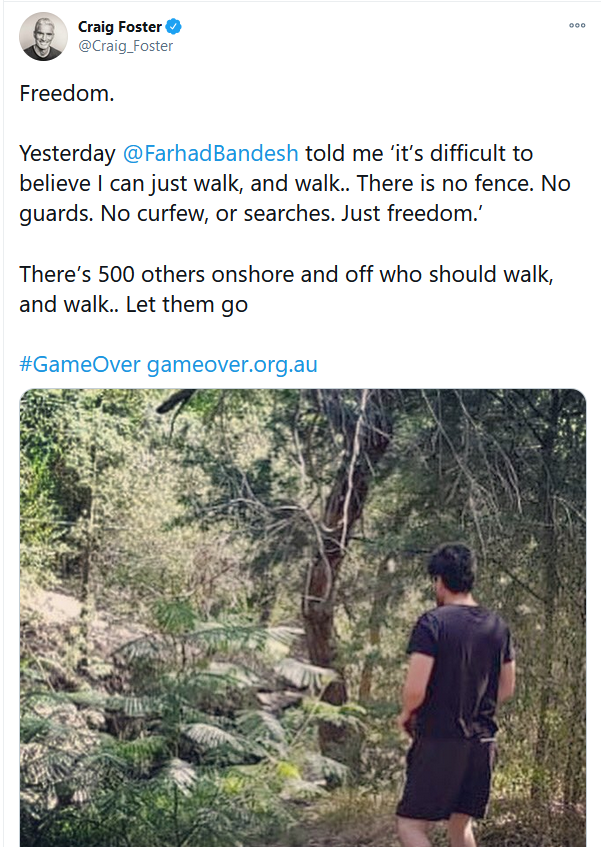 However Banesh’s fellow Medevac detainees at the Mantra were instead told on Monday that they were moving but were not to be released.

See the bottom of this post for the latest update from Australian Border Force.

Mostafa ‘Moz’ Azimi, a member of Iran’s Kurdish minority who was also detained on Manus for seven years, broke the disappointing news in a tweet from the Mantra. 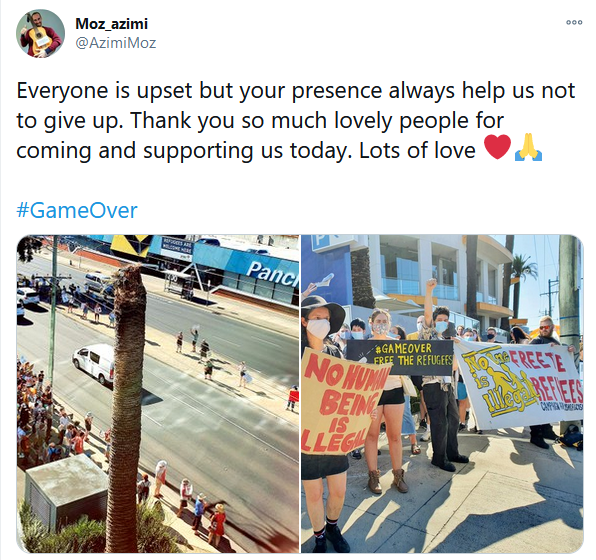 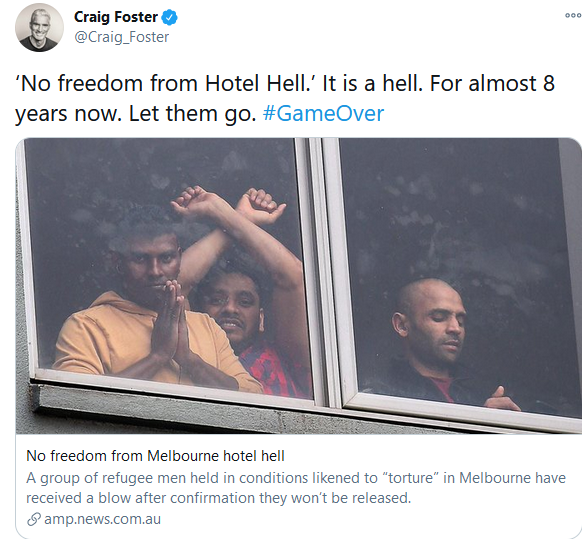 “Everyone is upset, everyone is sad, but we are strong and we don’t feel we are alone because outside are people protesting for us,” Azimi told Croakey on Tuesday, looking out from a hotel window over a late night vigil being mounted by refugee advocates outside the Mantra.

And while advocates are fearful the refugees will once more become ‘out of sight, out of mind’ in a new facility, “pawns in an ongoing political chess game”, Azimi welcomed the possibility of being able to access fresh air and outdoor space at a new facility.

“This place is very difficult, I am losing my mind,” he said. “I just need to walk, to be in the sun.”

Azimi told Croakey in September, in the midst of Melbourne’s tough, extended COVID-19 lockdown, that he and other detainees were forced to spend 23 hours a day in their rooms, with the other hour spent “walking in the narrow corridor, going to the kitchen to make coffee or tea or to play ping pong in another room”.

Melbourne’s hard lockdown finally lifted after 112 days in Octobers, but theirs has not, leaving them like fish in an aquarium, Azimi told the protest rally last week. Speaking by phone from his hotel room, he said:

We exist in this small enclosure, where we are watched constantly.

We can see the outside world, but we cannot touch it, we cannot live in it – we can only observe it. And when we speak, only the people who make the effort to listen through the glass can hear us. The rest of the nation carries on as if we are not here.”

Azimi urged Australians to mobilise under the #GameOver campaign, to “once again call on the government to stop ignoring us, to finally put an end to our torture”.

Where, after all, do universal human rights begin?

In small places, close to home – so close and so small that they cannot be seen on any maps of the world. Yet they are the world of the individual person; the neighbourhood they live in; the school or college they attend; the factory, farm or office where they work.”

He thanked those who gather each day — 5pm on weekdays, 3pm on weekends — outside the Mantra to call for the refugees to be set free, saying they understand Roosevelt’s call in their hearts.

“And it is people like you who will change the world,” he said.

“Time to end this” 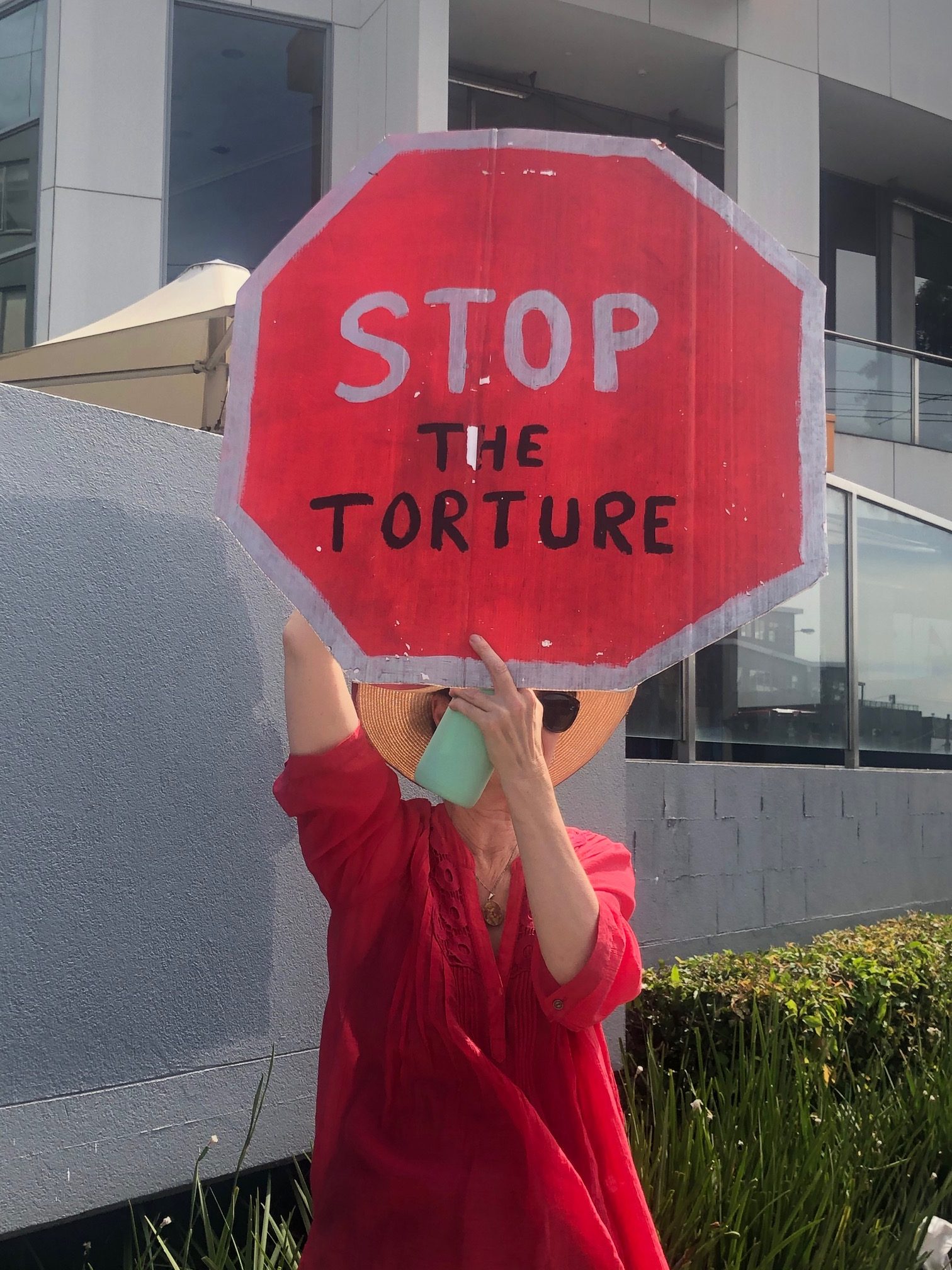 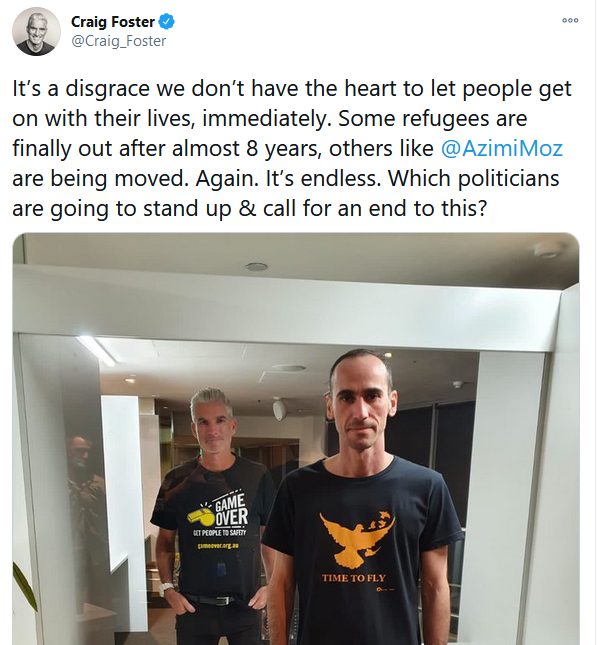 Foster, who first met Azimi and Bandesh more than a year ago in Port Moresby, told the protest that he had been proud to lead Australia’s national soccer team.

“But when I pulled on the Socceroos jersey and wore the captain’s armband, I did not play for this,” he said, describing the indefinite mandatory detention of asylum seekers as “torture”.

He talked about Somali refugee Saif Ali Saif, detained in Brisbane, who is not permitted to “go two kilometres to see his wife in such duress and so ill”, and of witnessing “the horrendous circumstances in which our own country is keeping innocent people incarcerated”.

“It’s time this country recognised their rights, upheld them and freed them,” he said.

Foster and other advocates, including the Human Rights Law Centre, say the Medevac refugees are being singled out for harsh treatment from a Federal Government that was forced by crossbenchers to allow them into Australia for medical care until it had the medevac legislation repealed.

In a statement issued by Amnesty International Australia, Farhad Rahmati, who is currently detained in Villawood, Sydney, said that Immigration Minister Alan Tudge could, “with a stroke of his pen”, release everyone into the community, at zero cost.

“Instead he is choosing to relocate the [people at Mantra] to another prison, spending millions of taxpayers dollars! After eight years of detention this is nonsense and we should be free,” he said.

Amnesty Refugee Advisor Dr Graham Thom said the fact that some refugees have been released and others are being moved to another facility “demonstrates the totally arbitrary and cruel nature of locking innocent people up”.

It was “unfathomable” that people could be treated with such disregard, and Amnesty has grave concerns for their mental health with this latest development which “unnecessarily prolongs the unbearable limbo the Australian Government has them trapped in,” he said.

Watch this interview with Craig Foster.

Watch Craig Foster’s speech to the rally in Melbourne.

Croakey put a series of question to the Department of Home Affairs about the issues raised in this article:

We received this response:

“The below may be attributed to a spokesperson from the Australian Border Force (ABF).