A slip of the tongue that almost had Dr Philip Nitschke introduced to the CRANAplus conference delegates as a “humourist” rather than a “humanist” turned out to be ever so apt.

Dr Nitschke, Director of Exit International, raised quite a few laughs as he took gentle and not so gentle digs at pollies and, while he is hopeful about workable voluntary euthanasia legislation in the future, he joked “don’t hold your breath … or maybe you should!”

As he said later, humour is actually a good way to get people talking about death and dying. And there was certainly a lot of talk at the conference yesterday morning about end of life (EOL) decisions.

Two areas that all three speakers agreed on were: the need for all of us – the medical profession and society in general – to start talking about death and dying to generate better end of life decisions; and the valuable opportunity provided by CRANAplus in encouraging intellectual debate on the issue.

“We are so unengaged in this issue as a society,” says Dr Saul. “People just don’t want to talk about it.

“Most Australians now die in acute care. With such a low level of discussion of EOL until the last 24 hours, often the wishes of the person are not known, and there can be conflict between family and carers.

“My ideal change in the future would be that our death-denying society evolves and becomes less so.”

Dr Luxford agreed: “I would argue we really need political engagement – politicians to understand what this is all about,” she said.

“End of life care is integral to the health system, not an added extra to slot into the curriculum.

“We spend so much time focused on life – why not on death?”

And Dr Nitschke’s parting shot was: “In my ideal world, every person of sound mind over 50 gets end of life drugs to put in the cupboard… then a vast sea of elderly people would have a safety net.

“It would be comforting to know that, if it gets too bad, you know you have that choice. The fear is out there that you might end up in a medical nightmare you can’t get out of.”

CRANAplus will start operating as a fully-fledged registered training organisation, or RTO, on January 1 next year.

The organisation has not only successfully met the very stringent guidelines and requirements to become an RTO, it has passed the initial audit with flying colours, with no areas of non-compliance and no issues requiring any additional input – putting it in the top 10 per cent of RTO applicants.

“We have the runs on the board already in the provision of flexible courses that are tailored to meet the specific needs of remote health workers,” says National Education Manager Libby Bowell.

“Becoming an RTO takes us to another level again.”

CRANAplus decided two years ago to move the organisation towards RTO status, recognising the increasing demands in the tender process from organisations, agencies and departments of health.

“We are unique in the courses we deliver,” says Libby. “We don’t run courses in a standard classroom with groups of similar clients with similar jobs.

“We go far and wide, travelling to remote parts of Australia, and our groups can include a wide range of health professionals.

”It all adds to the complexity of what we do.”

CRANAplus will begin 2013 with seven core accredited courses in remote emergency care (REC) and maternity emergency care (MEC), with constant assessment of the need to bring more of the courses on offer into the accreditation mix.

Meanwhile, CRANAplus topped an Australasian survey of member-based associations in the satisfaction and engagement categories.

Interim President Paul Stephenson reported on the results of the survey conducted earlier this year. It also found training programs linked to CPD points were the most valued form of member services in general.

Members rated CRANAplus’s performance most highly in the provision of professional development resources, with 98 per cent satisfied that CRANAplus performs this function effectively.

Performance from One Mob Different Country

One Mob Different Country is a program that allows low-security Indigenous prisoners who have demonstrated good behaviour to take part in performing traditional aboriginal dances at events for community, government and not for profit organisations.

It has been operating out of the Darwin Correctional Centre (DCC) for approximately 12 years.

The dancers have been given permission from the Elders of the Beswick and Barunga communities to perform certain dances and songs from that region.

The name One Mob Different Country refers to the fact that the dancers themselves may come from different communities (different country) but they come together as a group to dance (as one mob). 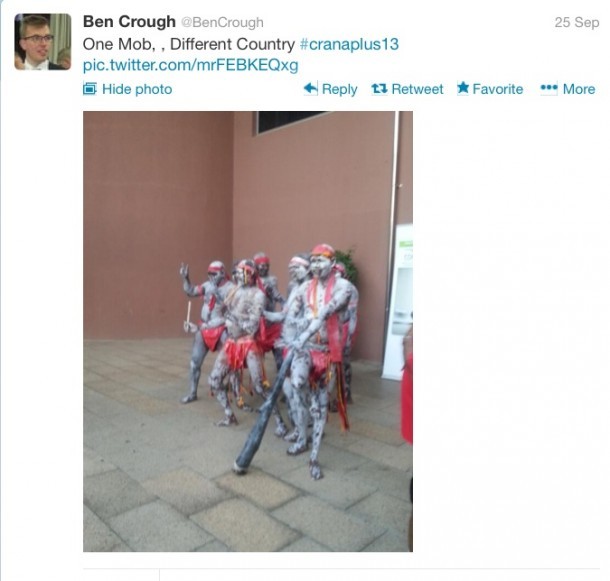 • Freelance journalist Rosemary Cadden and editor of the quarterly CRANAplus magazine is covering the conference for Croakey readers. Thanks also to photographer Rosey Boehm.

You can track the CRANAplus conference coverage here and here is the conference newsletter.