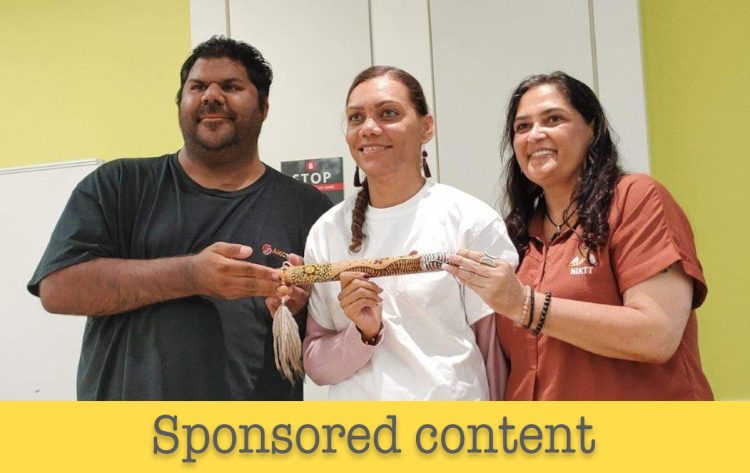 Introduction: Aboriginal kidney patients are leading a ground-breaking research project where their experiences, resilience and expertise are re-shaping kidney health research and clinical services and challenging health systems to do better.

This article is the second in a series sponsored by the Adelaide-based Aboriginal Kidney Care Together – Improving Outcomes Now (AKction) project, and edited by AKction chief investigators Dr Kim O’Donnell, a Malyangapa/Barkindji woman, and Kelli Owen, a Kaurna, Narungga and Ngarrindjeri woman.

Readers are advised this series mentions people who have passed; we publish their names and photos with permission, respect and acknowledgement of their legacy as kidney warriors.

The odds were against the call ever coming, so it was a shock that night in 2016 when Kelli Owen’s phone rang just before midnight to tell her that, after three years on the kidney transplantation wait list and decades of chronic disease, a kidney had become available for transplant.

Owen, a 48-year-old Kaurna, Narungga and Ngarrindjeri woman, teacher and mother of five, rushed from her home in Murray Bridge, south-east of Adelaide, for the life-saving operation that took place the next day – May 26, National Sorry Day.

On the other end of the phone that night was Associate Professor Shilpa Jesudason, a Royal Adelaide Hospital nephrologist, who went on to be part of Owen’s transplant care team.

“Shilpa wanted to know whether I would accept the offer and I said, ‘hell yes, get me there!’,” Owen remembers. “I didn’t even have my bag packed because I didn’t think it was ever going to happen for me,” she said.

The pair next met three years later when Jesudason, by then the national clinical director of Kidney Health Australia, attended Owen’s keynote address to the World Congress of Nephrology’s (WCN) Satellite Symposia on First Nations Kidney Health in Naarm (Melbourne).

Soon after they were co-chairing the National Indigenous Kidney Transplantation Taskforce (NIKTT) Community Engagement Committee and working together in leadership roles on the ground-breaking Aboriginal Kidney Care Together – Improving Outcomes Now (AKction) project in Adelaide.

Owen’s chances of being offered a kidney that night in 2016 were low because of a range of personal and clinical factors. But another critical reason is the systemic racism and lack of cultural safety in the health system that contributes to Aboriginal and Torres Strait Islander people with end-stage kidney disease being less likely to be wait-listed for transplantation and therefore up to ten times less likely to receive a kidney transplant.

This is despite disproportionately higher rates of end-stage kidney disease among Aboriginal and Torres Strait Islander people, compared with non-Indigenous Australians, particularly in remote areas, where the incidence is up to 18 to 20 times higher than in metropolitan areas.

“If we had peer navigators to help my First Nations brothers and sisters navigate the system and culturally appropriate health services, it would be a different story,” Owen said.

It’s these terrible inequities that drive the work of the AKction project, now led by Dr Kim O’Donnell, a Malyangapa/Barkindji woman and health researcher, with non-Indigenous researcher Dr Janet Kelly.

Funded under a $2 million Ideas Grant from the National Health and Medical Research Council, the game-changing project is hailed for its Aboriginal and Torres Strait Islander leadership, autonomy and governance and the trusted relationships it has built with non-Indigenous clinicians and researchers.

Leading the work is a small group of Aboriginal patient experts, who are either on dialysis, have had kidney transplants or are waiting for transplants and form the AKction Reference Team, which is now being used as a model for similar bodies across Australia through NIKTT.

“We are leading those conversations, sitting at the same table with the academics and specialists who are able to open doors and change the way things are being done,” said Owen, who is a Reference Group member and a chief investigator.

“This will be our Brave Space together,” the AKction project declares, outlining four sub research themes that centre the voices of patient experts:

Owen’s negative experiences of healthcare began when she contracted tuberculosis as a young girl. She was put on a “cocktail of meds” and ended up hating hospitals and nurses. When she was told, at 19 years of age and with few symptoms, that she had kidney disease, she “didn’t want to know”.

A decade later Owen was told her kidneys were functioning at just 30 percent of capacity and that she needed acute care. Handed a bunch of DVDs and pamphlets to explain her condition, the gaps in education and support for Aboriginal and Torres Strait Islander patients were clear for the then primary school teacher.

“I didn’t see myself in any of that pre-education,” she said. “There were no Aboriginal people there, despite our people making up such high numbers in chronic kidney disease.”

Later, living back on Country in Murray Bridge, the stresses of her illness hit hard. She travelled to Adelaide three times a week for dialysis, cutting into her work hours and disrupting family life. The transport costs alone were “astronomical”.

Those questions continued after her transplant, needing to live with relatives in Adelaide while completing weeks of daily clinical checks, cared for by her teenage son.

She began to ask who should be held accountable for such poor healthcare for her people and why she had rarely seen Aboriginal or Torres Strait Islander health professionals in her journey. “I was thinking, ‘our people are smart, where are they, where are the career pathways?”

Then this year the ground shifted again, when her 17-year-old son Kuranye (a Kaurna word meaning rainbow) was diagnosed with the same kidney condition – Alport syndrome – that she has.

While his diagnosis is heart-breaking for the family, Owen is hopeful that, despite the many gaps she is already seeing in care for young Aboriginal and Torres Strait Islander kidney patients, his kidney journey will be better than hers.

“Knowing the questions to ask puts me in a different position now,” she says.

The 35-year-old former youth worker and children’s book author says the disease is often very isolating. “You feel alone, like you’re in your own little bubble.”

An Adnyamathanha woman from Port Augusta, more than 300 kilometres north of Adelaide, Lester knows well the burdens faced by many Aboriginal and Torres Strait Islander patients, with 78 percent having to relocate to cities for dialysis, away from Country and community, often with devastating impacts on their wellbeing and that of their families.

Many, she says, are Elders or others with cultural, family and financial responsibilities, “doing a lot of caring of other people”. These obligations “almost take precedence over their own health” — something few health services or professionals factor in when they talk about treatment ‘compliance’.

Lester remembers vividly getting the results of her first kidney function test in 2004. She was told to rush to hospital, where she was led straight to the high dependency unit. At first she thought this was because there were not enough beds in the general wards, until the seriousness of the diagnosis sank in.

Despite the shock and stress, it was a relief to finally know what was wrong: “I thought, ‘okay, this is what I’ve got, what do I have to do to survive?’ I went into survival mode.”

Now she wants more for herself and other Aboriginal and Torres Strait Islander kidney patients, to not just survive but “to thrive” — which is what makes the AKction2 project so full of promise and strength for everyone involved.

“We’ve been asked to dream big,” Lester says, inspired to be part of a team with the power to make change, to sit at decision-making tables in a process that feels safe and respectful and that acknowledges the strength and resilience of its patient experts.

Owen talks about the relief and comfort she felt at the first meeting in 2019 of the AKction Reference Group. Its members were able to yarn, with no pressure from a constrained agenda. Their ‘terms of reference’ was renamed ‘the way we work together’.

“I just felt like I was at home with my people,” she said.

Owen laughs that in the early days she did not understand the differences in research roles. But AKction has since opened her eyes to decolonising methods, of “how important research is for us, doing it our way, with our people”, after a history where “we haven’t been a part of the research, we’ve just been the research, talked to and talked at”.

“Now we’ve flipped that,” she says, talking about AKction as a “movement” where “it feels like the wheels are all moving together”.

That shift is driving real change in care in South Australia and informing national clinical guidelines.

Kanggawodli (meaning Caring House in Kaurna), an Aboriginal-managed SA Health hostel in the inner northern Adelaide suburb of Dudley Park is now home to some of that powerful change.

In response to AKction’s advocacy, two dialysis machines were installed in the hostel that provides primary healthcare as well as accommodation for patients from regional and remote areas— a first for an Aboriginal hostel in Australia. This means remote and regional community members staying there can have dialysis in familiar and culturally safe ways, without needing to travel to the more ‘unfriendly’ environment of a metropolitan hospital.

Kanggawodli represents a breakthrough in better care, according to Dr Stephen McDonald, senior nephrologist at the Royal Adelaide Hospital and long-time Clinical Director of Renal Services for the Country Health SA, who has also been part of AKction since its early days and has worked alongside Kelly and O’Donnell.

McDonald had a “light bulb moment” nearly a decade ago when a mobile dialysis ‘bus’ was introduced in the APY lands and he saw what it meant for patients to go back on Country for short periods of time. They were able to fulfil cultural commitments, to be part of their own communities, and to undergo dialysis surrounded by kids and grandkids.

McDonald later co-authored a research paper on the initiative, describing the “grief and loss” many patients felt from having to travel far from home for treatment in a clinical environment.

It was a “tipping point” for him in developing a better understanding of culturally safe care and the need to turn a critical gaze on the system when individuals or communities struggled to access healthcare or did poorly in seemingly high quality facilities.

Kanggawodli, which has its dialysis chairs in the middle of the hostel’s dining room, is “absolutely the next development in that”.

“AKction has changed the way we are thinking about how we provide services, how we talk, and how we refer to and approach problems.” 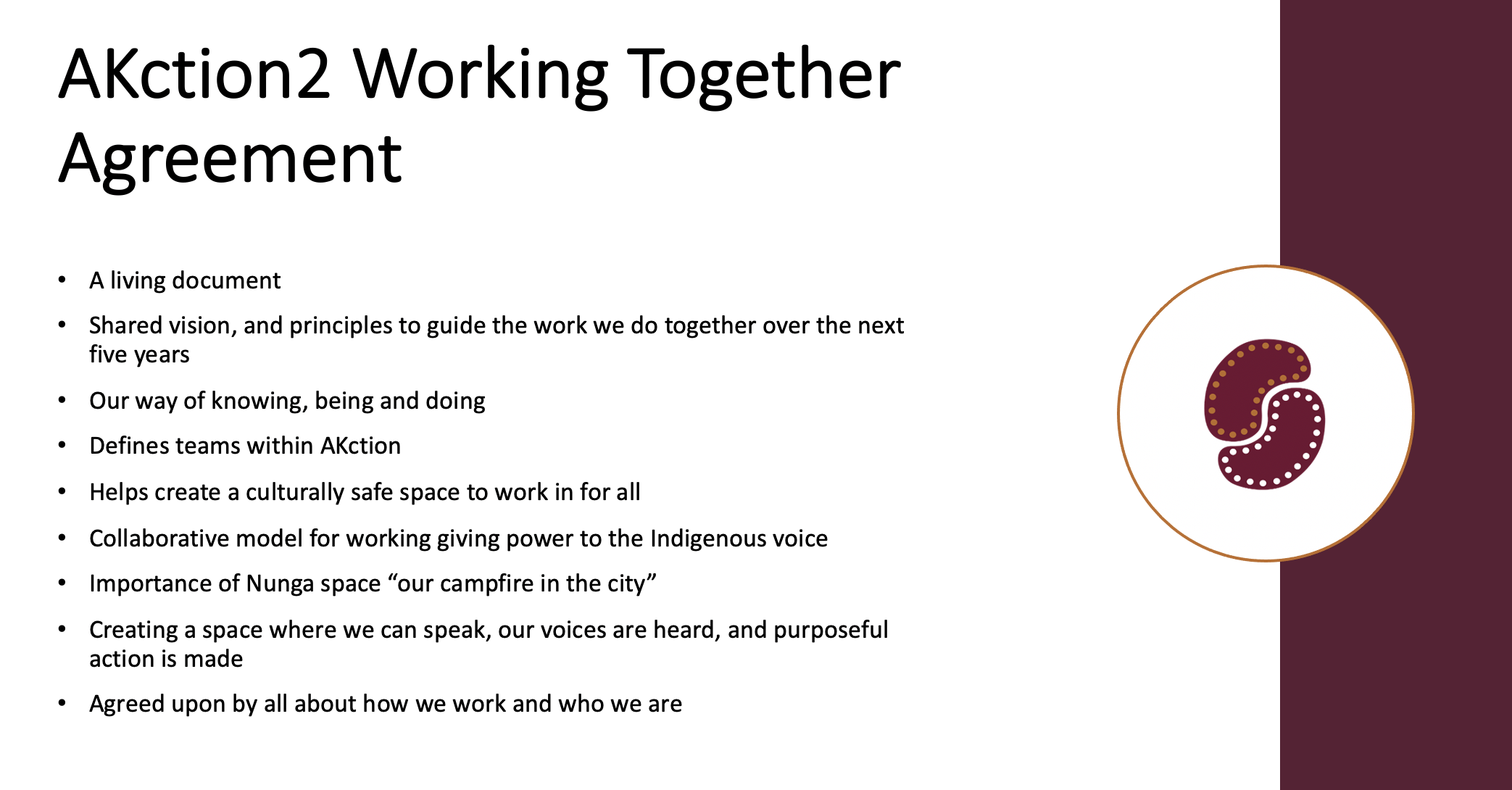 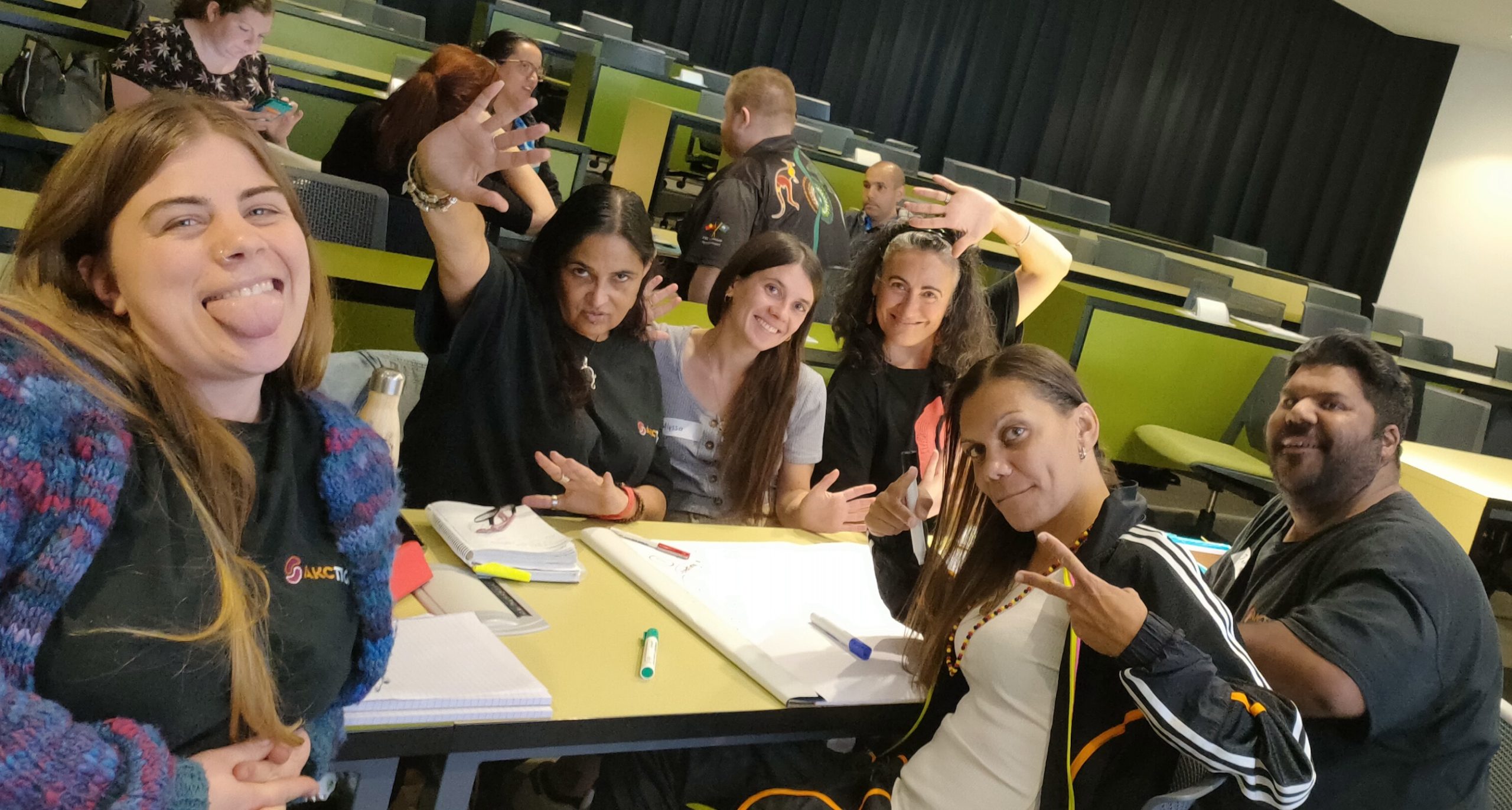 The series was conceptualised and sponsored by the AKction project, which had final say over the content.

We know this land here is Ngarrindjeri land

When we tread we should think of the Ngarrindjeri people

The Ngarrindjeri have sacred knowledge of the land

They are the first custodians of this land

We respect the Ngarrindjeri Elders of long ago

Our knowledge is strong

I’m glad you all are here