‘Drink Coke, Exercise More?’: where conflict of interest is a Real Thing 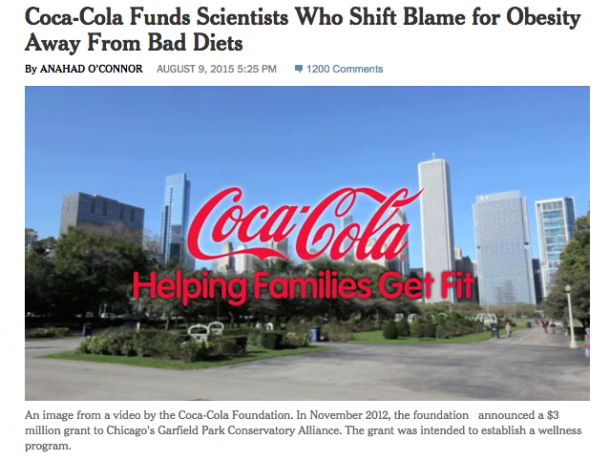 The New York Times prompted much public health concern this week with a report in its Well section that Coca-Cola “is backing a new ‘science-based’ solution to the obesity crisis: to maintain a healthy weight, get more exercise and worry less about cutting calories.” It said:

“The beverage giant has teamed up with influential scientists who are advancing this message in medical journals, at conferences and through social media. To help the scientists get the word out, Coke has provided financial and logistical support to a new nonprofit organisation called the Global Energy Balance Network, which promotes the argument that weight-conscious Americans are overly fixated on how much they eat and drink while not paying enough attention to exercise.”

The article said the group’s website had omitted mention of Coca-Cola’s backing until Dr. Yoni Freedhoff, an obesity expert at the University of Ottawa, wrote to inquire about its funding. That had now been “corrected” (see pic below).

Amanda Lee, Professor of nutrition and public health at the Queensland University of Technology tweeted a link to a list of the experts on the Global Energy Balance Network (GEBN) – which includes Australia’s Professor Wendy Brown, Director of the Centre for Research on Exercise, Physical Activity and Health at the University of Queensland. Brown was this week interviewed on Radio National’s Life Matters about exercise.

Asked by Croakey for a comment, Professor Brown said the New York Times article was based on “inaccurate information” and referred to this statement from GEBN president Jim Hill.

At no time has GEBN taken any position that suggests that sugar sweetened beverages do not contribute to energy imbalance – in fact several of Dr Hill’s intervention studies have shown positive changes in getting children and adults to choose healthier options.  Similarly, Prof (Arne) Astrup’s work includes lots of papers which point out the ill effects of consuming too much sugar.

Of course I appreciate the concerns that have been raised  –  but my membership of the GEBN executive is an honorary one – I do not receive any royalties – we are a network of scientists who have just started to work together and we haven’t actually done any research as a group yet.  To date my research has focussed mostly on promoting physical activity and I always provide a declaration of funding sources in all my publications (as per usual scientific practice).

It would be good if your piece could provide an accurate reflection of the facts – the funds provided by Coca Cola and others to support the formation of the GEBN will be used to support a rigorous programme of research – (as would be the case for any other public-private research partnership).  This will take some time to develop – and neither Coca Cola nor any other funder will have any say whatsoever in any aspect of the research process.

See some of the criticism on Twitter over the news about GEBN’s funding: 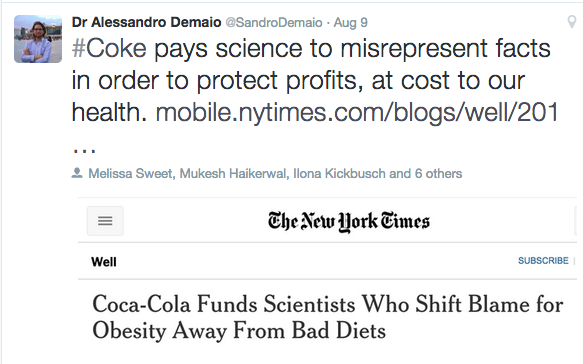 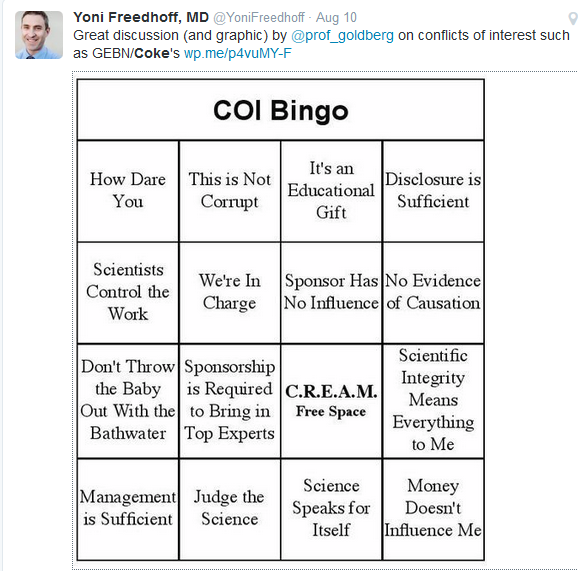 An article in Time noted an earlier Mixify campaign launched by the makers of Coca-Cola, Dr Pepper and Pepsi, along with the American Beverage Association, that “encourages young soft drink consumers to “mixify” their balance of sugared drinks and exercise, giving license to indulge more if they’re more active.” Of the GEBN funding, it said:

What’s particularly insidious about this new spotlight on exercise and energy balance is that it’s good medical advice that’s being promoted in a misleading and potentially harmful way.

In this article in The Guardian, Marion Nestle, Professor of nutrition, food studies and public health at New York University says the soft drink industry is invoking “elements of the tobacco industry’s classic playbook: cast doubt on the science, discredit critics, invoke nanny statism and attribute obesity to personal irresponsibility.”

Coca-Cola has said it was dismayed to read the New York Times’s “inaccurate portrayal’ of the company and its support of GEBN. Coke’s Chief Technical Officer Dr Ed Hays said in a statement:

The story claimed Coke is funding scientific research to convince people that diets don’t matter – only exercise. In fact, that is the complete opposite of our approach to business and well-being and nothing could be further from the truth.

Also worth reading in the midst of this: this Herald Sun ($) report about a hospital trial that saw high-sugar soft drinks hidden from public view drove people to buy healthier options.

And to close, from this USA Today report quoting one of Coke’s US executives: