Driving licences: why they are key to many Aboriginal health, justice and job issues

The Australian Law Reform Commission (ALRC) last week released a Discussion Paper ahead of a second round of stakeholder consultations on its inquiry, ordered last year by Attorney General Brandis in the wake of the Don Dale scandal, into the over-representation of Aboriginal and Torres Strait Islander people in Australian prisons.

As Guardian Australia outlines in this report, among many other measures, it proposes that states and territories end the practice of jailing for fines, saying it “results in punishment disproportionate to the offending conduct, and contradicts the principle of imprisonment ‘as a last resort’.”

The ALRC says it has conducted more than 100 consultations to date for the Inquiry which have informed the development of the questions and proposals that it has put out for discussion in the paper. Submissions are due by 4 September, with the final report to be presented to the Attorney General by 22 December.

The Discussion Paper has a big focus on the impact of fines on Aboriginal and Torres Strait Islander people, where default can lead to the loss of a driver’s licence which can then become a pathway to prison. It notes that driver licences can be suspended even where the originating fine was unrelated to driving, saying it had heard, for example, of Aboriginal and Torres Strait Islander people caught fishing without a permit which resulted in driver licence suspension. It said:

“The ALRC has been told that some Aboriginal and Torres Strait Islander peoples face particular difficulties relevant to remoteness and transiency that can make them highly susceptible to licence suspension for fine default.”

In the very timely latest edition of JournalWatch below, Dr Melissa Stoneham from the Public Health Advocacy Institute of Western Australia, discusses the findings of recent research on addressing the barriers to driver licensing for Aboriginal people in New South Wales and South Australia. It points to many structural barriers, including that many successful licensing support and driver education courses targeting Aboriginal people have been closed due to lack of funding.

In November 2011, the Public Health Advocacy Institute of WA (PHAIWA) released our first West Australian Indigenous Storybook, which was the start of a journey to showcase the many positive stories that occur in Aboriginal communities. One of the stories within this first book talked about the high percentage of clients in the Broome Regional Prison who were there due to a driver-related offence including driving under the influence, driving unlicensed or driving under a ban.

One of the issues associated with this was that, upon release, many offenders did not have a means of transport. The purpose of the story was to talk about the ‘Life Cycle’ project that targeted pre-release offenders and provided them with skills on how to recondition an abandoned bicycle. The idea included presenting each prisoner, once released, with a bike to ensure they had access to much needed transport.  Now, not all community roads are suitable for bicycles and sometimes the wet season makes it almost impossible to ride a bike, but the general principle is a good one.

Having access to transport, whether this be a private vehicle, a bike or public transport is something many of us take for granted. But for Aboriginal and Torres Strait Islander people in some parts of Australia, accessing public transport and getting and retaining a driver’s licence can be a major challenge.

JIn this month’s JournalWatch, I am reviewing an article which was published in the Australian and New Zealand Journal of Public Health called “Addressing the barriers to driver licensing for Aboriginal people in New South Wales and South Australia.”

Led by Kathleen Clapham from the Australian Health Services Research Institute at the University of Wollongong, the article used qualitative data collected over a four-month period in 2013 from interviews with Aboriginal and non-Aboriginal stakeholders (n=31) and 11 focus groups with Aboriginal participants (n=46).

The research reported on how barriers to obtaining a driver licence were being addressed in four urban and regional Aboriginal communities: Redfern and Griffith in New South Wales, and Ceduna and Port Lincoln in South Australia.

The stakeholders were classified into a range of agencies including licensing specific agencies, job service agencies, employment agencies, community development agencies, community brokerage agencies, justice systems – police and courts, and state government licensing authorities. The purpose of these interviews was to ascertain what programs were operating in each site to identify strengths and gaps in programs, funding and responsiveness to community need. All data were coded by themes and allowed for comparison between community member and stakeholder perspectives.

Not only would this lack of access be frustrating but it also impacts on health and social inclusion or lack thereof. Separate to this study, a researcher in the Pilbara region of Western Australia identified how access to culture is impacted by being unable to access transport, including the need to travel for lore business, funerals, hunting and to visit family. Transport is essential for employment, schooling, accessing food, health, cultural and other services and is often a means of escape.

This is particularly so in more remote areas. Let’s take one example. If you lived in the small and remote community of Warakurna, you would need to drive 331 kilometres on unsealed roads to get to Yulara (Uluru) or 781 kilometres to reach Alice Springs.

Barriers to gaining a licence

So what does prevent Aboriginal people from gaining a driving licence and how does not having a driver licence affect the Aboriginal community?

A range of structural issues are involved. These include a lack of sufficient identification such as a birth certificate to prove identity. Lower literacy and the fact that English is often not a first language is a further constricting factor.  The protracted, bureaucratic licensing process, the introduction of graduated licensing and the need to access technology which is not available to all Indigenous people are additional barriers. The cost of obtaining a licence was also seen as a barrier with one community member stating that “I have a job but because I don’t really get that much so $67 is a lot for me.”

Some of the impacts of under-licensing for Aboriginal people include unsafe transport choices such as overcrowding of vehicles, riding in utility trays and driving unlicensed.

Intersections with the justice system were also raised in the research, with having a state debt due to non-payment of fines frequently cited as a reason for why Aboriginal people were unable to obtain or had lost a licence.

The authors were able to identify some future options to address the barriers to driver licensing, particularly through the stakeholder data.

All stakeholders were able to cite numerous examples of successful licensing support and driver education courses targeting Aboriginal people, but many of these services had been closed due to lack of funding. The re-initiation of these types of culturally sensitive courses was seen as a priority action, as was the establishment of government licensing services in remote communities. Some legal stakeholders suggested that providing driver training while people are in custody for disqualification is a potential solution as people in custody have limited access to alcohol and other drugs.

The research found the most frequent suggestions from stakeholders about how to address local Aboriginal licensing issues were:

A quick scan of existing driver licence initiatives for Aboriginal people identified a couple of options including the New South Wales Government offering 1,000 free places on the Safer Drivers Course each year to help young learner drivers from disadvantaged backgrounds and Aboriginal communities. The course helps young drivers on their L-plates prepare for driving solo when they graduate to provisional licences, and teaches them how to reduce road risks and develop safe driving behaviour. 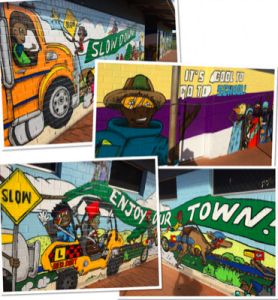 In the Ngarliyarndu Bindirri Aboriginal Corporation (NBAC) located in Roebourne, the Red Dirt Driving Academy employs local mentors to teach local people how to drive safely and retain their licences, with support from Elders. Since 2011 the Academy has been overwhelmed by demand, and has recently welcomed the nearby regional prison authority into the program. The town also has a new road safety mural (featured, right).

Whatever the answer, it is pretty clear we need greater investment in end-to-end licensing support programs for Aboriginal and Torres Strait Islander people, allowing them to more readily gain and retain their driver licence in their local communities and, where possible, with local mentors. The broad array of structural and community barriers have been identified in articles such as the one reviewed here, and it is now time to use research findings such as these to make it easier and safer for Aboriginal people to get their drivers license.

PrevPreviousCroakeyGo: A Romanian idyl, Mt Blanc hiking, cycling the Danube, and pressing the flesh for public health
NextLessons for Australia in US responses to an opioid epidemicNext