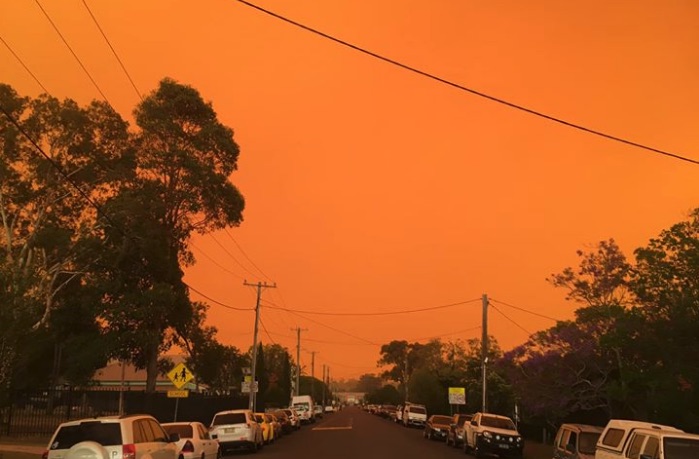 During catastrophic fire conditions, some timely questions for governments on climate policy

Introduction by Croakey: As horrendous bushfires wreak havoc over vast areas of NSW and Queensland, and communities brace for unprecedented fire conditions in coming days, it’s perhaps not surprising the Prime Minister and NSW Premier are ducking questions on the climate crisis.

As health promotion researcher Carl Heslop tweeted (see below), comments such as “Now is not the time to talk about this…Thoughts and prayers…What we need to deal with now is the families…We shouldn’t politicise this issue…” are straight out of the National Rifle Association’s playbook in the aftermath of a shooting tragedy. 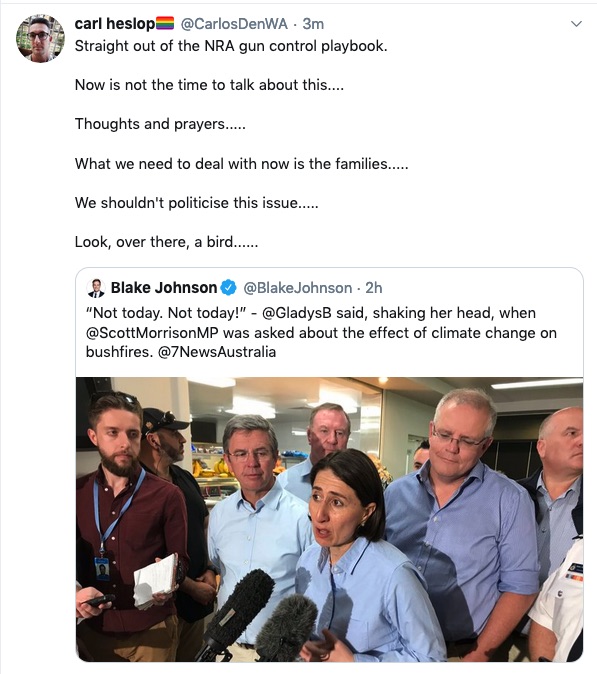 Now, however, is exactly the time to be asking pointed questions about governments’ responsibility to address the climate crisis and to ensure services are properly equipped and funded to respond in the immediate and longer-term aftermath of these traumatic events.

In that vein, we publish below a letter from Dr Patrick Harris, president of the NSW branch of the Public Health Association of Australia, urging members to write to their state MPs to protest planned changes in NSW that would weaken the public interest in planning laws, and “preference the coal industry over and above the public interest and health”.

On a related note, now is also the time for questions to be raised about Health Minister Greg Hunt’s failure to develop a national climate and health strategy.

The framework drafted in 2017 by health and medical groups had a section on emergency and disaster preparedness that stated: “Protecting the health and well-being of communities from the impacts of these events requires building the capacity of health and emergency services to identify vulnerabilities and to prepare and adequately respond.”

Earlier this year the Public Health Association of Australia NSW Branch Executive (PHAA) asked members for feedback on issues to progress over the next two years.

Overwhelmingly you told us that Climate Change is the number one issue of concern. We have established a ‘climate crisis and health’ subcommittee and are developing strategies to advocate for public health. However, an immediate threat to climate change mitigation has arisen in New South Wales and we would like you to consider writing to your local member to highlight your concerns.

What is the emerging threat?

We have attached a brief developed by the NSW Environmental Defenders Office which provides detailed information.

In summary: recently, several planning applications about coal mines in Rocky Hill and Bylong in NSW have not been approved. These decisions have cited downstream effects of climate change as the reason to knock back the development of new coal mines. In response, it is anticipated the NSW Parliament will debate changes to NSW Planning laws removing the requirement to consider ‘downstream’ carbon emissions, on the 12th of November.

Simultaneously, there is a review of the Independent Planning Commission’s (IPC) role in approving contentious state-significant infrastructure projects. The IPC was established in response to persistent concerns about political corruption. Changes reducing independence of decision makers are likely to re-open pro-development corruption perceptions.

The PHAA National Office, NSW Branch executive and Ecology and Environment SIG [Special Interest Group] are extremely concerned that the proposed new clauses and reforms will remove the ability of current legislation to protect of human health and ecosystems wellbeing.

In addition, the changes to the IPC will have a detrimental influence on the functioning of the NSW Planning system and its role in protecting the public interest, which is fundamental to public health now and for future generations. Essentially these reforms unfairly tip the balance of considerations toward the international coal and fossil fuel industries and against health, social and environmental considerations, and renewable and clean energy alternatives.

How can you help?

We ask you, to sign and send the attached letter to your local NSW member of parliament before the 12th November. You can find the name and contact details (email) of your local member via the NSW Parliament website here https://www.parliament.nsw.gov.au/members/Pages/all-members.aspx.

In addition to letters from individual PHAA members to local NSW members, the NSW branch and National Office are sending a letter to the Premier and other concerned members of parliament. We have also formed an alliance with various environmental groups (e.g. Lock the Gate and the Environmental Defenders Office) to actively voice our opposition to these changes.

If you would like to be involved in NSW Branch PHAA activities related to the climate crisis or if you have any question related to this emerging threat, please contact me [via the University of Sydney email]. 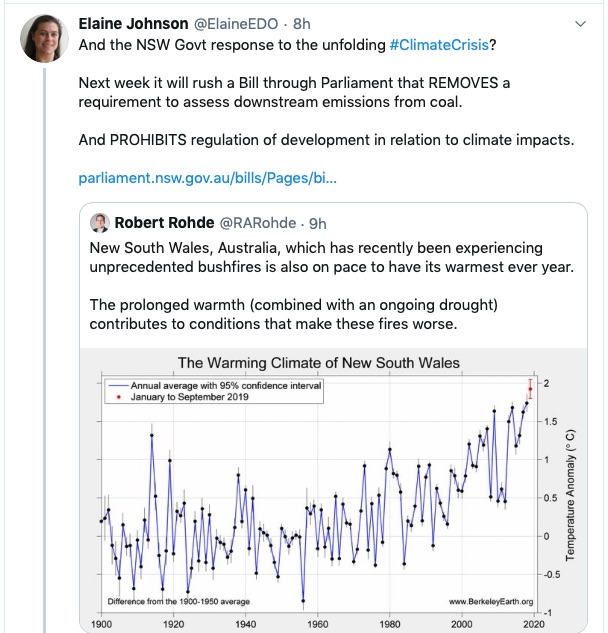 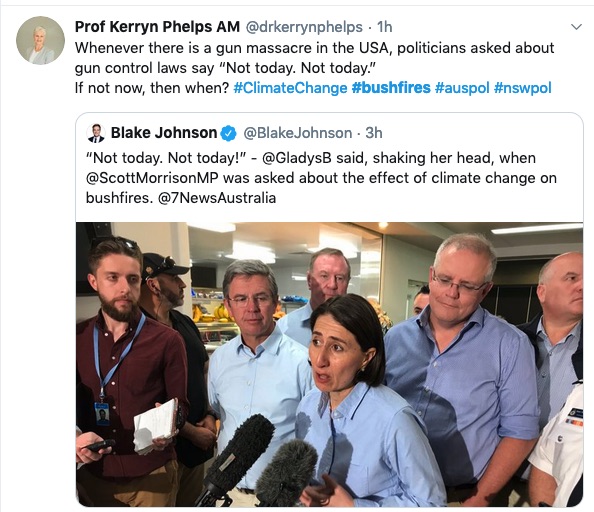 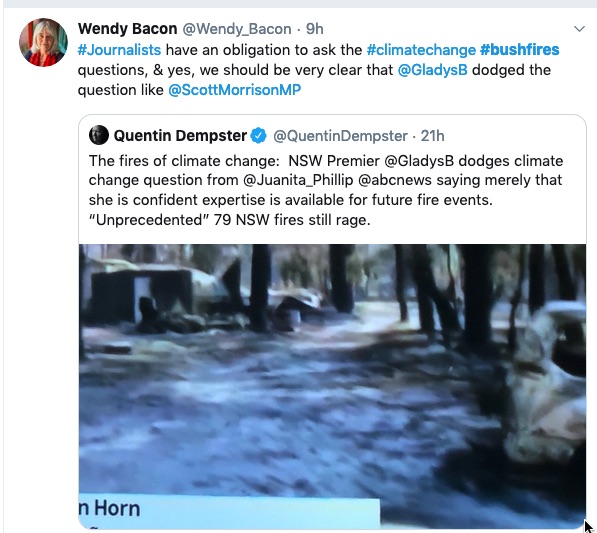 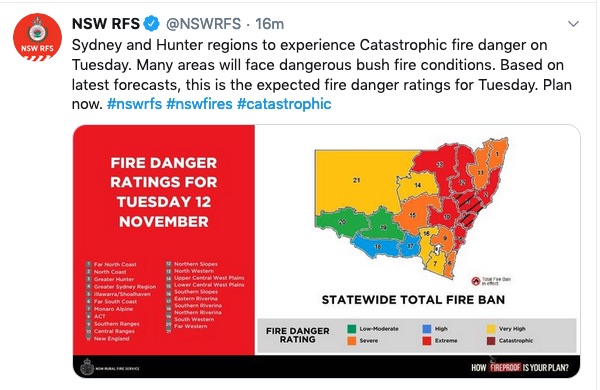 On 13 November, this post was updated with the tweets below from 12 November: 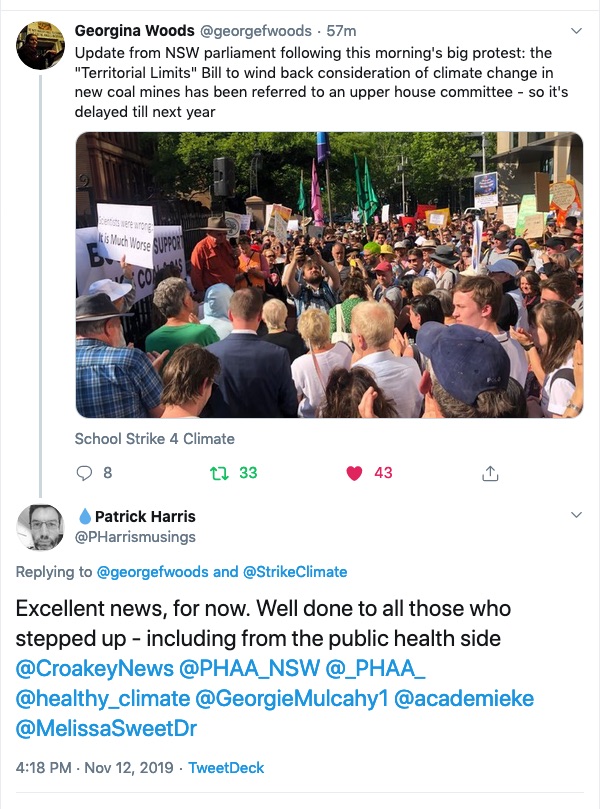