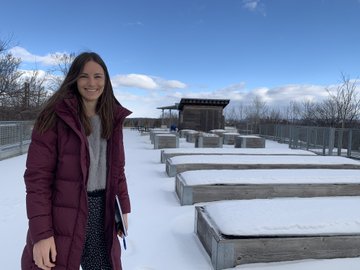 Dietician Dr Jorja Collins checks out a rooftop garden at the University of Vermont Medical Centre, where she is tweeting about her Churchill Fellowship into environmentally sustainable hospital food services

Eating Green: Good for health, hospitals, communities and the planet

From hospital boiler-rooms to chicken farms, and plenty of #foodporn in between, Jorja’s week offered some fascinating insights into the importance of delicious, nutritious, locally and sustainably grown hospital menus for patients, their communities and the planet. We’ve attempted to capture the flavour below. 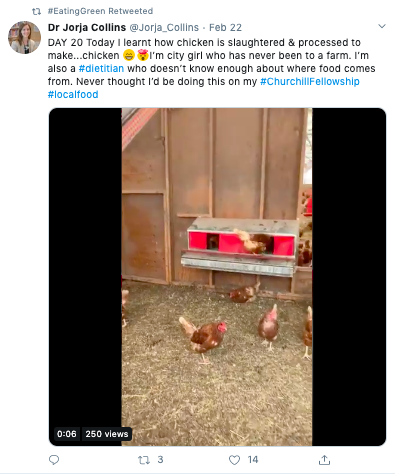 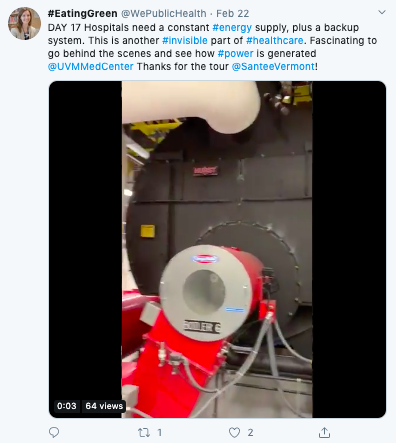 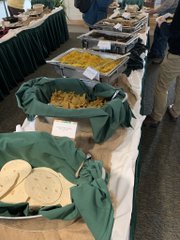 Meanwhile, Croakey readers can follow this week’s @WePublicHealth guest tweeter: @croakeynews editor @markragg, who will be tweeting on women’s cricket and #WomenInSport as the ICC T20 Women’s World Cup continues in Perth.

Feeding a hospital full of people with varying dietary requirements and restrictions, staying for weeks or just a few hours, on a tight budget is a complex undertaking, explained Collins in her opening tweet from frosty Vermont, where it was an icy three below zero.

Different hospitals use different models (cook fresh, commissary, pre-plated) to get food on the table for patients, but there are some fundamental differences between hospital food services in Australia (outsourced) versus those in the US (in-house). 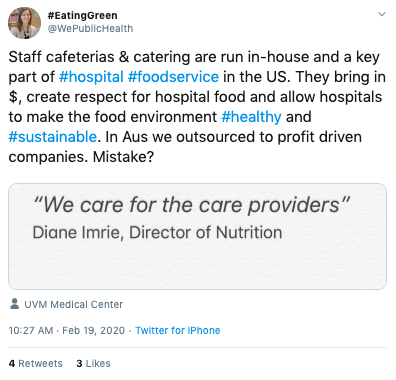 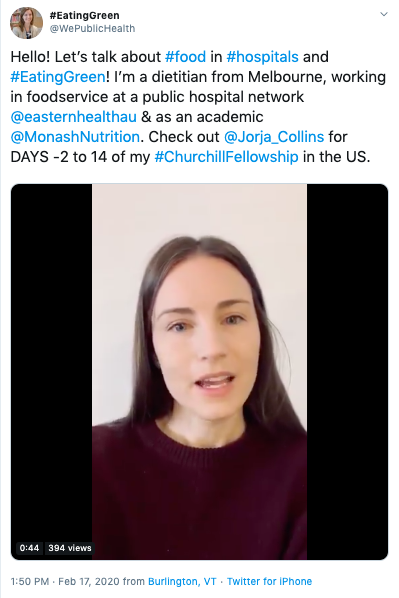 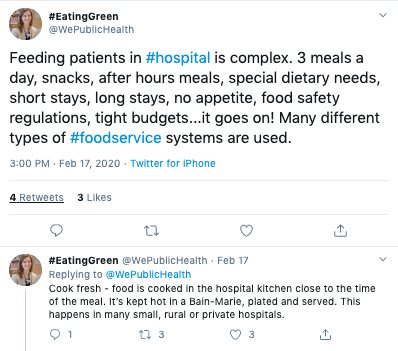 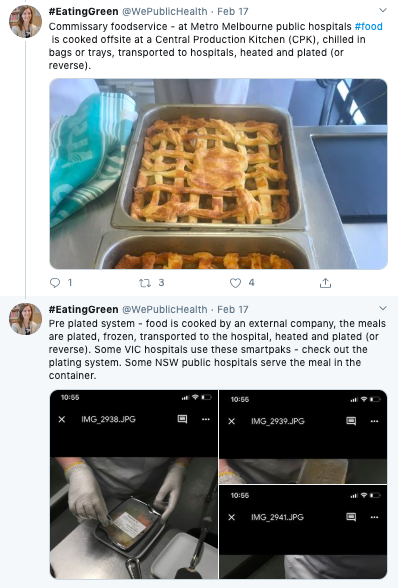 She quoted the UVMC’s director of nutrition, who said:

When I think about sustainability for patients, I think about waste. What can we do to make sure patients eat? Menu has to be tantalising and delicious and comforting. Otherwise what’s the point?”

The narrative around hospital food (“gross, crap, disgusting”) was pervasive, and resulted not only in missed nutritional opportunities but contributed to epic levels of waste.

Collins said almost a third of food on a patient’s tray was estimated, on average, to go to waste (some figures put it at double that), which was unforgivable when one third of hospital patients in the US and 42% in Australia were at risk of malnutrition.

As well as the food waste, huge amounts of plastic packaging, serving ware and portion controlled items went straight to landfill. At Melbourne’s Eastern Health, where she worked, Collins said 100% of food and packaging waste on a patient tray went to landfill, as a matter of time and cost.

By contrast, every health service she had visited in the United States sorted and separated waste. “They pay for the labour needed because they think recycling and composting are worth it”.

Instead of the old stereotypes, Collins said hospital food should be demystified so that patients, staff and visitors knew what was in it, who made it, where it came from, and what happened to food waste.

At the hospital in Vermont, she said they composted food waste, and patients (and staff) found it reassuring to know that their leftovers and scraps were not going to landfill.

She noted the importance of fit-for-purpose signage in ensuring waste was properly disposed of, with a compost service in Seattle reporting that hospitals had lower rates of contamination than restaurants, hotels and events due to signage giving clear examples of what items belonged in what bin.

“YES to therapeutic, made with love, appetising,” she said of the kind of food messages needed in hospitals. She shared some examples, below. 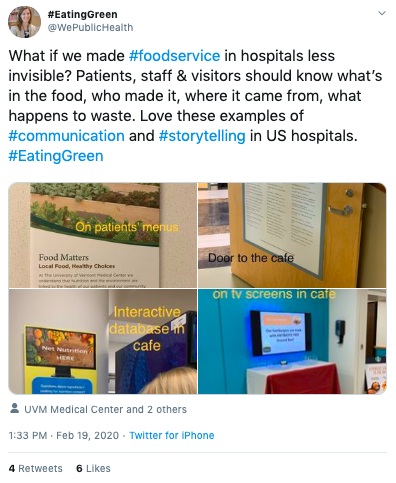 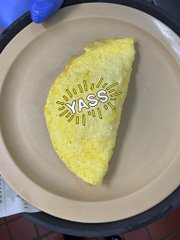 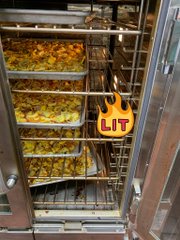 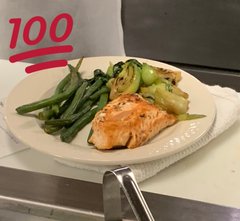 For Collins, a healthy hospital food service had five elements: 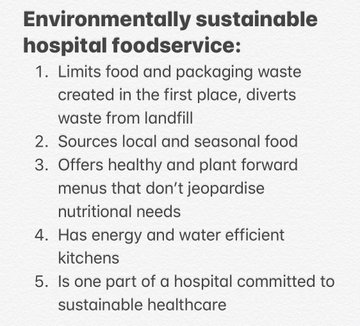 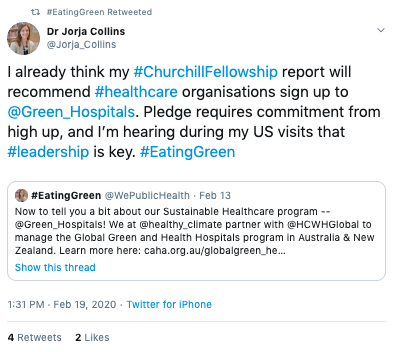 Technology had an important role to play in food service sustainability solutions, with Collins sharing several examples from her research in Australia and the US.

In Vermont, she said they capitalised on the local climate by using ‘freeair’ technology to cool fridges and coolrooms. They also used special superspeed ovens which utilised ventless technology to reduce carbon emissions and combined air/radiant heat and microwave cooking to dramatically reduce cooking time and energy use.

Another proven innovation was use of electronic food ordering systems, which reduced the time between patients requesting and receiving meals, saved paper and admin and, importantly, decreased food waste.

At Vermont, money saved through green initiatives went directly back into patient care, as well as to fund new green programs.

She shared some links showing that nutrition and food were poorly taught in the medical curriculum, and reflected on work at Monash showing that, while academic staff felt it was important to teach future health professionals about sustainability and climate change, they lacked knowledge and confidence, as well as adequate emphasis within the curriculum. 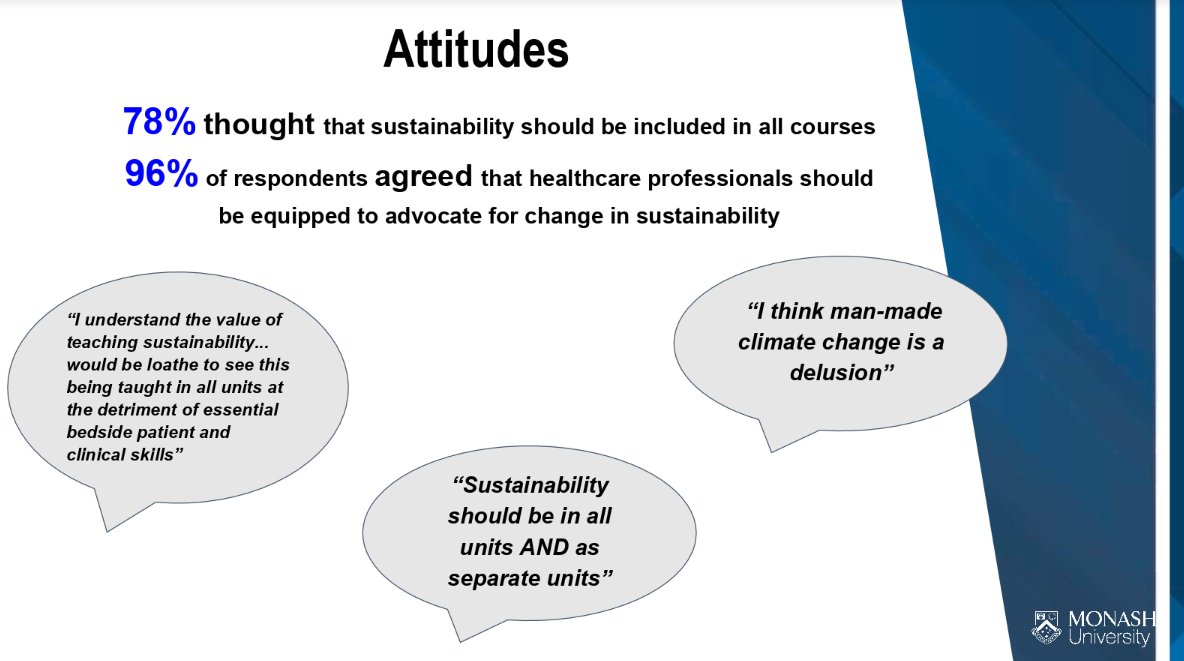 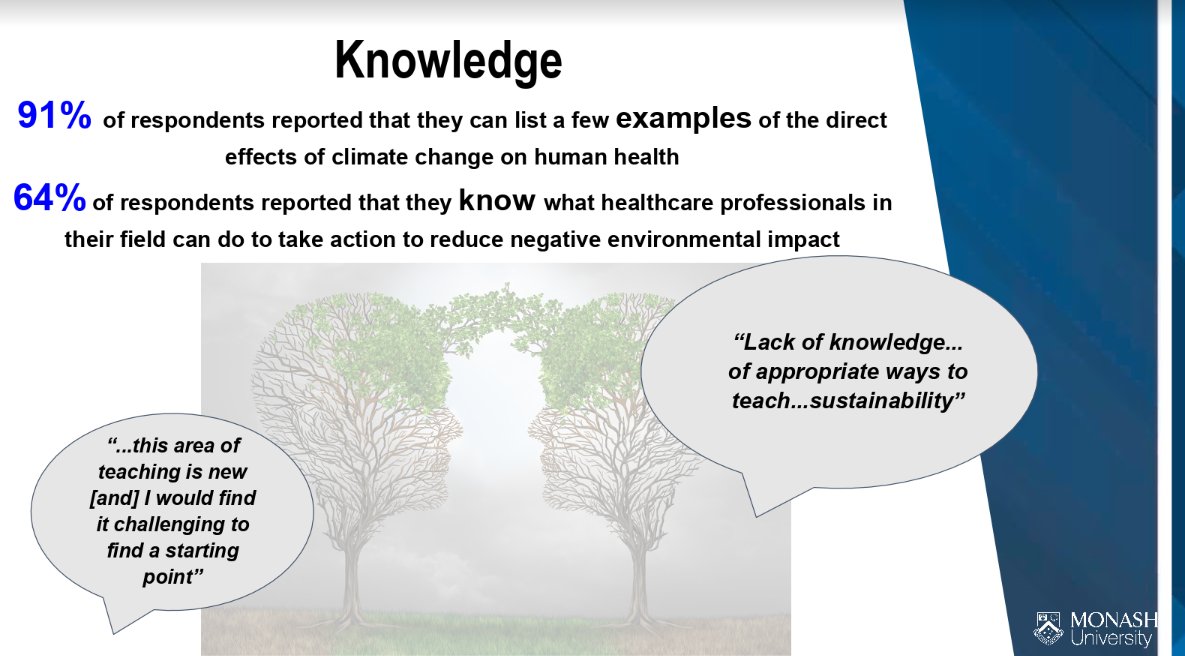 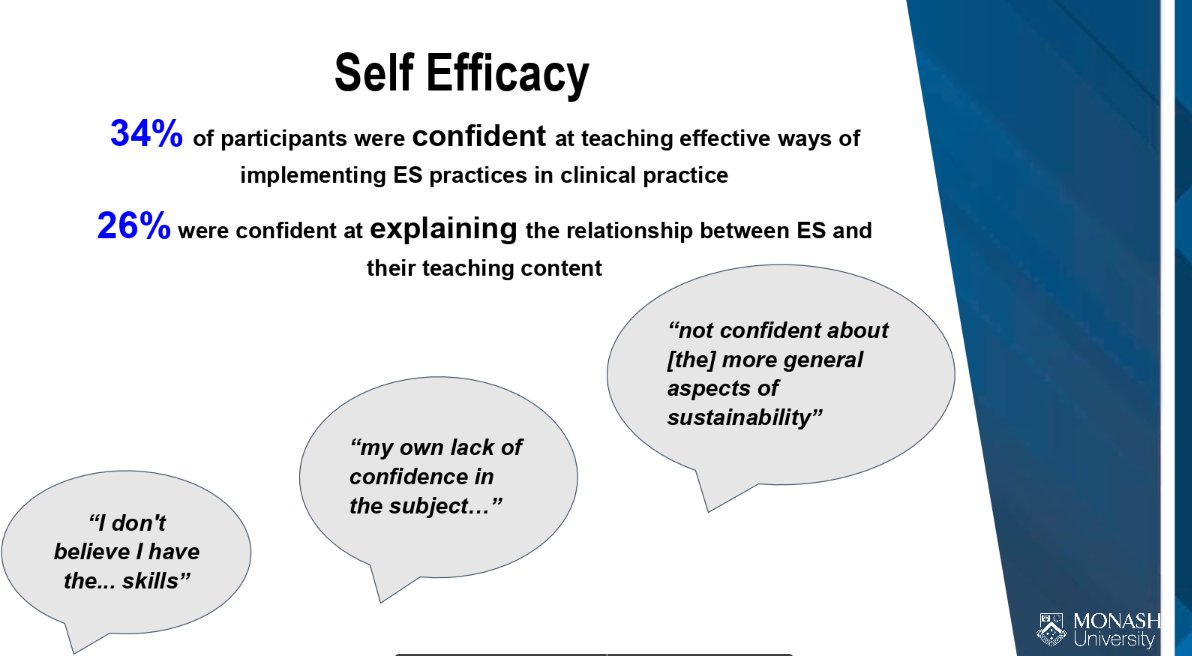 Perhaps most illuminating were the ways Collins showed the hospital food service intersecting with, and benefiting, local producers and the community.

She shared examples including a hospital rooftop garden that was linked to a pilot nutrition-exercise program, and also served as an educational tool and safe space; local farmers brokering direct with the hospital to buy their meat; and the establishment of a local ‘food hub’ where small and medium enterprises could get access to the hospital as a customer.

The hospital itself hosts a Farmer’s Market once a week (images below) and also runs a ‘culinary medicine’ program which runs healthy cooking demonstrations for corporate and community groups and the pain clinic. 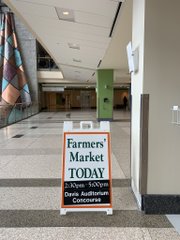 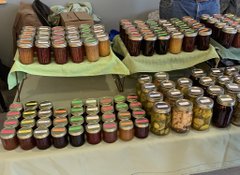 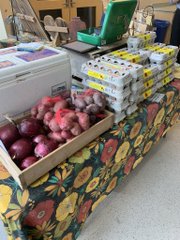 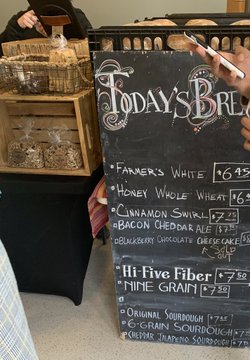 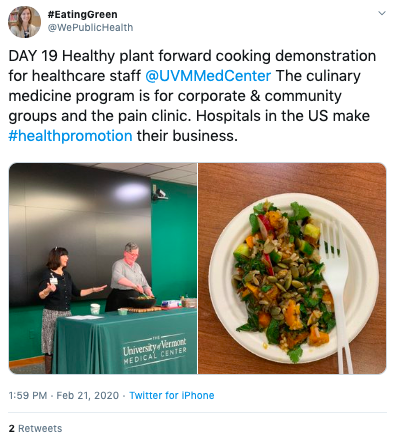 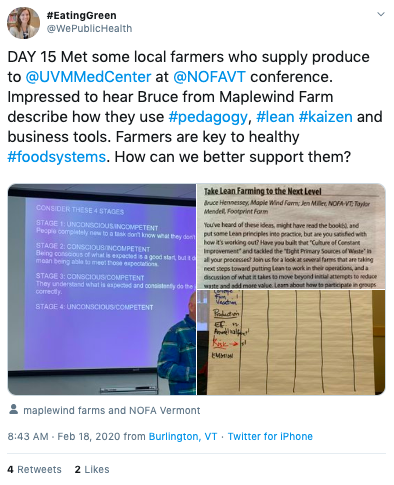 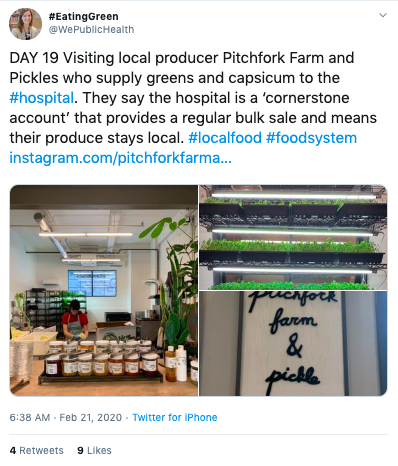 Collins said the ‘Golden Egg’ of hospital food service was the cook fresh, room service model. Not only did it reduce plate waste and food costs, research showed it also increased patient satisfaction and intake. This video from the Mater Private Hospital in Brisbane explains how it works. 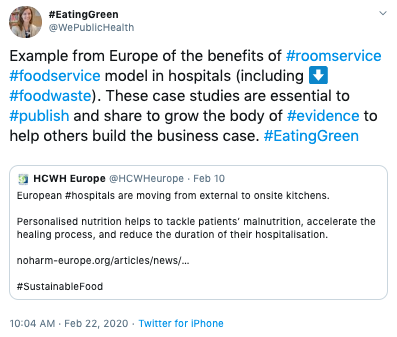 When it came to hospital food waste, she said composting was good but donation was better, sharing a successful collaboration between the Royal Melbourne Hospital and OzHarvest to repurpose surplus meals. 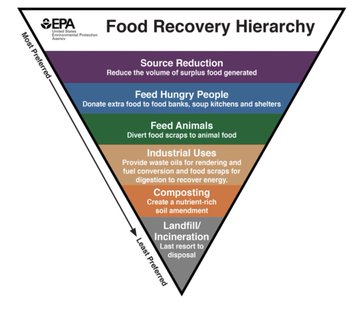 Looking ahead, closer to home, Collins said Victoria’s Department of Health and Human Services was currently undertaking an audit into making hospital and aged care meals more nutritious and locally produced, with new mandatory nutrition standards to be developed from the findings.

Thanks to Jorja for sharing her week with us. You can keep up with her travels at @jorja_collins. 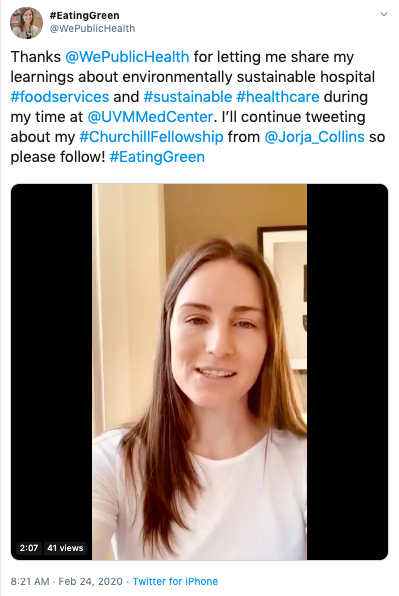 Bookmark this link to follow the contributions from @WePublicHealth guest tweeters during 2020.

PrevPreviousWhat the sports rorts scandal reminds us about health spending
NextGeneration Equality: Why feminism is more relevant than everNext