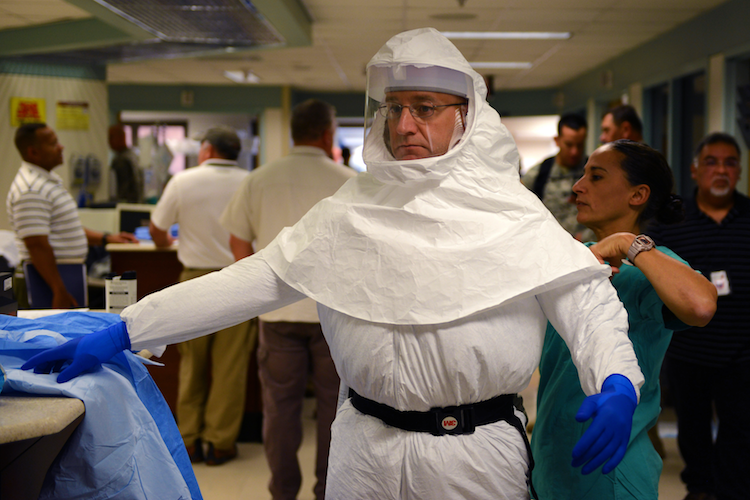 The 2014 Ebola outbreak in West Africa barely touched Australia but, when a possible case arose in Queensland, health authorities reassured the public that we were “well equipped to contain the disease”.

An interesting qualitative study published this week suggests that, at least for front-line clinical staff, such preparedness was lacking. Interviews with 21 Queensland doctors and nurses revealed uncertainty about their professional obligations, rights and clinical acuity.

The interviews also illuminated the sense that Ebola was not a problem for Australia until it touched another high income country. In the words of one participant “I just thought of it as an Africa thing…. Until I think there was some news coverage about someone going home to America … then it was [serious].”

Below the study’s authors, sociologist Professor Alex Broom and infectious diseases physician Dr Jennifer Broom discuss the ongoing problem of Ebola, and why the prevailing attitude of “othering” this disease will increase its global threat in the long run.

Of the potentially humanity-destroying infectious diseases to threaten our collective livelihoods the most worrying one in recent memory surely was the Ebola 2014 threat.

While Ebola never actually made its way to Australia, it resulted in considerable fear and anxiety, particularly amongst Australian health workers who would be the ones caring for patients with Ebola if any had presented. With reports of up to 90% mortality, Ebola was a hugely fear-inducing prospect for our frontline doctors and nurses. Our recent study published in the Journal of Sociology examines how unprepared, as it were, Australia really was for an Ebola case and the impact this lack of preparedness had on frontline healthcare staff.

But why it is that the Ebola threat came and went so quickly in 2014. As we know, Ebola didn’t actually come to Australia or indeed most OECD countries. And Liberia experienced a cluster of three confirmed cases as recently as November 2015. So, it didn’t really come or go at all, but the Western media sure acted like it did. We saw a frenzied storm of concern in late 2014, and now we hear virtually nothing about it, except for brief frights.

Why did our collective fear of Ebola dissipate so quickly in high income countries when Guinea, Sierra Leone and other affected areas of Africa continued to face endemic Ebola? It’s not like things have improved Ebola-wise, rather, they have progressively got worse.

In the first 20 years after the initial identification of Ebolavirus, only three outbreaks were documented – in the past two decades we have seen 20. The West African outbreak in 2014/15 was the largest outbreak in history, and the first Ebola epidemic. Things may be better for us in Australia, but the situation in Africa is still dire.

To provide some context, the ‘2014 Ebola outbreak’ actually started in December 2013, when a 2-year-old child died in the village of Meliandou. It then spread through the borders of Guinea, Liberia and Sierra Leone, resulting in an estimated 28,637 total cases and 11,315 deaths by the end of 2015. Over the course of the pandemic, Ebola spread to Mali, Nigeria, Senegal, and then to the United States, the UK, and Spain.

The international community got seriously worried when there was secondary spread of Ebola from Liberian national Thomas Duncan to Nina Pham, a US nurse in Texas.  Why was this particular moment so important? What of the 11,315 patient deaths (including 518 healthcare workers) in Africa? A combination of factors contribute to such expressions of fear, or indeed subsequent comfort, with the course of a pandemic like Ebola.

First, there is the global perception of human value. The life of a person from a high income country is often treated with more significance, produces greater memorialisation in times of tragedy, and a heightened need for action from the Western nations/press. Western lives simply hold greater perceived worth, even though no-one likes to say this.

This shapes the extent to which our Governments and press consider an outbreak worthy of ongoing attention, and provides some explanation as to why the ‘2014 Ebola threat’ was so fleeting . There is also a latent racism in responses to globalised outbreaks – just as there is in relation to terrorist events – and whilst this is not all about race (as people with different backgrounds live in the ‘west’ and ‘developing world’), there are certainly racial undertones to the global politics of human value.

Second, skewed thinking persists in terms of what is acceptable in high versus low income countries. For example, pandemics like Ebola produce anxiety or feelings of insecurity because of the assumption that such things shouldn’t happen the West. The reverse logic of ‘these things happen’ applies to developing countries. Neither of these arguments hold up with greater and faster flows of people across international borders meaning that infectious diseases resist our previous impermeable national boundaries.

We also have the capacity to develop safe practices around the care of Ebola patients and it is largely a matter of resource allocation to ensure that it is contained regardless of location. We in high income countries are not safe from Ebola and nor should those in low income countries just have to live with it.

Third, another potential factor, noted by a number of scholars, is a global climate of fear. Post 9/11 in particular, but for quite some time, there has been a preoccupation with securitisation, and the emerging priorities have been centred on self-protection, enhanced national security and border protection.

At the extreme end think Trump’s increasingly bizarre scare tactics regarding Mexicans or Muslims; who knows who will be the target next week. Although not alone in its foreign policies, Australia’s current border protection practices are also a good example, and so too is its ongoing winding back of international aid.

A global climate of fear and dread, including fear of an imagined and less significant other (think refugees, asylum seekers, or just those who are ‘non-Australians’), leads us to focus even more intently on looking after ourselves. Paradoxically, by not managing and supporting Ebola preparedness and action planning in Africa, we enhance the likelihood of future outbreaks which will inevitably “travel West”, so to speak. By not caring for the Other, we increase the threat to ourselves. And, as much as the CDC’s Zombie survival packs may help, a better strategy would be to deal with the problem at its source.

So no, Ebola is not ‘so 2014’, it’s an ongoing problem for Africa and will be in the future for the rest of the world, as outbreaks become more frequent and penetrate national borders.  The trial of a vaccine reflects progress, and while Ebola vaccines are likely to be effective eventually, outbreaks are still likely to occur in Africa. Ebola should thus be viewed as a case study from which we may learn lessons in cross-border infection management, rapid responses to epidemic threat, and the impact of geo-political issues in local and global responses.

Professor Alex Broom PhD is Professor of Sociology at the School of Social Sciences, the University of New South Wales. Follow him on twitter @BroomAlex

PrevPreviousIs a 5.6% increase in private health insurance premiums justified?
NextWould you like a Just Justice meme? Get one (or even three) here…Next