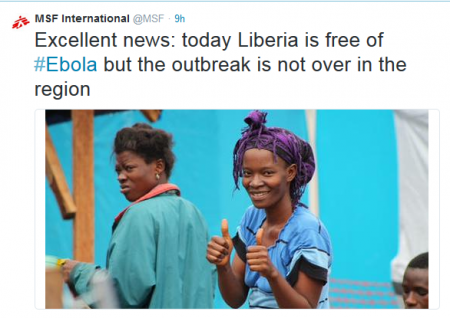 The World Health Organisation (WHO) last week declared Liberia free of Ebola virus transmission. “The outbreak of Ebola virus disease in Liberia is over.” it said in this statement.

However it warned that while it is confident that Liberia has interrupted transmission, outbreaks persist in neighbouring Guinea and Sierra Leone, creating a high risk that infected people may cross into Liberia over the region’s exceptionally porous borders.

“The government is fully aware of the need to remain on high alert and has the experience, capacity, and support from international partners to do so. WHO will maintain an enhanced staff presence in Liberia until the end of the year as the response transitions from outbreak control, to vigilance for imported cases, to the recovery of essential health services.”

Meanwhile, the WHO’s own much-criticised response to Ebola has been under scrutiny. It commissioned an independent panel of experts to investigate, which this week released its interim report, which found: “At present, WHO does not have the operational capacity or culture to deliver a full emergency public health response.” See some of the reporting on these findings.

In the post below, Rosalie Schultz and Colin Butler provide a timely backgrounder on the many factors contributing to this outbreak of the disease and conclude that the tragedy “can be seen as a predictable outcome of the four decade retreat from primary health care.” Noting that universal access to primary health care is “one of the most powerful social equalisers among all policy options”, they warn of the risks of further cuts in foreign aid in this week’s 2015-16 Federal Budget.

See also another recent Croakey long-read on the lessons, one year on, of the Ebola outbreak and, in the wake of his recent election as the new Greens leader in Australia, this report from Senator Richard Di Natale on his trip to West Africa last year to investigate Ebola responses. 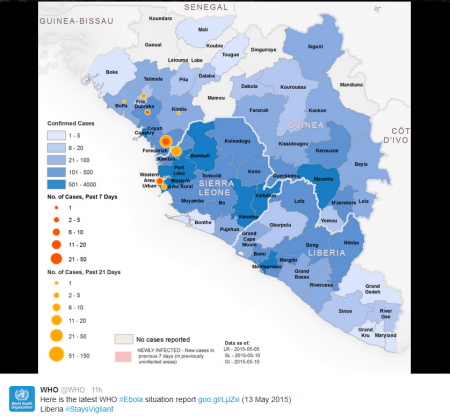 Sierra Leone is one of the poorest and most unequal countries in the world. Population is around 6 million, of whom 60 per cent have a monetary income of less than US$1.25 per day. Life expectancy is 48 years. Less than 10 per cent of its population have access to electricity, and there are only 9 vehicles per 1000 people (700 in Australia). Biomass is the most important source of fuel for 80 per cent of people: they have long burned their forests for subsistence. But the ferocity of the assault on the forest is increasing, both from local population increase and external predation.

Sierra Leone attracted global attention in 2014 as one of the three West African countries ravaged by an Ebola virus outbreak of unprecedented size and duration. This outbreak, first identified in late 2013, was belatedly declared a public health emergency of international concern in August 2014 after people had carried it to Nigeria and Mali, in turn infecting the local population, some of whom died. The fact that the Ebola outbreak threatened international peace and security was also recognised that month, and international responsibility for its response was transferred to the United Nations. Since then Ebola cases have briefly reached USA, Spain and UK through infected health care workers, with very limited secondary transmission.

Where did the Ebola virus come from?

The leading hypothesis is that bats can co-exist with Ebola virus. However, despite much circumstantial evidence (including the identification and prolonged tracing of bats that are antibody positive) this hypothesis is not quite proven. Ebola virus sometimes spreads to non-human primates, and it sometimes spreads to humans, with or without other primates being involved. Research and understanding of diseases, such as from Ebola virus, that primarily affect the poor are inadequate, and this may contribute to our inability to predict and prevent outbreaks.

Thirty four human outbreaks of Ebola virus disease have been documented in central Africa since first identification of the virus in 1976. Until the current outbreak there had been 2,407 known human cases of whom 1597 have died.  There was a small outbreak in Democratic Republic of Congo even during the major West African outbreak and this was managed and controlled as central African outbreaks always have been, with minimal international awareness.

The first reported Ebola virus case in the West African outbreak was a child in a village in Guinea who is presumed to have had direct or indirect contact with a bat. This village was close to borders with Sierra Leone and Liberia. He had direct contact with secondary cases, who spread disease to three other villages in Guinea.

In the forests of Guinea people of different ethnic groups live in small isolated villages and survive largely outside the monetary economy. They hold little economic power and are ‘unimportant’ in that measure to the national economy – let alone the rest of the world. Over recent decades their forests have been plundered, bringing an increasing number of people, both local and strangers, into contact with wild animals (“bushmeat”), including protein-rich bats, which are regarded as delicacies.

The Guinea forests border on Sierra Leone and Liberia, countries which have suffered prolonged and destructive civil wars in recent decades. In 2004, almost 60,000 refugees who have fled these conflicts were registered in Guinea. Their horrific flight only added to the ecological and economic burdens on the forests of Guinea. The formal refugee camps have now been dismantled but the region remains needy, with many development indicators retreating.

What led to the Ebola virus index case in the West African outbreak?

The two year old child index case was infected in December 2013, at the beginning of the dry season. Local stories report an exceptionally arid and prolonged dry season, arguably linked both to deforestation and climate change. Plausibly, these drier conditions influence both the viral load of stressed bats (as is thought the case for Hendra in Queensland) and perhaps the frequency of human contact with the Ebola reservoir. We are far from the only commentators to speculate that interconnected climatic, ecological, social and economic conditions enabled Ebola virus to flourish in this region.

People in these border regions of Guinea, Liberia and Sierra Leone are desperately poor, and travel widely seeking work and food. Families straddle these European-created national borders. Once the disease had a toehold it spread rapidly, transmitted through normal habits of tenderness: touching, holding, washing and sometimes kissing infected people, both sick and deceased. Cases multiplied when people presented at clinics which had no experience with Ebola virus disease, and were inadequately prepared and equipped to provide even standard infection control procedures.

Unlike in more sparsely populated Central Africa, Ebola virus escaped its forest origin in West Africa to reach towns and then national capitals. Whereas villages can be quarantined to stop spread of infection, it is much more difficult practically, socially and politically to quarantine cities. In overcrowded city slums where death was a common occurrence already from malaria, TB, HIV, childhood infections and pregnancy complications, the outbreak of Ebola virus disease ran uncontrolled during much of 2014.

The governments of Guinea, Liberia and Sierra Leone struggled as infected people crossed the highly porous borders between and within their three countries. Recognising both the danger and the inadequacy of the local response, Medicines Sans Frontiers (MSF) quickly called for a massive scaling-up of resources. It took several months, but the eventual response by WHO and the UN Security Council has been unprecedented, particularly US Aid which has pledged $126 million.

By January 2015, as result of this enormous effort, new case numbers had dramatically fallen; many observers felt the outlook was optimistic. As we write, no new cases have appeared in recent days, and there is hope the outbreak is over. It is critical that every last case is identified and isolated. While any human cases exist, the outbreak can re-emerge, especially if the virus gains access to an immunologically and culturally naïve sub-population. There are hopes (supported by additional funds and other resources) that a well-prepared and vigilant primary health care service can be developed.

Trade and travel bans which aim to limit the spread of Ebola virus disease have a role in outbreak control, as has been demonstrated in outbreaks in more sparsely populated regions. But in the case of the West African outbreak, millions of people would be disadvantaged by enforced 24/7 restrictions during the three week long Ebola virus disease incubation period. This duration would be required to ensure that there are no infected people yet to develop symptoms remaining in the community (who could thus be isolated and barrier nursed). However a three week lockdown would create such logistic and economic difficulty that it is not seriously considered. Even if it was, it would probably be impossible to enforce. As a result, WHO considers such bans in West Africa to be counterproductive.

Australia has attempted self-protection from Ebola by refusing visas to the very small number of citizens of the affected countries who can afford to travel here. Critics point out that such bans further isolate and stigmatise communities in desperate need of outside assistance, already facing economic collapse. Additional isolation further reduces the ability of countries to respond and increases the hardship their populations face. Likewise, overly zealous isolation of people returning from affected areas to wealthier counties can deter volunteers who might otherwise offer valuable service. Australia’s contribution of to the West African Ebola response was welcomed, and we also acknowledge Australia’s contribution to a clinical service through Aspen Medical.

The Ebola tragedy can be seen as a predictable outcome of the four decade retreat from primary health care. With wisdom, it could herald a resurgence in primary health care, after decades of the flawed pursuit of single charismatic diseases, too often at the expense of a more comprehensive strategy. For several decades, WHO has been in retreat, with its finances and prestige under assault by neoliberalism, that is by the conceit that unrestrained market forces are the best way to generate public goods, including health for all. A manifestation of this has been the tardiness of many powerful countries to adequately support and fund WHO. But neoliberalism, complacency, nepotism and corruption has also infected parts of the UN system. Certainly, WHO officials in West Africa were criticised for  their slow response.  WHO headquarters has shown evidence of recognising this, and have vowed to  reform.

A strengthening of primary education and health care will improve the essential capacities to detect and respond to health emergencies. These old-fashioned development priorities will enhance social stability and resilience to withstand shocks. Future shocks are likely, particularly those that result from global climate change, foisted by largely indifferent consumers in countries such as Australia on villagers such as those in Guinea, Liberia and Sierra Leone. Universal access to primary health care is one of the most powerful social equalisers among all policy options. The substantial cuts in Australian aid for sub Saharan Africa in recent years not only reflects poorly on our still wealthy nation, but may herald wider problems, not only for the poor in Africa, but for all.

Dr Rosalie Schultz is a public health physician and GP. She has a broad range of clinical and public health interests, underpinned by a concern about social justice in Australia and globally. She undertook a 6 week placement at the Aspen Medical Ebola Treatment Centre in Hastings, Sierra Leone from December 2014, with a team of Australian, New Zealand and Sierra Leone doctors, nurses, environmental health officers and support staff.

Colin Butler is Professor of Public Health at the University of Canberra and a visiting Fellow at the National Centre for Epidemiology & Population health, Australian National University. He is co-founder of the NGO BODHI (Benevolent Organisation for Development, Health and Insight). His work lies at the intersection of sustainability, globalisation and health.

As yet another extreme weather event hits hard, where is the health response?